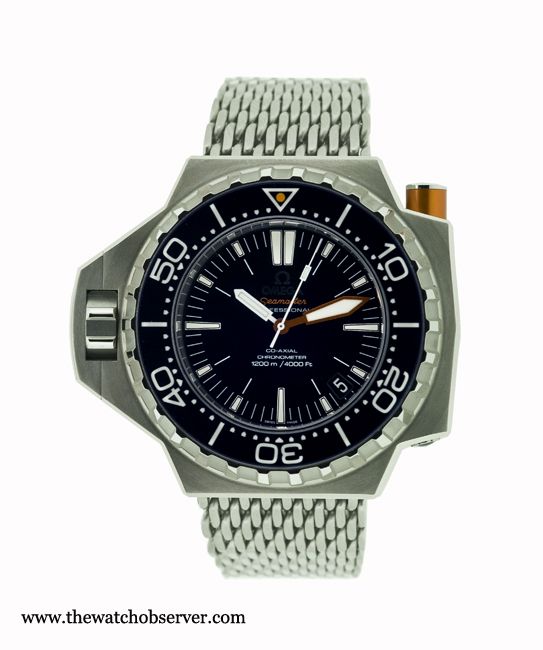 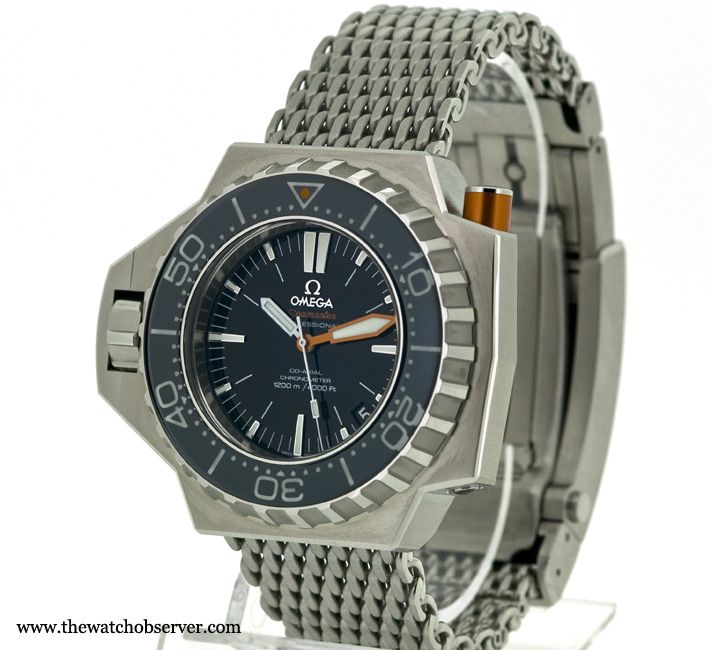 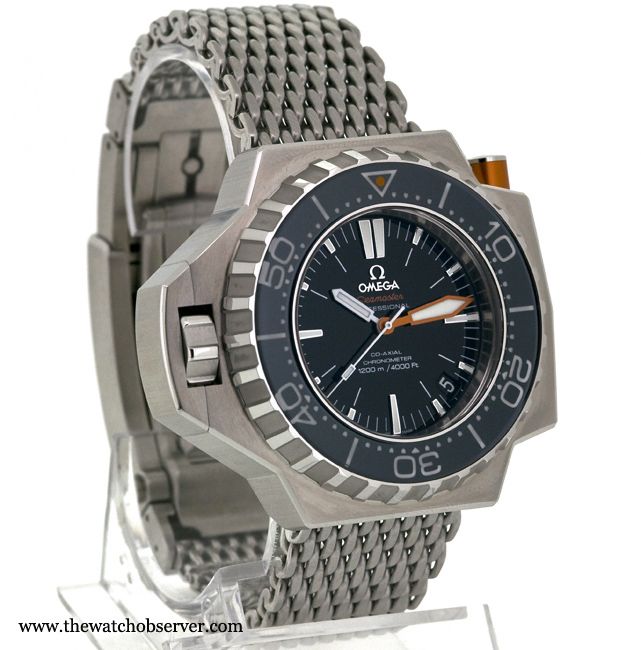 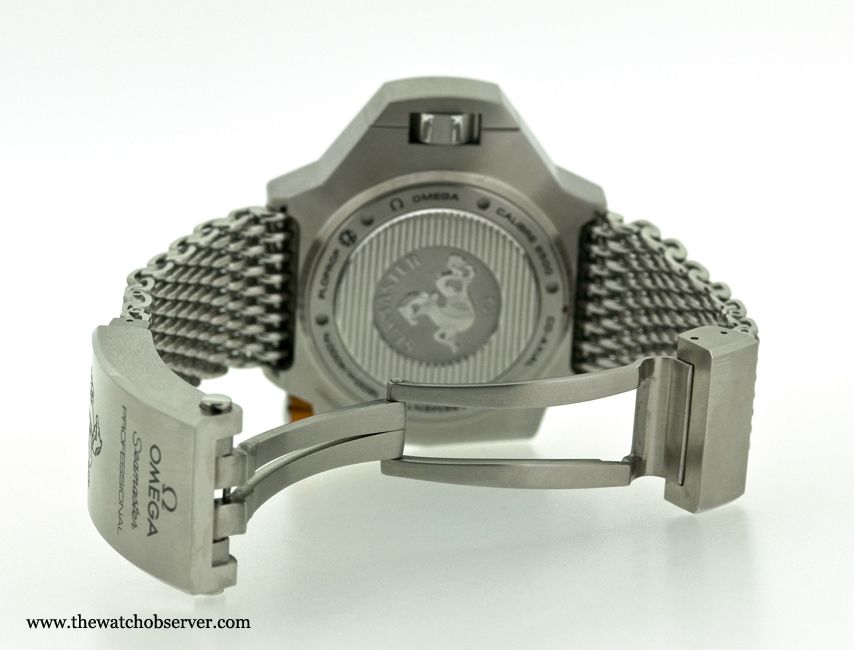 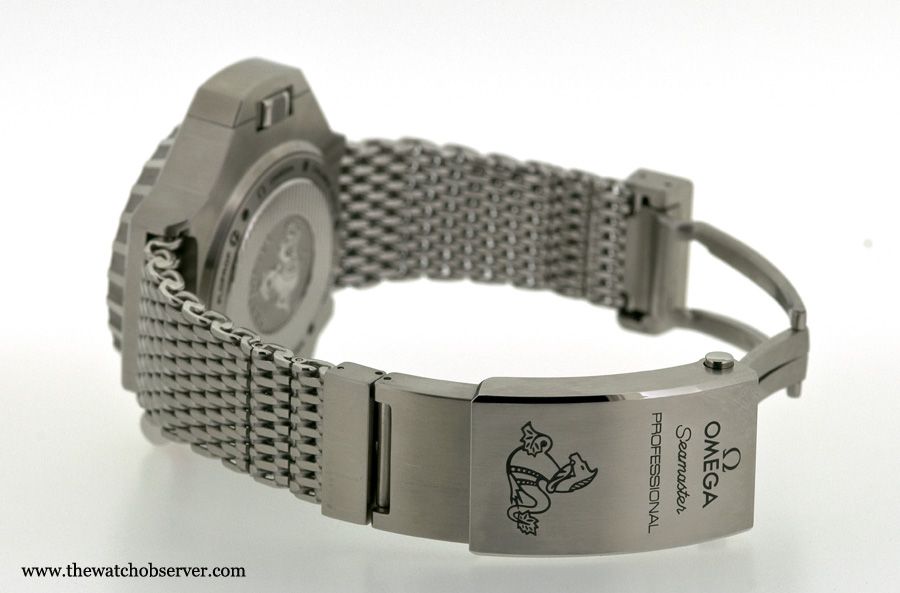 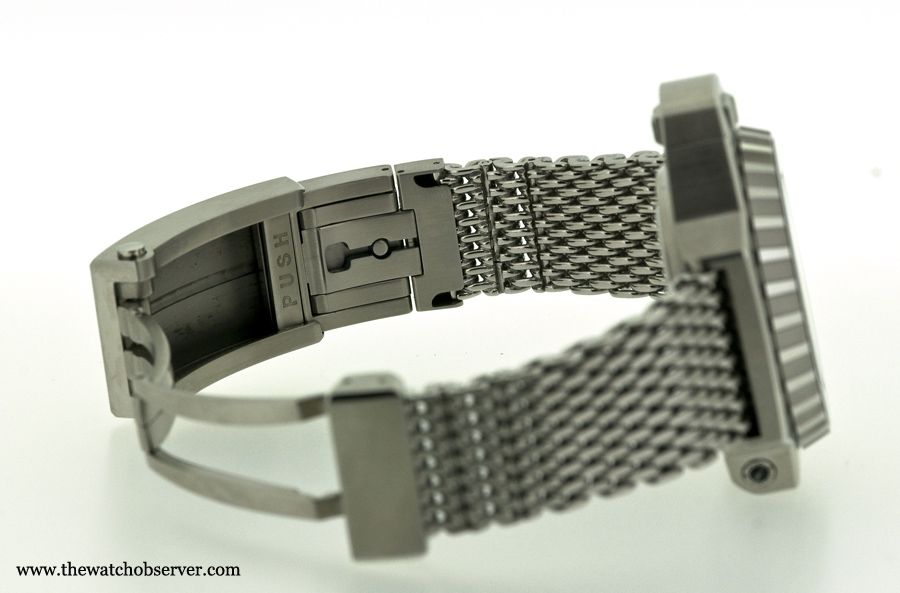 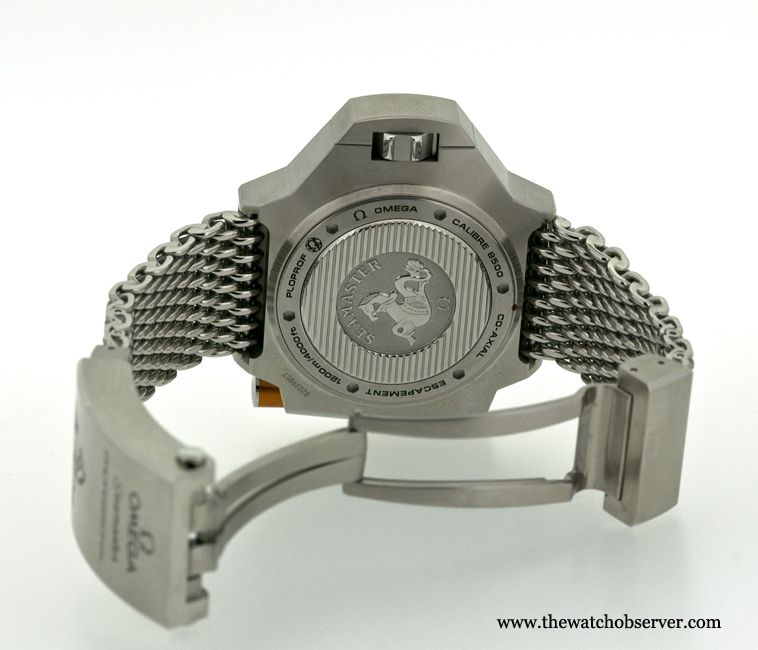 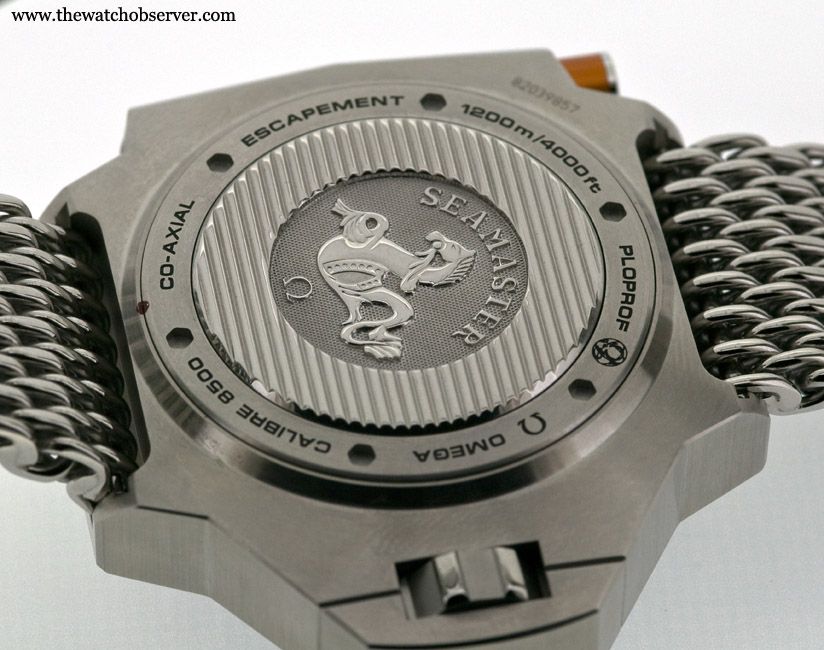 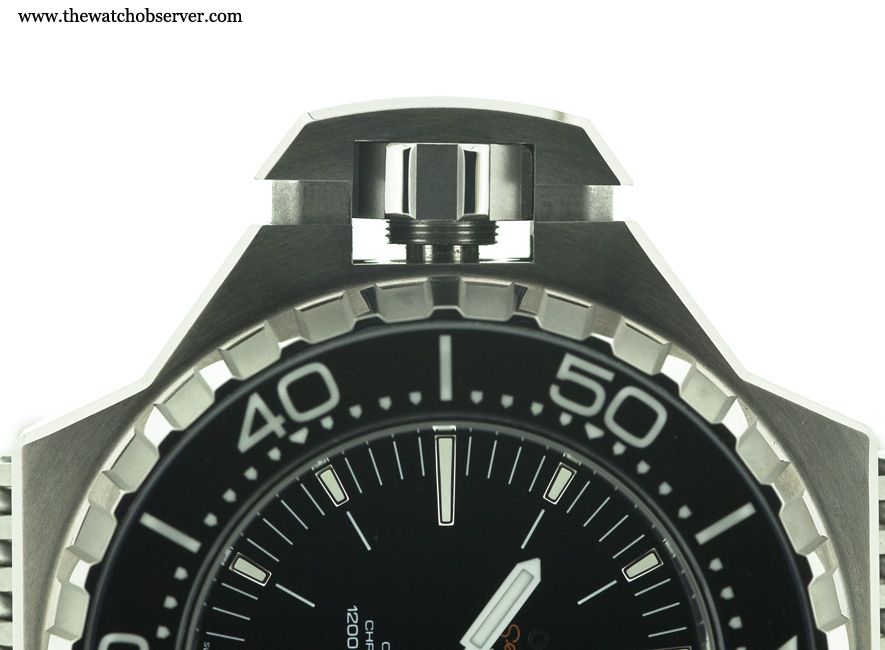 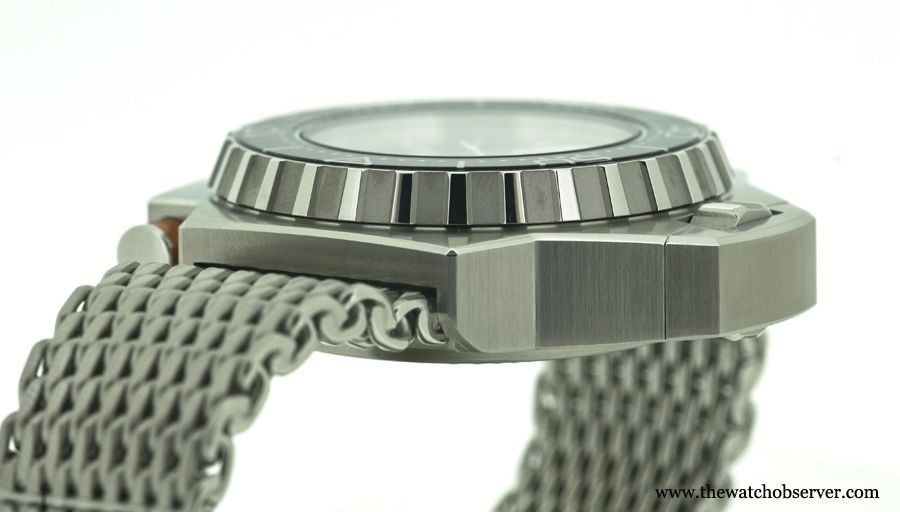 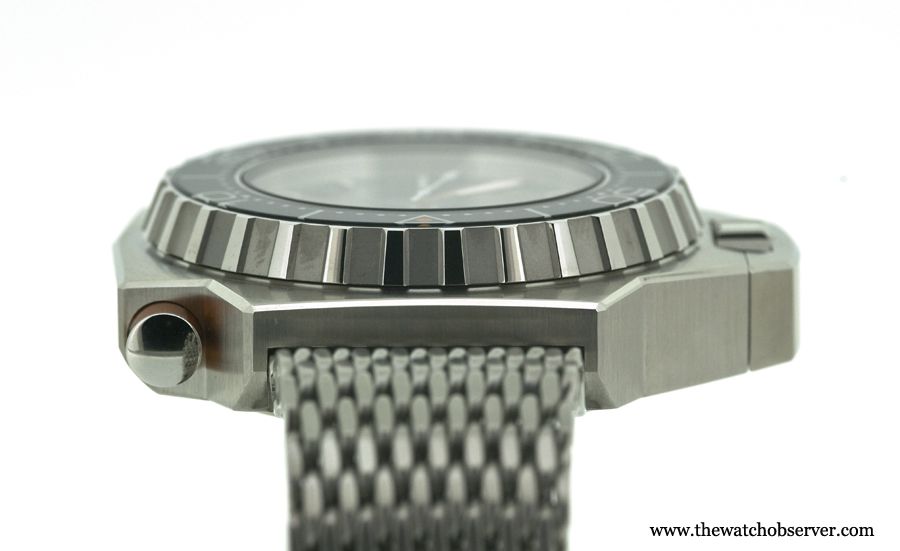 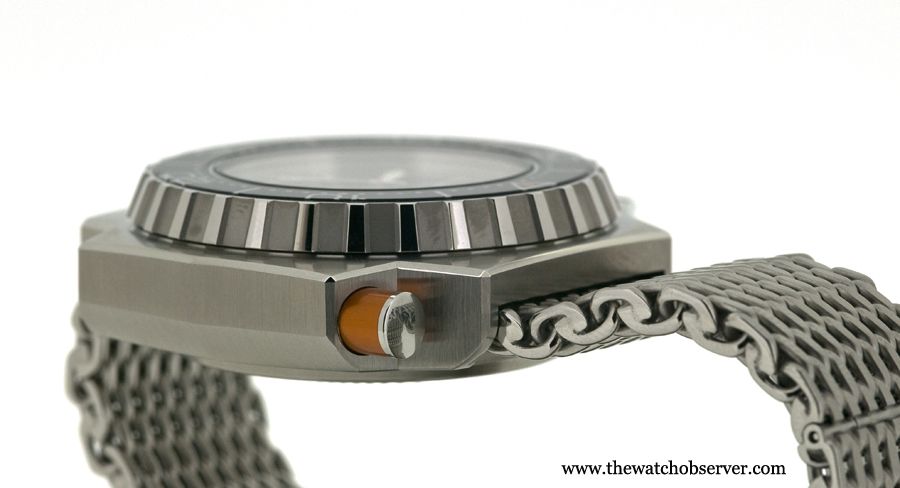 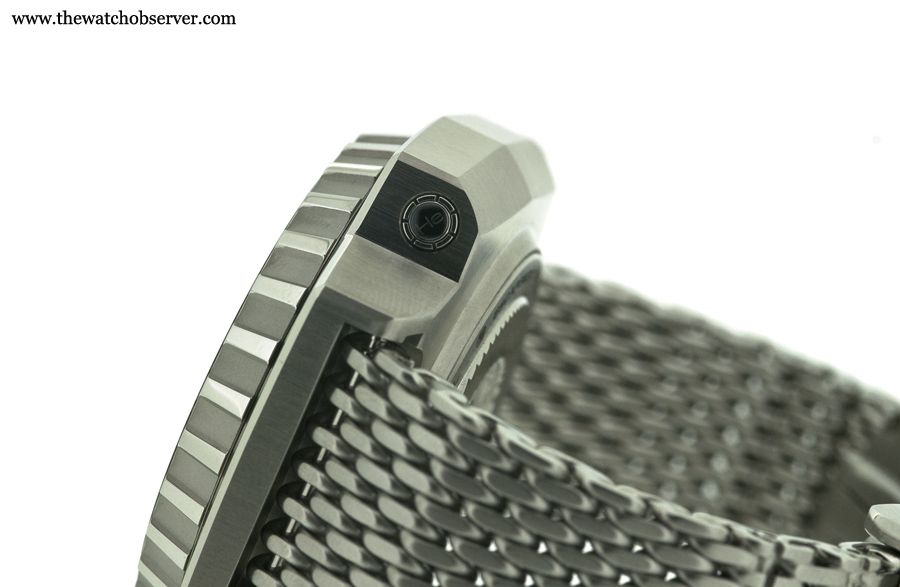 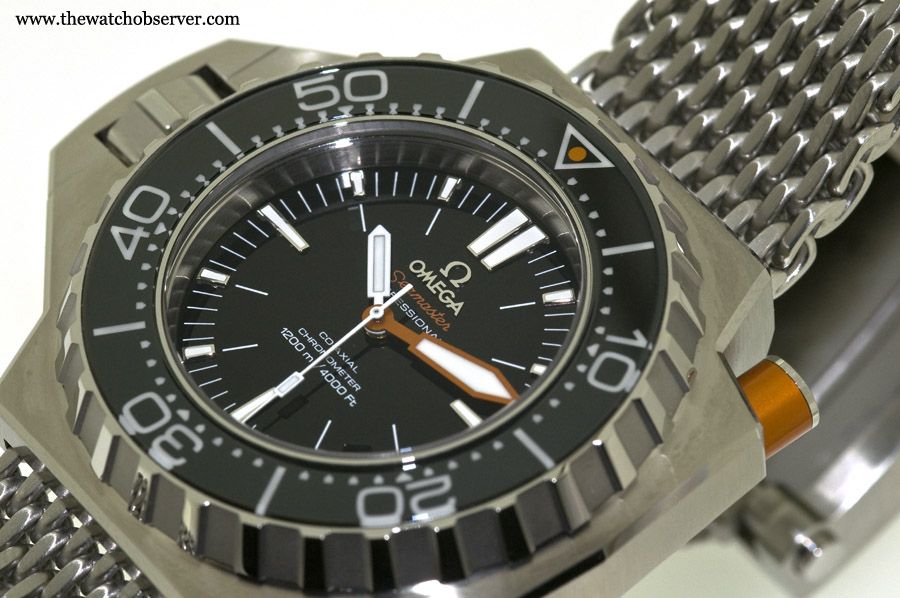 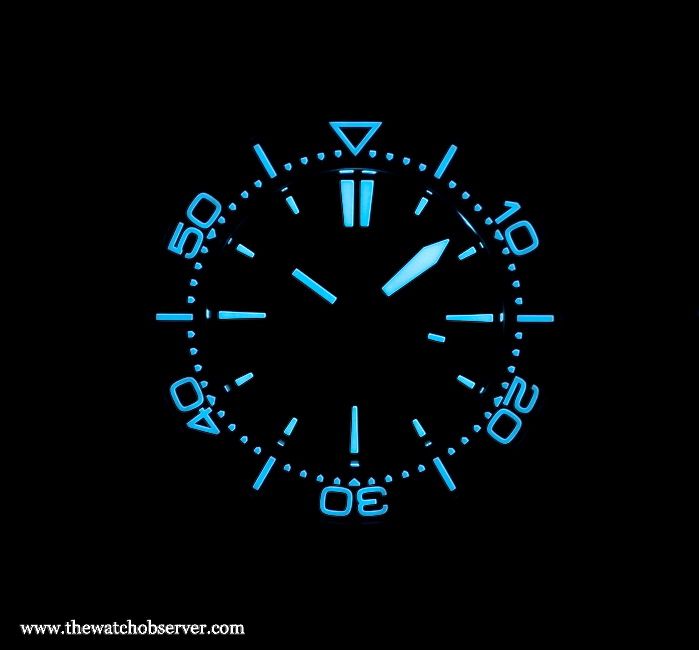 While lots of diver’s watches give priority to the look before the submarine functionality, Omega reissues its mythical model, the famous Ploprof (for PLOngeur PROFessionel).
A watch designed in its single detail for diving.
So, is it just a marketing strategy or the birth of a new icon ?

A conception without concession

The Ploprof does not look like to anything else but a Ploprof.
It is immediately recognizable for the enthusiasts but may arouse a certain surprise for the uninitiated with its case cut out with a billhook.
Sharp angles hardly soften by polished edges, weird orange push-button sidelong… the radical design of this tool-watch will not leave indifferent!

One of the main assets of this new edition is that it benefits a modern construction while remaining esthetically faithful to the original model of the 1970’s – to the exception however of the back that is now screwed and not anymore cast in one piece – unfortunate detail, although it does not penalize at all the functionality!

A watch that bears well its name

Does this Omega Proplof bear well its name?
Can it be considered as one of the most accomplished mechanic diver’s watch on the marketplace?

Everything is here thought for an intensive submarine use.

First, the legibility is perfect in every condition, for the time as well as for the time of diving, in particular thanks to the luminescent markers of the crown. 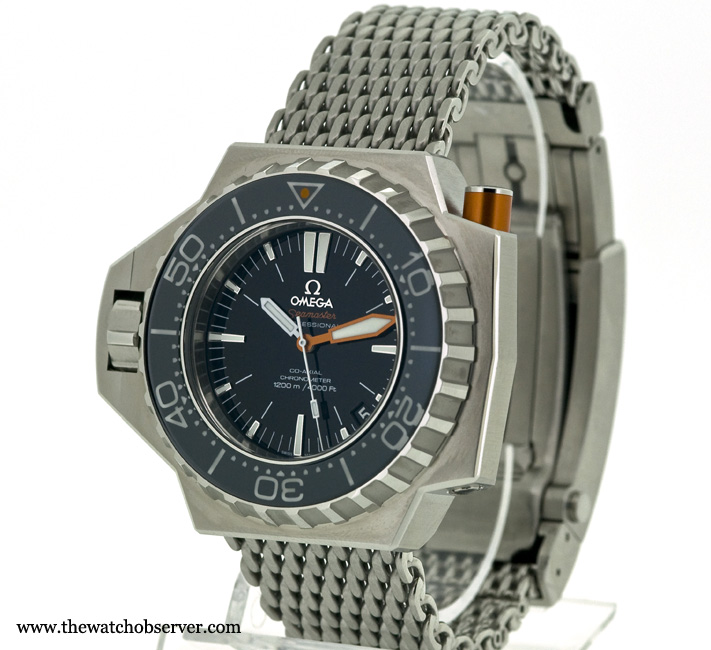 Then, the shape of the case gives the best possible protection to the crown: once screwed up, the crown is totally protected by a sliding metal “hat”.
Impossible to hook or to knock it.
And positioned at the left side, it does not disturb the movement of the wrist.

On the other hand, the bezel is perfectly secured by the orange blocking push button while its handling remains very easy, including with one hand.
It is covered with a scratchproof sapphire (substantial in case of “cuddling” a piece of coral or a rock).

Lastly, the strap could be single-handedly a reason to buy that Omega…
The massive folding clasp works like a handcuff: you only need to tighten the strap millimeter by millimeter to perfectly adjust it on your wetsuit.
A real pleasure!

Regarding the movement, the new co-axial 8500 caliber certified COSC is a more qualitative alternative than the eternal ETA 2892 and equivalent.

A watch that needs to be tried before buying it

If this watch is veritably perfect for a submarine use, it remains a watch that has to be imperatively tested and worn before purchasing it.
Its reasonable dial opening (30 mm) is pleasant.
But its impressive weight remains a problem: wearing 280 grams (more than 1/4 kilo !) around the wrist can quickly be annoying out of the water…

The limit of the exercise is reached here: a diver’s watch that is perfect in aquatic conditions is not necessarily an ideal watch on dry land…

If Omega released a titanium version (consequently lighter), the competitors would be in trouble!