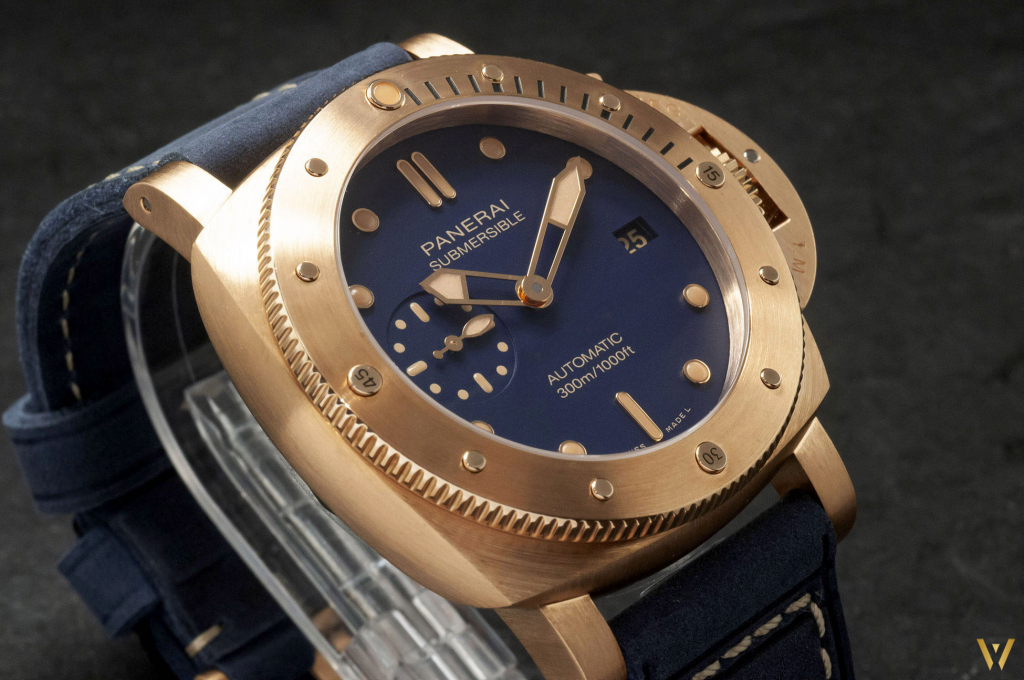 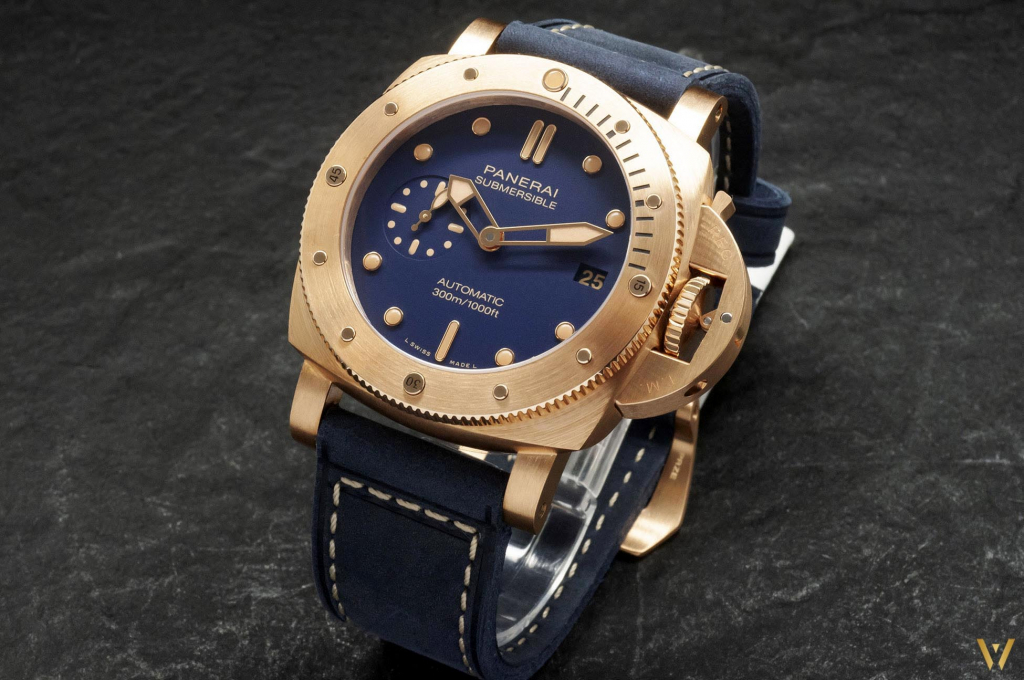 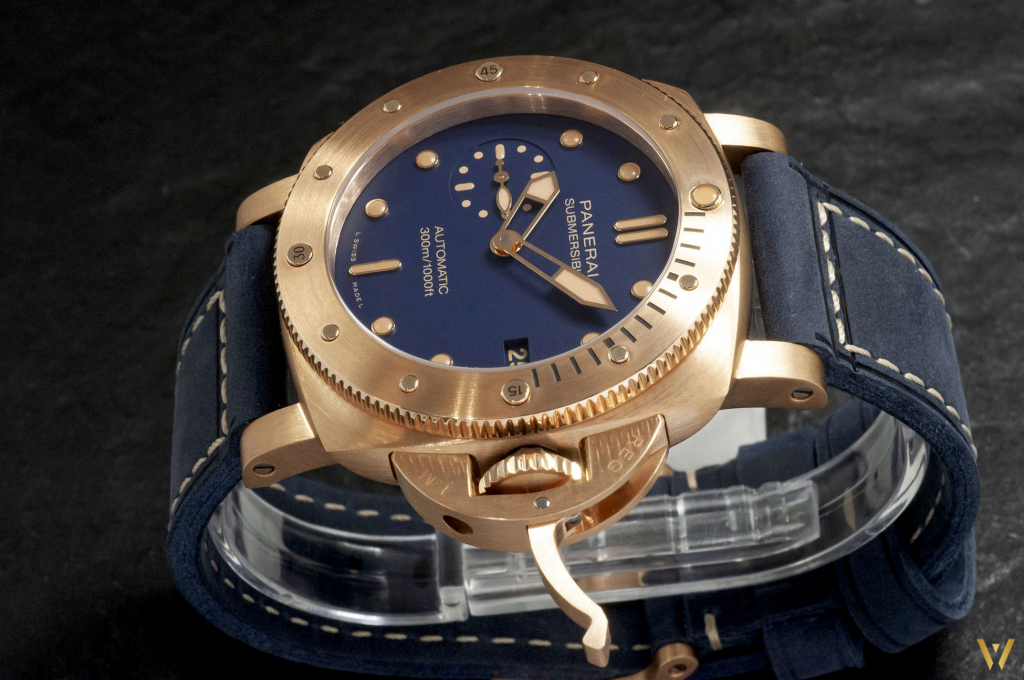 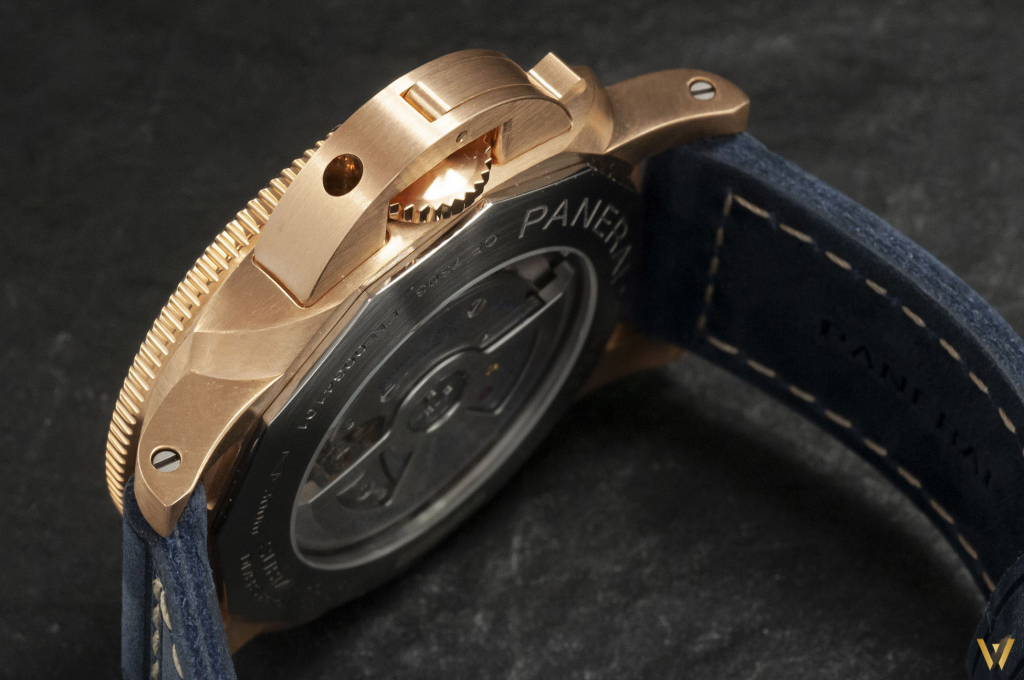 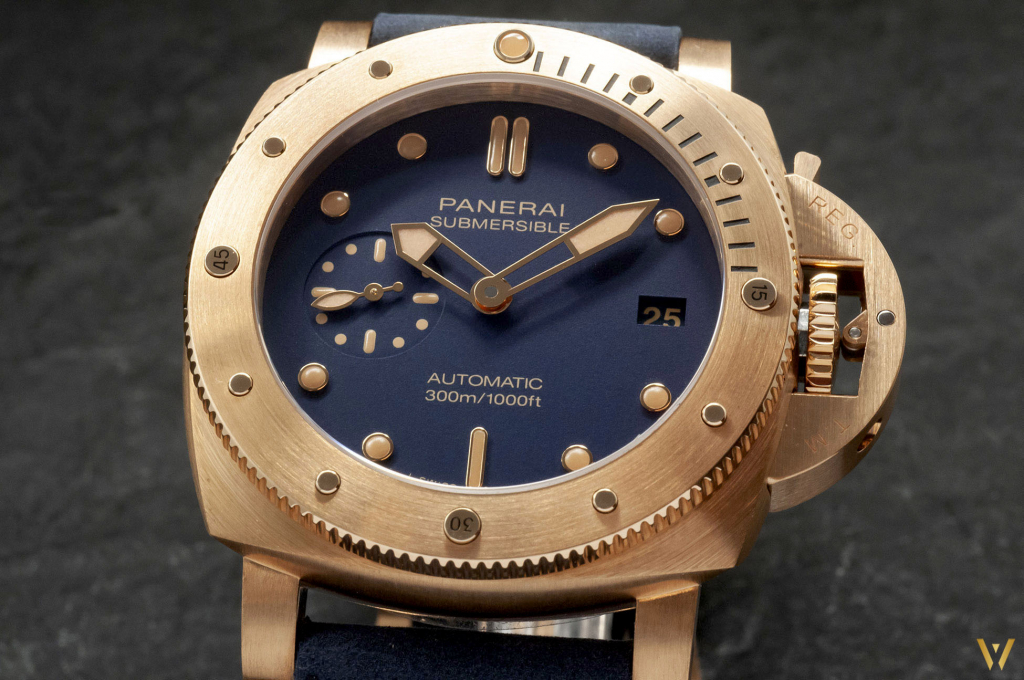 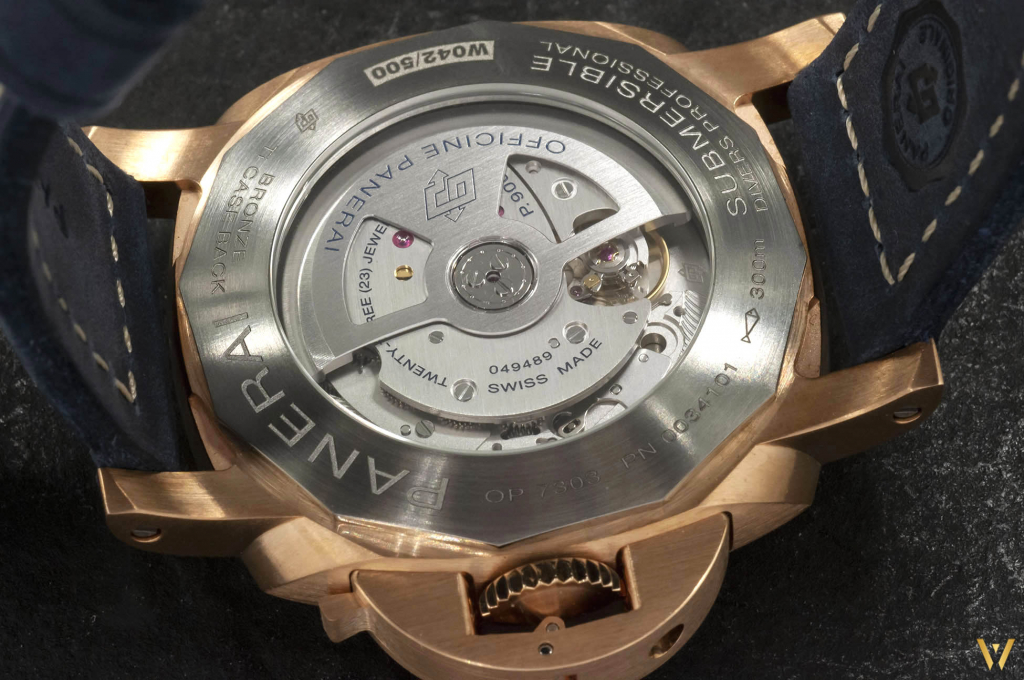 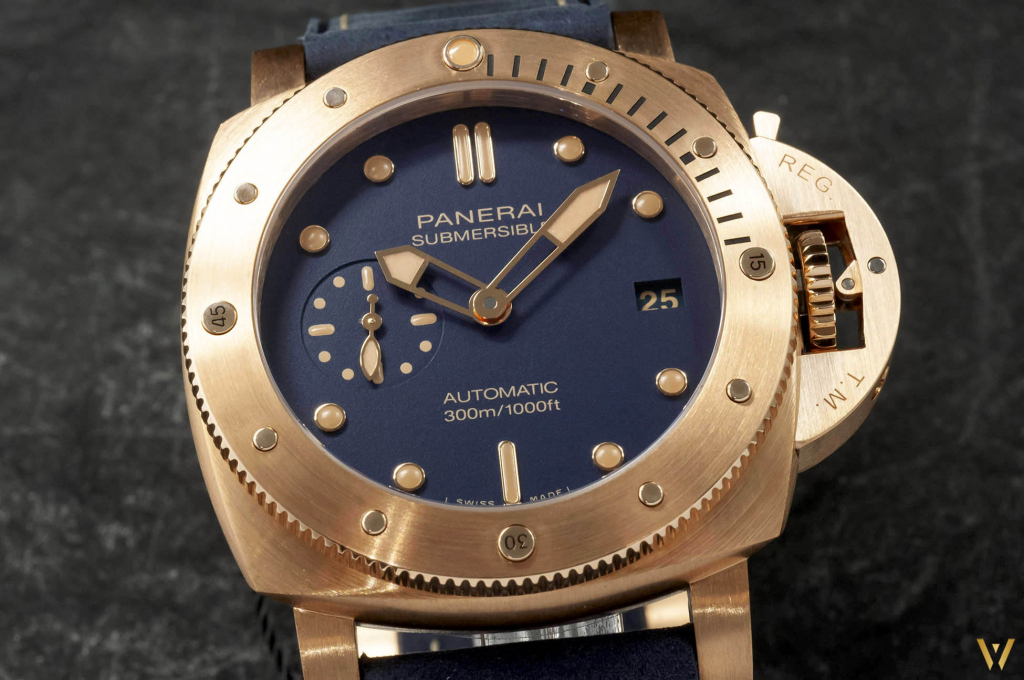 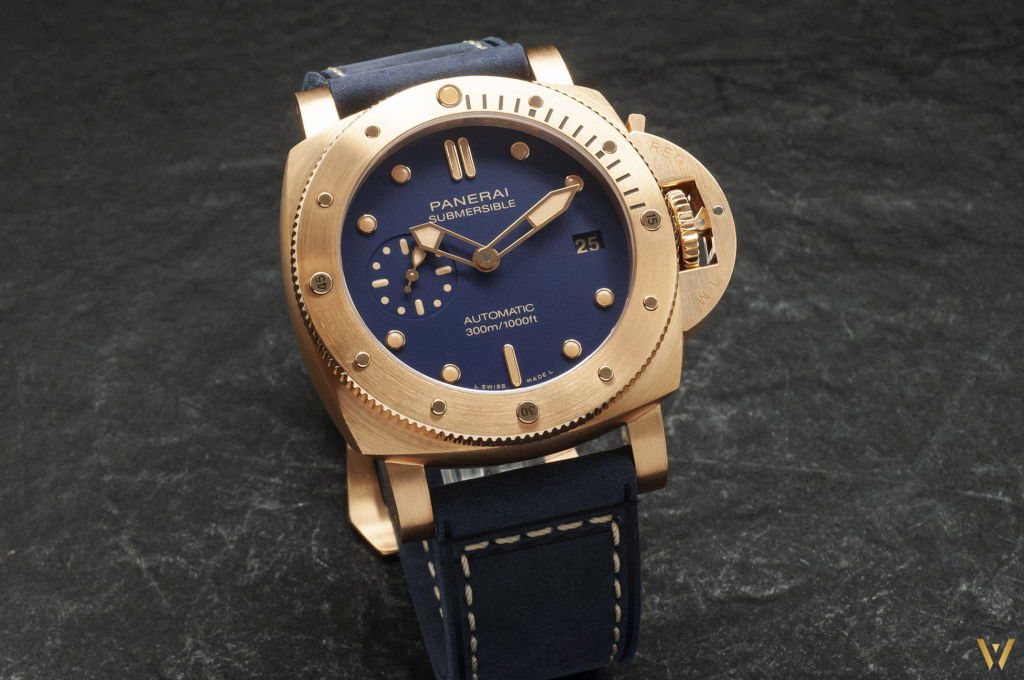 In 2010, Panerai would, without probably having anticipated or even imagined it, drag the entire watch industry (or almost) in its wake for many years.
The Florentine brand unveiled the Luminor Submersible Bronzo PAM 382 at the SIHH that same year.

While before it a few rare houses had offered bronze watches with very relative success, the Panerai Bronzo and its 1,000 pieces would sell out in just a few hours.

The story of the PAM 382 does not end there, however, as it is now impressively priced on the second-hand market, with the few examples on sale showing prices at least three times higher than its 2011 public retail price.

Since then, while some watchmakers have increased the number of references for bronze dive watches, the Richemont Group’s manufacture has been content to offer new versions in dribs and drabs.
This digital edition of Watches & Wonders Geneva 2021 (formerly SIHH), which opens its doors today, is an opportunity to discover the latest one: the Submersible Bronzo Blu Abisso, reference PAM01074.

Panerai PAM 1074: a new dimension for the Bronzo

Admittedly the pun is easy but I couldn’t avoid doing it…
Indeed, the new Bronzo of Panerai leaves in 2021 its classic 47 millimeters diameter to adopt, as its name indicates, a formidable diameter of 42 millimeters.

In fact, with measurements certainly masculine but nevertheless much more contained not to say more consensual, the Submersible Bronzo Blu Abisso PAM 1074 becomes wearable by all (or almost) the wrists.

This downward revision of the Bronzo’s diameter, as exciting as it is, is not surprising.
Panerai has indeed initiated for a few years a vast enterprise to seduce a public that goes far beyond its early fans, lovers of toolwatches and other imposing military watches.
This operation has resulted in the design of models with much more reasonable dimensions without denying its DNA, while Panerai continues to take care of its original aficionados.

In the latter register, we recently saw the launch of the Panerai Venti PAM 2020 celebrating the 20th anniversary of Paneristi.com.
In the first category, the Florentine manufacturer is offering more and more watches with a diameter of 42mm – I am thinking in particular of the beautiful PAM 977 Luminor Marina – when it is not less, Panerai unveiling this year new Luminor Due for women.

It is now the turn of the Bronzo.
The now 42mm of the PAM 1074 should indeed open new horizons. While it will not seduce the Paneristis who will probably find it too small, it will certainly win over the hearts of other watch lovers for whom the 47mm of the previous versions were perceived as being too imposing.

Rest assured, however, that the identity of this new Bronzo remains faithful to that of its predecessors.
Cushion-saphed case, robust 120-click unidirectional rotating bezel graduated from 0 to 15 and then punctuated every 5 minutes, Safety Lock crown protection bridge or short plunging lugs offering an impeccable wearing comfort.

The assets of this Panerai PAM 1074 Submersible Bronzo Blu Abisso do not stop there.
It is adorned with a magnificent blue dial with a matte finish on which the gold indexes and hands stand out beautifully.

Panerai even goes so far as to use a beige Super-LumiNova (with green emission), the color of which matches perfectly with the case and the dial elements.

The result is a beautiful harmony served by warm tones that give this Panerai Bronzo 2021 edition a great elegance despite its appearance of a dive watch. And in fact a greater versatility.
The brushed treatment of its case also allows it to remain (relatively) discreet on the wrist, this matte finish sparing it a shiny and ostentatious side that would not suit it.

Panerai naturally powers its new automatic watch with one of its manufacture calibers.
It is the brand new P.900 caliber, which delivers a 72-hour power reserve – a Panerai classic.

Finally, to complete the harmony and elegance of its Submersible Bronzo Blu Abisso, Panerai has given it a blue vintage-effect suede leather strap with ecru stitching, the color and texture of which perfectly echo those of the dial – this strap being closed with a bronze trapezoid buckle.

As a dive watch, the company delivers the Bronzo with an additional blue rubber strap that comes with a screwdriver for removing and changing the buckle.

The last point that is at the center of Panerai’s new strategy: the Panerai Submersible Bronzo Blu Abisso PAM 1074 is delivered in a box made from recycled plastic.

I am one of those who like bronze watches in general, Panerai being without doubt a trend setter in this field.
However, one detail made me hesitate until now: the 47 millimeters diameter of the previous Bronzo editions.

The arrival at Watches & Wonders Geneva 2021 of this Submersible Bronzo Blu Abisso PAM 1074 changes radically the deal, this new Panerai displaying from now on a contained diameter of 42mm which, on a 17,5cm circumference wrist (mine!), does not denote in any way.
On the contrary.
It has a sublime matte blue dial with golden hues and a blue strap in total harmony with the watch head. To the point of being for me the most beautiful Bronzo ever produced by Panerai – but that’s just my opinion!

The result is so irresistible that the 1’000 pieces of this new Bronzo should once again be sold out before they even arrive in stores.
So, a piece of advice, if you have a crush on this PAM 1074 like I do, and if you have the budget (USD 15’900), call your favorite Panerai dealer without delay to reserve one!

Technical specifications and Retail price below… 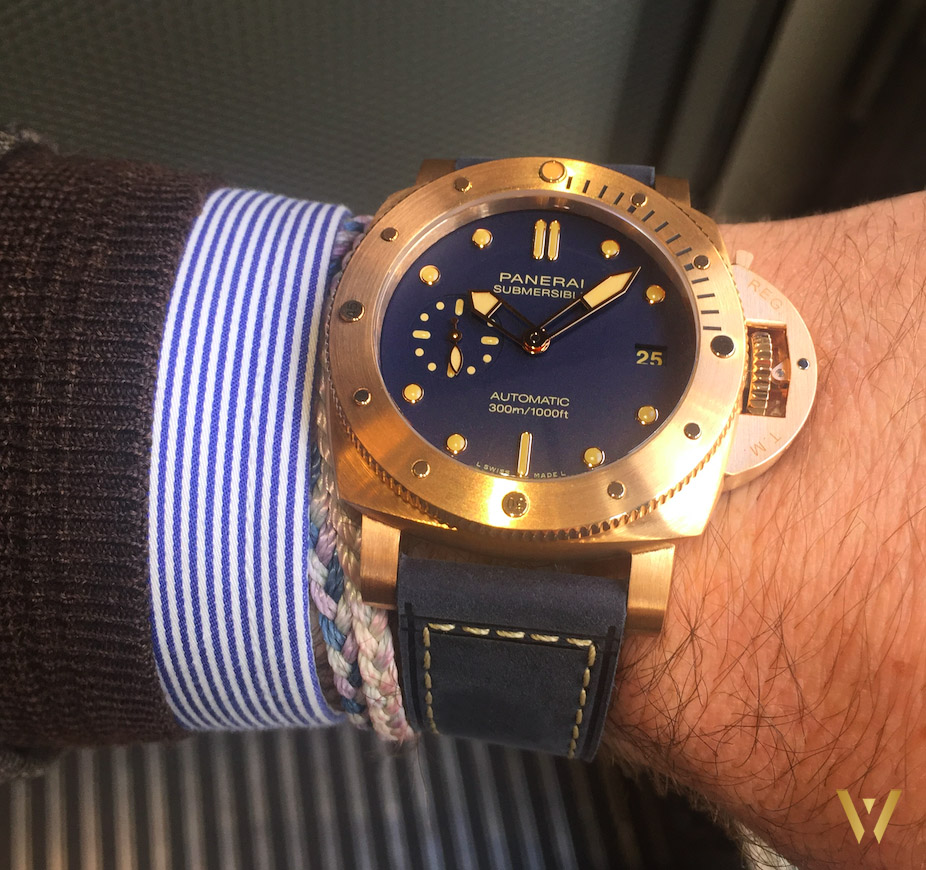