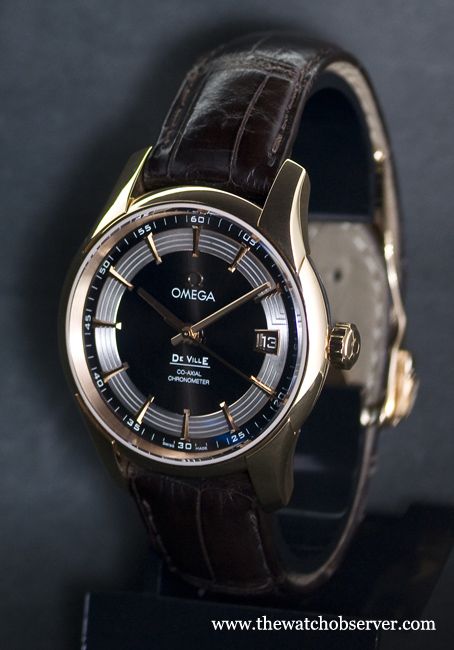 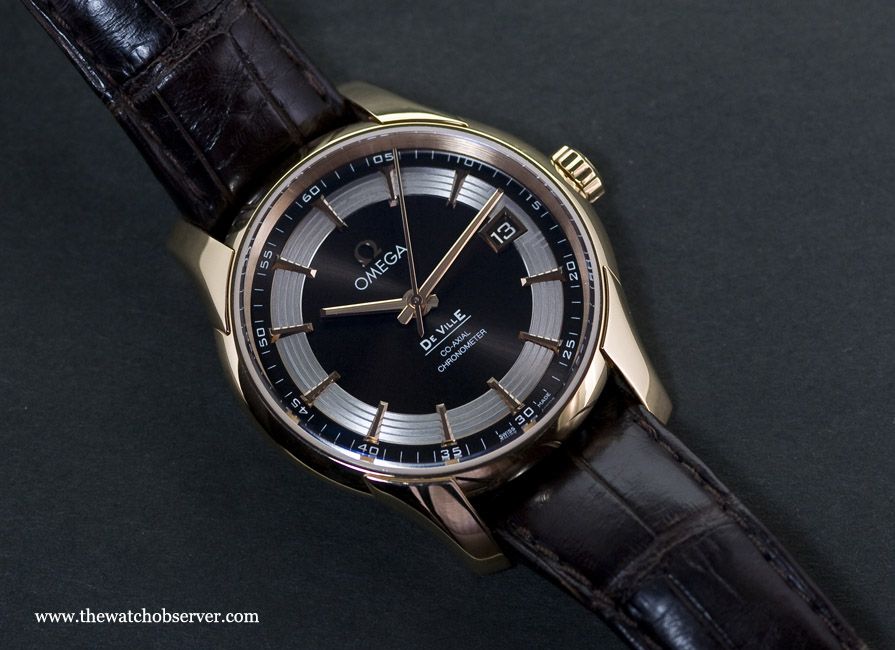 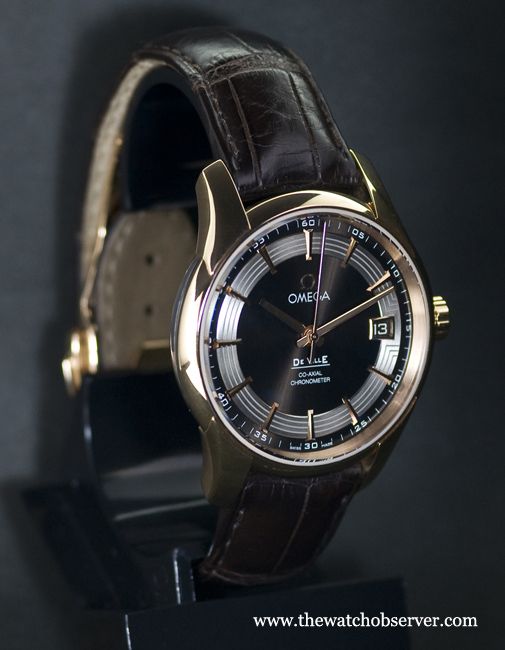 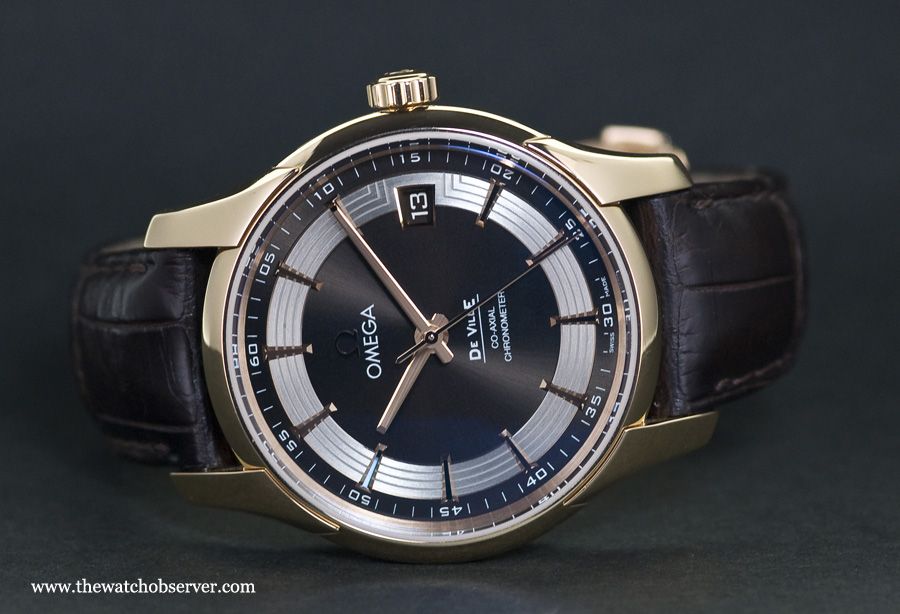 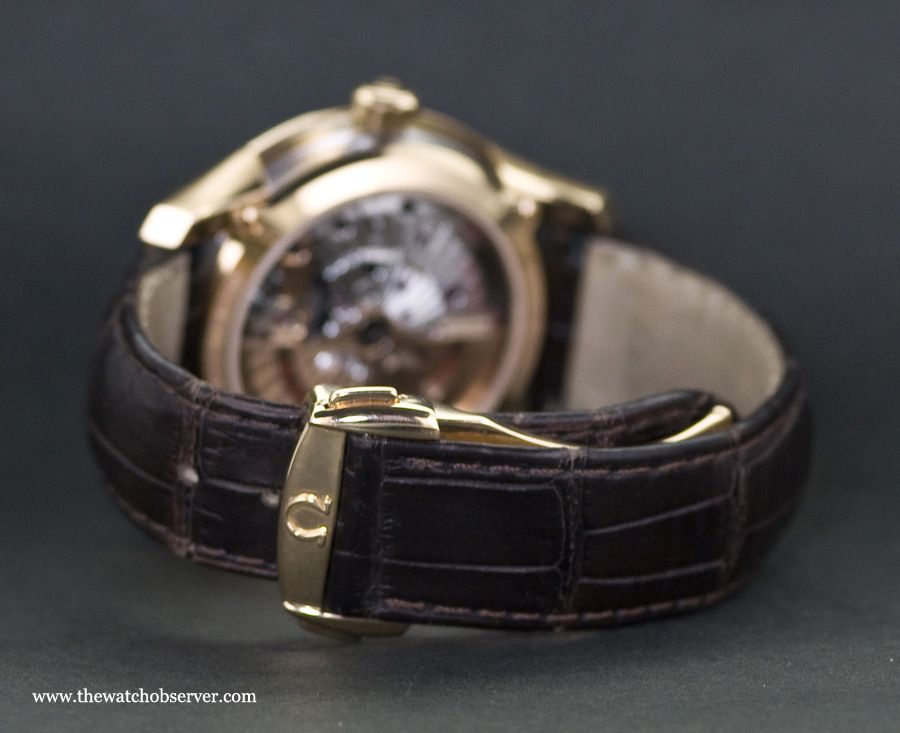 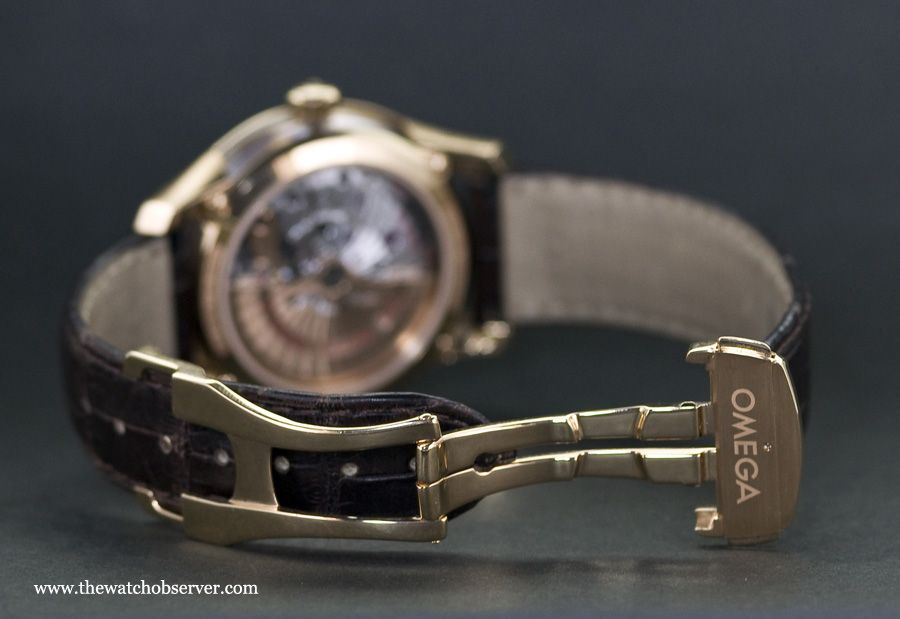 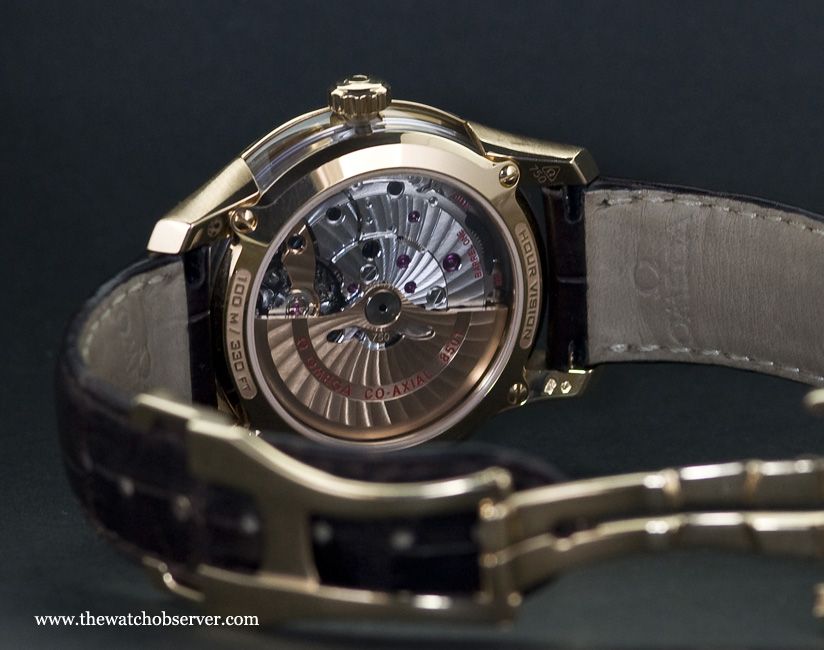 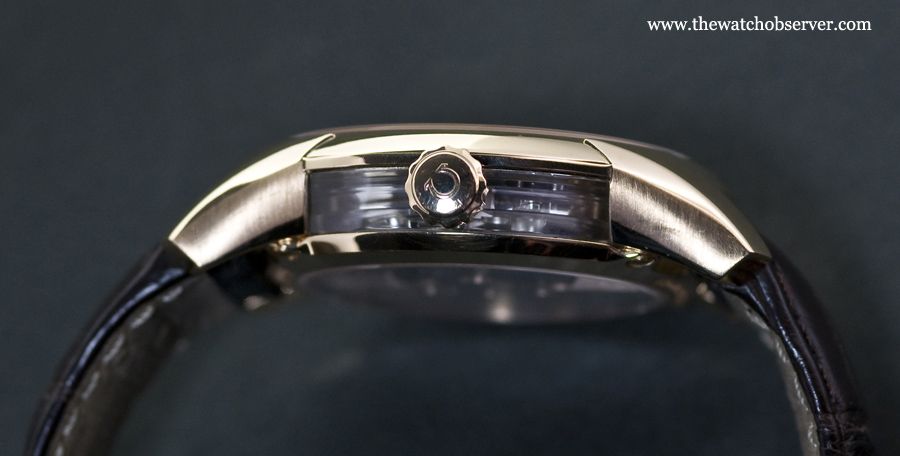 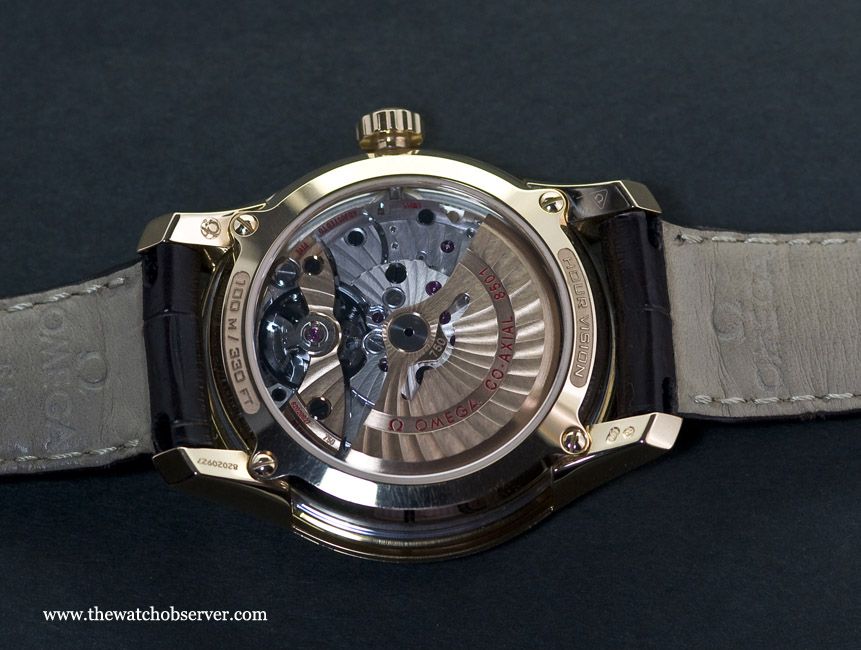 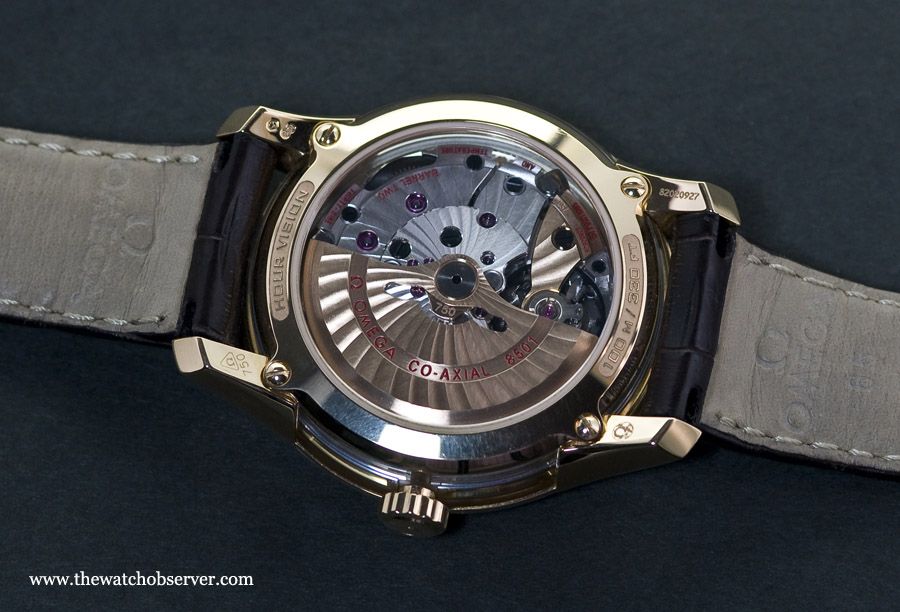 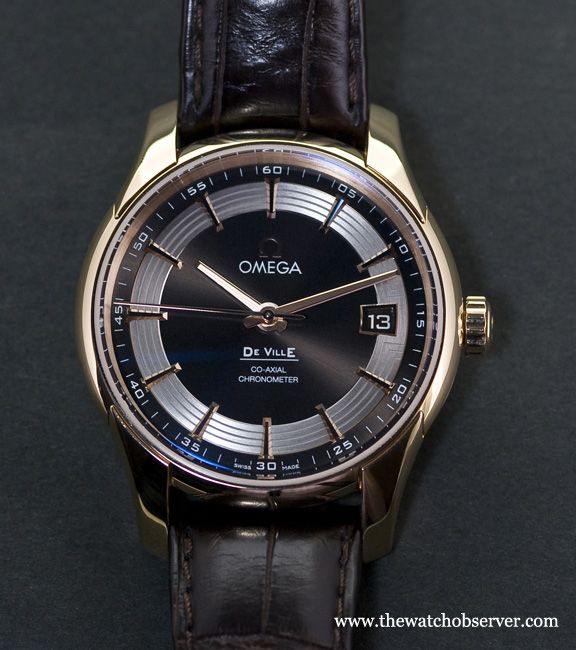 A comfortable automatic watch to wear

The case’s figure of this Omega is thick, almost stocky.
The De Ville Hour Vision case back’s diameter being smaller than the diameter of the bezel, the case increases in size and opens up towards the top.

As a result – with its short, curved lugs – the positioning on the wrist is excellent, and the overall comfort optimal.

The brown crocodile strap is fitted with a folding clasp made of red gold, comfortable and easy to use.

The feeling of power visually conveyed by the case is reinforced by the real-life weight of the red gold, along with that of the sapphire crystal: part of the case middle is made of this see-through material, revealing the 8501 Omega Caliber profile on the flanks and between the lugs.

We’ll get back to that.

Let’s take a look at the dial from the outskirts moving inward.

First off, we have the internal brushed bezel made of red gold, inclined all the way to the dial with its color fluctuating between black and dark brown.

Furthermore, we find a very discreet white railway track graduated from 0 to 60, used as a marker for the minutes and seconds.

Then, we have the time display located on a rhodium surface with its grooves spread to make room for the date.

The look of the surface is reminiscent of a printed circuit on an electronic board, adding a certain technological touch to the overall look of this otherwise dressy watch.

Then come the red gold faceted hourmarkers.
The different types of finish on these markers give them the ability to capture light with a variety of different angles.
The hands and the date window also benefit from the same design.
The overall result gives this Omega an excellent display readability.

The writing on the dial is reduced to a miminum, to the great joy of austerity fans. Also visible, other than the brand and model name, are the inscriptions “CO-AXIAL” and “CHRONOMETER”.

All this information leads us to the in-house automatic movement, the 8501 Omega Caliber, which is visible under all of its different facets on the side of the watch’s case middle, and also behind the sapphire crystal back.

Let’s first take a look at its design: the rotor is made out of red gold, like the balance bridge.

The screws and the balance are blackened (using rhodium plating) as well as the barrels which are coated with DLC – or Diamond-Like Carbon.

These coatings provide a delicate contrast with the decorated surfaces of the Côtes de Genèves and their arabesque design.
The overall look gives the whole piece a strong and beautiful visual identity.

On the technical side of things, the 8500 Caliber, which was the basis for the concept behind 8501, is the first of Omega’s newest generation of calibers (launched in 2007), improved with its increased reliability and regularity, and simplified maintenance.

We first notice the co-axial escapement developed by the great watchmaker Georges Daniels, initially introduced by Omega in 1999 – evidently the only brand to use it for mass production.
This escapement improves the regularity of the movement’s functioning. 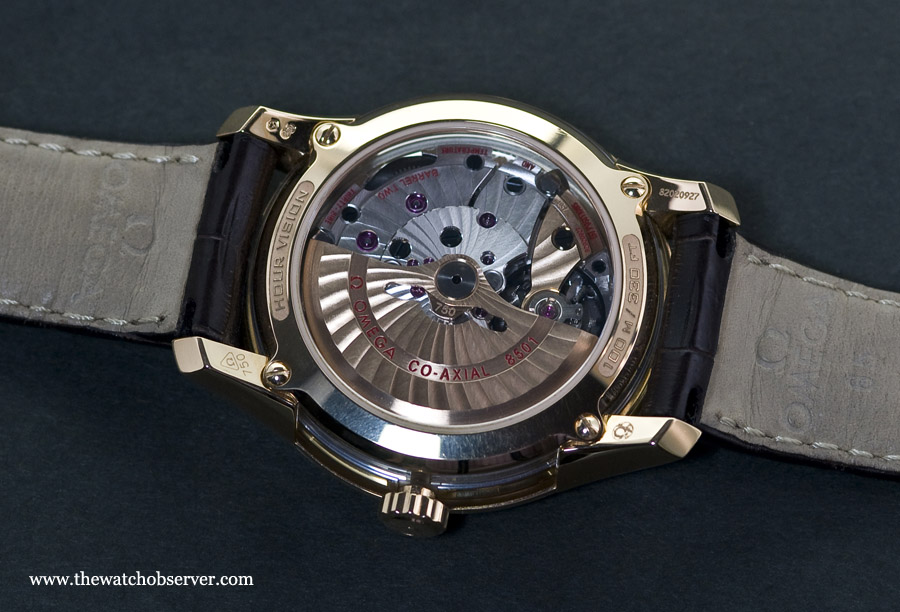 The bi-directional rotor of this automatic watch, without the bearings and equipped instead with a new pinion, has improved in efficiency and reliability and requires less lubrication.

It provides energy that simultaneously winds the two barrels, which now have minimal friction thanks to their internal and external DLC coating, and no longer require any lubrication.

These two barrels are mounted side-by-side to allow for optimal usage, and again improve the watch’s regularity by reducing the tension of its springs – as opposed to having a system with a single, longer spring in one barrel (with an equivalent power reserve).

The substantial improvements provided by Omega in this 8501 caliber contribute greatly to the overall maximized reliability of this De Ville Hour Vision.

The De Ville Hour Vision could almost be considered the display model for Omega’s R&D department. Its caliber is indeed clear evidence of real technological progress in the watchmaking world that can also be applied to a mass production scenario.

Setting the technical considerations aside, the design of this timekeeper’s case is a real visual triumph, and wearing it is nothing short of a daily pleasure.