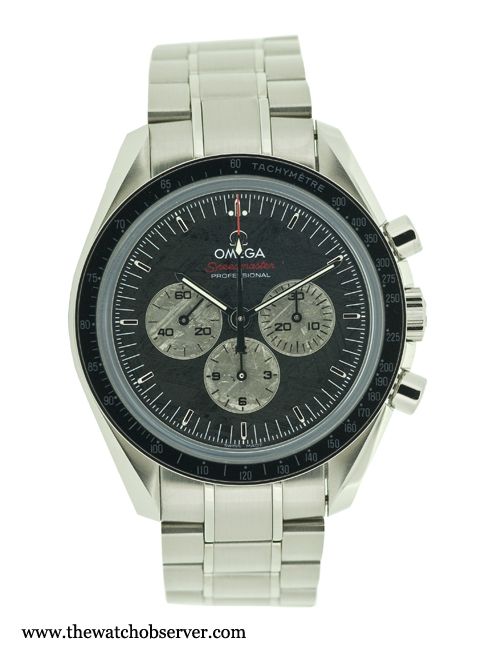 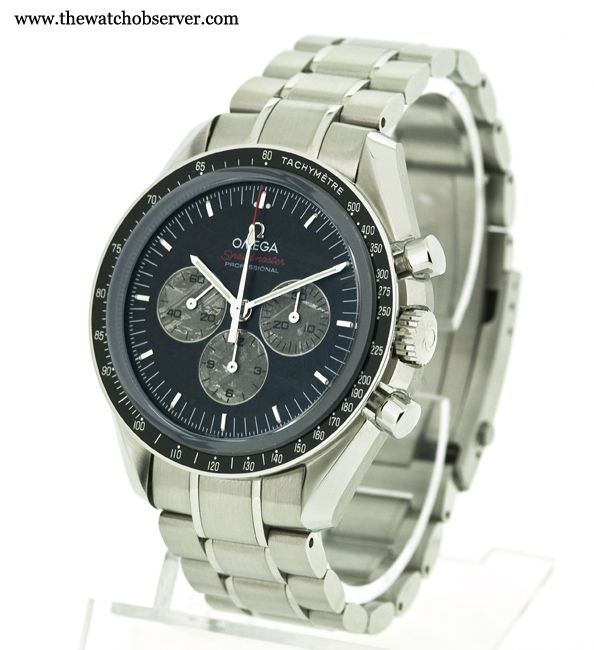 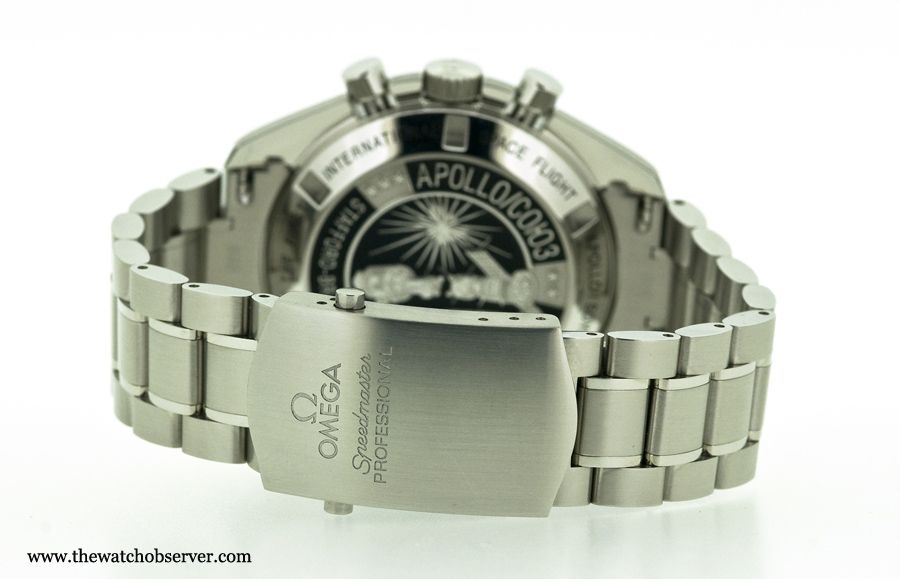 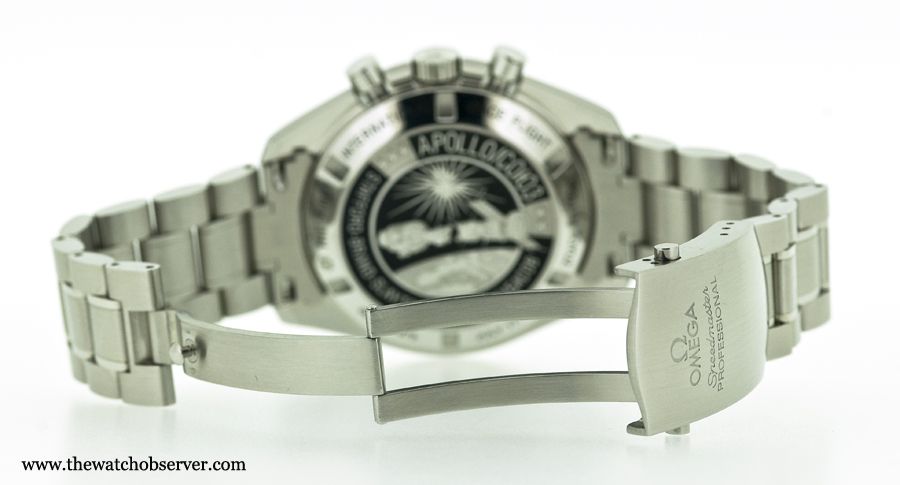 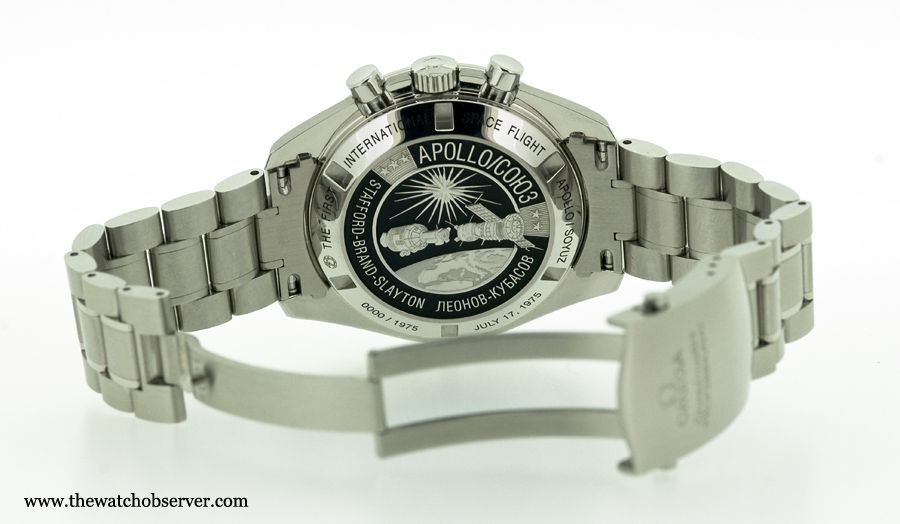 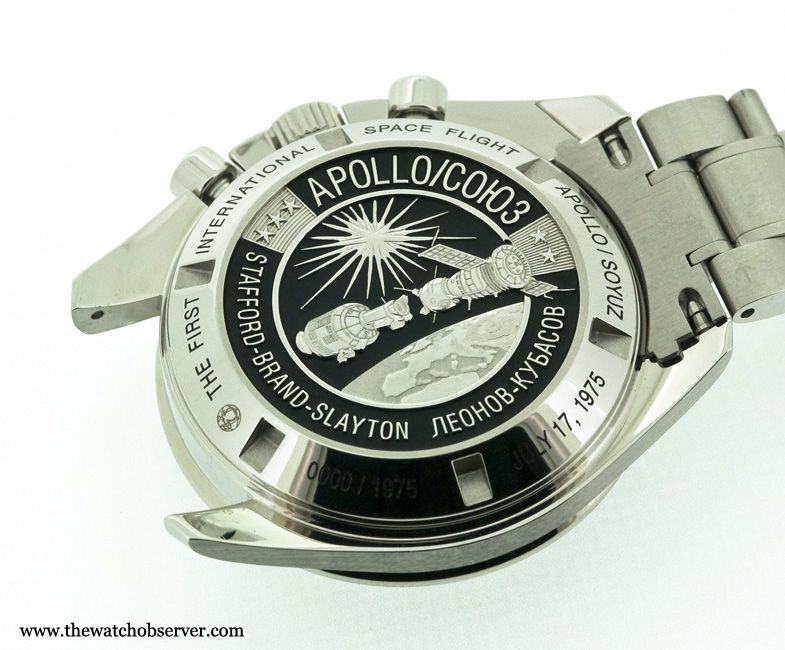 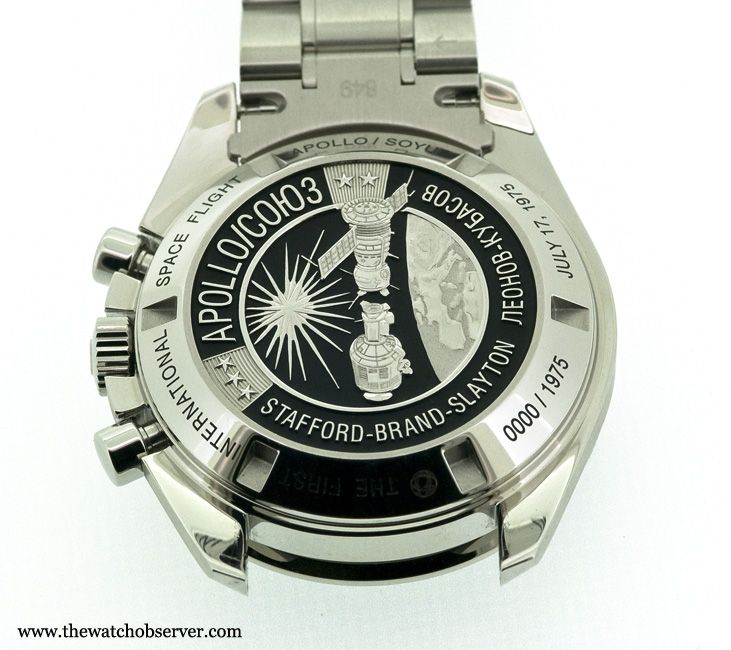 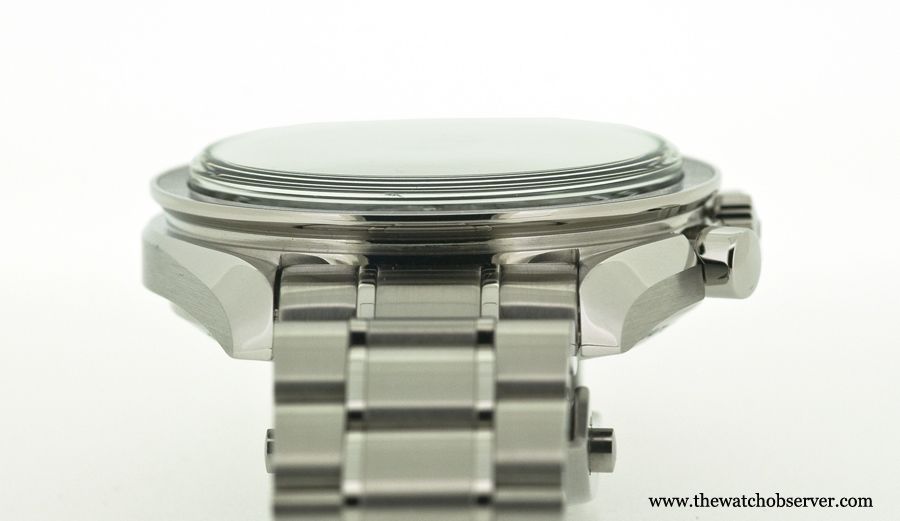 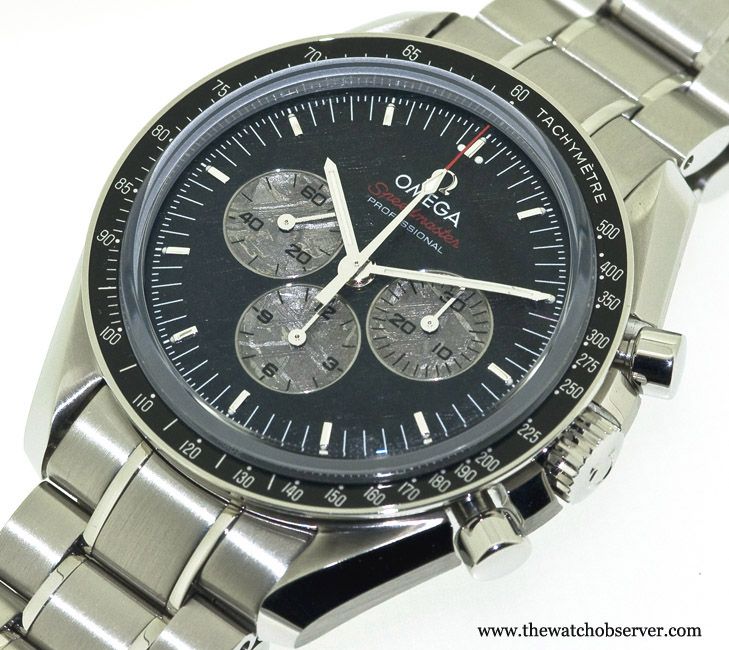 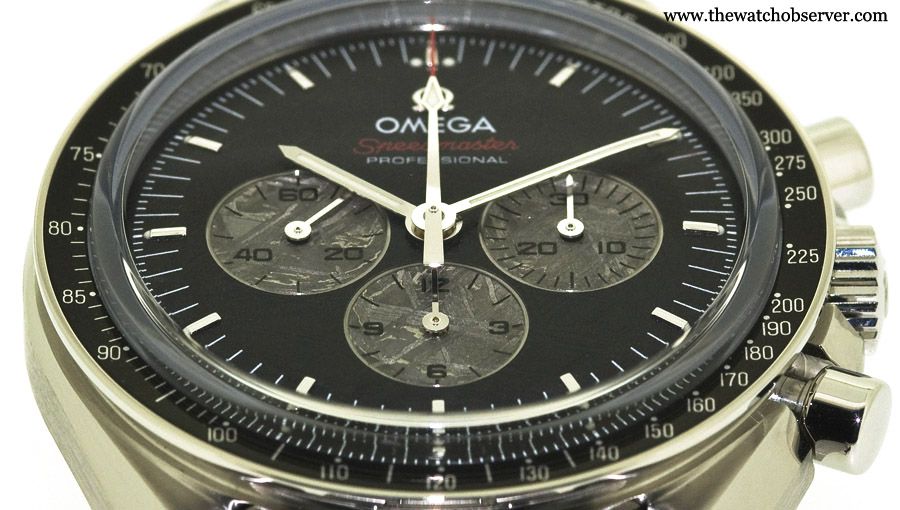 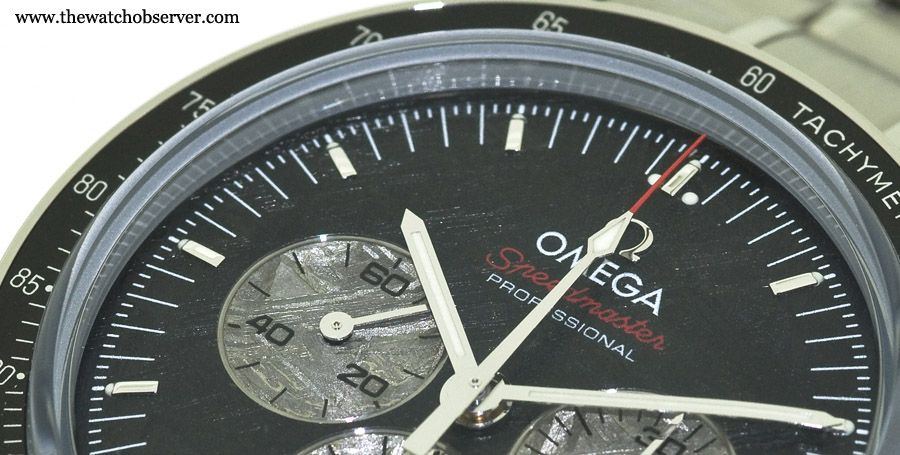 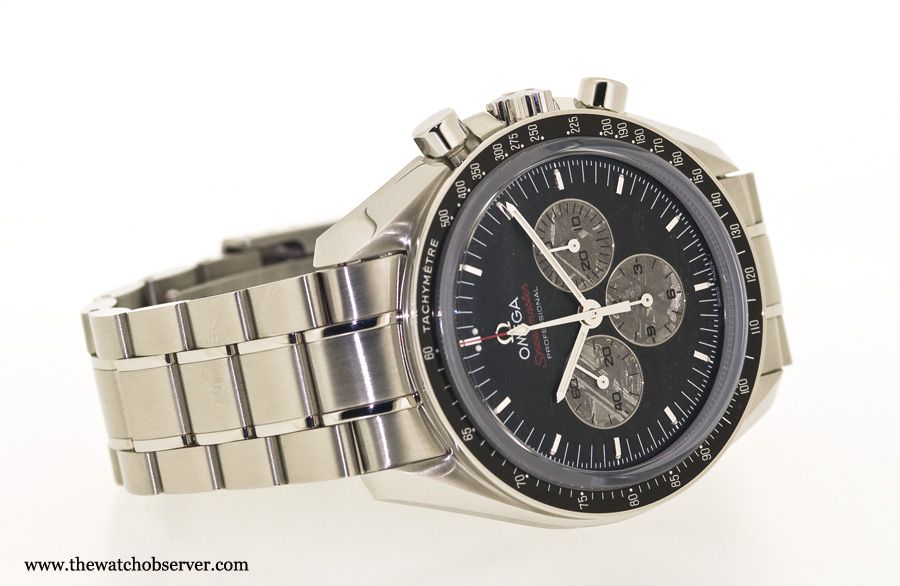 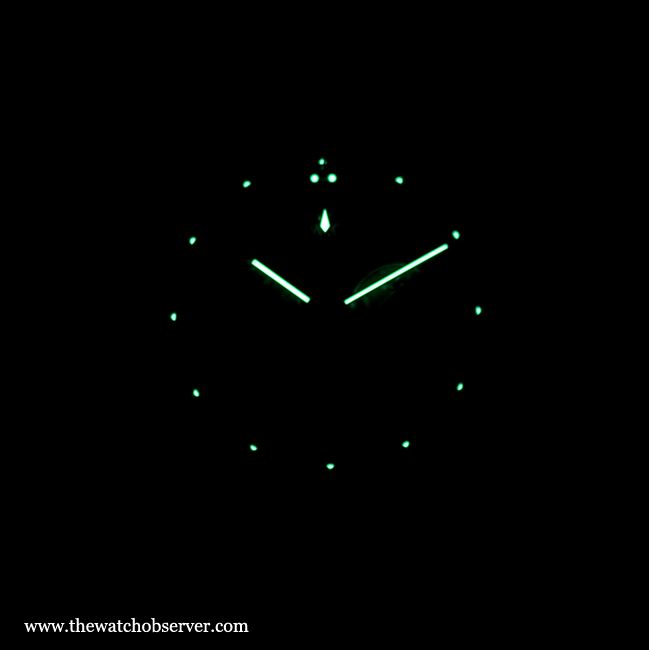 2010 new release, the Speedmaster Professional Apollo-Soyuz 35th Anniversary is endowed with a dial made of meteorite, a must-have for the first watch that has travelled to the moon! We have tested it for you.

An exclusive declination of the classic Speedmaster

No need to present it anymore, the Omega Speedmaster Moonwatch is totally backed and has become an icon.

Comfortable, readable, reliable…
It has not been officially approved by the NASA without any reason.

Moreover, offering an unbeatable quality/price ratio, it is the watch that almost every single amateur has owned, owns, or plans to own someday…

So the “Speed” has only one default: its “omnipresence” that can repel those who want to be original….

To which Omega, that has well understood the problem, answers by multiplying the limited serial commemorating the huge moments of the space conquest.

Just to give back a little exclusivity to its flagship model.

A dial that makes every piece unique

Let’s be straight: the sole historical interest of the commemorated mission here (the first “spatial” handshake between an American and a Russian crew) will be a difficult argument to justify the purchase…

The engraved back has been realized with a lot of care.
But it still keeps a kitsch side inherent to all the “memories medals”.

No, the principal interest of this Apollo-Soyuz 35th Anniversary really lies in its meteorite dial.

Although bicolor, it is made of one sole block: the chronograph counters are kept in their natural silvery color, while the remains of the dial has undergone a black galvanic treatment for a better readability.

Knowing that the meteorites are undergoing extreme temperatures while entering the atmosphere, the rock has a particular texture, as of crystallized, which makes every dial really unique.

The result is really aesthetically pleasant, with metallic and colorful reflects (from night blue to silver), which has not yet been observed with other materials.

It gives this “Apollo-Soyuz” a true personality.
It is a far cry from the simple declination that contents itself with offering new shadows on the dial! 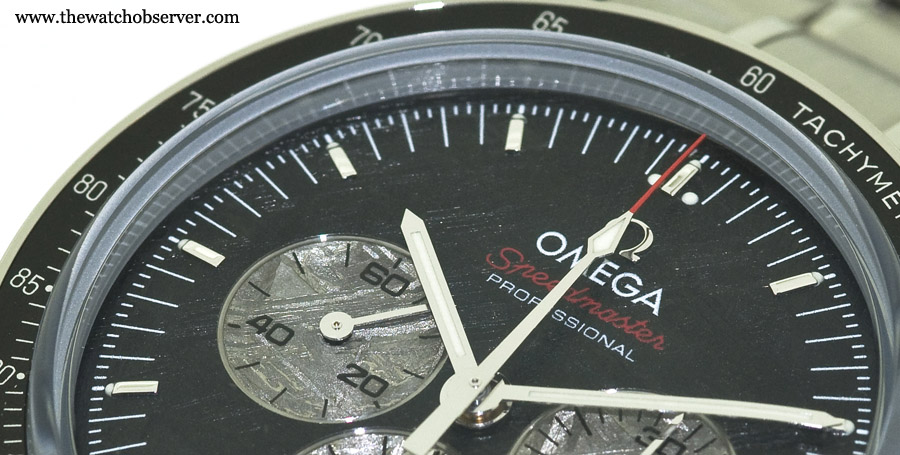 The price of the exclusivity

Nevertheless, negative point of this version, the rhodium-plated hands sometimes mix up with the reflections of the dial.

The readability (in particular, the chronograph) is not as good as on the classical Speedmaster.

With a 6,200-Euro price, it is the cheapest “meteorite” watch on the market.

This type of dial is usually indeed offered on much more exclusive models and with incomparably higher prices (around €15,000 and more…)

Nonetheless, it costs almost the double price of the standard Speedmaster…

This Speedmaster Professional Apollo-Soyuz 35th Anniversary is hence a really atypical declination of the flagship model of Omega, to be advised above all to the enthusiasts of the space conquest and to the Speedmaster’s collectors.
But the charm is undeniable and the exclusivity of its dial will not keep anybody safe from a love at first sight…
A watch that has to be tested to get an opinion!