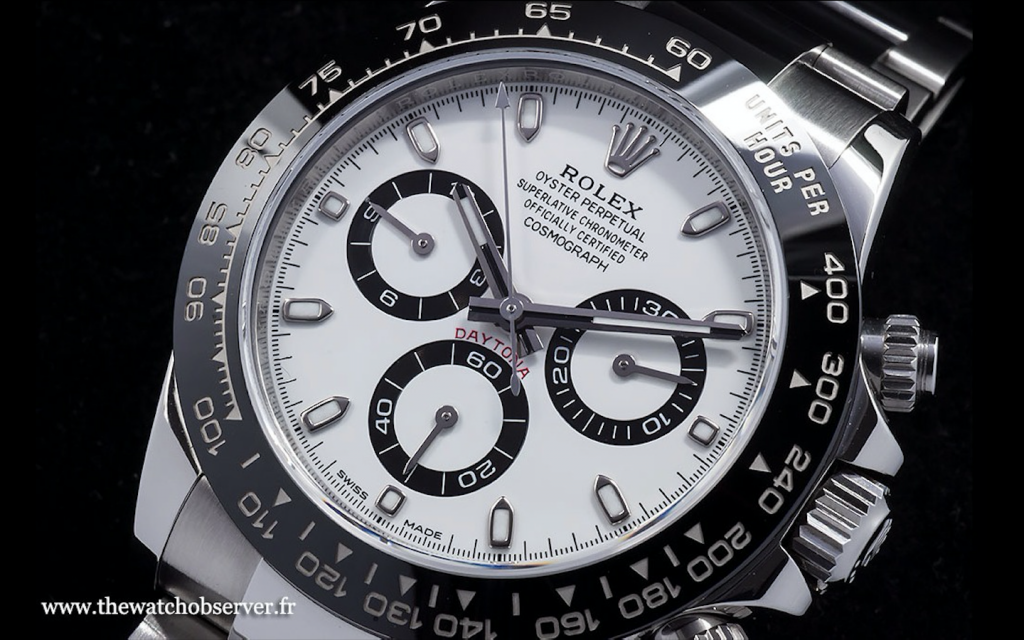 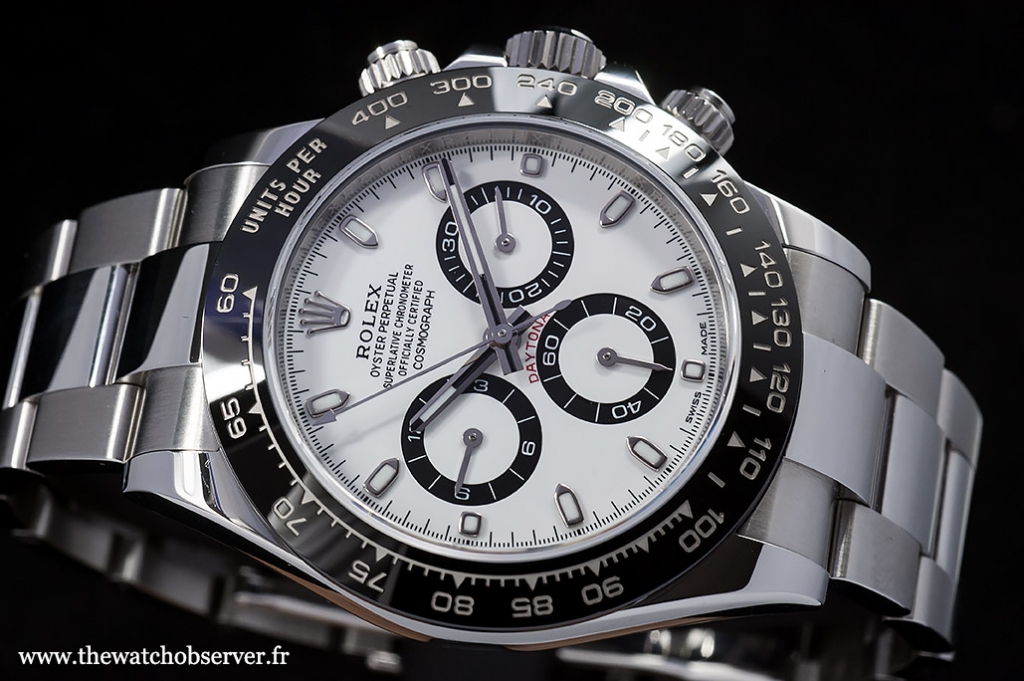 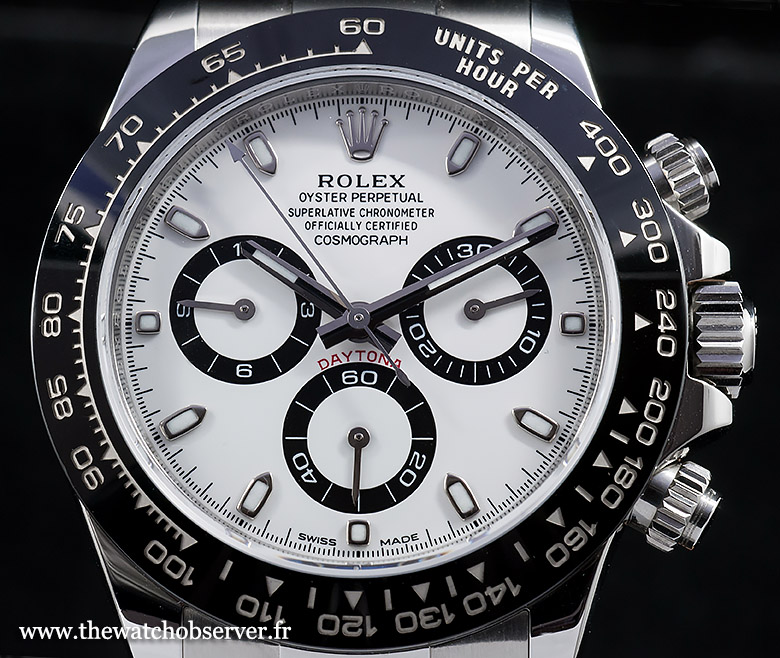 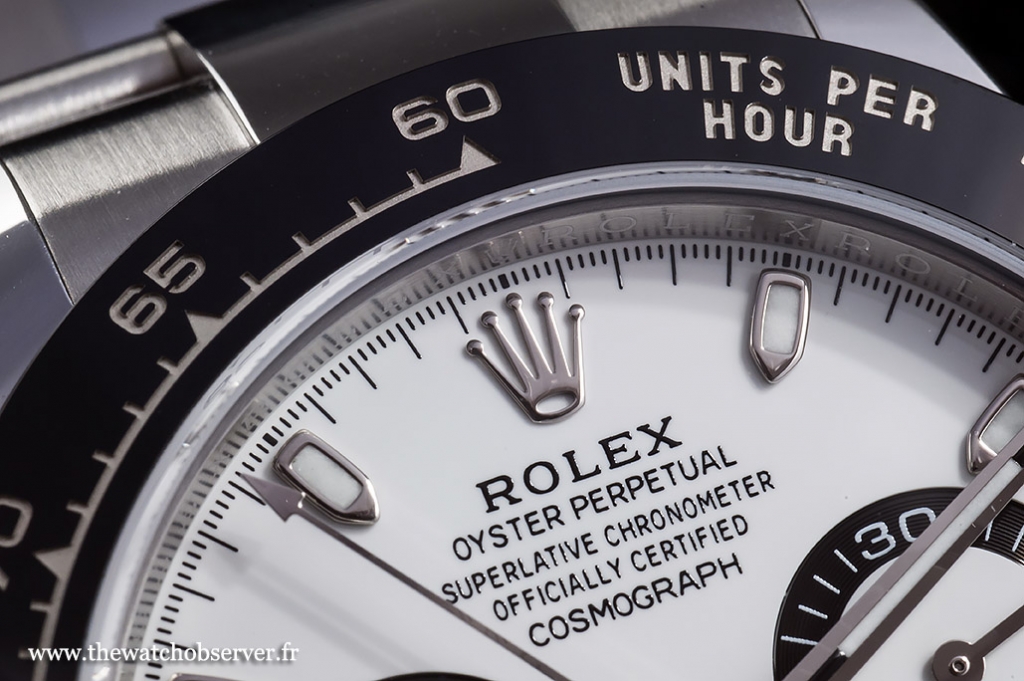 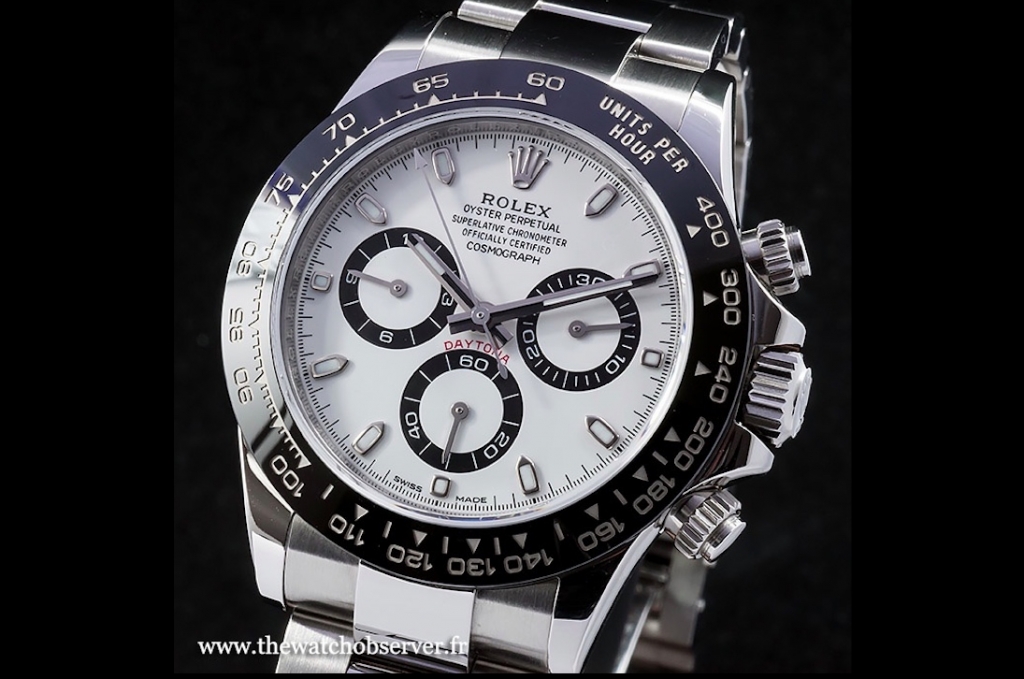 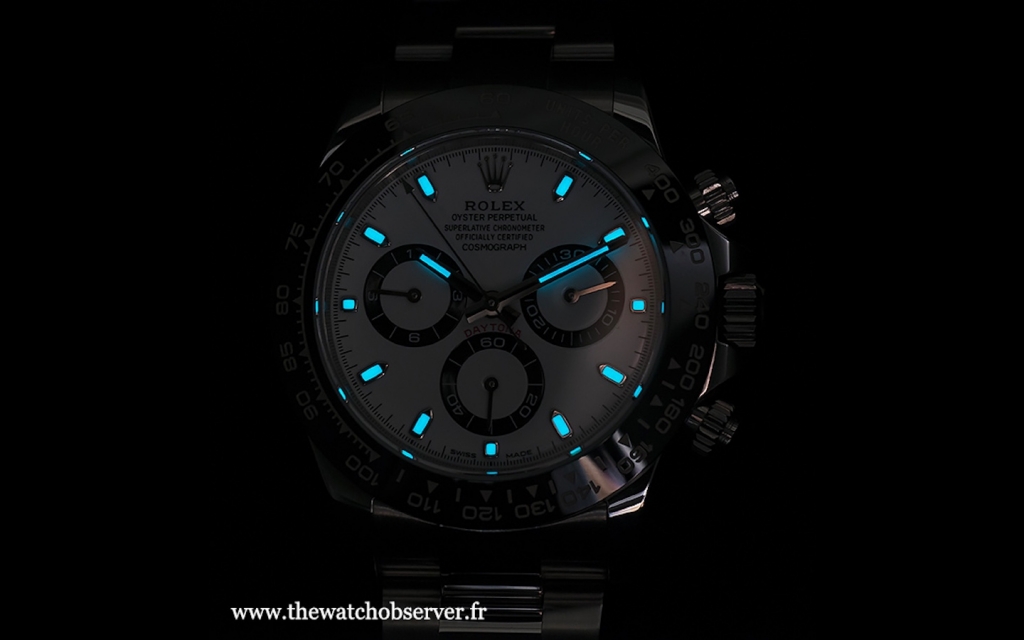 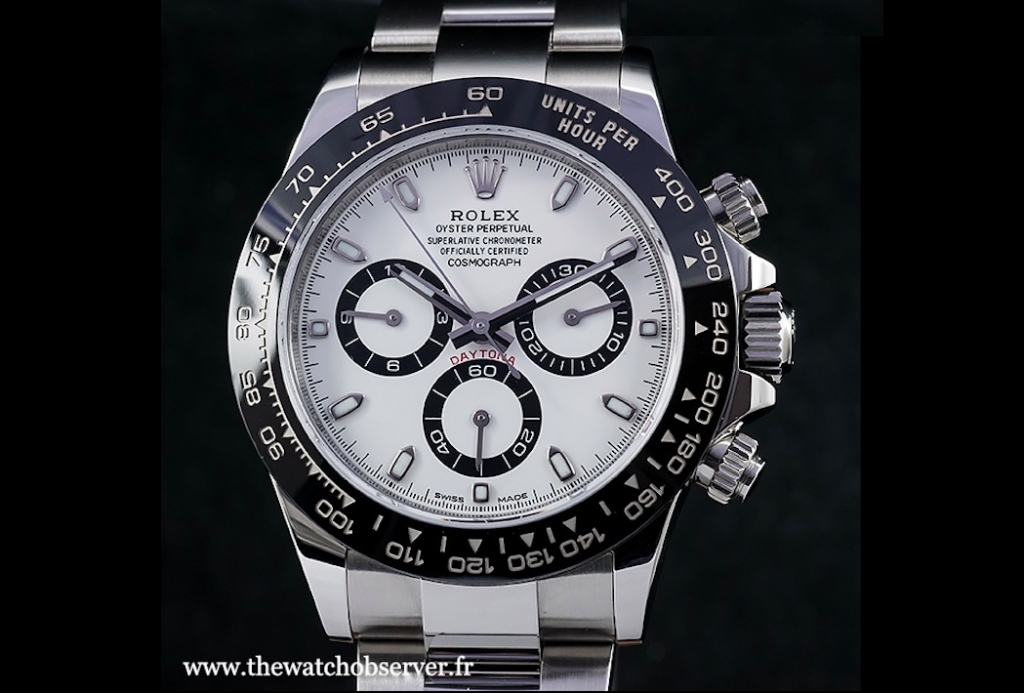 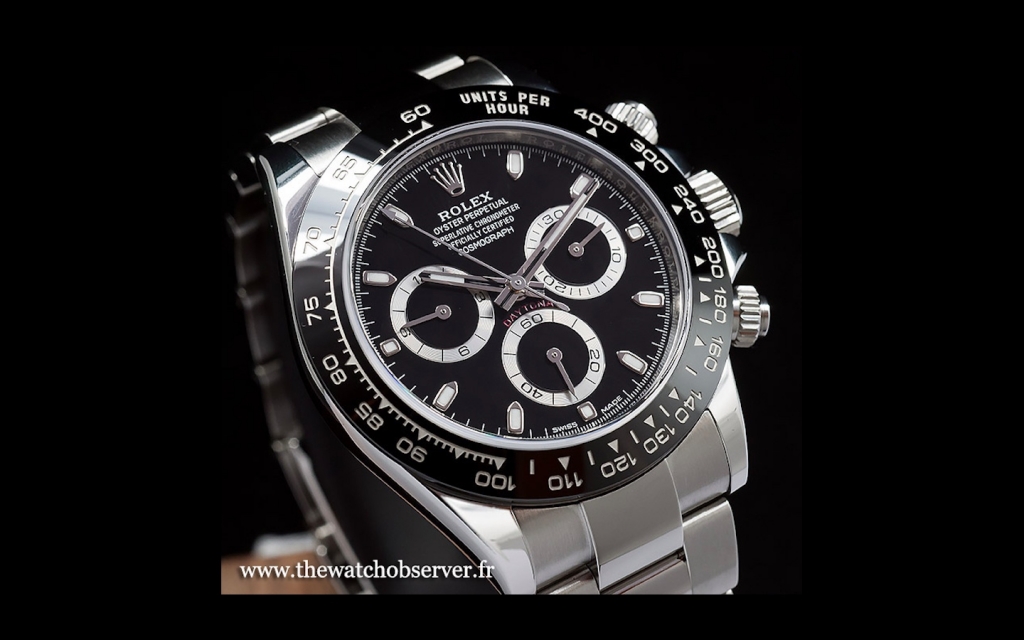 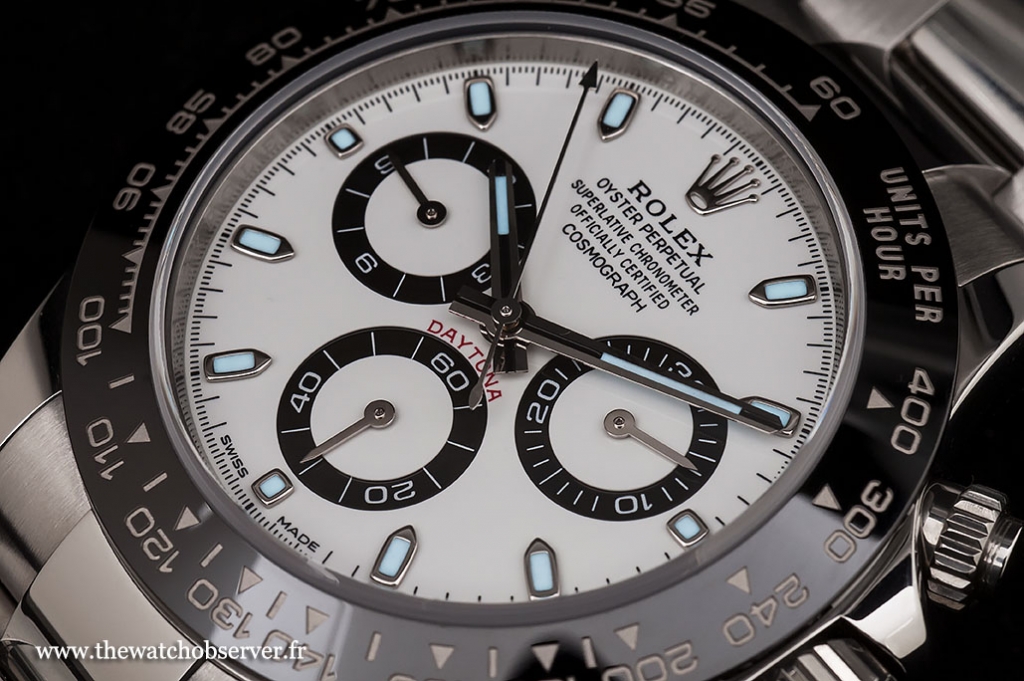 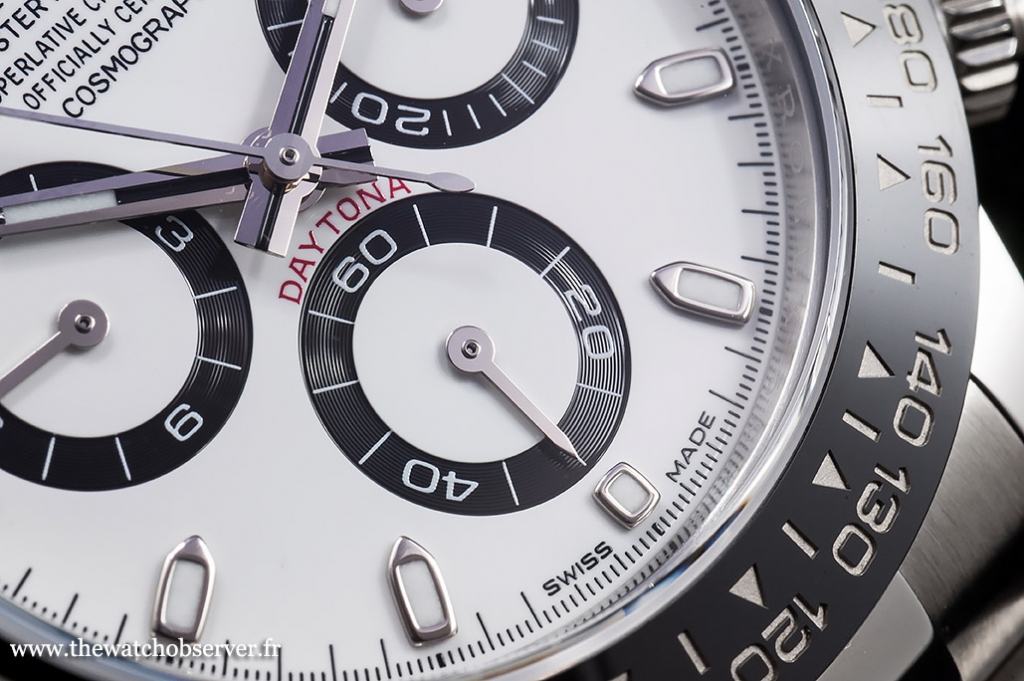 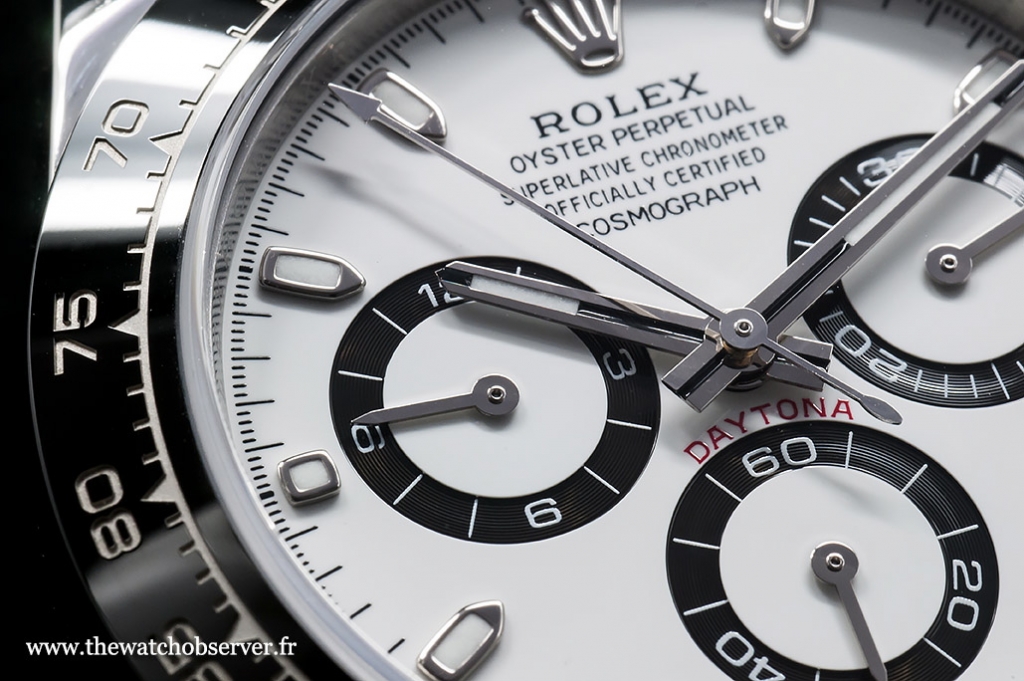 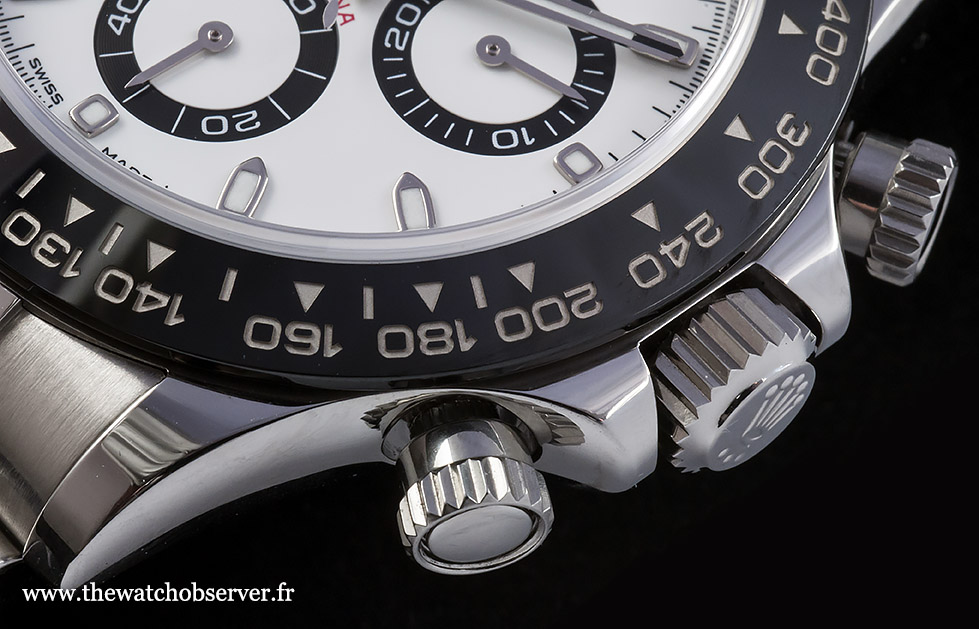 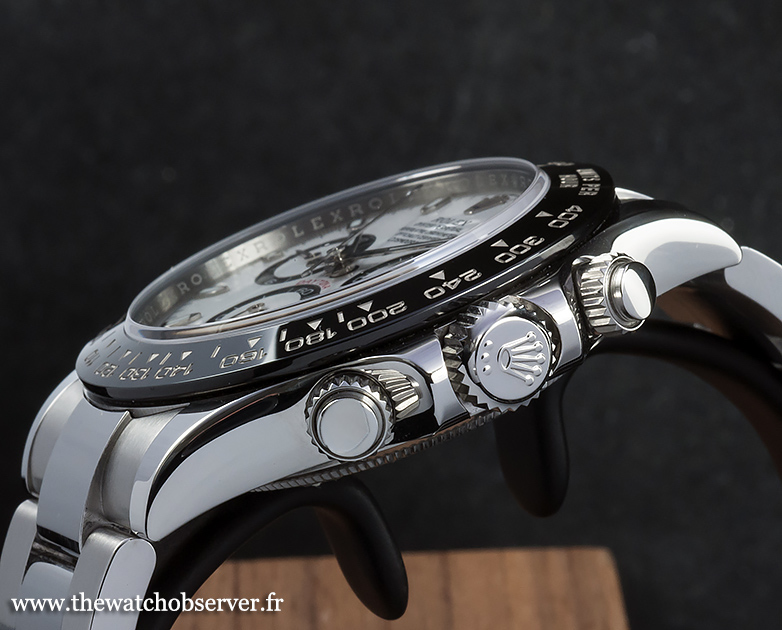 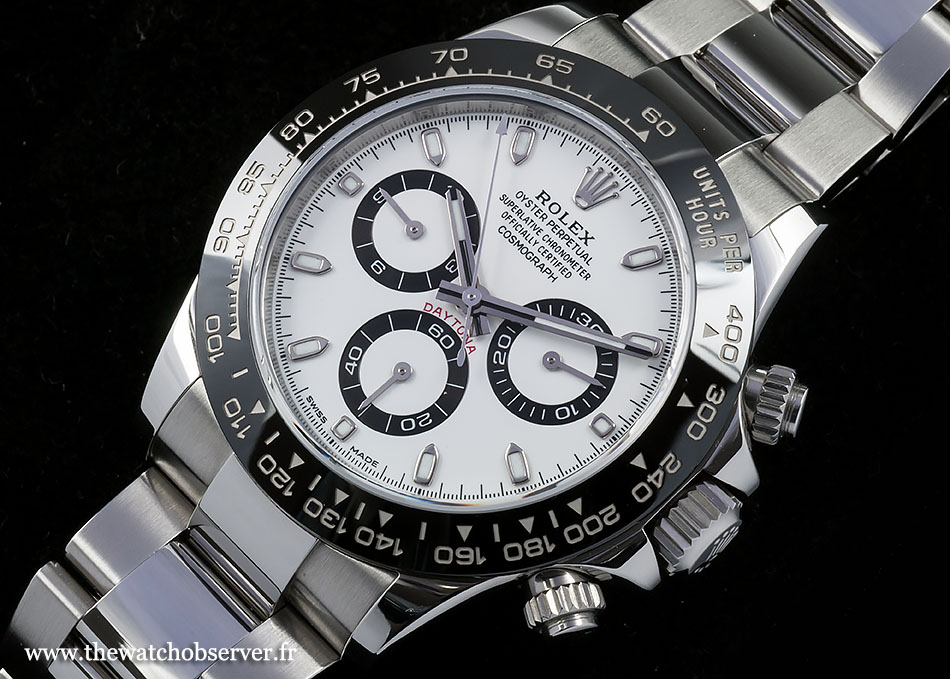 If there is one chronograph that has made its mark at Baselworld 2016, it is undoubtedly the Rolex Daytona – from its full name Oyster Perpetual Cosmograph Daytona.

This men’s sports watch, one of the legendary models produced by Rolex throughout its existence marks a milestone in the history of this model, whose appearance dates back to 1963.

Conceived from the outset to meet functional considerations – in particular readability – the Rolex Daytona has since 1963 been available in various versions, some of which have been – and are more than ever today – sold at gold prices.

For proof of this, just look at the START-STOP-RESET 88 Epic Stainless Steel Chronographs sale organized by Phillips on May 14, 2016.
This sale, which was held in Geneva, saw (among others) a Daytona Paul Newman Oyster Sotto 6263 from the late 1960s reach the stratospheric price of €1,800,000 and a Daytona Paul Newman Panda 6263, also dated 1969, find a buyer at €840,000 – prices that naturally leave most of us wondering!

Common denominator between these two chronographs?
The presence of a black tachymeter scale on the bezel.

It is precisely in order to pay homage to these references of the past that the brand new Rolex Daytona is now equipped with a bezel of the same color.
However, Rolex enthusiasts are well aware that the brand is not in the habit of looking in the rear-view mirror of its rich history, and even less of reissuing old models.

Instead, it looks to the future with subtly evolving collections.

The best illustration of this is undoubtedly the Cosmograph Daytona produced by Rolex for the 50th anniversary of the model.
While collectors were waiting / dreaming of an anniversary chronograph inspired by the past, Rolex created a surprise by releasing a platinum version with a ice-blue dial and a brown ceramic tachymeter bezel.

In the end, it took only three more years for this wish to become reality with the presentation at Baselworld 2016 under the reference 116500LN.

Enthusiasm is such that the waiting list of some Rolex dealers goes far away and should continue to grow, no doubt resulting in speculation such as the one experienced with the previous reference.

The origin of this enthousiasm lies in three main points which constitute the three strong points of this new version.

Following on from the 2013 platinum version, the Dayto 2016 features a one-piece ceramic Cerachrom tachymeter bezel.

The only difference is that the bezel is now black.

The interest of this choice is threefold.

First of all, it reminds us of the vintage Daytonas that collectors today are tearing off on the second-hand market or in auction rooms.
It should also overshadow the Rolex customization specialists whose work often revolves around vintage models.

It then replaces the polished steel tachymeter scale of the Daytona 116520 which, like all polished steel, was prone to micro scratches – a detail that often offended even the most meticulous, if not the most maniacal, collectors.

The worry is now eradicated with the call for a ceramic bezel – a material known for its extreme scratch resistance.

It finally brings contrast to this face while limiting the slightly shiny side that some people found on the 116520 reference.
Limit is the right word as this new monobloc Cerachrom bezel made of high-tech ceramic has a polished finish that probably classifies this new Daytona in the luxury chronograph category and not in the toolwatch one!

Continuing in the high-end register, the graduation of this new tachymeter scale is obtained by depositing a thin layer of platinum in a hollowed-out area using a PVD (Physical Vapor Deposition) process, whose silvery tint contrasts effectively with the black of the ceramic.

Although Rolex has decided to pay tribute to its legendary chronograph, the Geneva-based company is not proposing a reissue.

Thus, the brand does not choose to dress the tricompax dial of this new 116500LN with entirely black counters as it is the case for example on the reference 6263.

On the other hand, it opted for aesthetic harmony and enhanced readability by offering black strapping for the counters (versus silver strapping for the 116520) and, as with the previous reference, a circular guilloché pattern – the resulting contrast reminiscent of vintage models.

Consistent, perfectly executed and highly functional, the dial of the new Cosmograph Daytona also echoes the five lines of literature of the previous reference.
A choice that some will probably regret. Like me.

Caliber Rolex 4130 :
A racing beast for a versatile chronograph

The other strong point of this Daytona 2016 version lies of course in the mechanics this self-winding watch carries – in this case the 4130 caliber.

This mechanical self-winding chronograph movement designed and produced by Rolex is one of the most reliable, resistant and accurate on the market.

These different qualities were reinforced in 2015 with the implementation by Rolex of a new Superlative Chronometer certification.
If the 4130 is first chronometer-certified by the COSC (tests undertaken on the movement without its oscillating weight by the Contrôle Officiel Suisse des Chronomètres), this automatic watch in its final version, with its encased movement, undergoes a battery of tests at Rolex that attest to the seriousness of its design.

To achieve such reliability, this column-wheel chronograph incorporates the latest innovations from Rolex in this field: a vertical clutch that limits loss of amplitude once the chronograph function is engaged, an anti-shock and anti-magnetic Parachrom balance-spring and a stop-second.

Its ease of use is also up to expectations: the chronograph function will indeed give you a lot of pleasure with a clear but unctuous start, stop and reset.

The last strong point of this new Cosmograph Daytona, after its seductive design and high-performance movement, is its quality/price ratio.
Rolex has indeed had the wisdom to offer it at a price only $400 higher than the reference it replaces in the catalog, the 116520, when first launched.

Available at the retail price of $13,150 in 2021, it will be difficult to find on the market a chronograph combining good workmanship, reliability and reputation capable of competing with this Daytona 2016 version.

Finally, and because you don’t change a winning team, some of the attributes of the Daytona 116500LN are identical to those of the 116520.

Fans will find on this new version the famous screwed chronograph pushers that prevent accidental starting or stopping of the chronograph funtion, as well as a screw-down crown – all of which allow the model to be water-resistant to 100 meters.

Like its predecessor, the Daytona 2016 is as versatile as ever and, like its predecessor too, is also extremely comfortable to wear – in particular with an Oyster strap with Oysterlock safety clasp and Easylink quick extension mesh.

By unveiling this new Cosmograph Daytona at Baselworld in 2016, Rolex has struck another big blow.

Revisiting its past with moderation and intelligence, the brand with the crown logo delivers a Daytona with vintage accents but whose design and reliability are undoubtedly in line with the 21st century.

Particularly desirable in this version with a white dial, this Rolex Daytona 116500LN is certainly a real financial investment that combines the pleasure of wearing a legendary watch with the guarantee (or almost) to get a good price if one day you have to part with it!