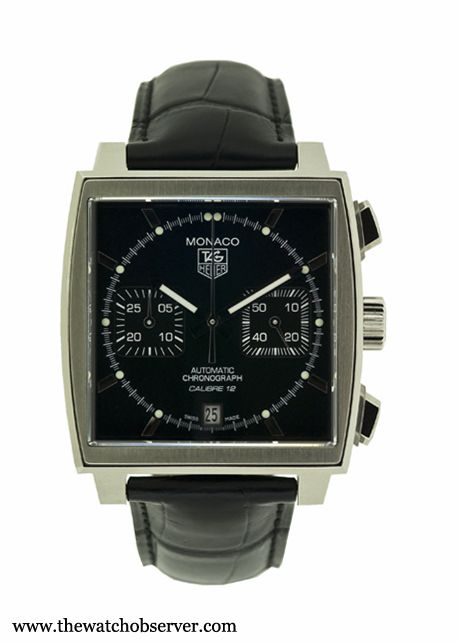 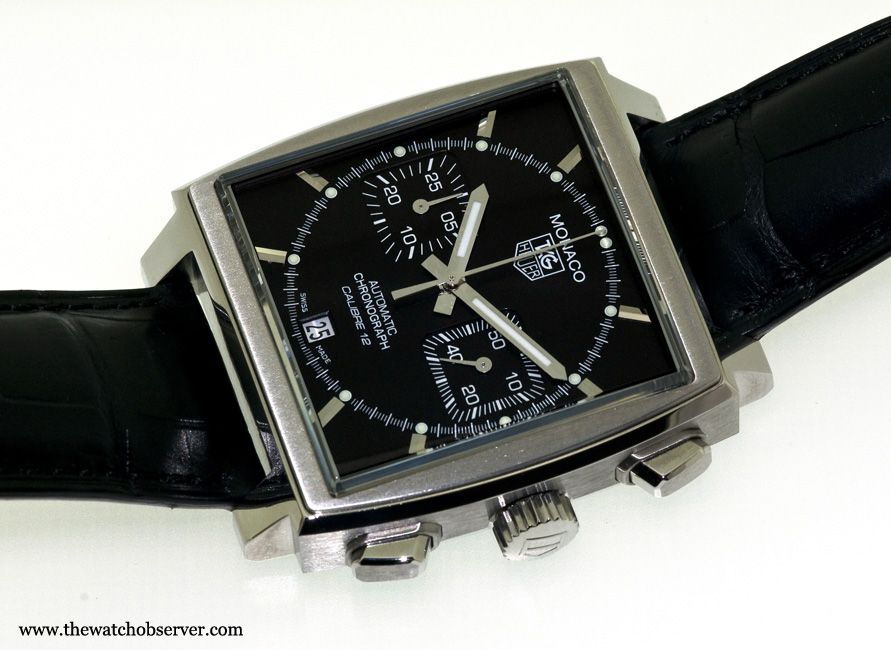 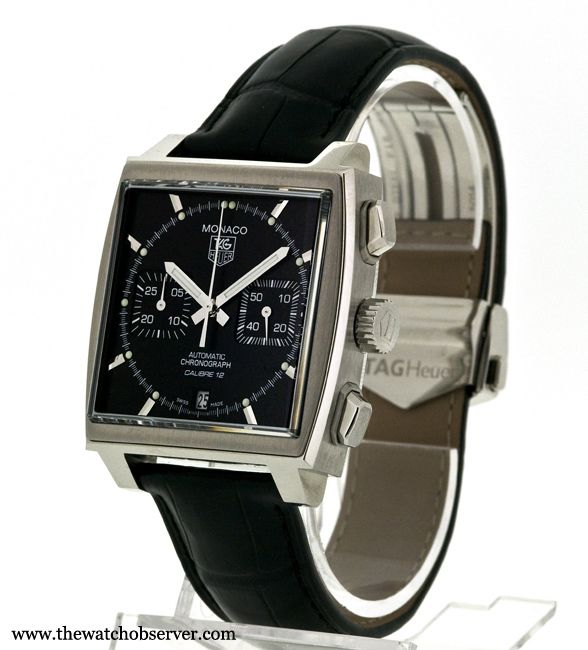 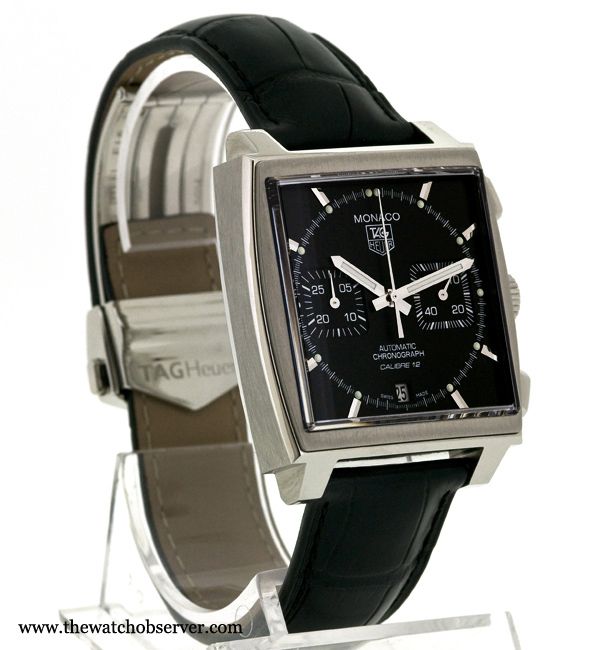 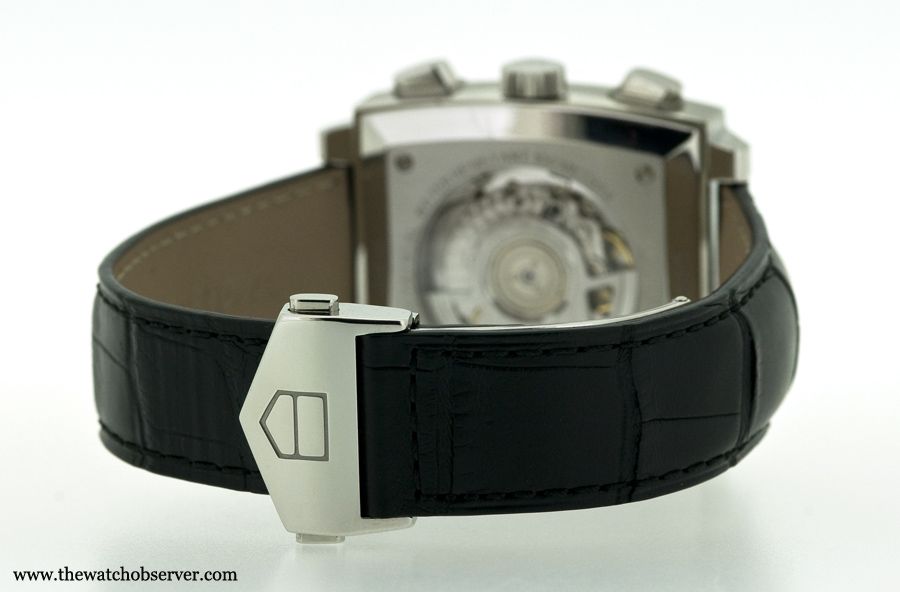 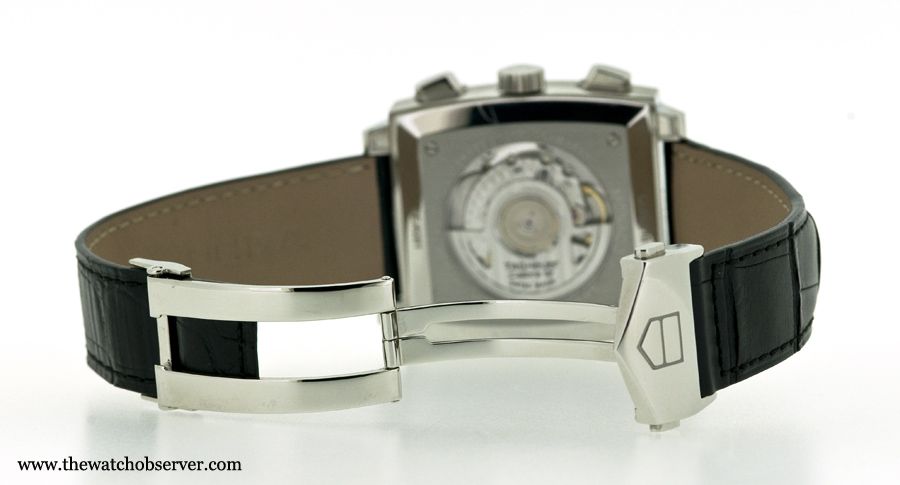 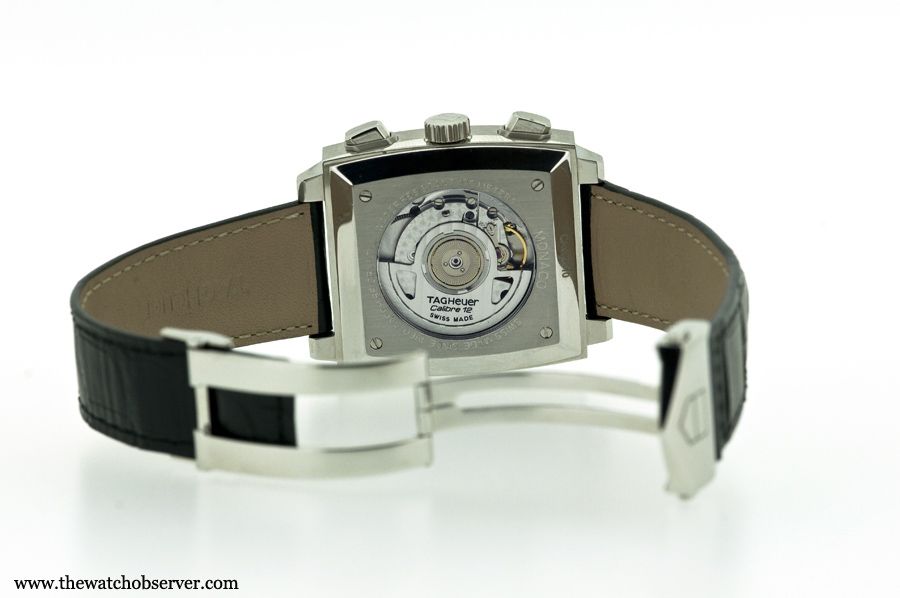 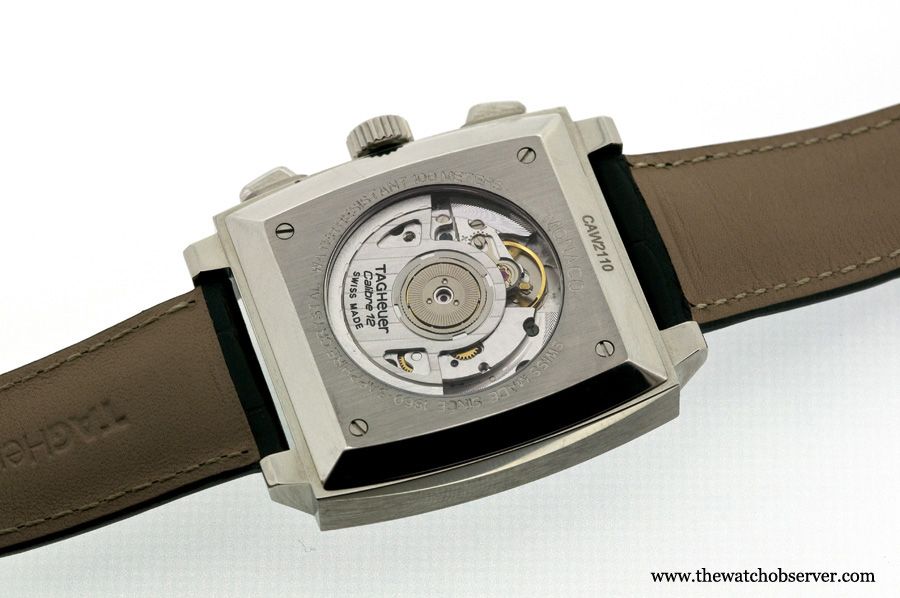 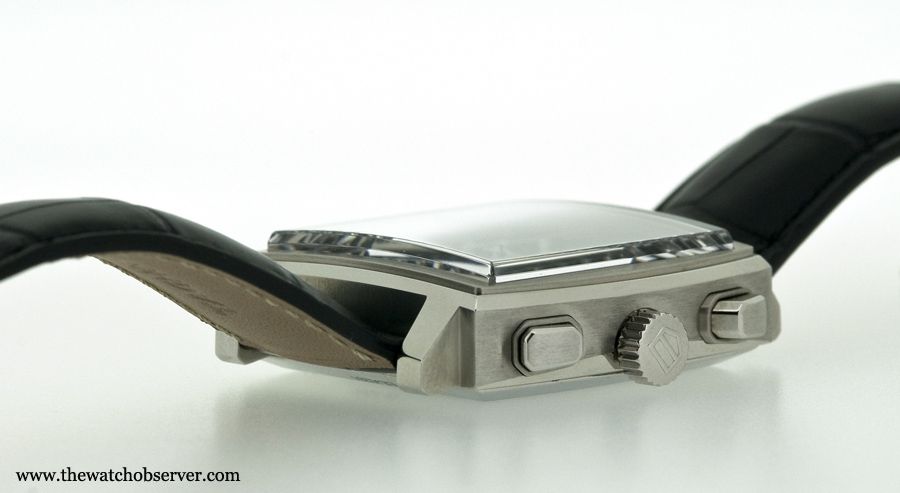 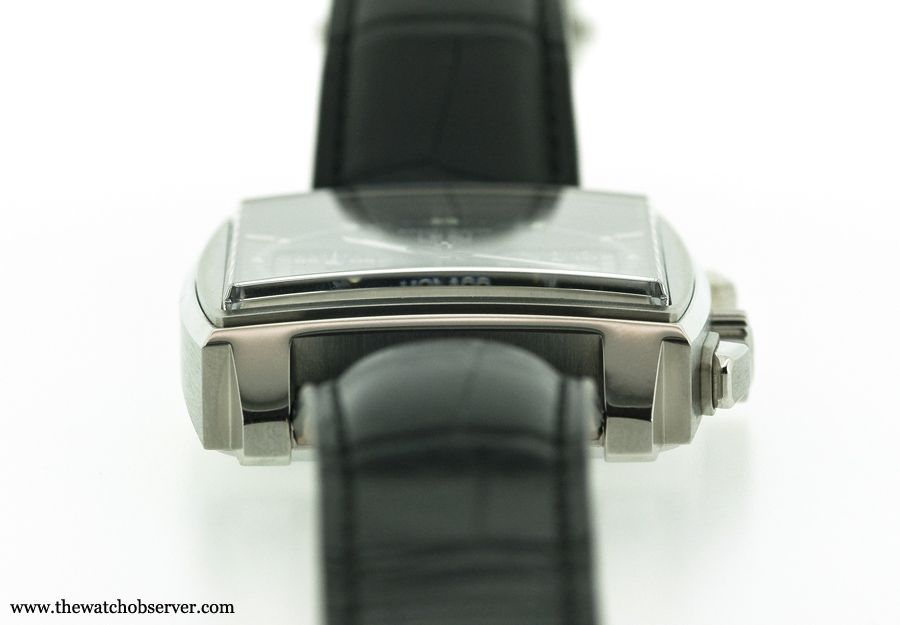 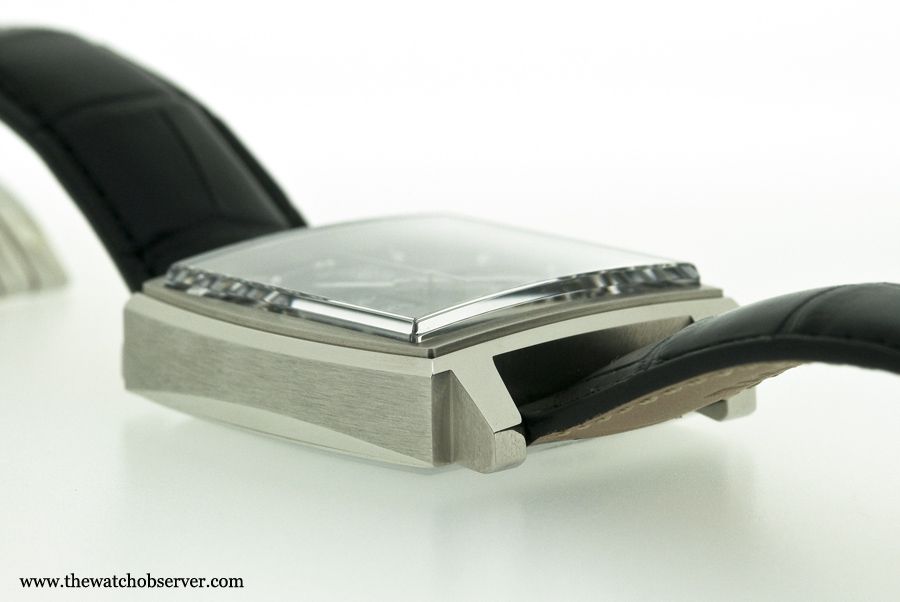 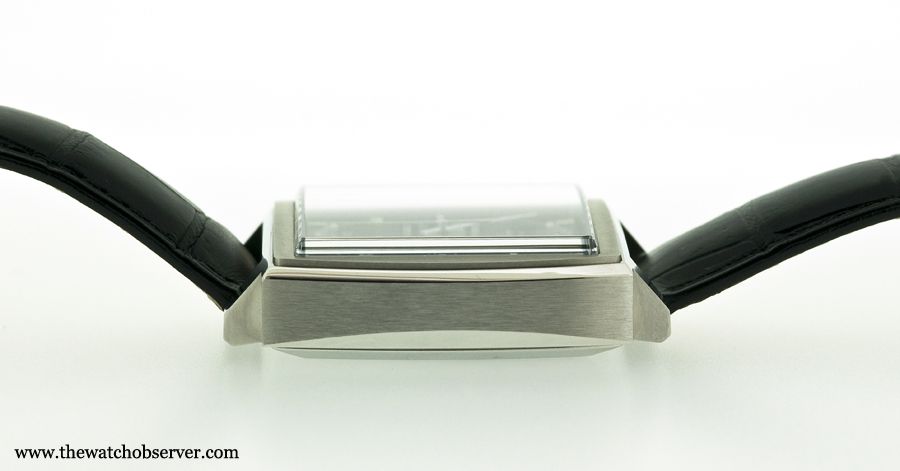 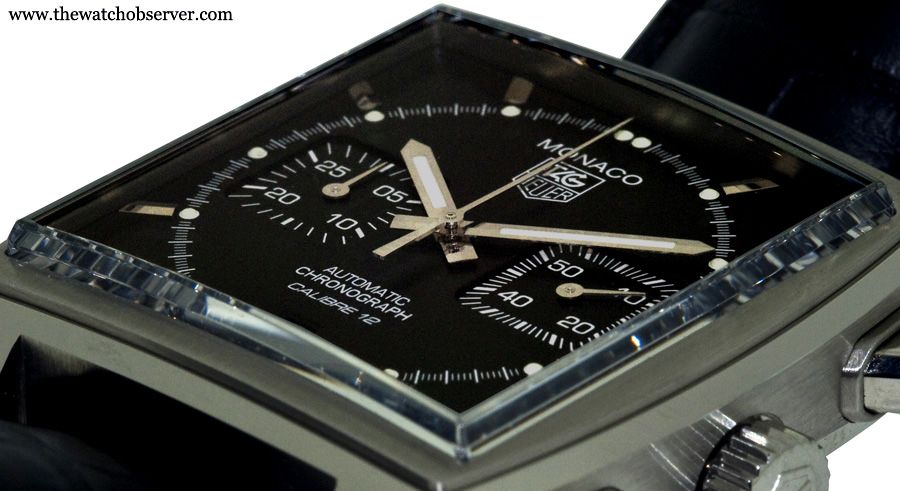 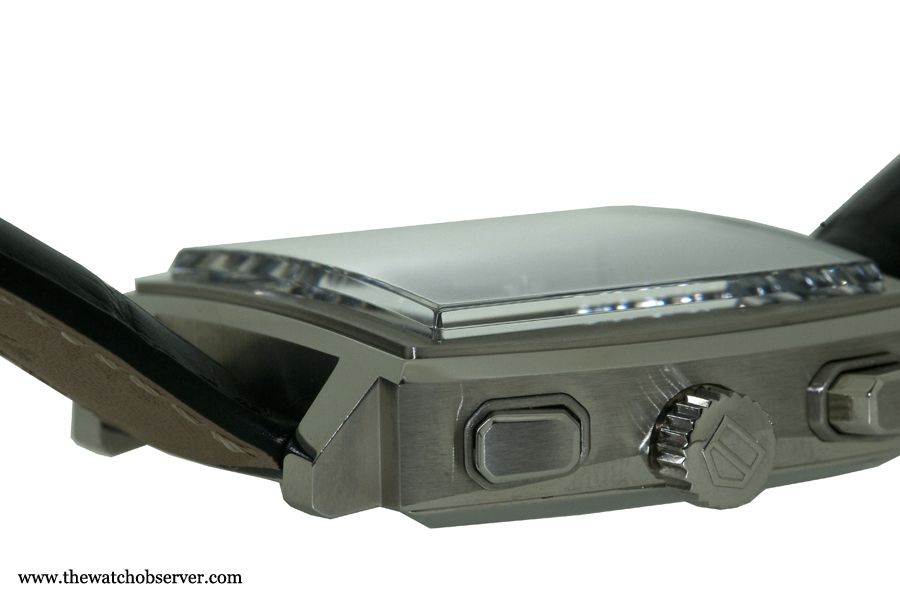 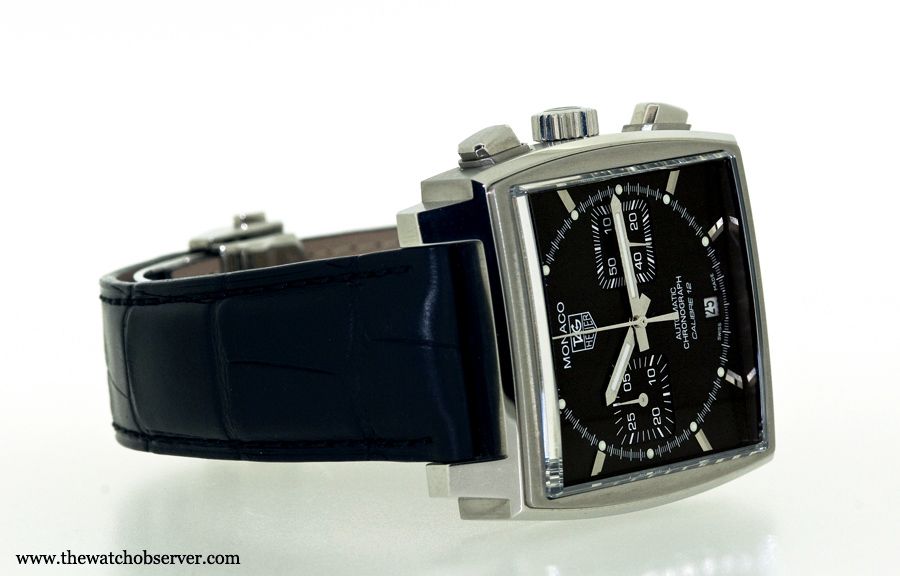 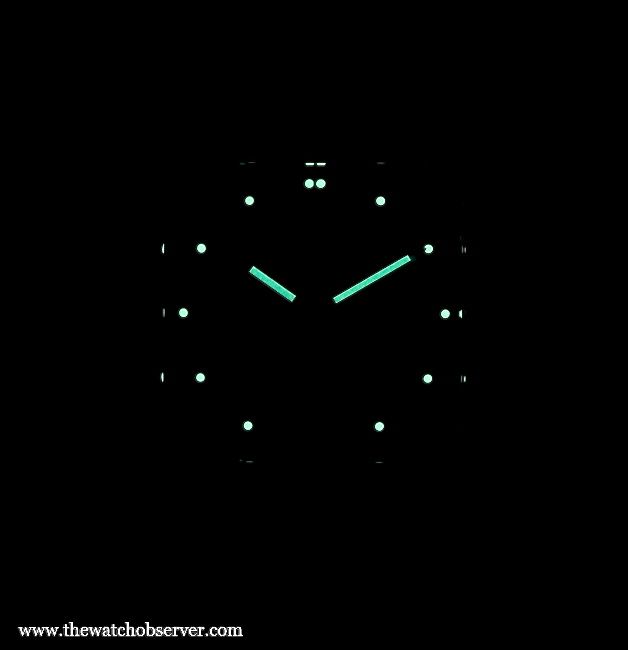 Presented in 1969 with the automatic chronograph “caliber 11” movement produced by Dubois-Depraz and Buren (for Breitling, Hamilton and Heuer-Leonidas), the Monaco remained in the Heuer catalog during a part of the 1970’s.
Then it was put aside, as many of its competitors.

TAG Heuer launched again this model in 1998 and has quite largely declined it since.
The range has been renewed two years ago.

This is the case with the tested model: a “full-dressed Monaco”, with its black dial and its leather strap of the same shade.

The preservation of the Monaco line, which successfully distinguishes it from its competitors, does not preclude a well-conceived work on the details.

The basis of the case benefits a rounded chamfer that lightens it.
The dual-face crystal with anti-reflective coating is similarly chamfered.

With the alternations of polished/brushed finishing and the faceted hands and markers, the whole is flattering.

TAG Heuer has preserved the system of a folding buckle by pinching.
When the strap is well-adjusted, the Monaco, of a reasonable size, can easily be forgotten.

The calibers 11, 12 and 15, developed in the late 1960’s and at the beginning of the 1970’s, even if they were not “great watch making”, were interesting thanks to their architecture (a chronograph’s module set to a Buren micro-rotor automatic movement) and their novelty.

The actual movement of the Monaco claims filiations with its ancestors by taking over the name “caliber 12”. And indeed, it is also a Dubois-Depraz module, set on an automatic movement, namely an ETA 2892-2. 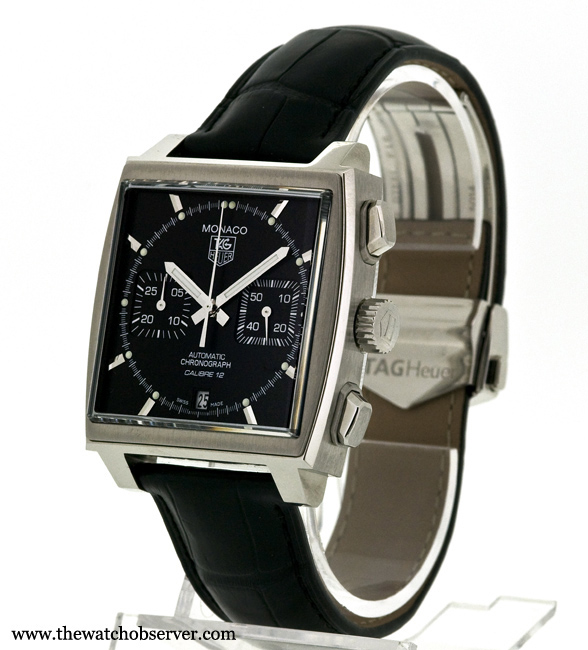 The comparison ends here. The actual module is installed differently and does not benefit the aura attached to the novelty of its 40-year-old predecessor.

As for the 2894-2 supplied by ETA between 1998 and 2009, the complication plate Dubois-Depraz, set on the 2892-2 suffers several flaws: slight jump of the seconds hand of the chronograph when starting it, shuffling hand for the minutes counter and firm push-buttons.

The Steve Mc Queen’s fans willing to measure the length of their coffee’s percolation or the average speed of the bus between home and work might thus be disappointed.

All the more that this Monaco does not include a tachymeter.

Conversely, the manual winding and the time and date setting are very comfortable.

Lastly, this new Monaco is waterproof up to 100 meters depth.
So you can fearlessly take a bath with it – provided that you change the strap first.
But you will not be able anymore to polish the glass of your TAG Heuer with toothpaste, such as it was possible in the past, the plexiglas being replaced on this version by a beautiful sapphire glass.

Born in the 1970’s as a chronograph evocative of the race, the Monaco remains, in this “smart” version, a serious competitor on the market of “sport/smart” watches.

ALL WATCH TYPES
THE MOST SOUGHT-AFTER BRANDS