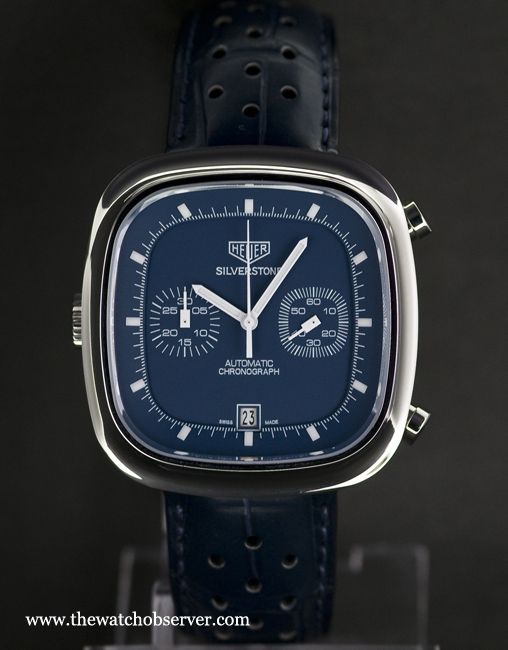 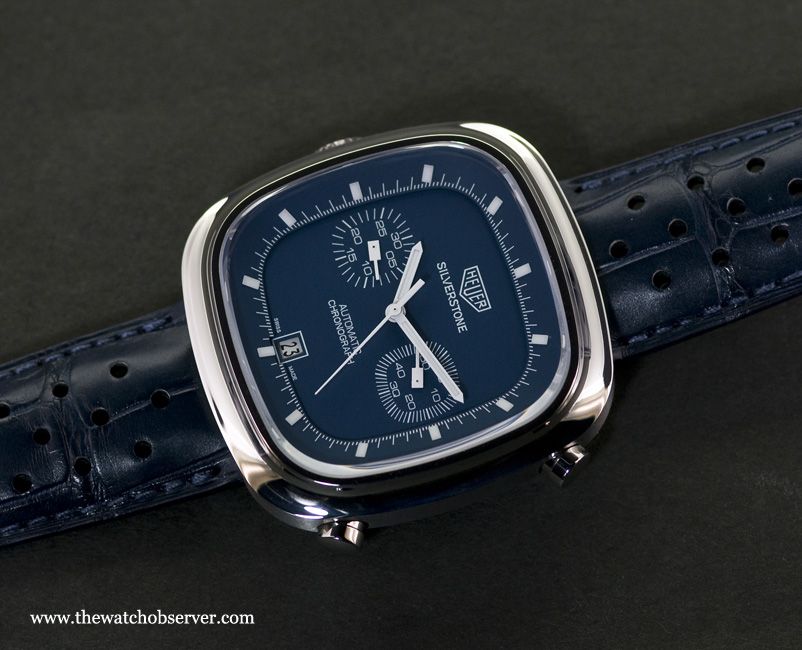 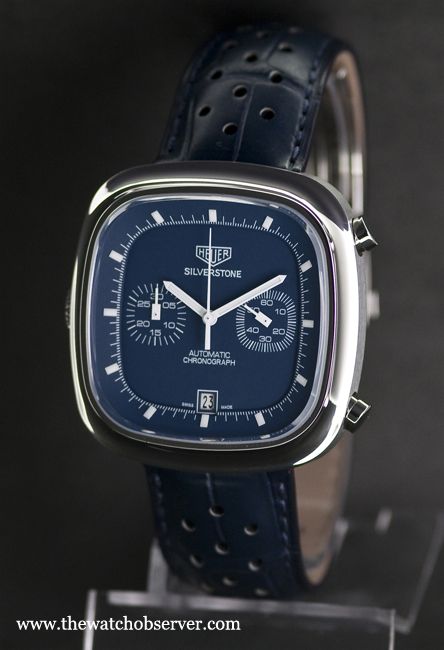 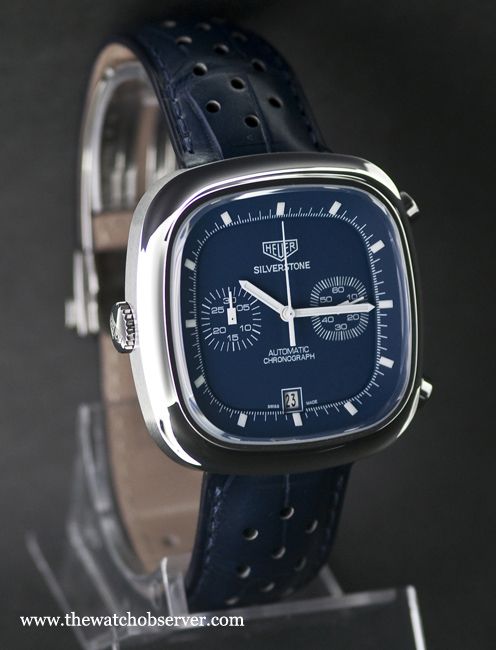 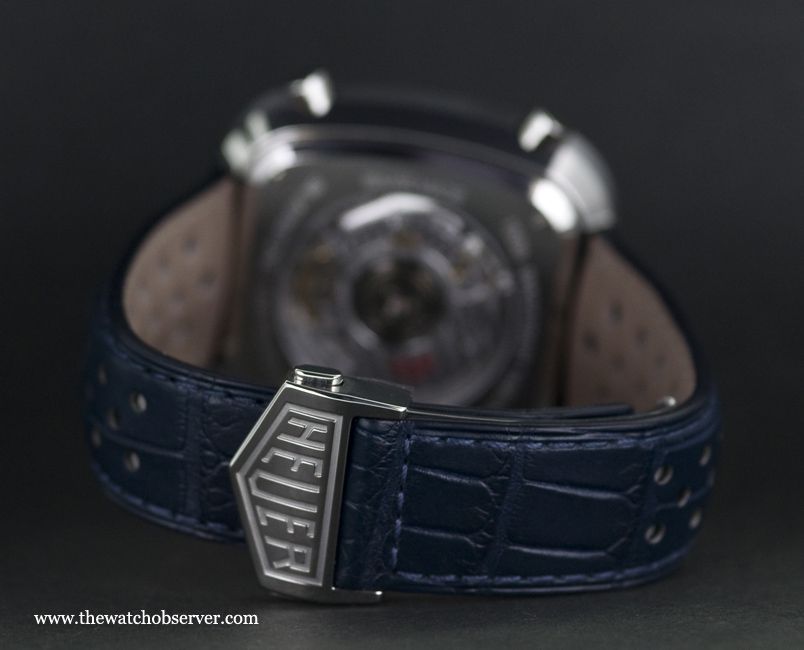 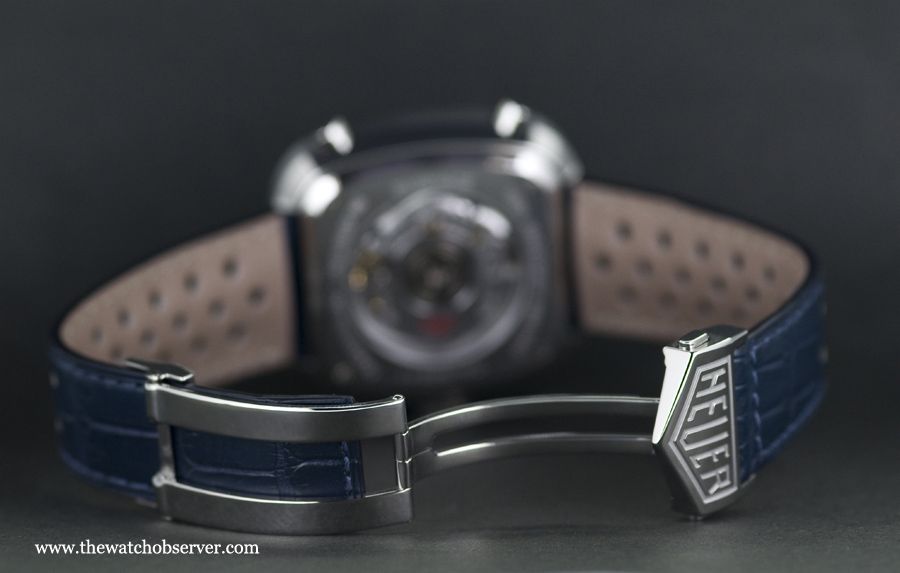 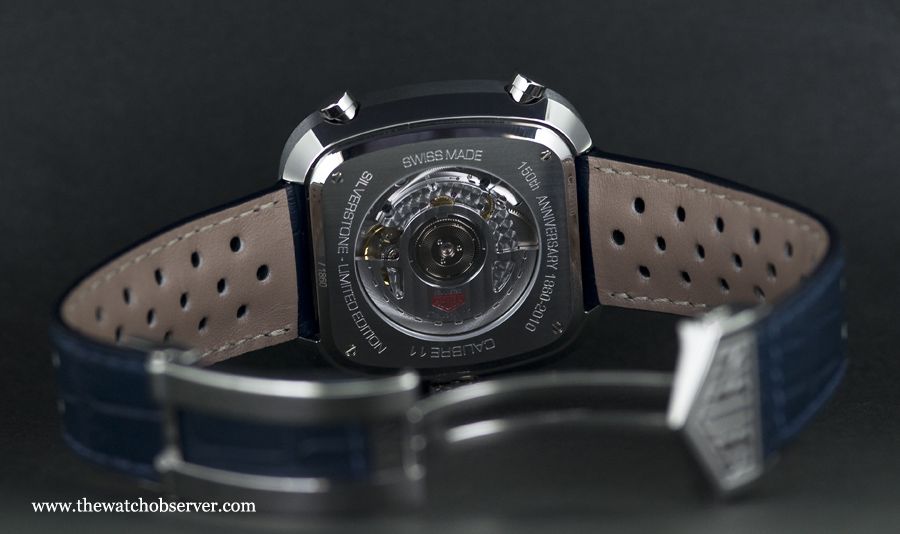 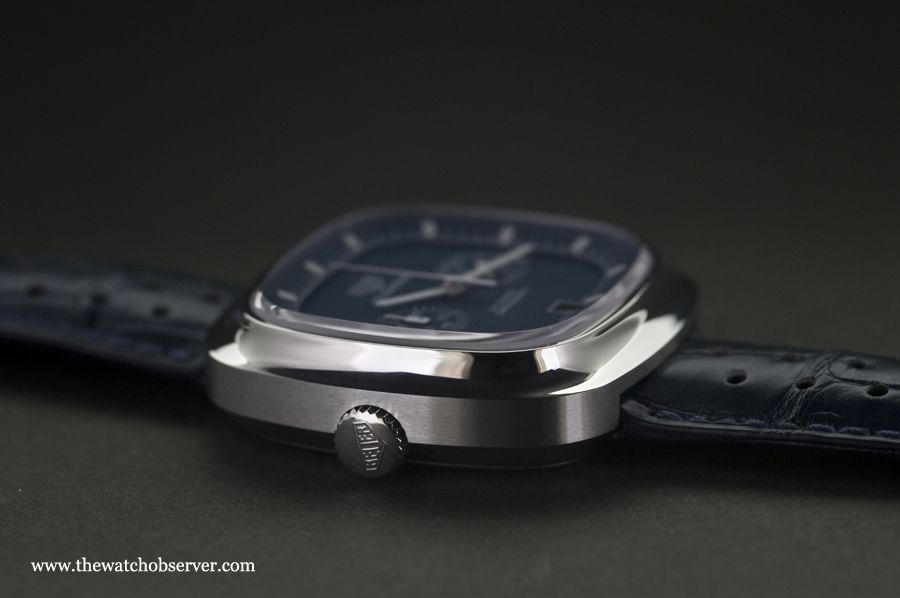 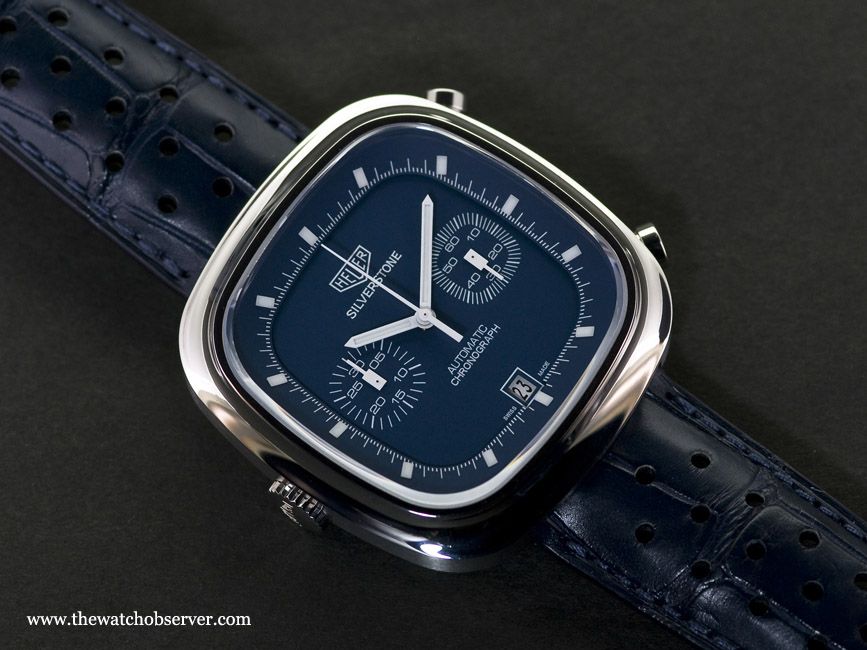 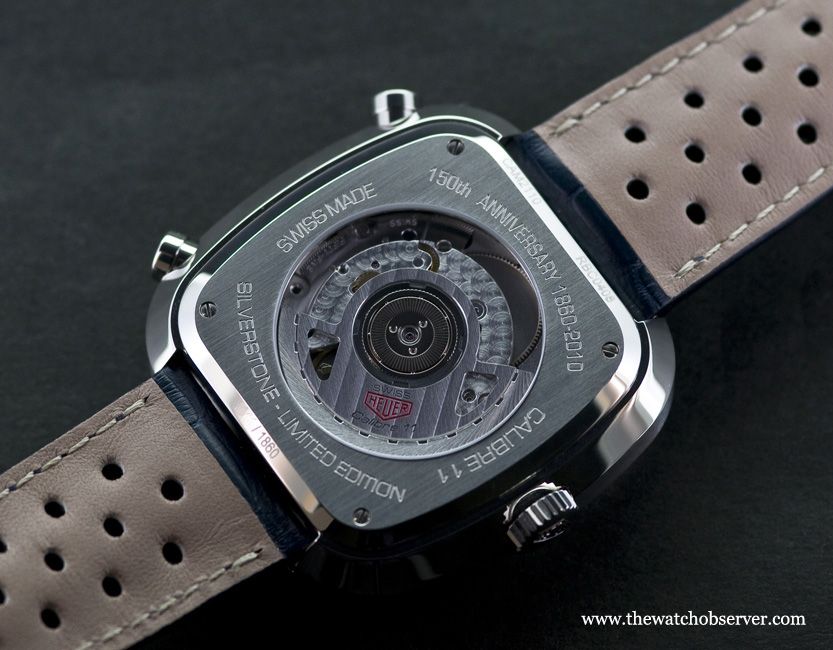 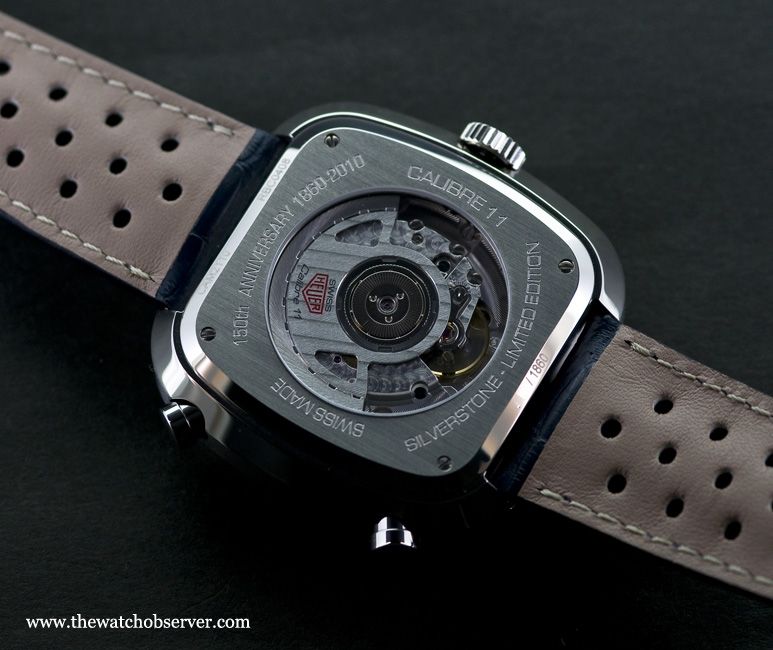 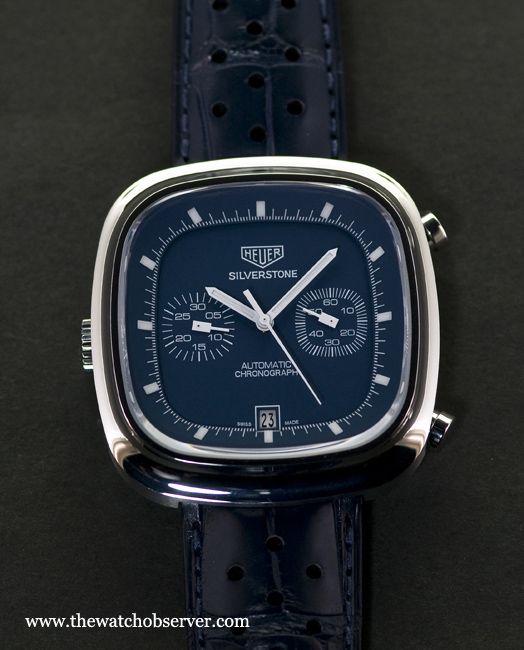 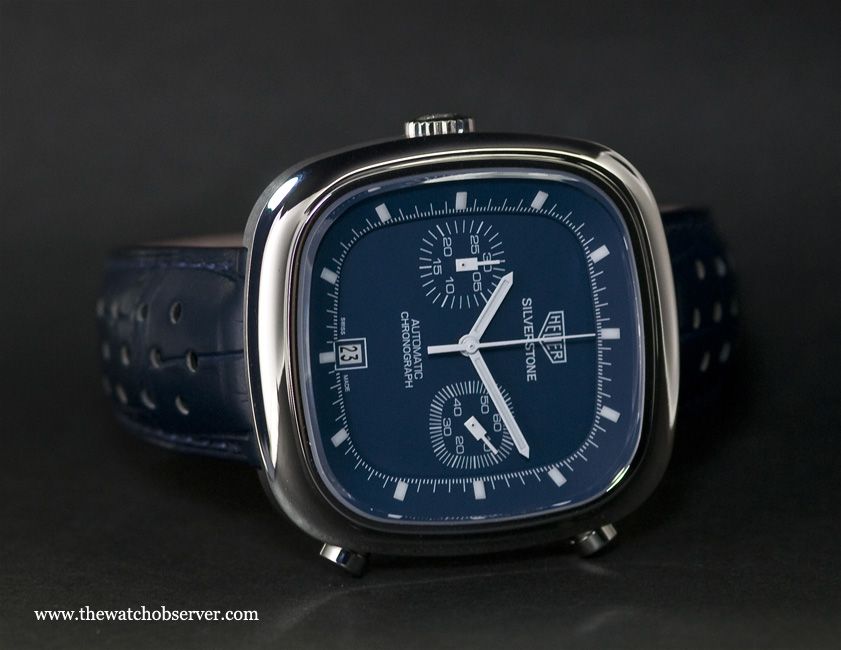 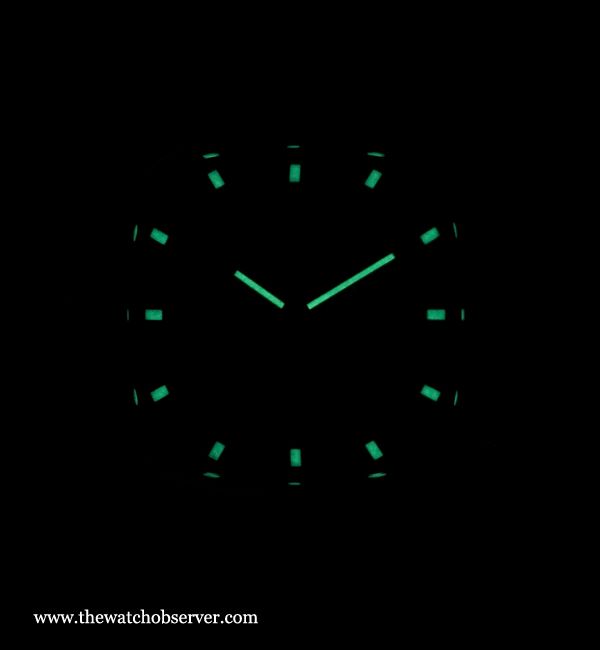 
Of the numerous race drivers from that era who have worn a Heuer Silverstone during competition, let’s name one, Emerson Fittipaldi, Formula One World Champion with McLaren in 1974, followed closely by Clay Regazzoni.
And it’s on England’s Silverstone racing circuit that many of these drivers became famous in the past.

What was so particular about this Silverstone chronograph that it merits being reintegrated today into the TAG Heuer catalog using a configuration that is quasi-identical to the original?

Simply put, a very unique and characteristic figure and design that cannot leave anyone indifferent: you either love it, or you hate it!

First off, this driver’s watch case is very unusual.

With its almost square shape, no lugs, and a strap that goes right into the main body of the watch, it offers us push-buttons for the chronograph on the right, and a crown on the left.

Its large and uncluttered dial, itself also square with rounded corners, is adorned with white hands that offer a stark contrast with the dial’s blue color.

The readability is thus excellent, night or day – knowing, as always with this type of case, that you have to take into consideration the distortion of the display in the corners for the reading of time.

The singular counter hands are syringe-shaped, with a design for their base that stays esthetically consistent by being similar to that of the hourmarkers.

The enlightened connoisseur will then notice one of the rare visual differences between the old version of the Silverstone and its current reissue in limited edition by Heuer: the chronograph’s 12-hour counter has been replaced by a small seconds counter situated at 3 o’clock.

As for it, the 30-minute counter has been moved from the right side to the left.
The reason will become clear when we get to the caliber.

On the other hand, the return of the original Heuer logo in an identical form will thrill those who are nostalgic, and the connoisseurs of vintage watches.
Lastly, the date display situated in a square window at 6 o’clock is well-balanced and discreet.

A vintage yet sporty chronograph

Viewed from its side, the brushed appearance of the flanks adds to the sporty feel of this TAG Heuer and contrasts visually with the polished bezel and the sapphire crystal.

The chronograph’s push-buttons seem to be at a surprising (slanted) but logical angle given the shape of the watch’s case middle.

On the opposite side, the winding crown is partially integrated into the case middle of the watch, thus avoiding being in the way in case its owner flexes his wrist.

In addition, again for the benefit of those with nostalgia for the older Silverstone model, the crown bears the old Heuer logo, as is the folding clasp. 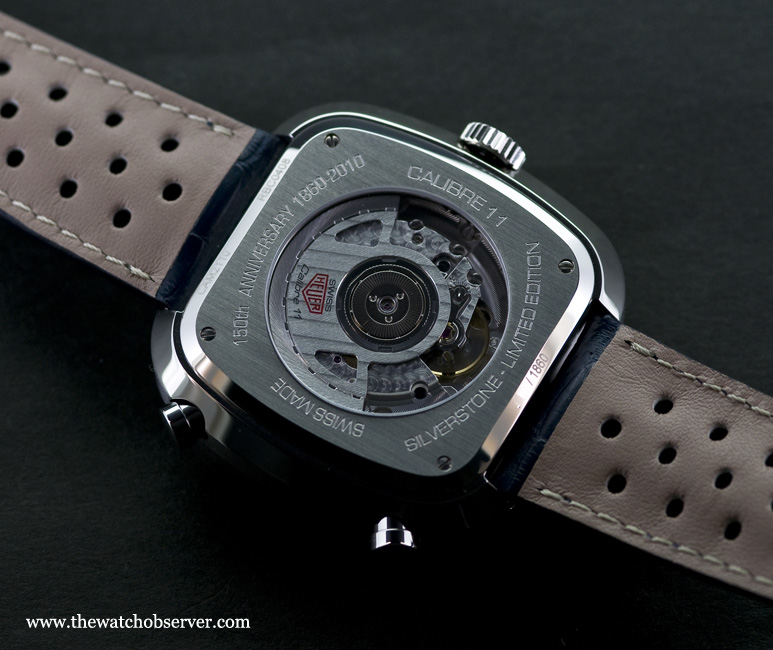 The perforated leather strap with its rally-style design emphasizes the sporty feel of this piece and ensures a good hold on the wrist, which is necessary given the volume and the weight of the watch!

Moreover, the folding clasp’ pinch positioning system, also found on the Monaco, gives the ability to adjust the length of the wristband to the nearest millimeter.

And contrary to what one might think, because of its dimensions, the Silverstone is still comfortable to wear.

Finally, the case back, nicely brushed and screwed-in, more than makes up for the sparsity of writing on the dial with an abundance of text, including the vintage of the piece on the 1,860 units that were produced.

The sapphire case back thus unveils the new “famous” Caliber 11.
Indeed, the original Silverstone was equipped with the old version of the Calibre 11.

It was at the time one of the first automatic chronograph calibers with a modular concept developed cooperatively between Dubois-Depraz, Breitling, Hamilton and Buren – with a winding mechanism powered by a microrotor.

The module for the chronograph function was positioned under the base movement and its design required the reversal of the push-buttons and the crown, each being positioned on its own respective base.

The new Calibre 11 preserves this original modular architecture, but it’s now reversed: the chronograph’s module, designed once again by Dubois-Depraz, is on top, facing the dial. And the ETA 2892 is underneath, facing the case back.

The handling of the chronograph is easy and comfortable.
As for the microrotor technology, it’s been replaced by that of a rotor, bearing the Heuer acronym engraved in red and adorned with Côtes de Genève.

With this Heuer Silverstone, TAG Heuer offers us a charming piece that’s halfway between history and design.

Now, like in the 1970’s when it was first released, its owner will handle its strong presence on the wrist and its atypical personality.