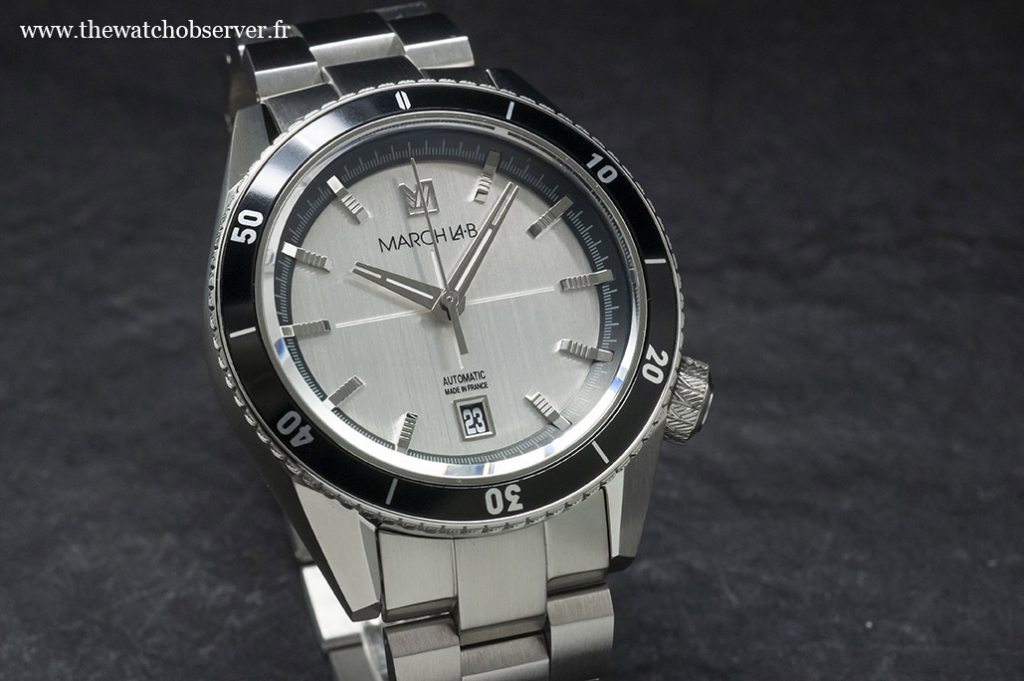 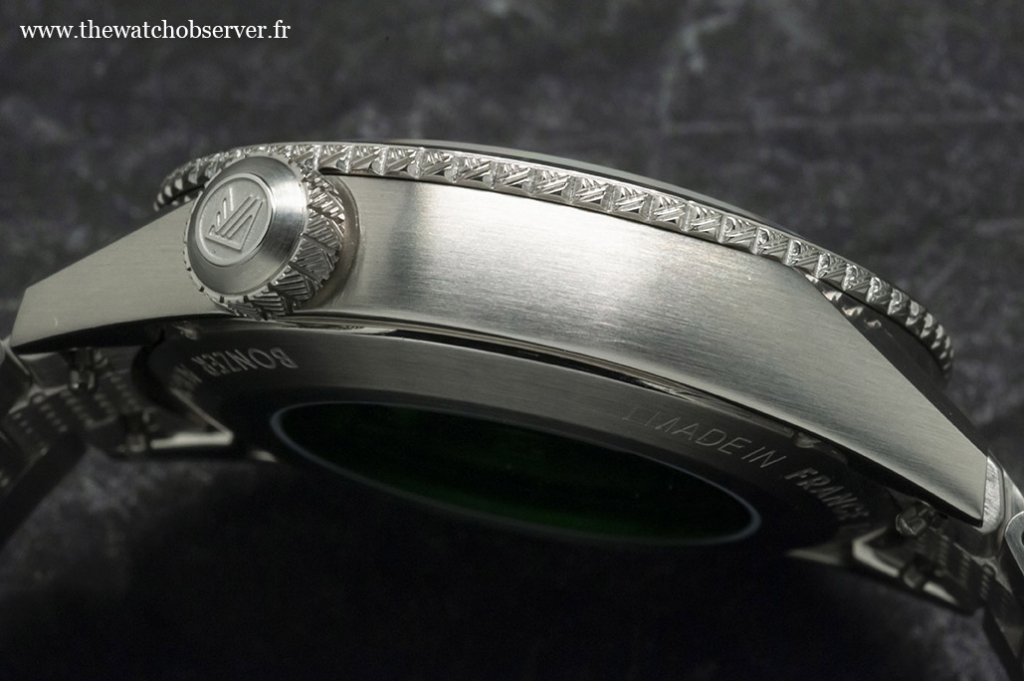 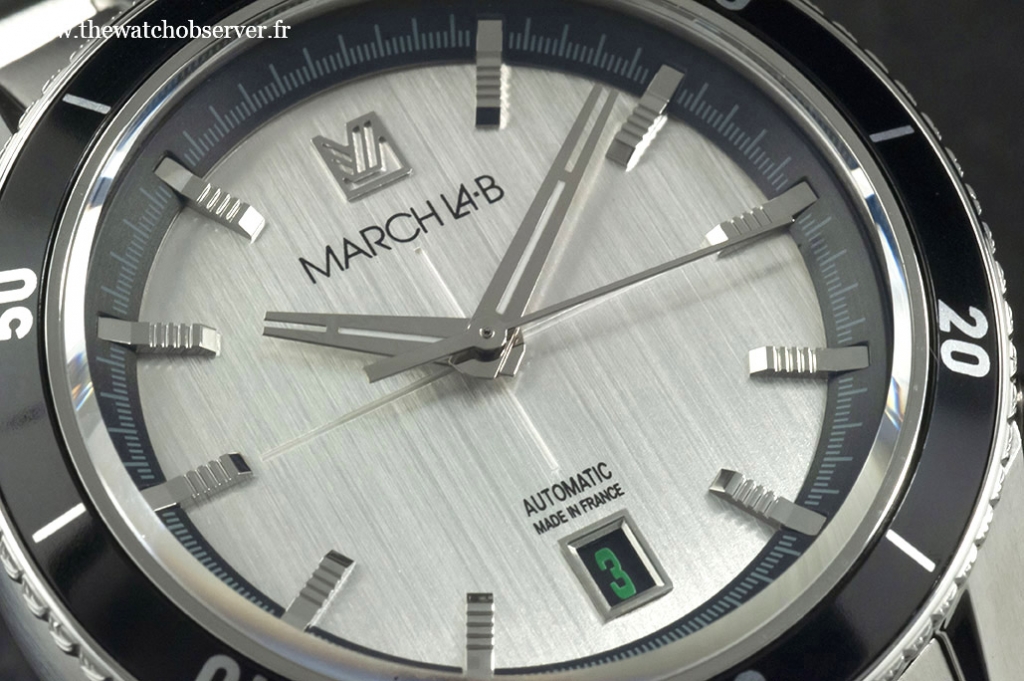 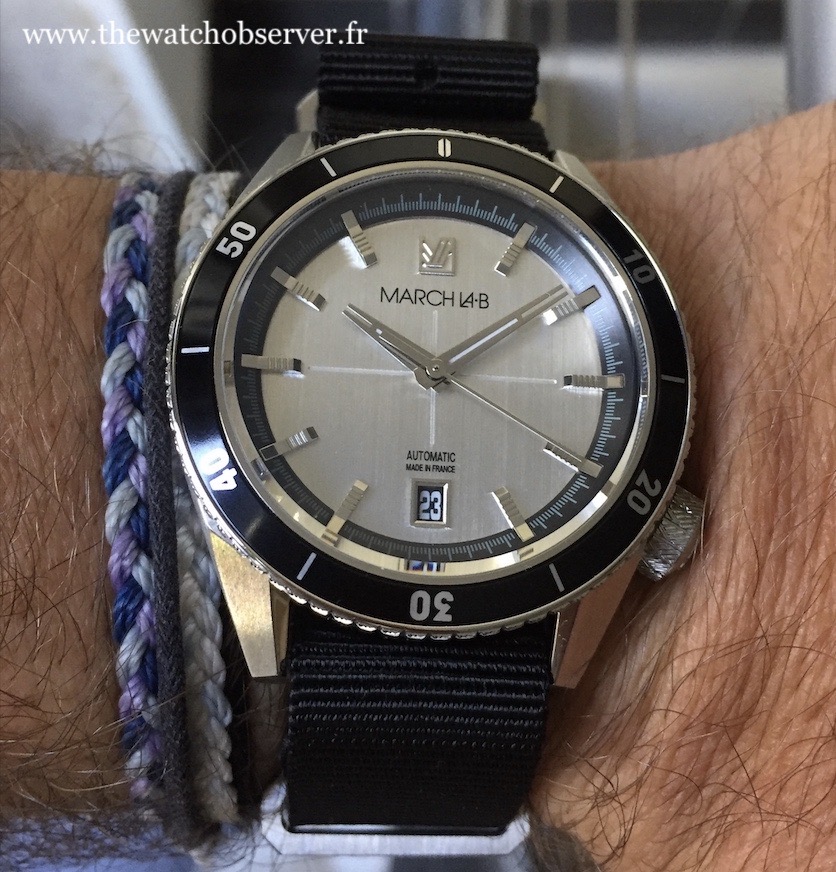 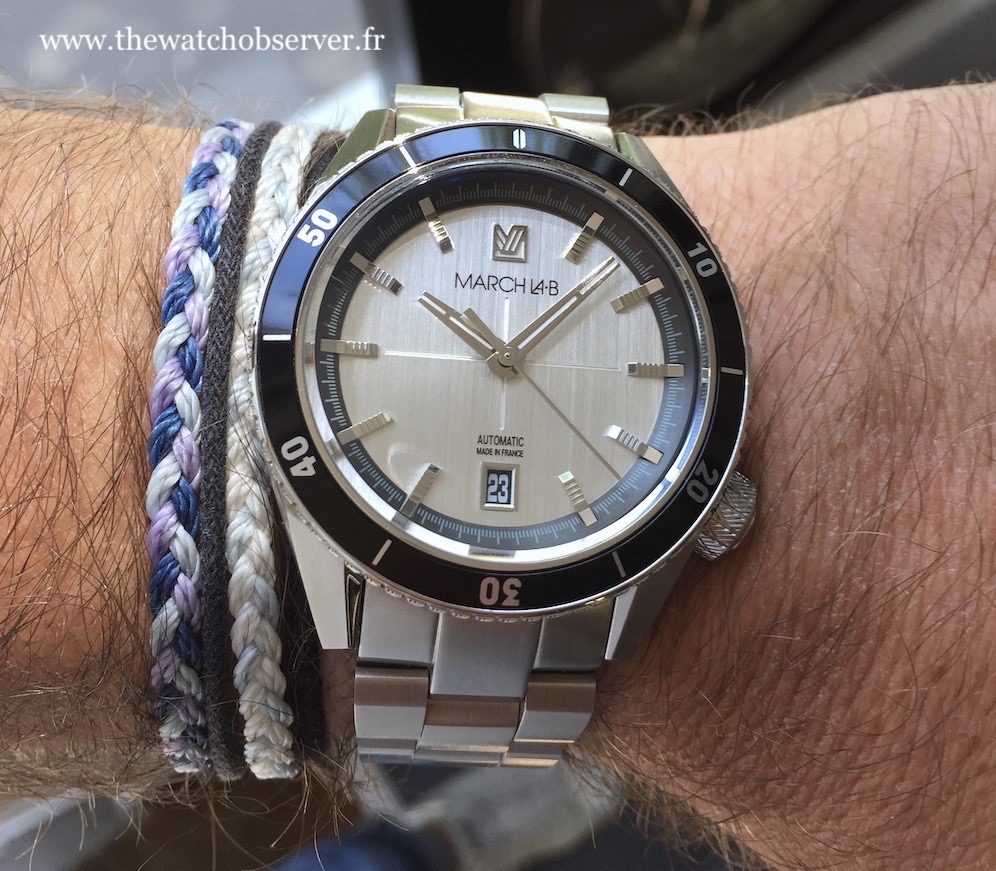 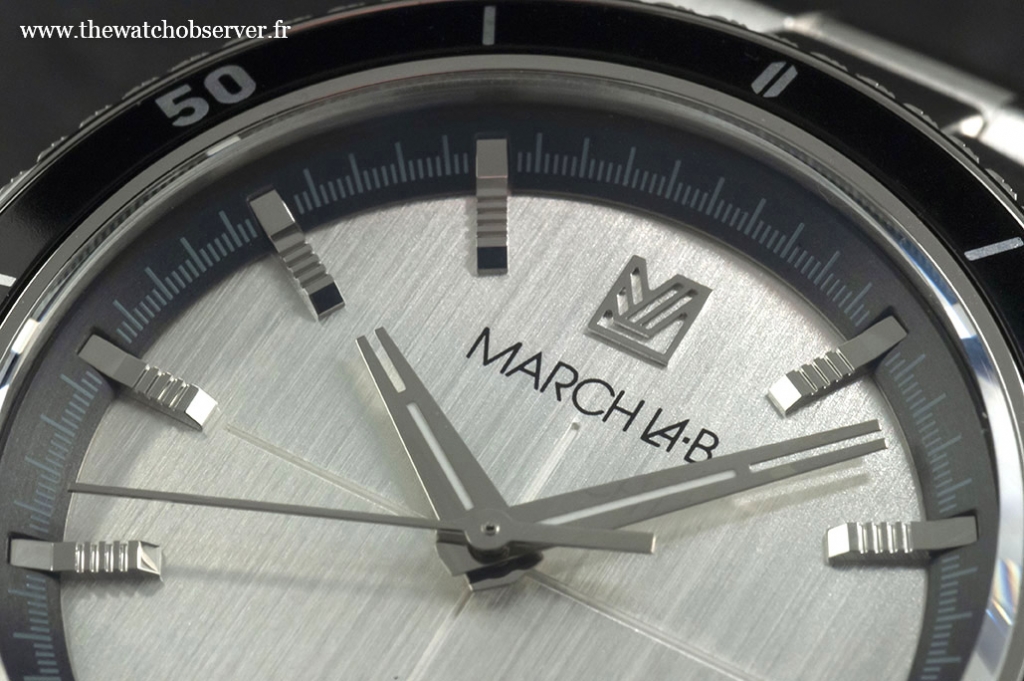 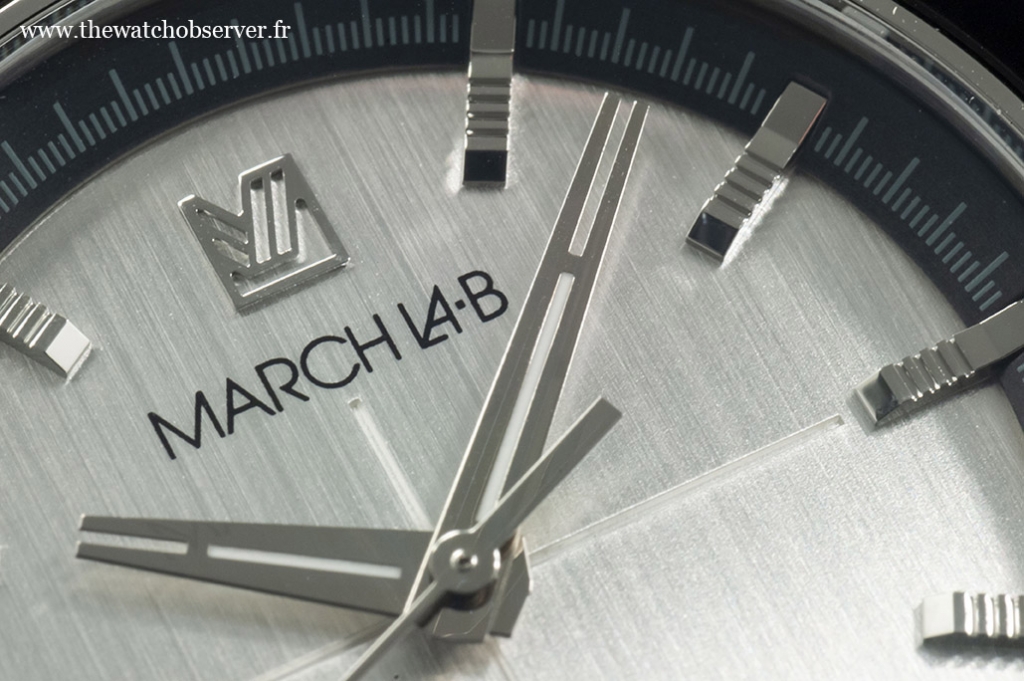 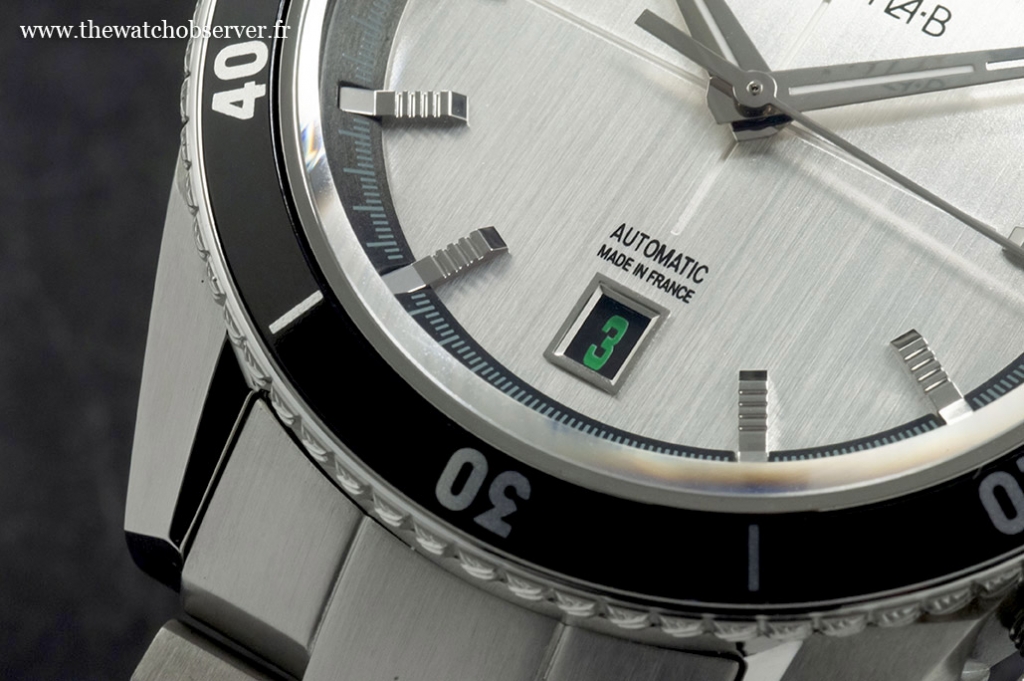 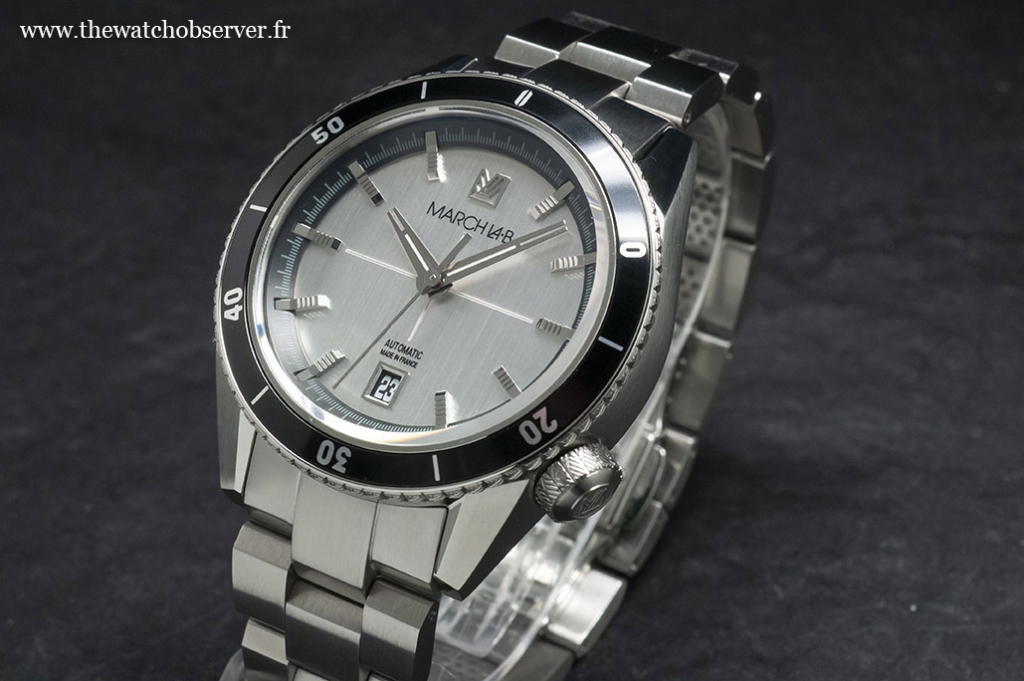 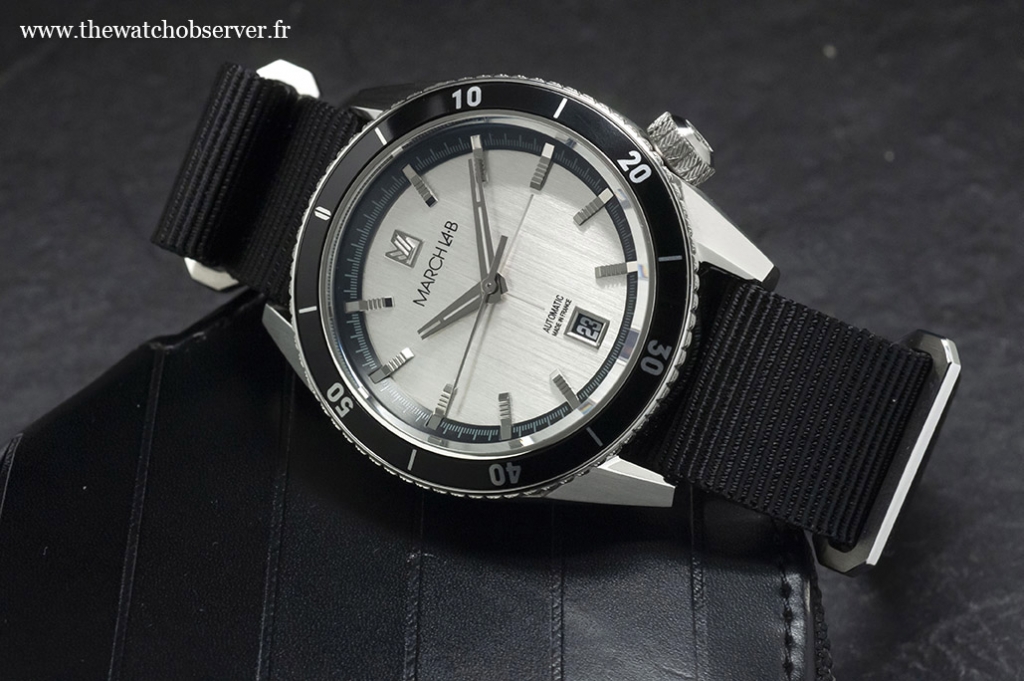 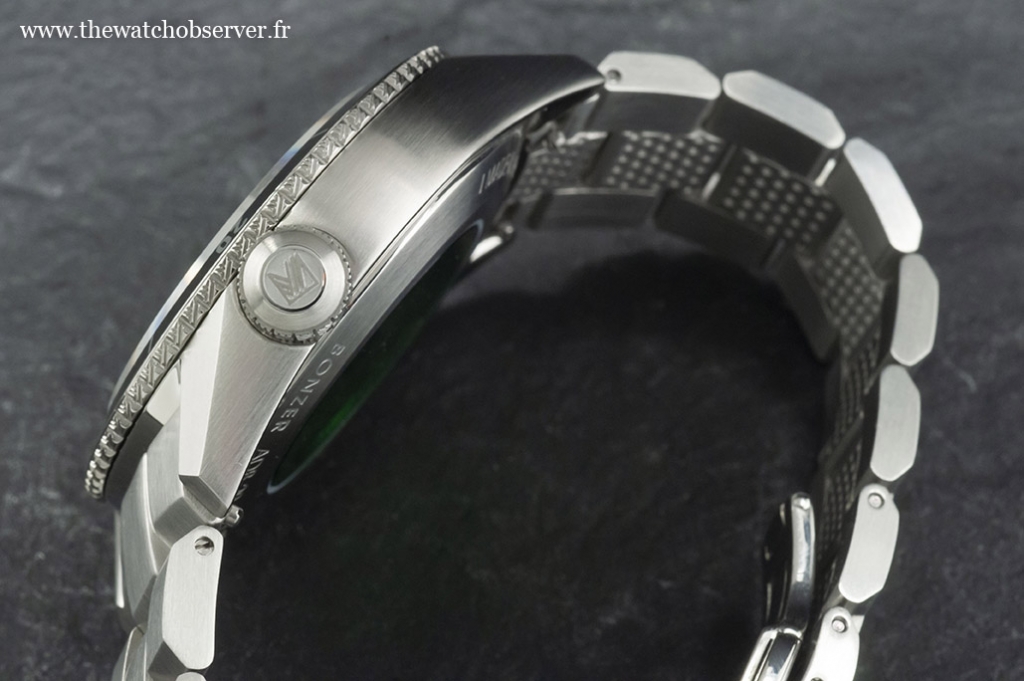 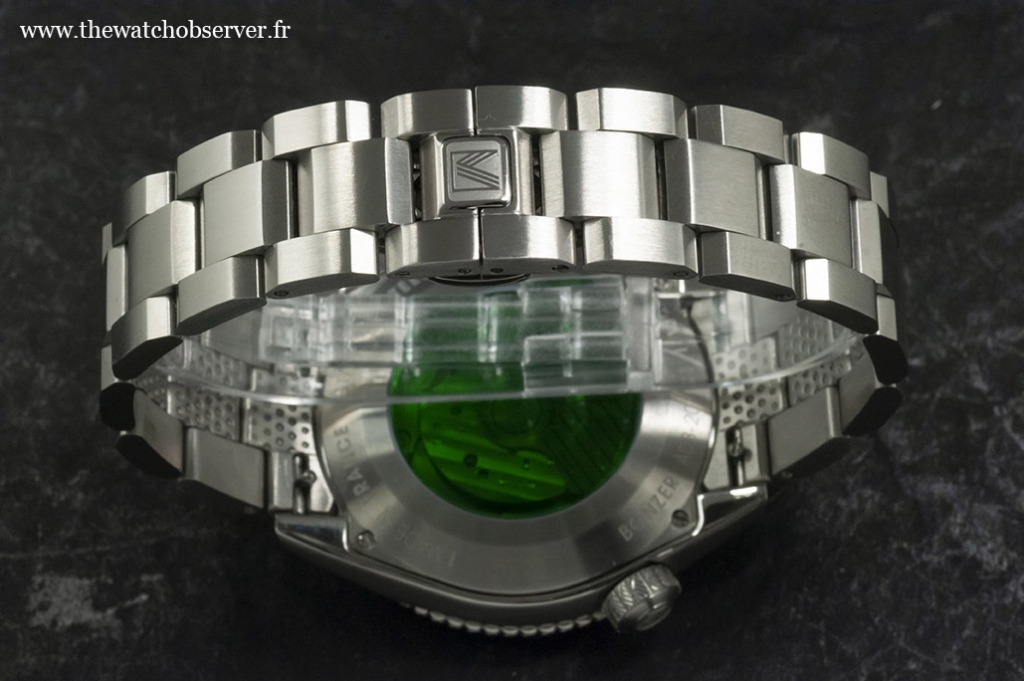 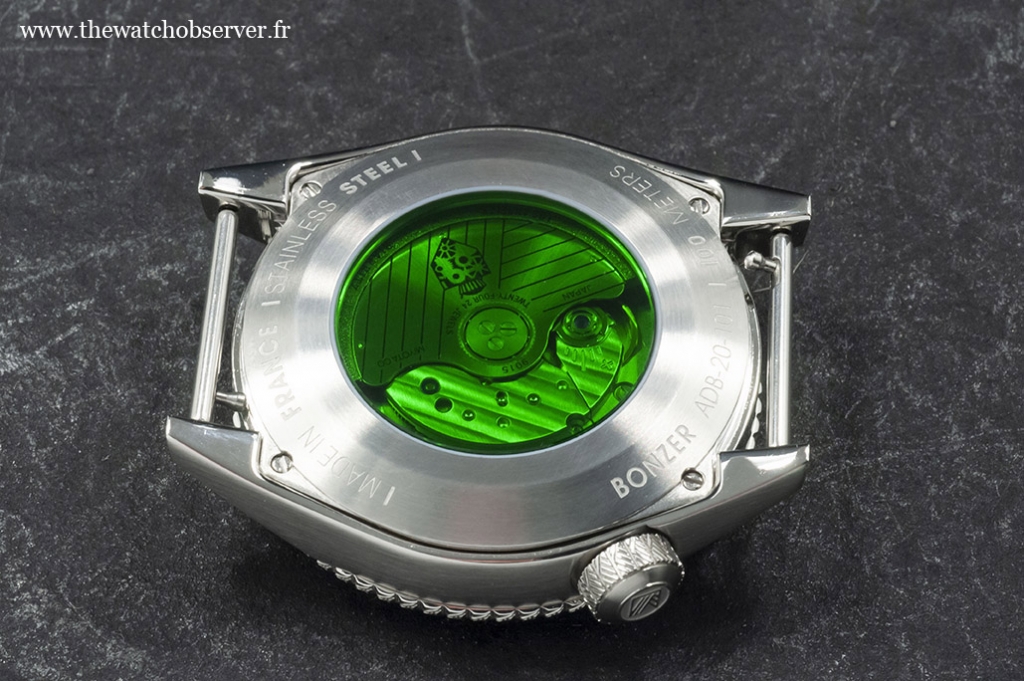 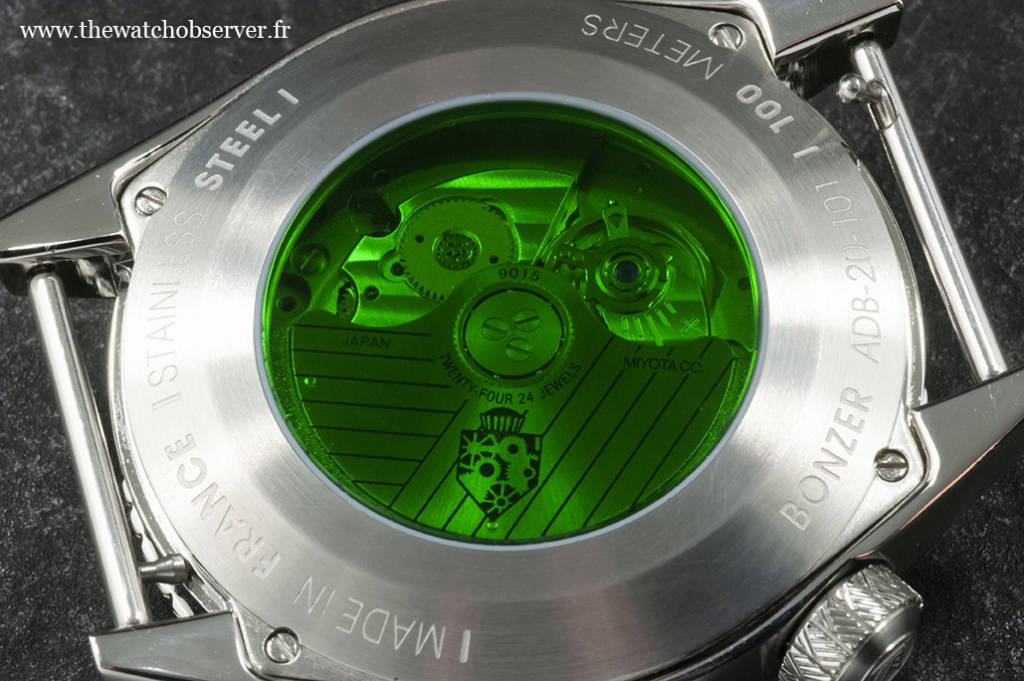 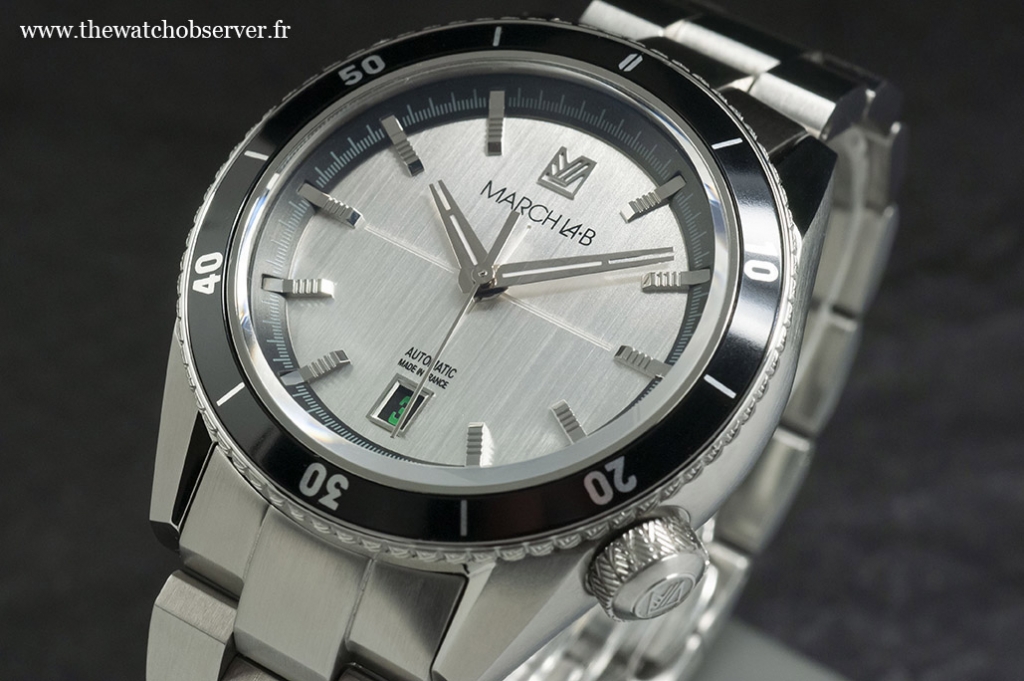 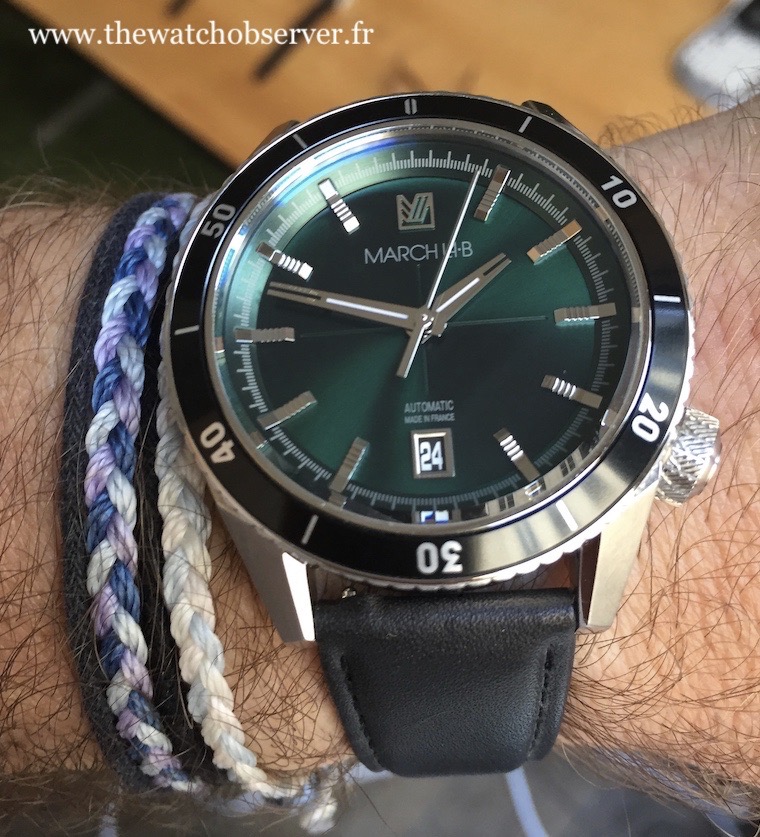 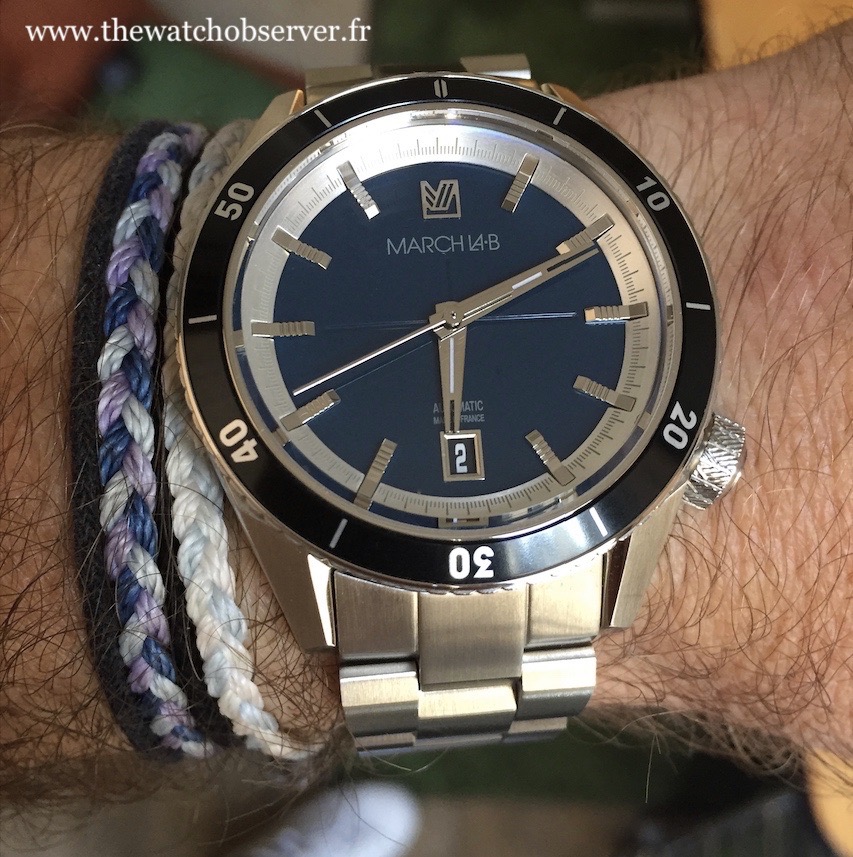 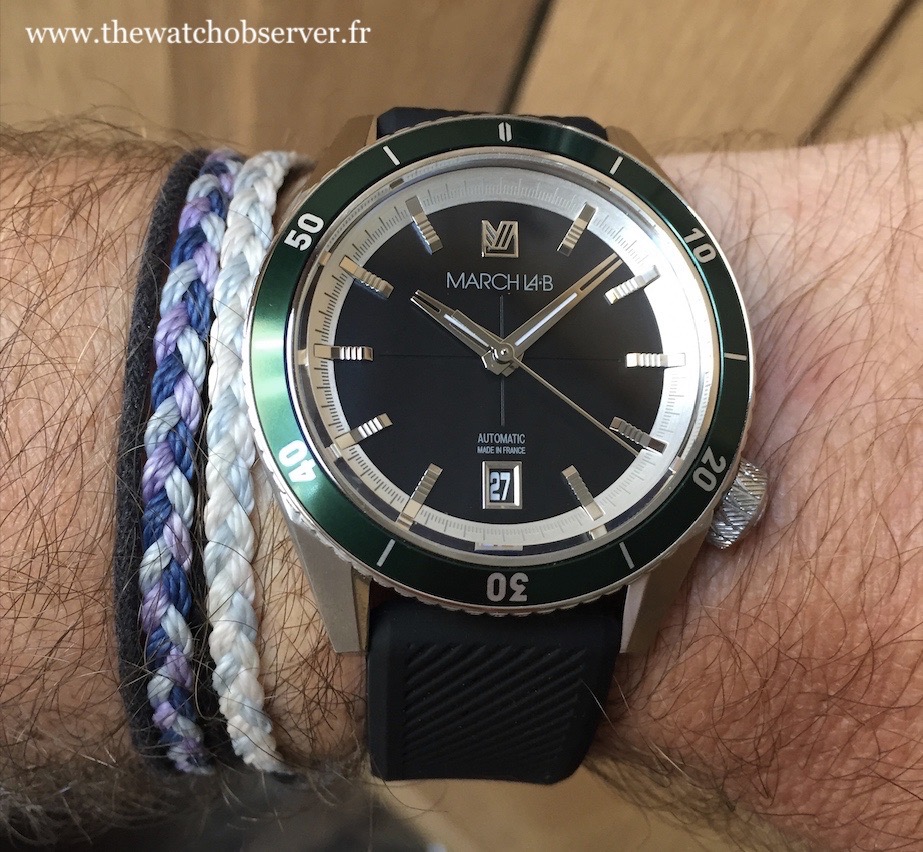 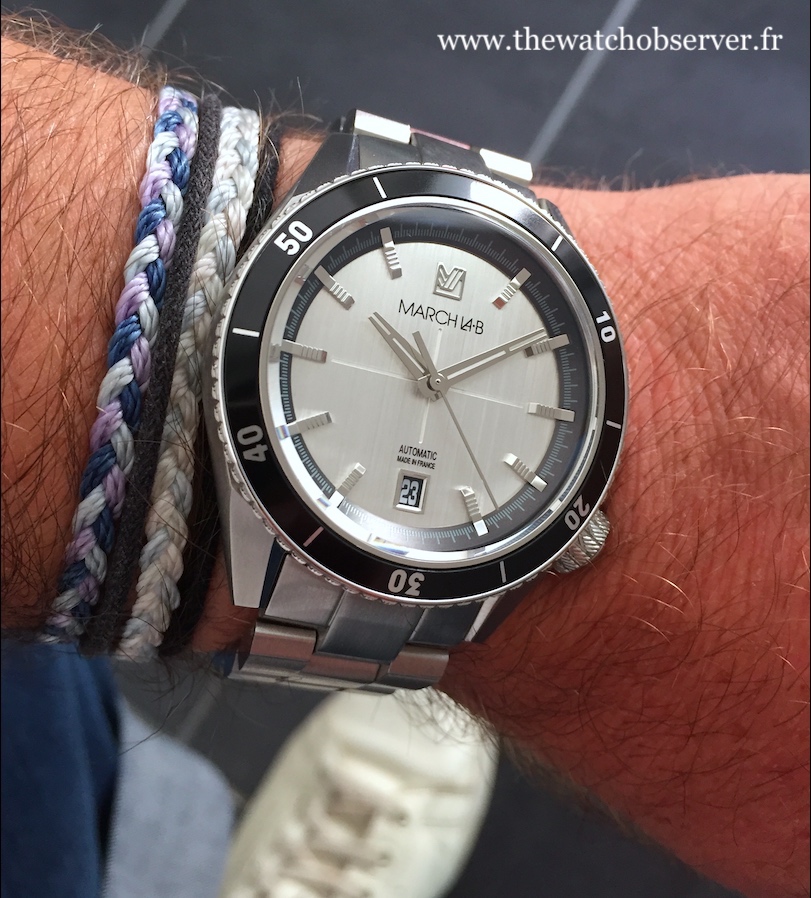 March LA.B’s creativity seems to be unstoppable, with new collections following a yearly rhythm.
I’m not talking about new outfits for existing models, but about new lines in their own right.

Just have a look.

In 2017, the French brand launches the very beautiful Agenda of which it proposes a new version two years later adorned with a new diameter.

In 2018, the watchmaking house that draws its inspiration from two surfing hot spots (Biarritz, France, and Los Angeles, USA) unveils the Belza, a surfer’s watch adorned with the attributes of a diver’s watch.

The year 2019 saw the arrival of the very elegant March LA.B Mansart.

So what does the Made in France brand have in store for 2020?

Well, today she is launching a line called Bonzer, which is composed of four versions, including this Double version.

Where does this name come from, you may ask?

Let me answer you by quoting the press release that March LA.B. sent me: It takes its name from the revolutionary surfboards designed by the Duncan brothers and Malcolm Campbell in the 70s. Faster, more maneuverable and more aggressive boards, easy to surf and suitable for all types of waves.

You’ve got it: this brand new Bonzer is in line with the Belza by complementing the March LA.B surf watches offer but with even more versatility.

First of all, it is presented on a steel case of 41 millimeters in diameter and has a contained thickness of 12.20 millimeters (16mm for the Belza!).

However, you will most likely be as surprised as I was when I put it on my wrist: the Bonzer is
not too small but smaller than its official diameter would suggest.
In other words, it gives the feeling of a diameter that would be 39 or even 40mm.

This impression most probably results from the presence of a unidirectional rotating bezel adorned with a thin black aluminum insert that brings contrast in this monochrome landscape.

The vocation of this bezel is, by the way, more decorative than utilitarian – all the more so because its peripheral notching carved in steel is beautiful and makes it easy to handle.

This impression is also probably due to the presence of thin, short, plunging lugs, which also ensure excellent wearing comfort.

The most observant among you will appreciate as I do, in the register of pleasing details, the inner chamfer of the lugs that March LA.B serves us in a mirror-polished version, the rest of the Bonzer’s case being adorned with a satin finish, which is ideal given the sporty vocation of this new automatic watch.

But to confine the March LA.B Bonzer to its aquatic and sporting vocation would be simplistic.

This novelty Made in France can indeed boast a beautiful elegance.
It is the result of some of the details I just mentioned.

But it owes it above all to its magnificent, refined dial.

On this Bonzer Double, we are offered a silver dial with a particularly balanced minimalist literature. 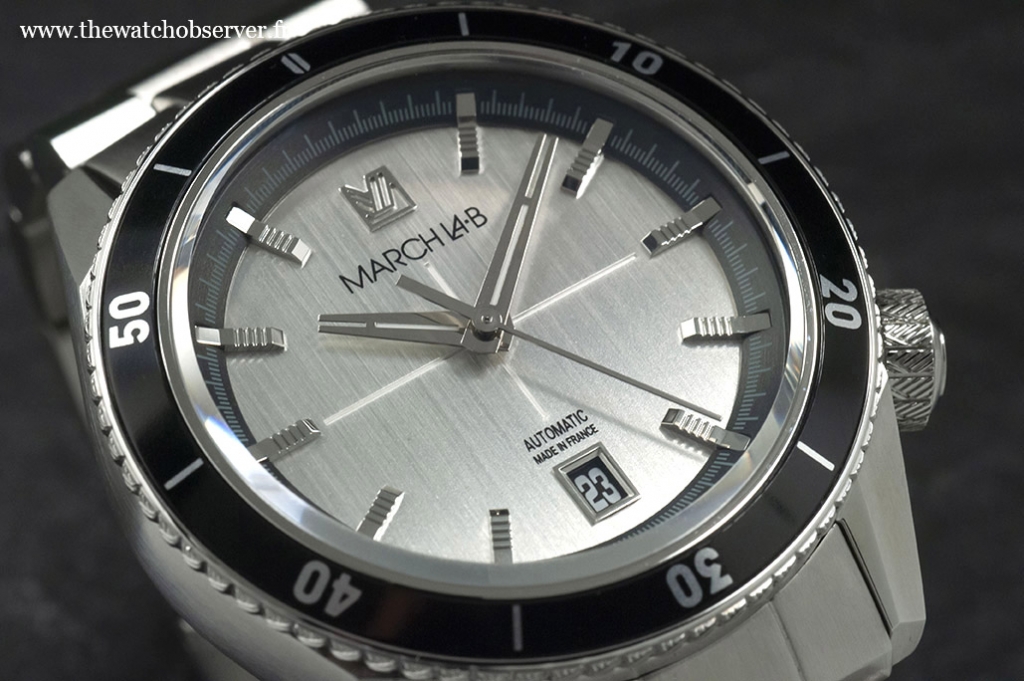 March LA.B adorns it with a vertical brushed treatment and the rhythm of applied notched hour-markers that originate in an anthracite gray inclined flange carrying the minute and second track.

Mirror-polished and rhodium-plated hour-markers and hands offer a beautiful contrast with the dial to allow a perfect reading by capturing the slightest source of light.

The result is absolutely magnificent and so original that it can justify in my opinion alone the acquisition of the model thanks to the seductive personality that emerges from it.

The most observant among you (them again!) will notice the only but discreet touch of color brought by March LA.B to the dial of its Double Bonzer: the graduations of the flange are proposed in a very elegant faded blue-gray.

This is not actually the only touch of color offered by the dial of this watch.

Indeed, on the 3rd of each month (and only on this day), the date turns green – an identifying feature of March LA.B watches, whose date disc systematically carries this pleasant particularity.

Finally, and here we find another component of the French brand’s DNA, the back of the Bonzer’s case is equipped with a green-tinted glass revealing the Miyota 9015 caliber that animates it, its oscillating weight being stamped with the unmistakable blackened March LA.B. coat of arms.

The March LA.B Bonzer is also adorned, for optimized wrist comfort, with a winding crown placed at 4 o’clock and sculpted in steel with the same beautiful brand identity motif found on the bezel.
This screw-down crown allows it to be water-resistant to 100 meters, its pattern allowing an ideal grip for adjustments.

But as usual, the brand offers two other options: silicone strap or leather strap.
Equipped with flash spring bars, it will be easy for you to switch from one to the other without tools to dress the Bonzer according to your mood and/or your schedule.
The NATO bracelet also fits it rather well as you can see in my photo series.

March LA.B keeps on surprising and seducing me.

While remaining faithful to its DNA, the French brand multiplies its creations with talent.

This brand new Bonzer is a perfect illustration of this.

Its versatility is first of all absolute thanks to a clever mix of sportiness and elegance.
You can wear it during your next surfing session in Bali as well as wear it at the office on more formal outfits.

The quality of its realization and the care given to details are once again pleasing, its magnificent dial being a delight at all times with its changing shades according to the luminosity and the inclination of the watch.

The result is a very March LA.B. watch, but one that does not resemble the previous models in its catalog – in short, a unique and very seductive personality.

Sold at the price of USD 1,675 on a steel bracelet, the Bonzer Double finally displays an excellent quality/price ratio.

In addition to its network of official retailers, March LA.B has three of its own stores, including 2 in Paris: