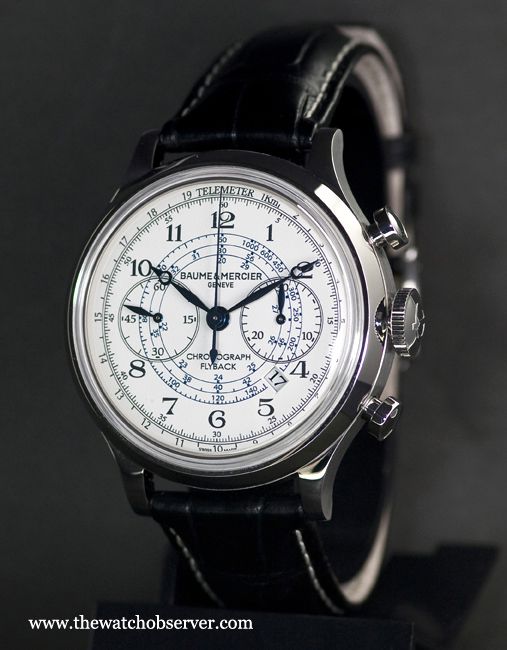 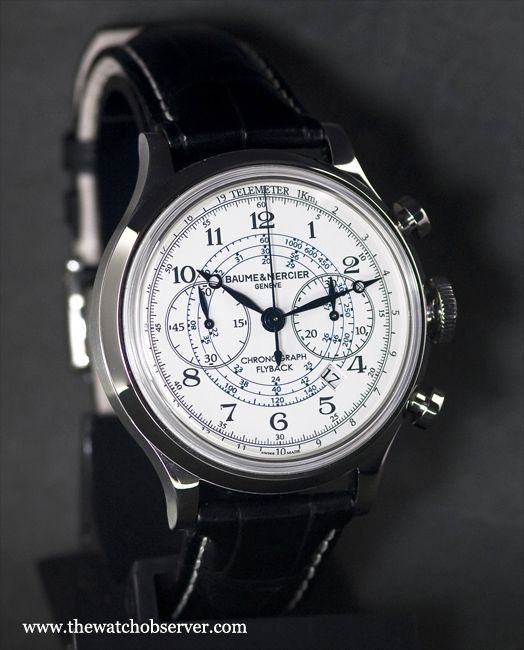 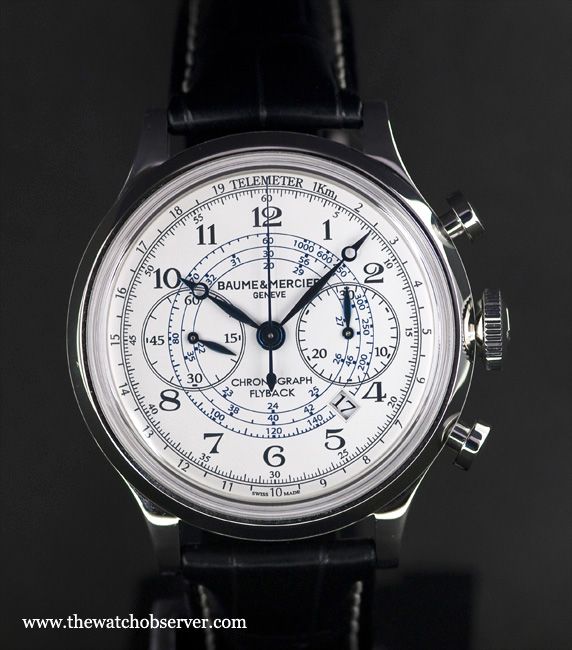 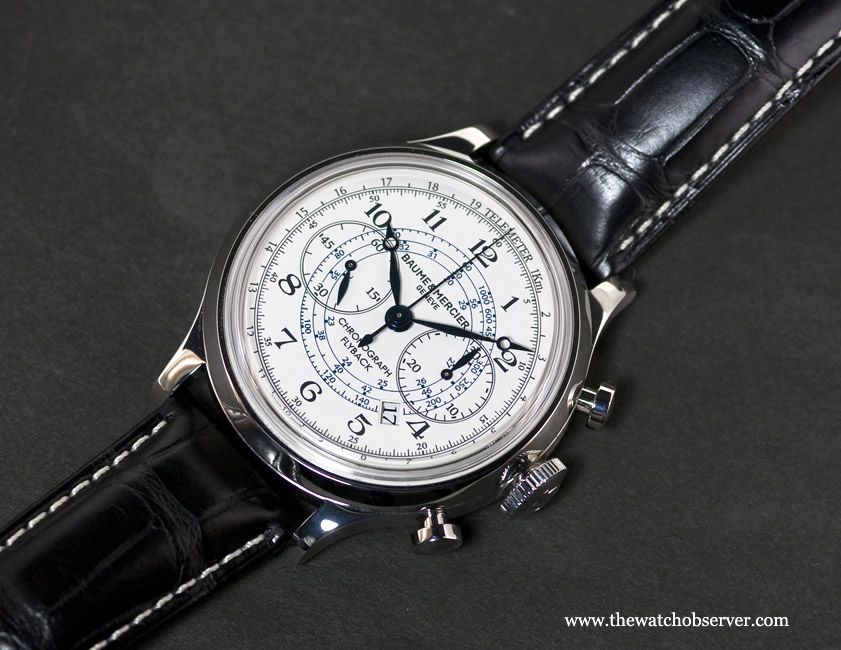 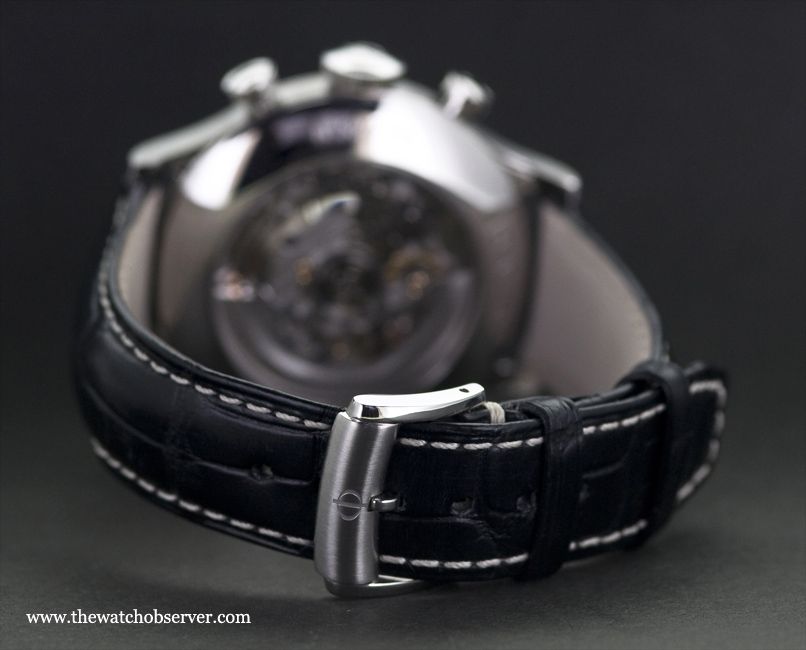 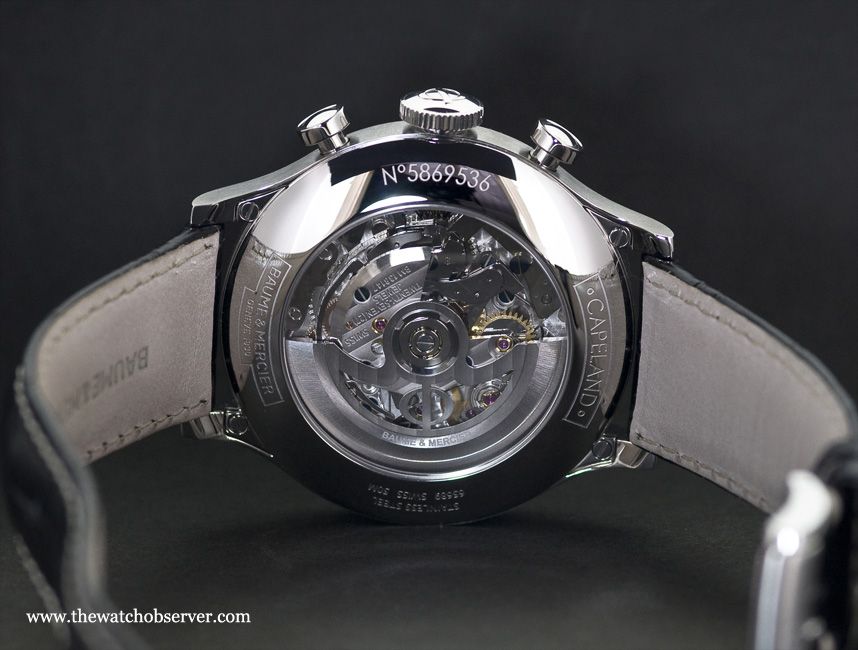 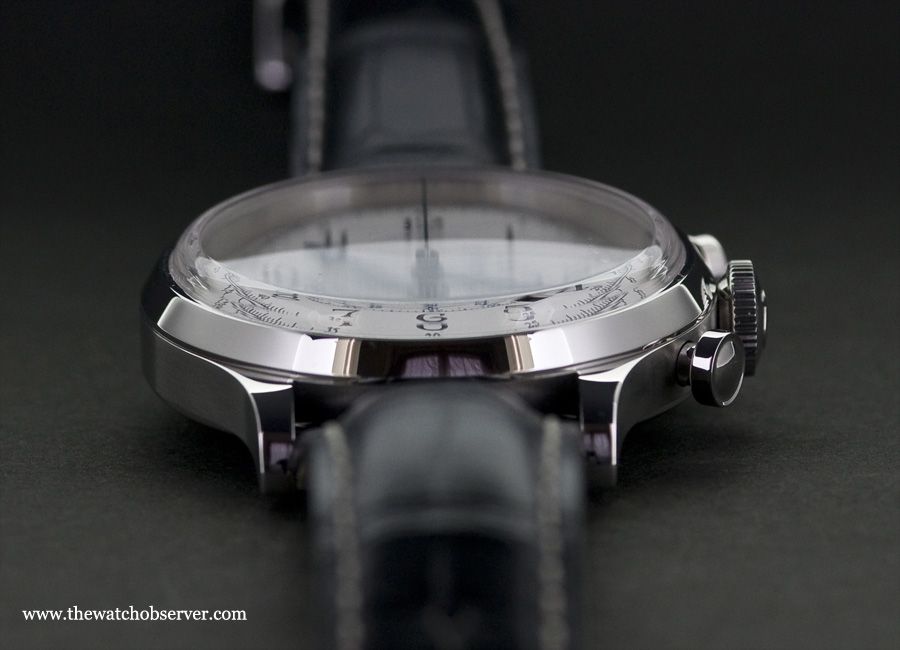 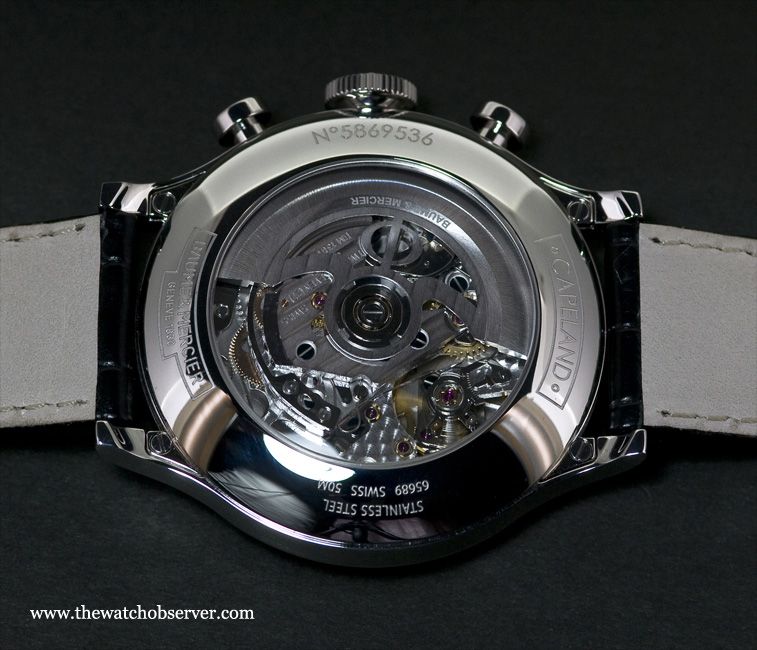 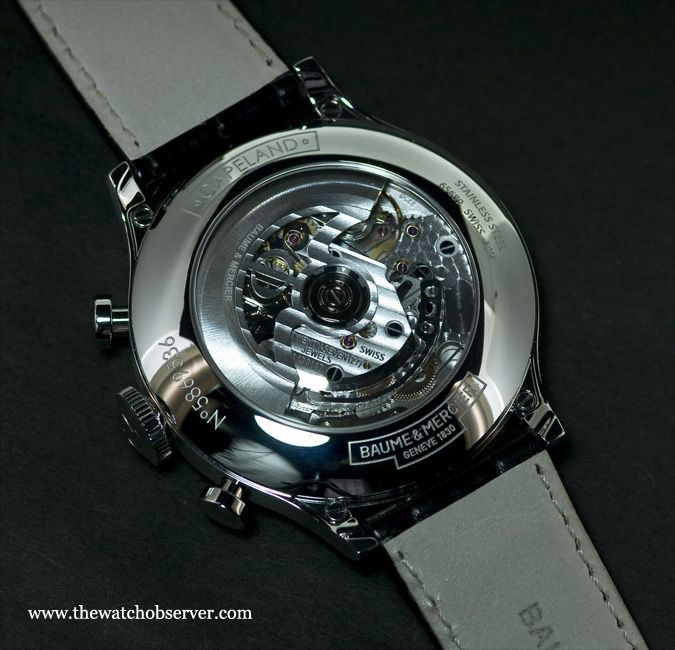 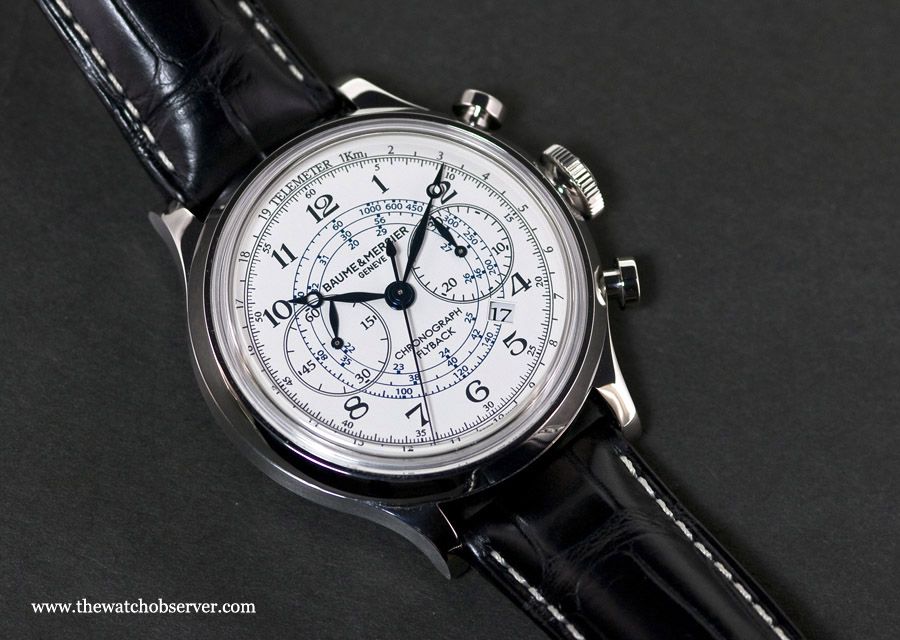 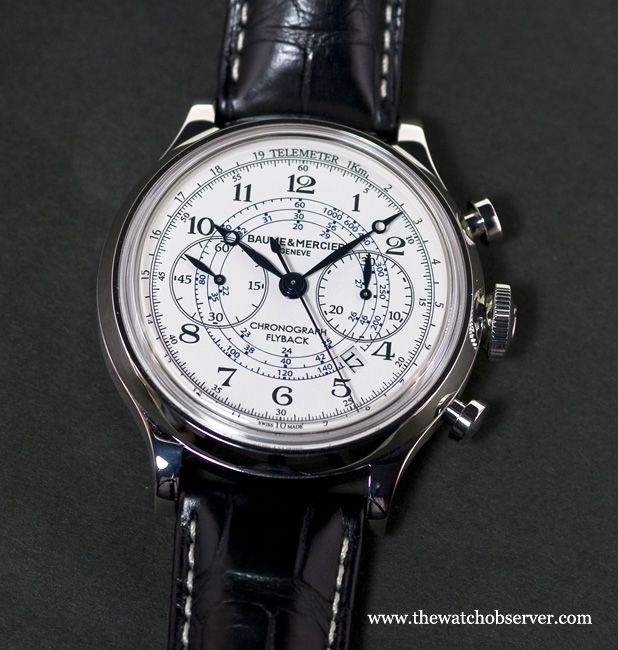 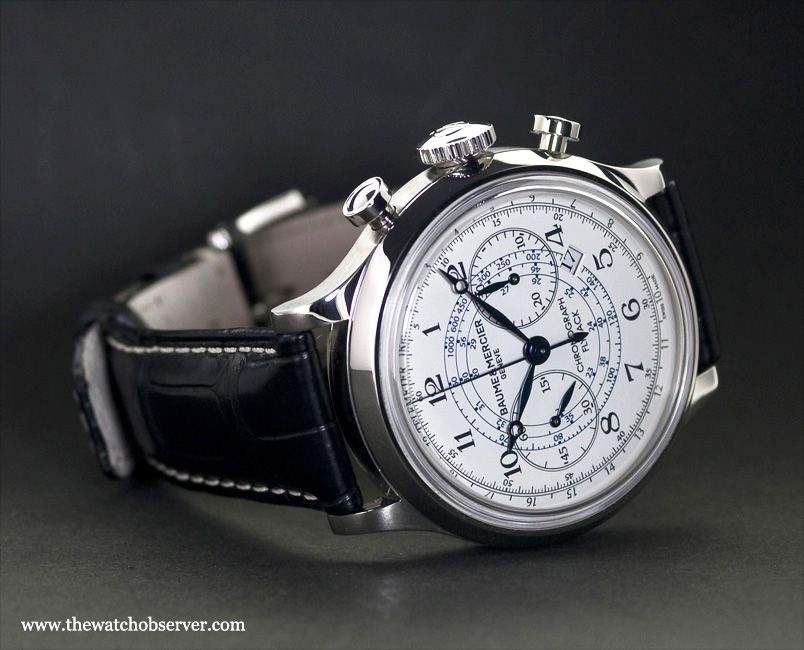 Following the example of most brands in these last few months, Baume & Mercier has decided to return to watchmaking basics.

To this end, the company developed its emblematic models and adorned them with the Greek letter Phi, symbol of balance.
The new chronograph Capeland line of watches, which greatly differentiates itself from the previous generation, offers many features that are likely to appeal to the enlightened connoisseur.

Right away with the first glance, the dial catches the eye with its slightly convex shape, its ivory color and the choice of typographic characters used for the design of the hourmarkers.

But foremost, it is the inscriptions on the dial that will undoubtedly get your attention.

What is this strange blue spiral that sits in the center, superimposed on the timer for the seconds and the chronograph’s minutes counter?
It is a tachometric scale inspired by the style of the 1930’s.
With this Capeland watch, you will have the ability to calculate a horse’s velocity, starting at 20 km/hr, and not just the speed of a car on a track, or an airborne plane!

The decision to use a scale made up of three concentric circles allows for an easy reading.

Start the chronograph when passing a mile marker, then stop it when you get to the next one.
The chronograph’s long blued hand will then indicate the speed at which you are traveling.

If the hand has traveled less than a full revolution, you will get your velocity from looking at the largest of the three circles. You are therefore moving “fast” since your speed fluctuates between 60 and 1,000 km/hr.

If the hand is in its second revolution, you will calculate your speed using the middle circle.
Your velocity will in this case fluctuate between 30 and 60 km/hr.

Finally, if the hand is in its third revolution, the markers on the dial’s inside circle will tell you the speed at which you are moving (between 20 and 30 km/hr).

A balanced and consistent chronograph dial

On the dial’s circumference, another scale, this one telemetric, displays the distance at which a sound happens: very useful during storms, this function has unfortunately also been extensively used by artillery units during both world wars.

Most exquisite, the blued steel hands, Breguet-style (the leaf design was used for the counters’ hands), are esthetically as well as historically consistent with the tachometer of this self-winding watch.

The countdown for the chronograph’s times is itself done using graduation located on the inside of the telemetric scale.
This simple solution prevents the accumulation of numerous counters and thus helps preserve a nice balance within this bicompax dial.

There is, unfortunately, one flaw, with the date window situated between the 4th and 5th hourmarkers.
The collectors will indeed likely lament the fact that Baume & Mercier sacrificed the historical consistency of this model for the sake of functionality and modernity with the addition of this window…

An automatic chronograph case with curves

Looking at it from the side, the case is reminiscent of the historical inspirations behind this Capeland.
It has a “potbelly”, like the one many pocket watches had back in the old days.

The cambered back is a harmonious response to the bulge from the bezel and the glass, while the brushed flanks offer a nice contrast to the polished surfaces and traditional push-buttons.
The cambered silhouette, typical of the 1930’s style, can also be found in the large crown stamped with the Baume & Mercier logo – in fact quite pleasing to handle. 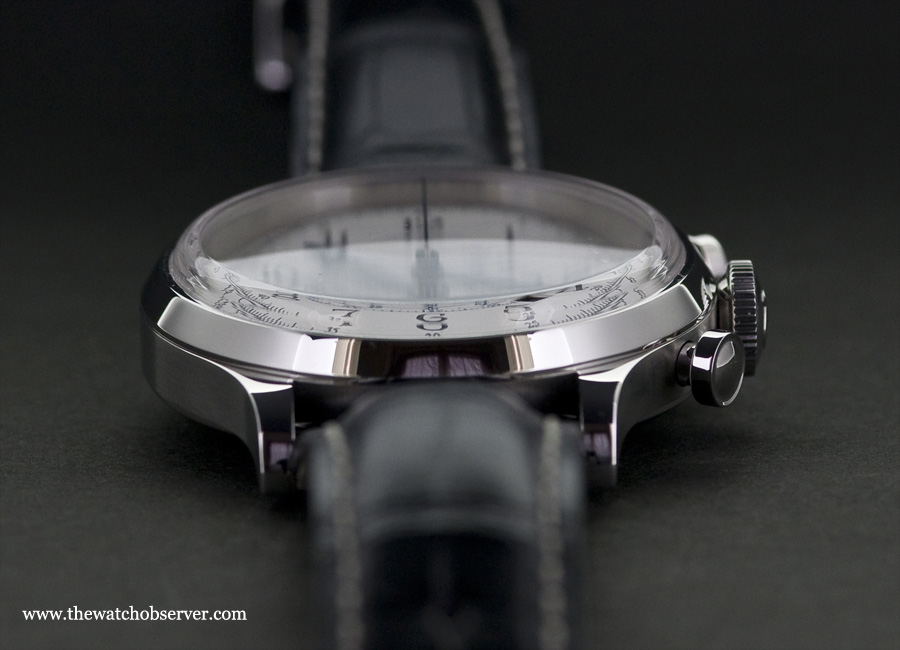 As a result of this style of manufacture and the size of the case, the tips of the lugs end up being higher than the bottom of the watch.

The Capeland chronograph requires this kind of surface area in order to be comfortable on the wrist.

As far as the alligator bracelet, it must be tightly fastened using its pin buckle in order for it to be correctly positioned on the wrist.

Thus, this Baume & Mercier will not be a good fit for people with small wrists and you will not be able to wear it with your shirt sleeves buttoned.

Going beyond the esthetic charm that exudes from this watch, this Capeland’s other great appeal is its flyback function.

When the chronograph is set off, pressing the bottom push-button (the same one used to reset it to zero once it is stopped) in the same movement will stop the hand in its track, reset it to zero, and will automatically restart the chronograph.
This complication provides great visual pleasure (see the video) despite not being very useful on a daily basis.

The automatic caliber that makes this possible is an excellent La Joux-Perret 8147-2.
You can see it at work behind the transparent sapphire case-back while the oscillating weight in the shape of the Greek letter Phi rotates. It is decorated with some Côtes de Genève along with a sunray finish.
Lastly, the bridges and platinum are all pearled with some of the screws are blued.

To see the flyback function and the chronograph in action (see HERE if you are unable to view the video below):

This travel back into time that Baume & Mercier offers us with this new Chronograph Capeland Flyback is virtually flawless.

It has all the qualities – and a few mistakes – that make the watches of that era so charming.
This watch will seduce the connoisseur looking for a piece with an old-fashion design but equipped with all the beneficial qualities and reliability that modern watchmaking offers us.