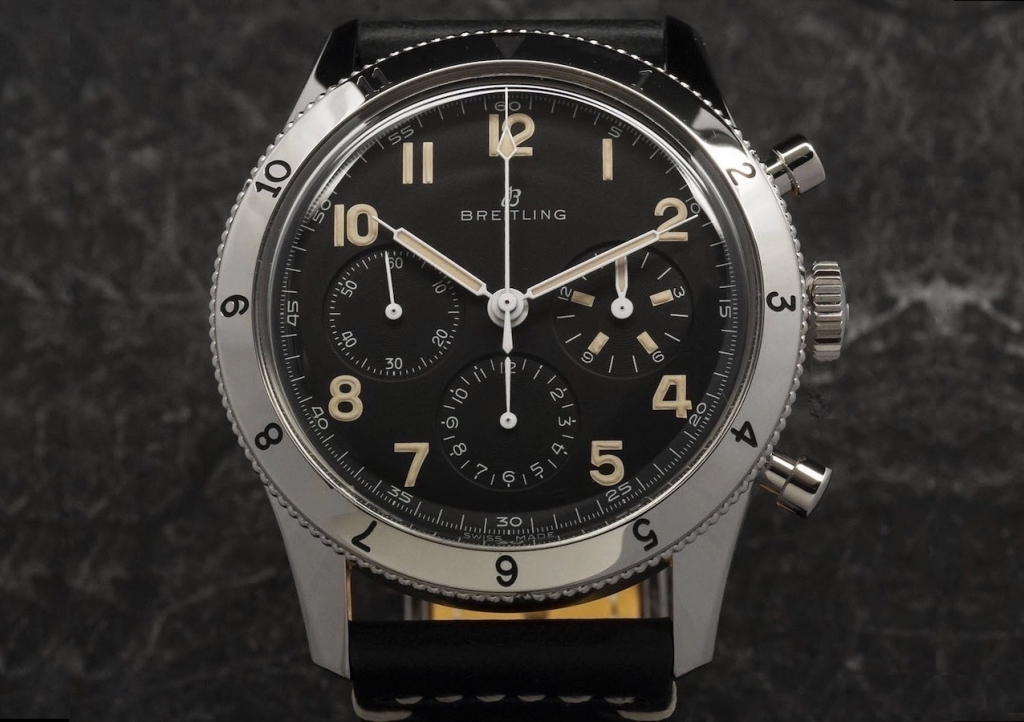 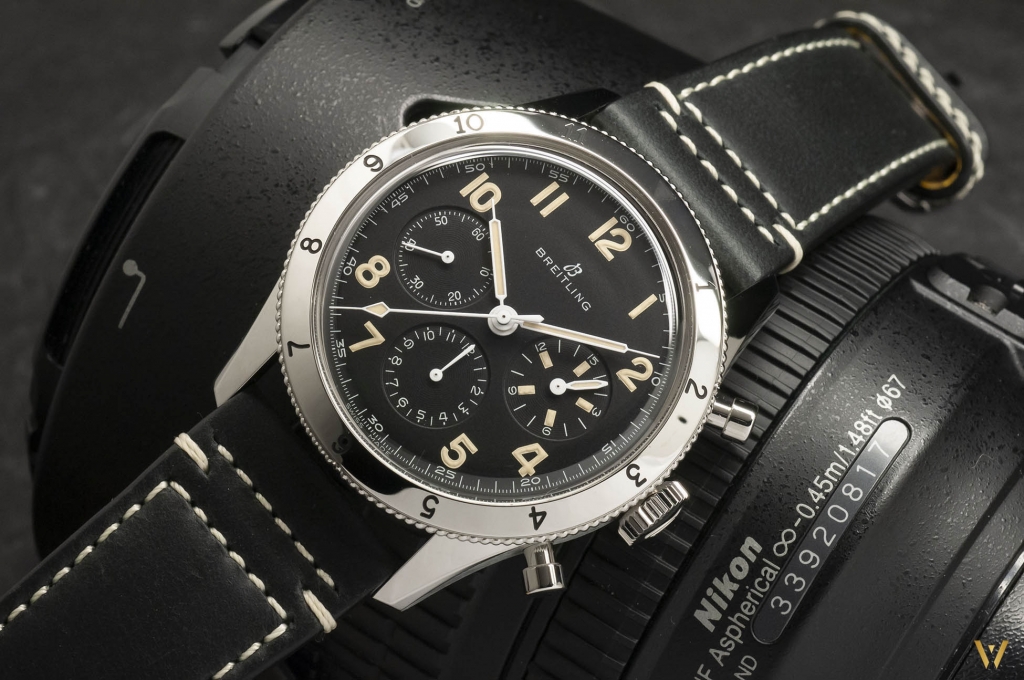 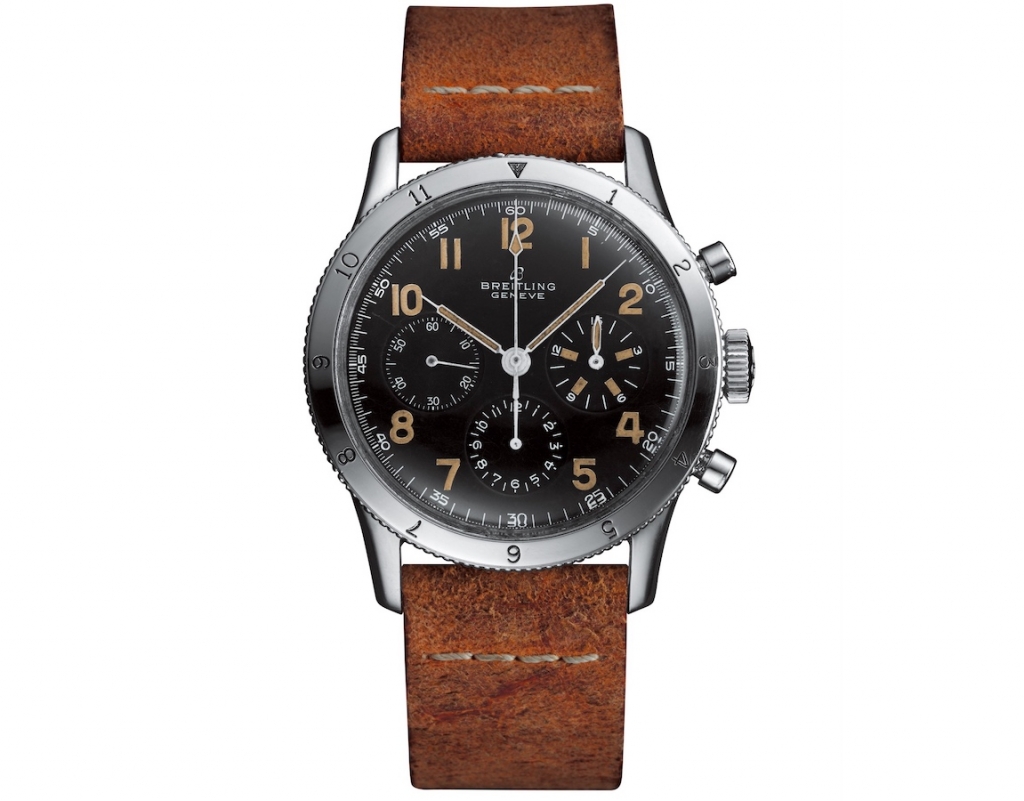 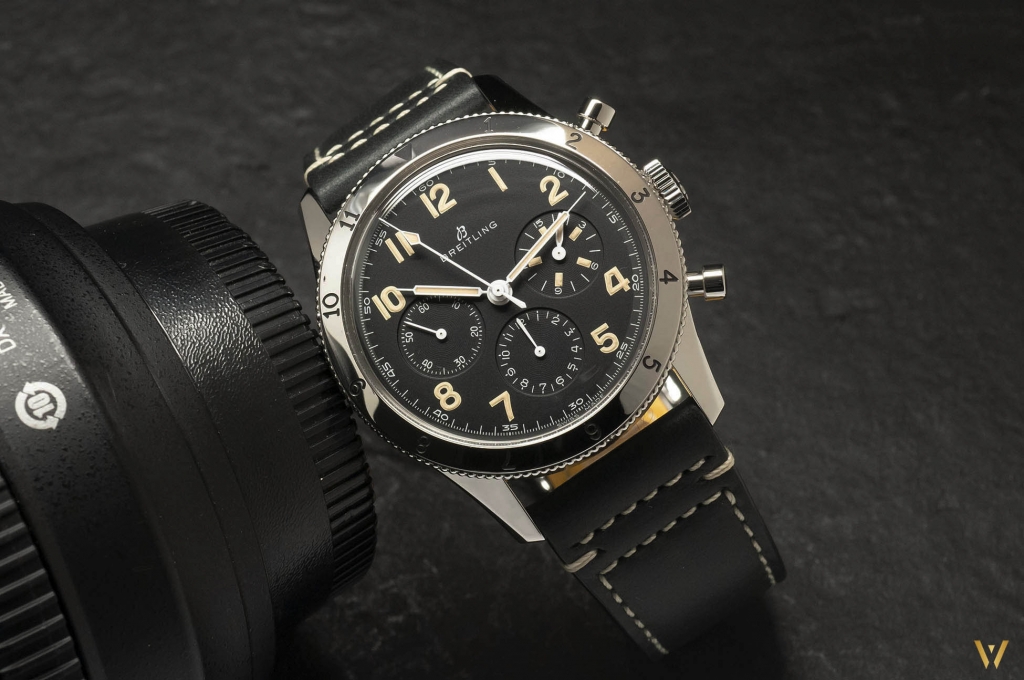 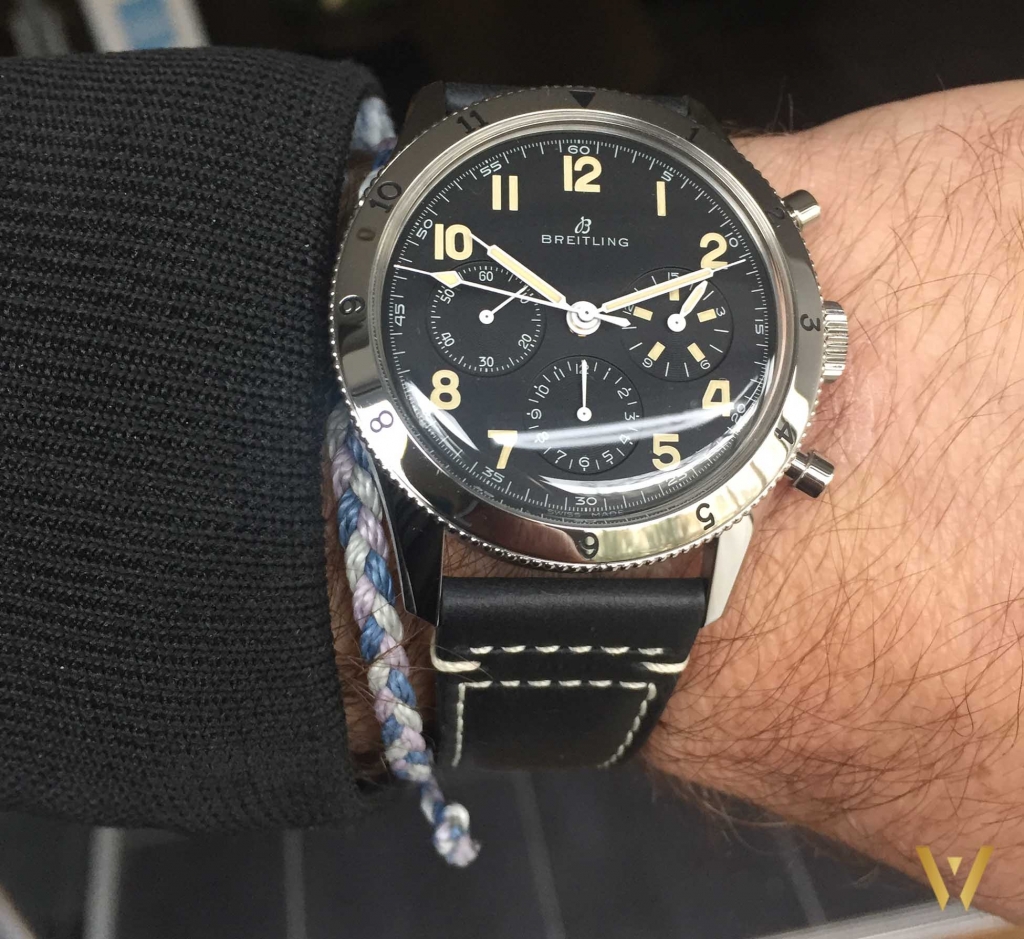 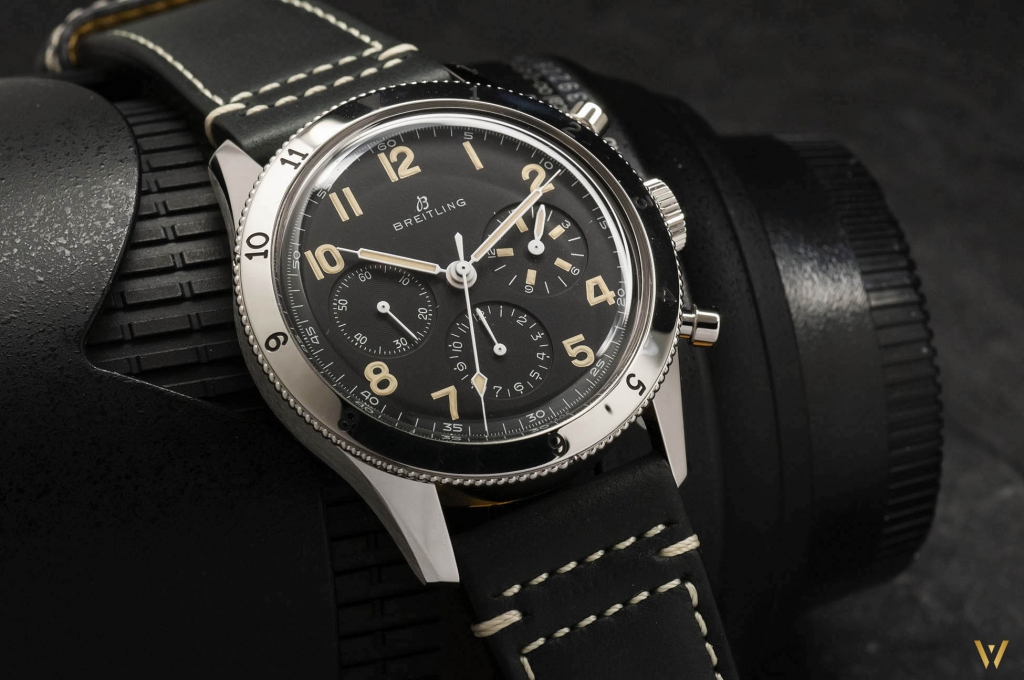 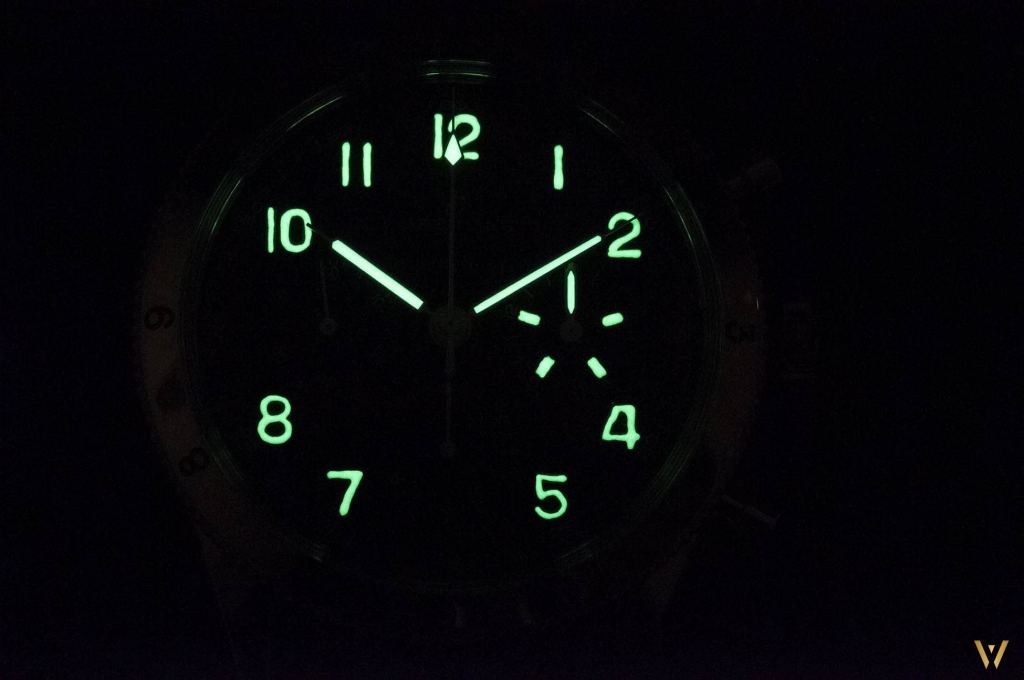 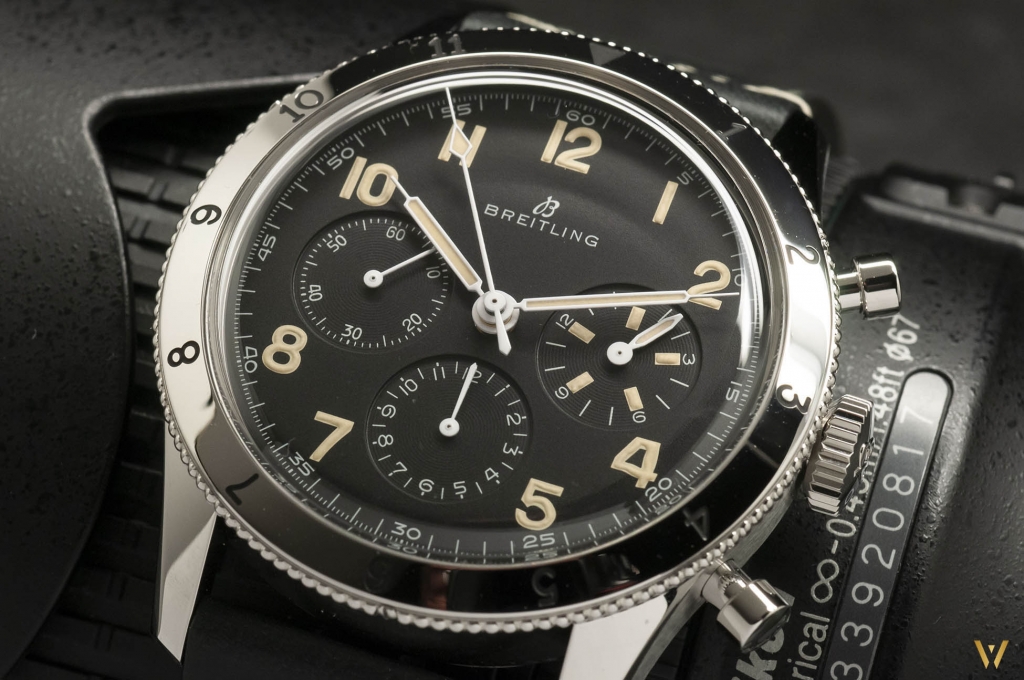 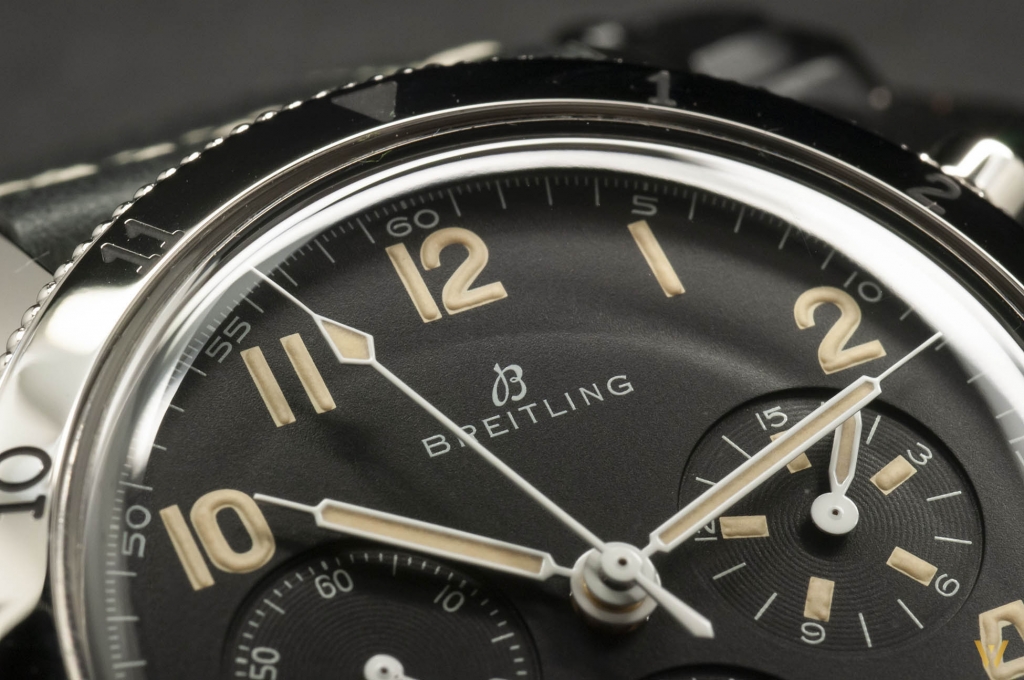 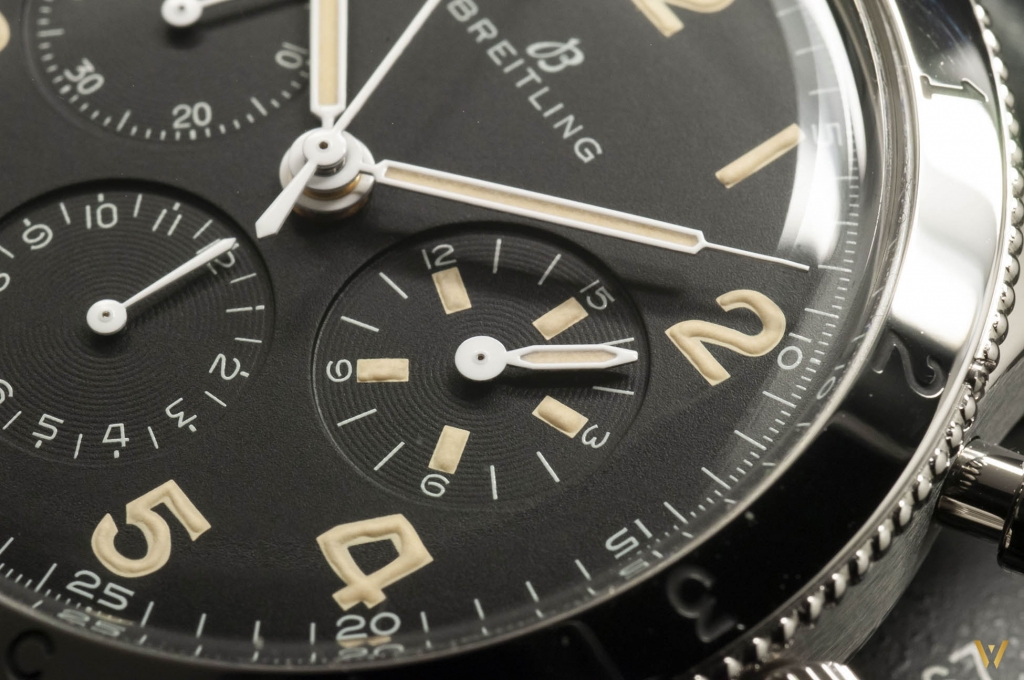 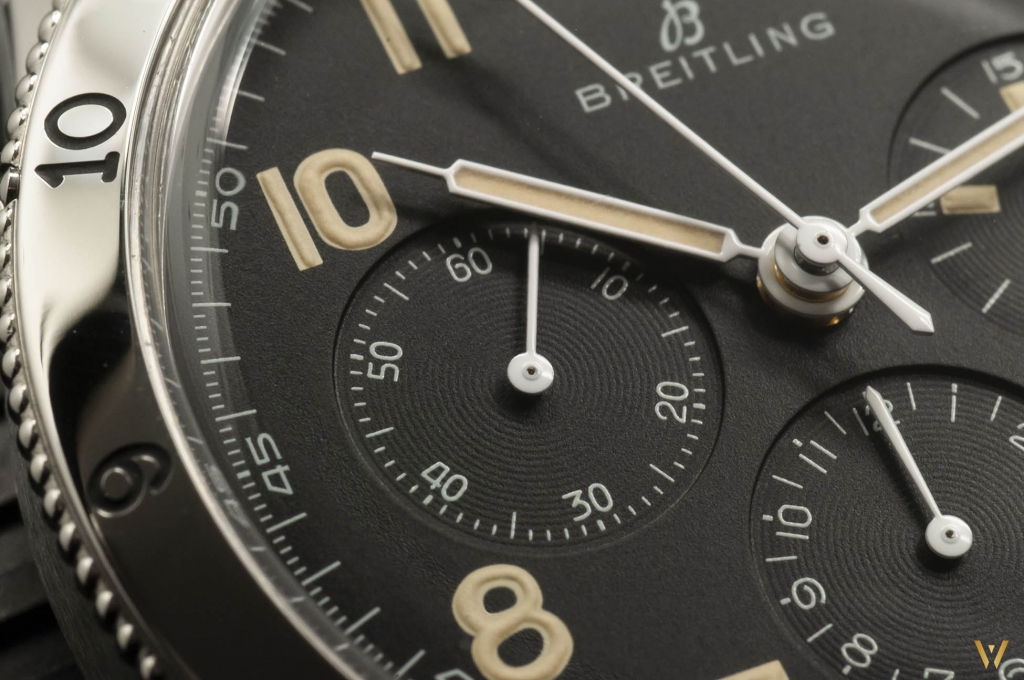 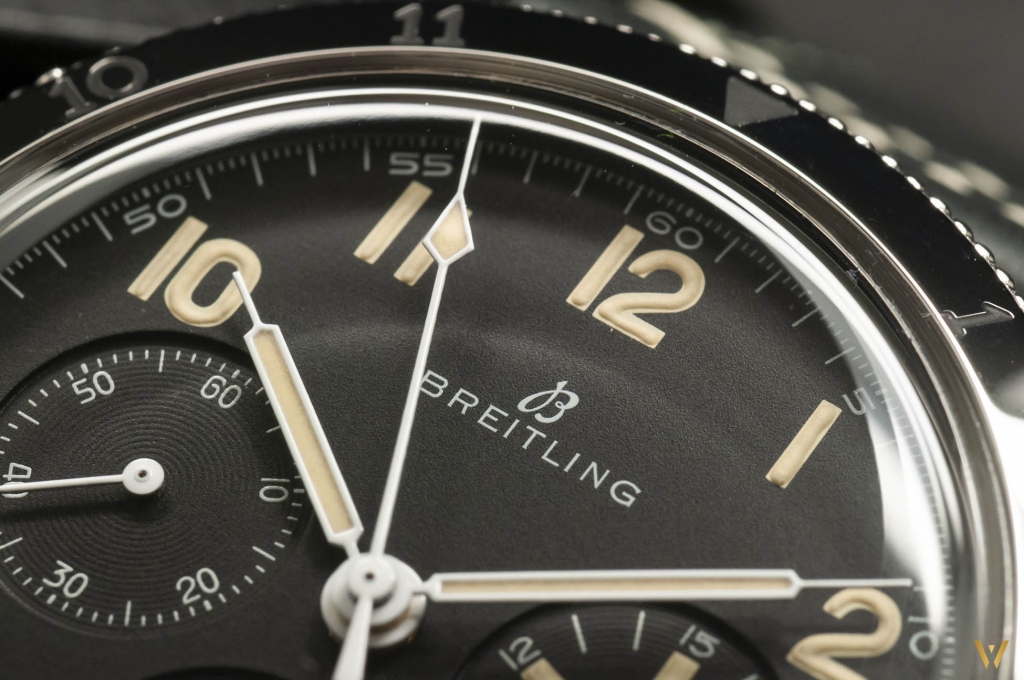 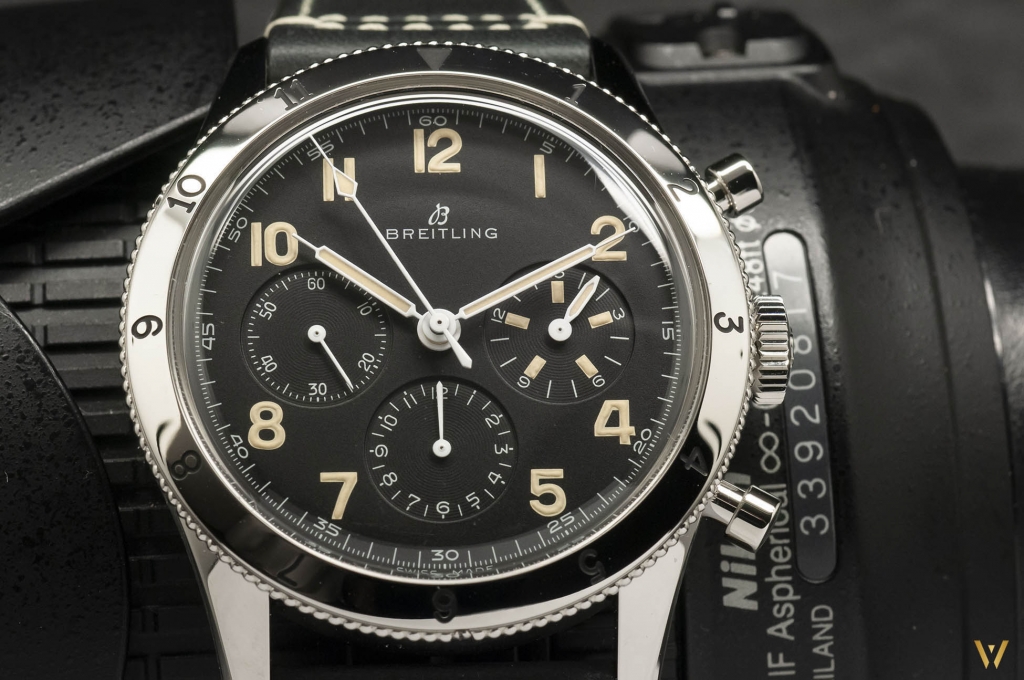 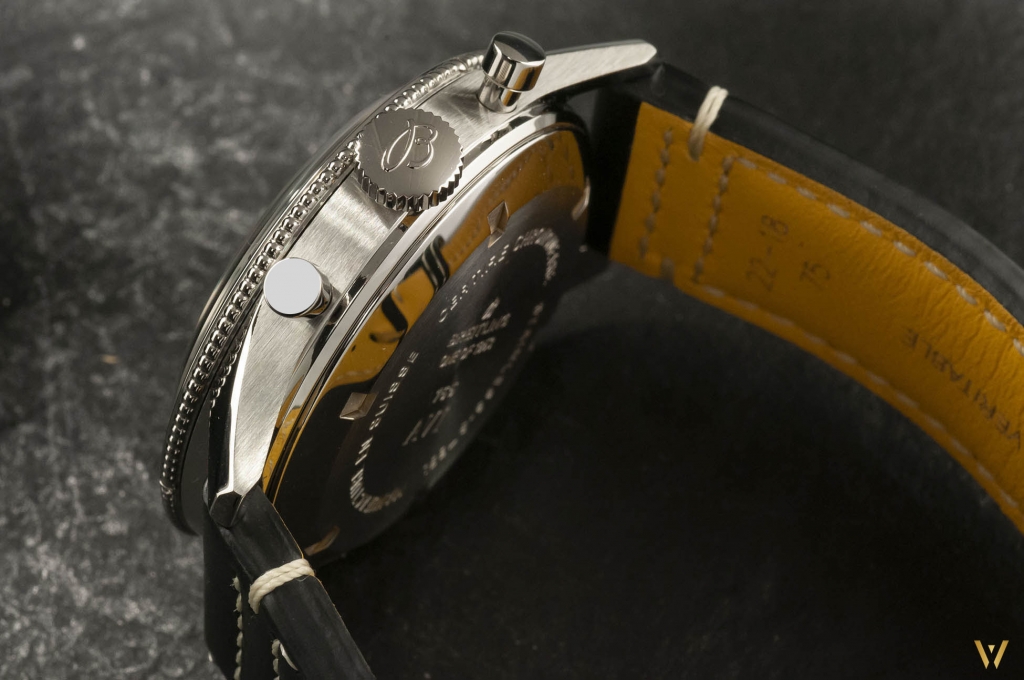 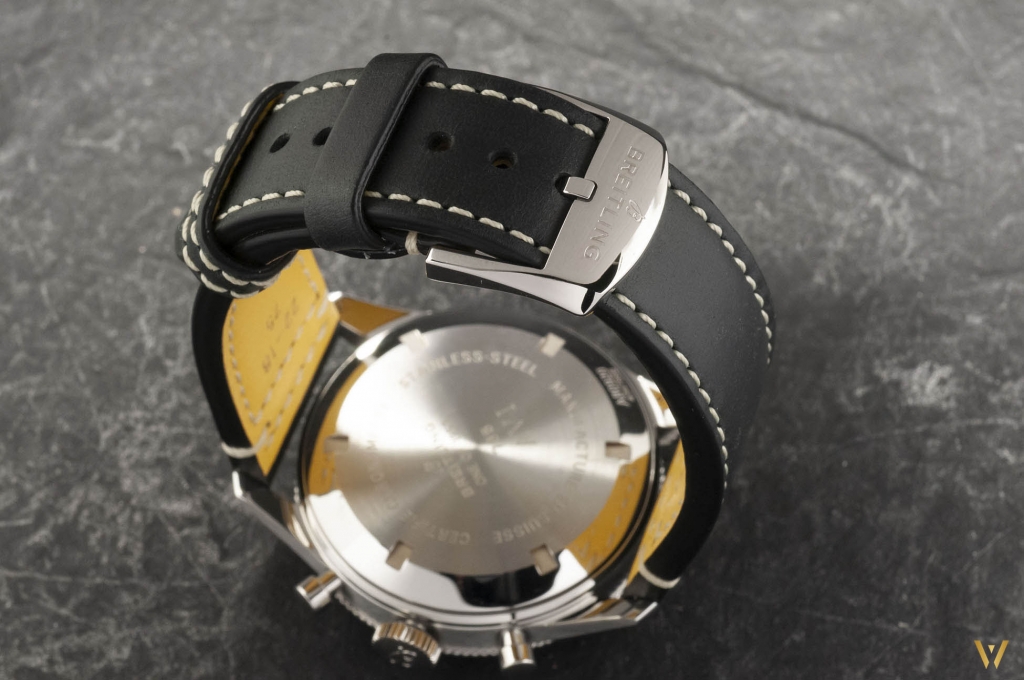 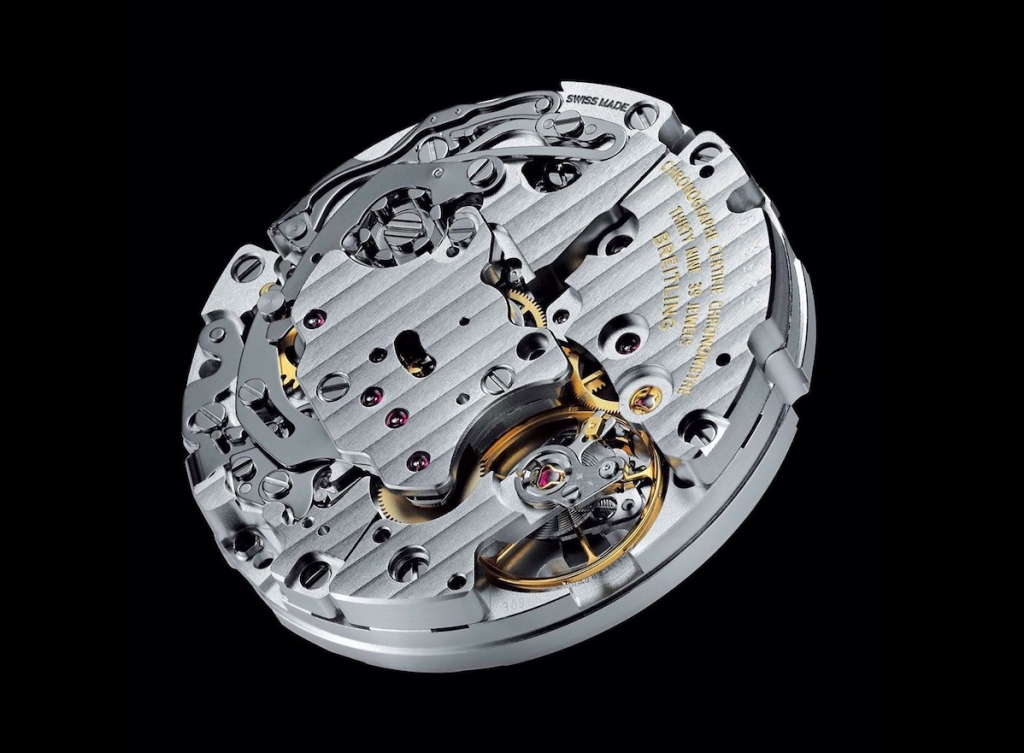 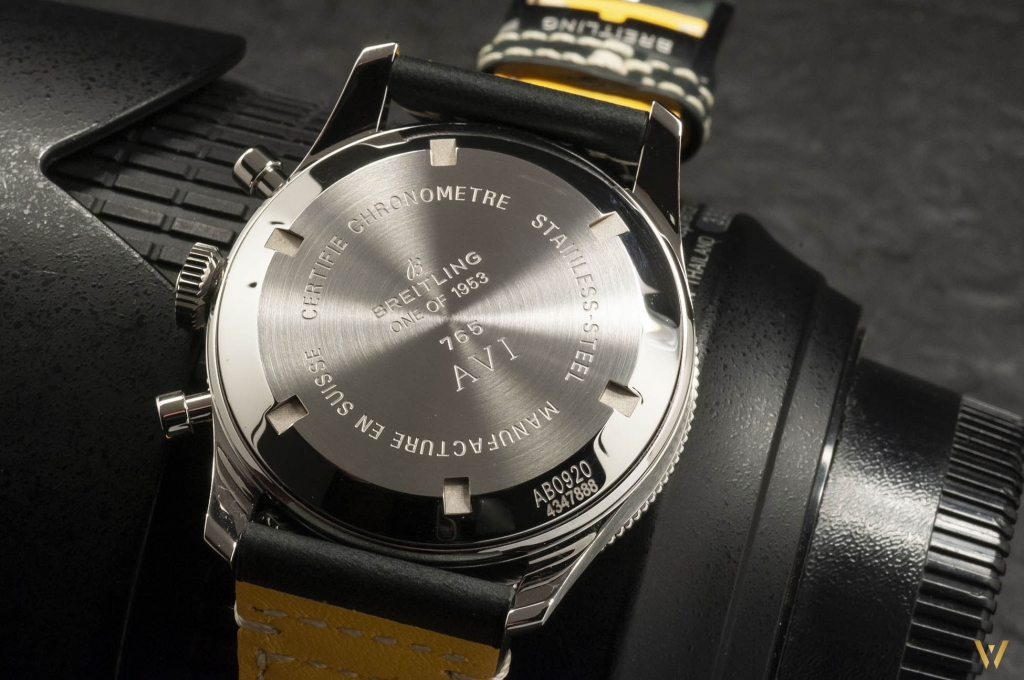 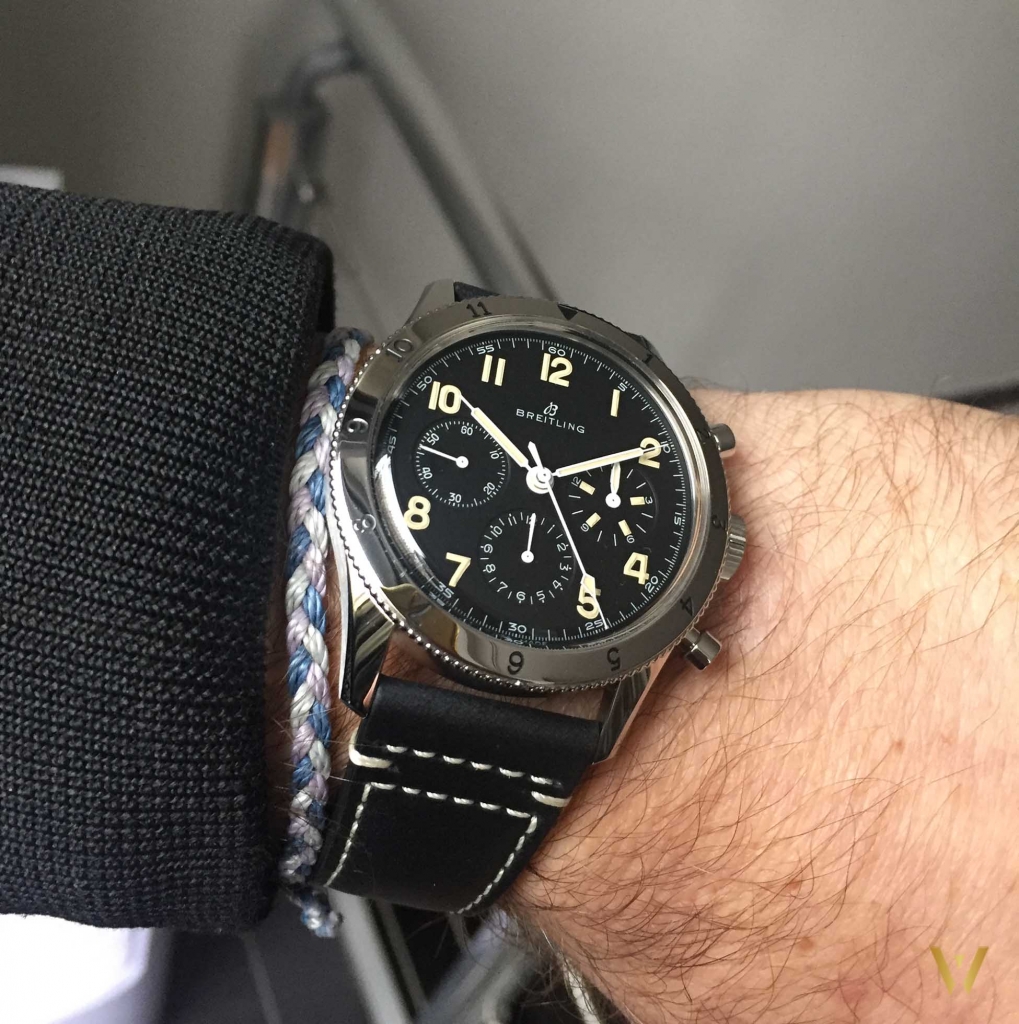 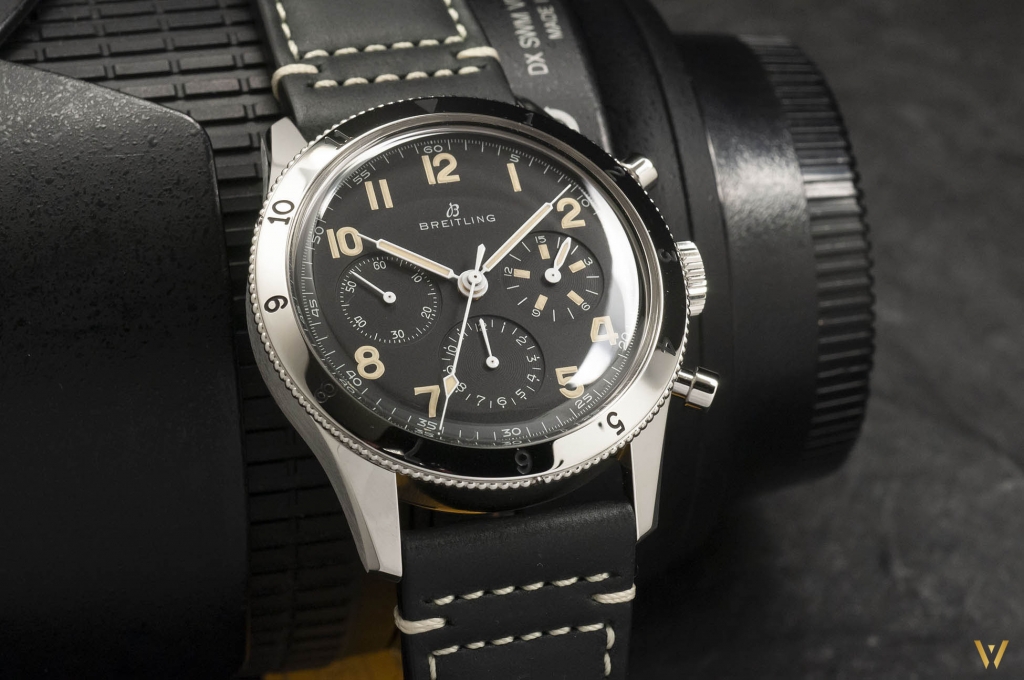 It is not uncommon, far from it, that a single collection manages to overshadow the others within a brand’s catalog.

Aside from Rolex, several lines of which attract covetous buyers and Omega and its two solid pillars, the Speedmaster and the Seamaster, I think in particular of Jaeger-LeCoultre and its Reverso, Audemars Piguet and its Royal Oak, and Patek Philippe and its Nautilus.

This is also the case at Breitling, whose rich offering seems to be overshadowed by the iconic Navitimer chronograph.

Fortunately, The Watch Observer observes from time to time, and while strolling around the Breitling site, I came across a model that I am talking about today: the AVI Ref. 765 1953 Re-Edition – a sumptuous chronograph of which few live photos circulate on the Net, the majority of the media having been content to take the press release and official photos.

As its name explicitly indicates, it is an pilot’s watch inspired by the past.
And to understand its essence, you should briefly immerse yourself in it – in the past, for those who don’t follow!

At the beginning of the 1950s, the French Ministry of Defense launched a call for tender, with specifications to support it, to equip its pilots with a watch.
While many watchmaking companies responded to this invitation to tender, only four signed a valuable purchase order with the French government: Breguet, Auricoste, Dodane and Vixa. Thus, the Type 20 was born.

Breitling was one of the unsuccessful bidders, the watchmaker having proposed the reference 765 Co-Pilot launched in 1953 – a contract that the Swiss brand did not win, no doubt due in particular to the absence of a flyback function on its chronograph.

Aesthetically very close to a Type 20, the Breitling AVI Ref. 765 1953 Re-Edition is the very desirable, almost conforming re-edition of its ancestor.

In 2019, Breitling unveiled a first reissue at Baselworld: the Navitimer 806 1959 Re-Edition – reissue of the 1959 ref. 806 launched for the 60th anniversary of the Navitimer.
Fortified by its enormous success, the manufacturer is offering this AVI Ref. 765 1953 Re-Edition following the same recipe – that of historical fidelity.

The Breitling AVI Ref. 765 1953 Re-Edition was designed in particular to offer its owner optimal legibility in 1953, and takes up its characteristics.

Starting with its case.
In its contemporary version, it has the same diameter as the original model – 41 millimeters.
Breitling goes so far as to respect the original lug width of 22 millimeters.
Imposing for the time, this diameter is today quite standard, not to say contained when it comes to pilot’s watches, to the point of being able to dress (almost) every wrist.

Like the bi-directional rotating bezel, which is perfectly in line with the original model, the case of the Breitling AVI Ref. 765 1953 Re-Edition has an entirely mirror-polished finish, with only the middle of the case displaying a fine horizontal satin finish (vertical at the lugs).

The very beautiful realization is finally highlighted on the lugs side by a pretty chamfer that gradually widens as you go down along the lugs.

On the back, Breitling offers a circular satin-finished solid back engraved with the model number, this AVI Ref. 765 1953 Re-Edition being a limited edition of 1,953 copies.

In terms of thickness, the AVI Ref. 765 1953 Re-Edition displays 14.61 millimeters – a thickness that is certainly different from that of the historical model because of the caliber that animated it in 1953: a Venus 178.

This is where one of the rare deviations Breitling has allowed itself to make in this re-edition lies, since the contemporary version is powered by a contemporary movement – in this case the Breitling B09 caliber.

However, the spirit is preserved, since both are hand-wound mechanical chronograph movements and are equipped with a column-wheel.

The Breitling B09 caliber, equipped with a vertical clutch and delivering a comfortable power reserve of 70 hours, is finally, as it should be at Breitling, certified chronometer by the COSC.
If starting the chronograph function requires virile pressure, stopping and resetting it is more pleasantly smooth.

I have a regret – or rather a request, in all humility.

Chronometer certification by the COSC (in particular) has become more democratic in recent years. It is now found on watches whose prices start at around USD1,500.
This is one of the reasons why companies such as Omega and Rolex have set up much more demanding certifications.

Wouldn’t the time have come for Breitling to do the same and provide chronometric data in support?
My request is applicable to a large number of brands that very often emphasize the precision of their watches without providing supporting figures.
Chapter closed but question pending.

On the other hand, fidelity is totally on the dial side – and that’s excellent news.

The latter is served by white hands offering an effective contrast, the hour and minute hands adopting, as on the original model, a so-called syringe shape – no bad pun in this vaccination period!

The AVI Ref. 765 1953 Re-Edition also retains the three-counter layout of its predecessor, the said counters being adorned with a finely executed circular azure treatment.

As on the 1953 765 AVI Co-Pilot, you will find a small second at 9 o’clock, a 12-hour chronograph totalizer at 6 o’clock and a 15-minute totalizer (and not 30 minutes as on most chronographs) at 3 o’clock punctuated, in addition to the Arabic numerals, with triangular indexes – exactly as on the 1953 model.

The specificity of this 15-minute counter alone bears witness to the real and close ties that unite Breitling to the world of aviation.
Indeed, this quarter of an hour was the time needed for the checks to be carried out by the pilot before any takeoff.

This is where the brand’s second twist lies: the dial of the AVI Ref. 765 1953 Re-Edition chronograph only displays the logo overhanging Breitling when the 1953 model added the word “Geneva” (in capital letters) under the brand name.

For those who might wonder (as I have wondered), Breitling never had a production site in Geneva. Only an office dedicated to commercial management, the mention of the Swiss city having probably been added in the 1950s for marketing purposes / credibility for export.

Design enthusiasts will be happy to see this disappearance on the Breitling AVI Ref. 765 1953 Re-Edition, the trend of the 20th and 21st century being rather to add literature!
The result being a dial even more beautiful than the one of the original version.

I humbly admit that I am not a Breitling specialist.
I know of course the unavoidable Navitimer and the SuperOcean as well as some historical references.
On the other hand, I knew absolutely nothing about the 1953 AVI Co-Pilot or its contemporary reissue. Mea culpa…

I am delighted to have discovered it and I would like to thank the brand for agreeing to entrust it to me for a few days in order to offer you a closer look. And to share my enthusiasm with you!

Particularly faithful to the original model, the AVI Ref. 765 1953 Re-Edition first pleasantly surprises by its contemporary dimensions in 2021, even though they are in line with those of the 50s in terms of diameter.

Fidelity is also in evidence on the case side with a design that is essentially vintage: mushroom-type chronograph pushers, a fine winding crown, and a very refined polished bi-directional bezel… A success.

The most beautiful is however, in my opinion, to be found on the dial side.
Almost entirely in conformity with the 1953 model, it alone can justify the acquisition of this limited edition.

Benefiting a functionality worthy of the line of toolwatches from which it comes from, it reminds us of those hours when the pilots of the air force were real heroes.
The most observant among you will have noticed the (deliberate) irregularity of the luminescent material deposited on the numeral markers, which offers us, at night, a highly vintage spectacle magnified by the presence of a domed hesalite glass!

Moreover, its sober and masculine elegance will allow you to wear the Breitling AVI Ref. 765 1953 Re-Edition in all circumstances.
All the more so as it nowadays embodies a reliable contemporary movement.

In short, a little marvel that I am a fan of!