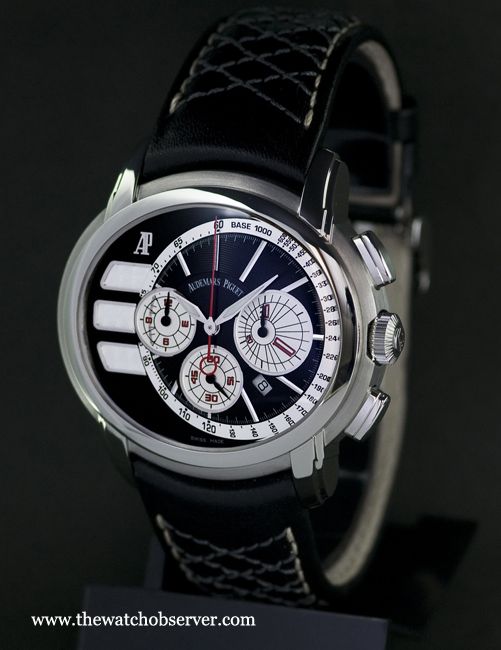 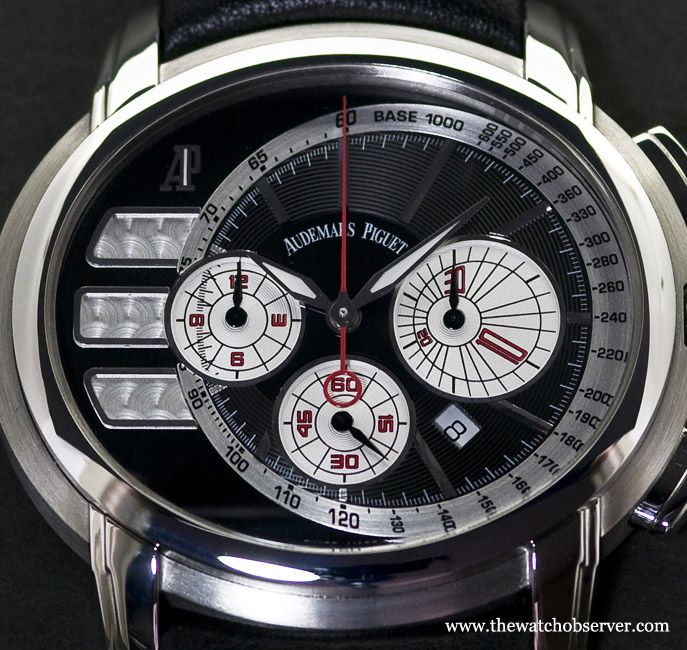 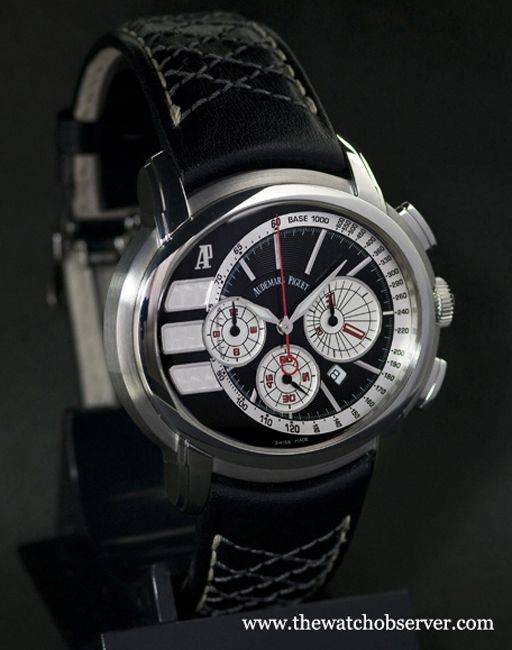 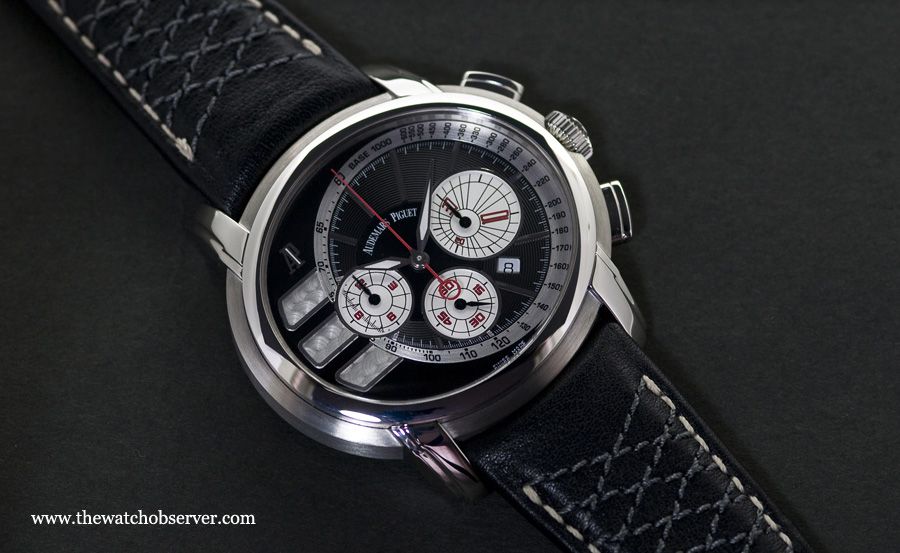 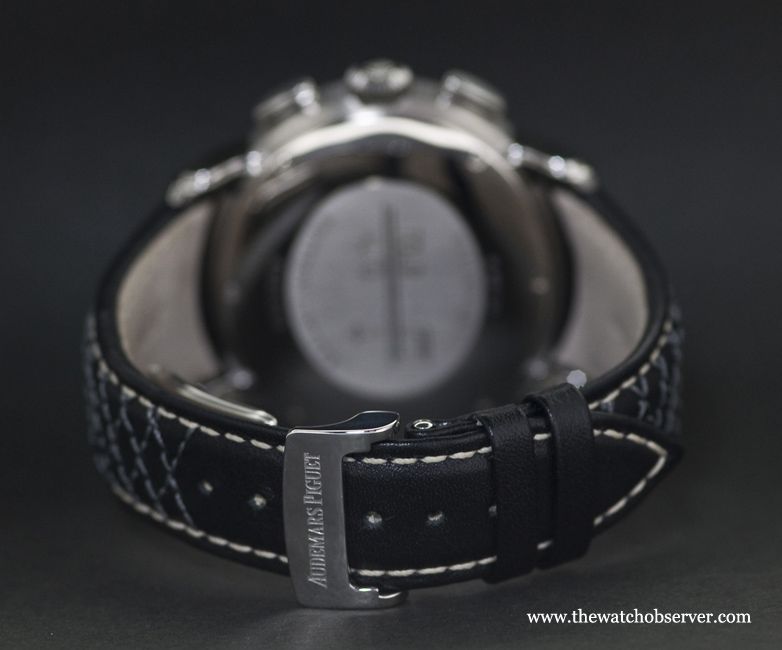 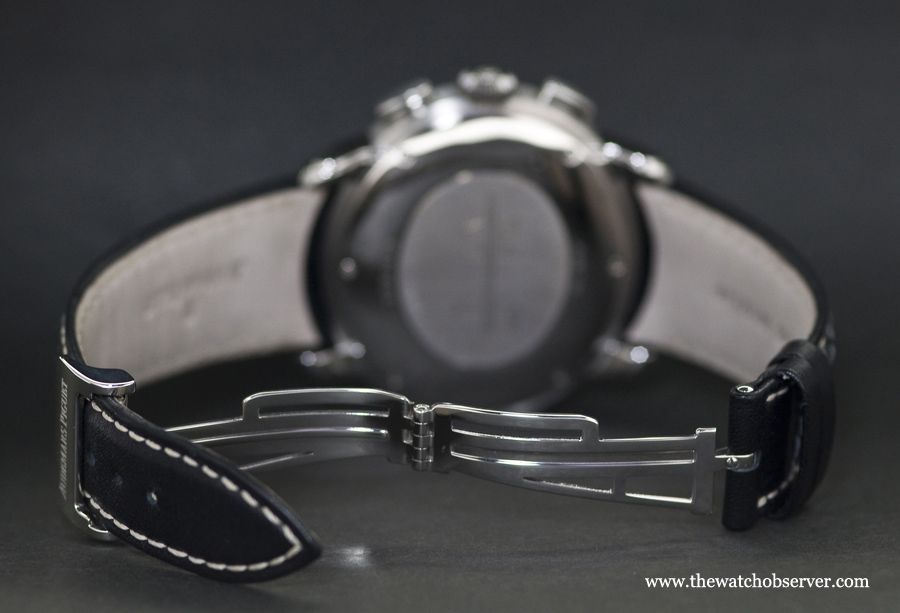 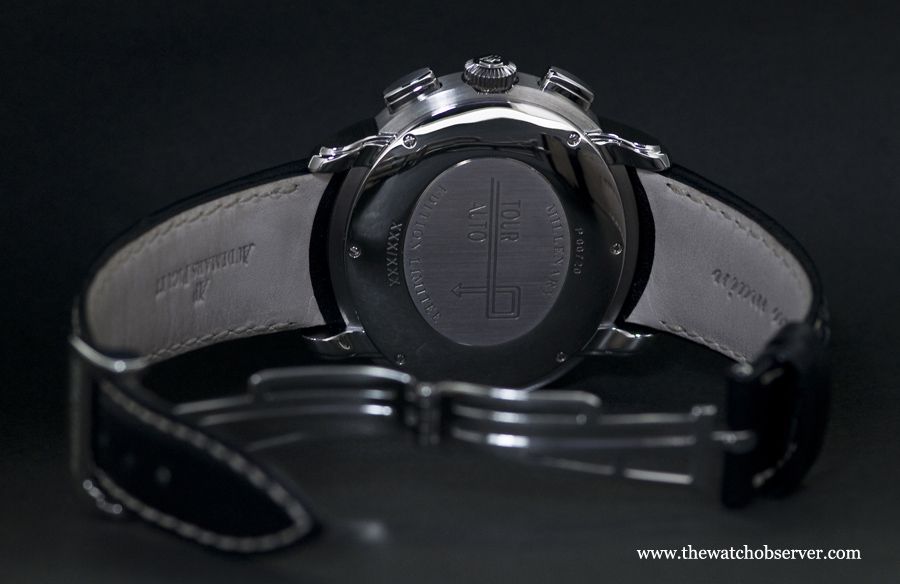 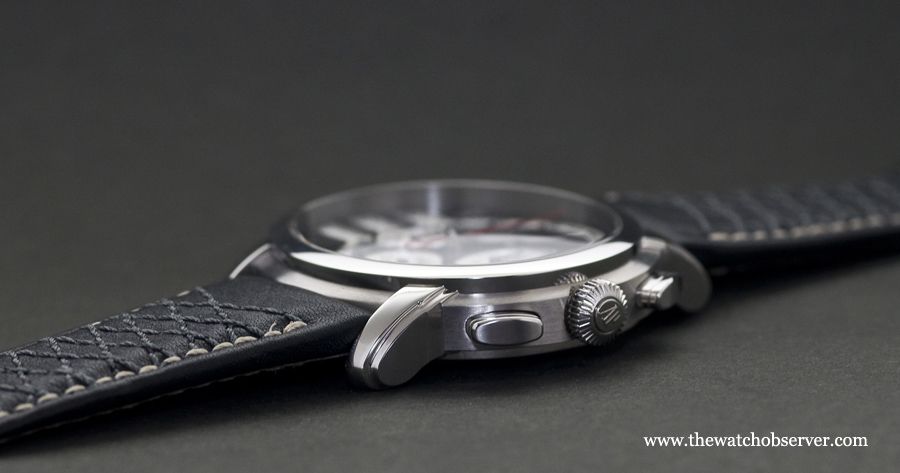 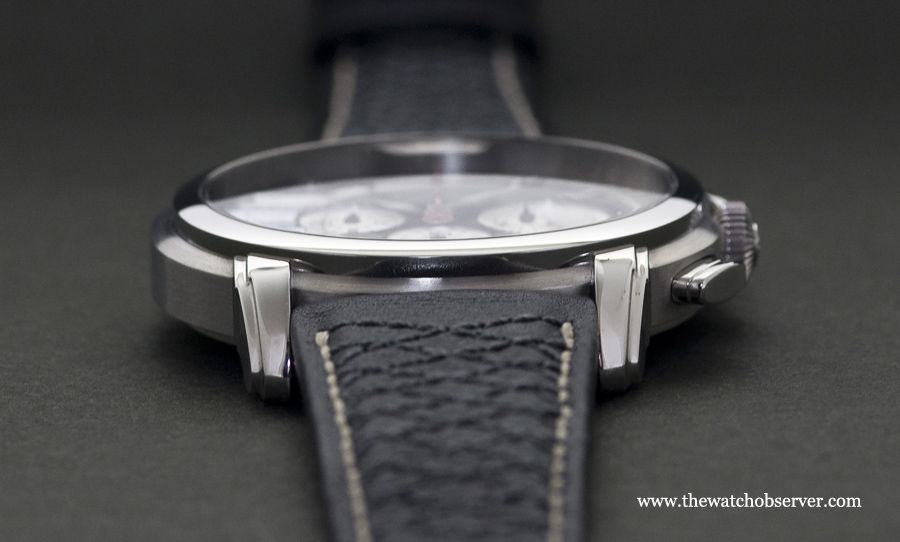 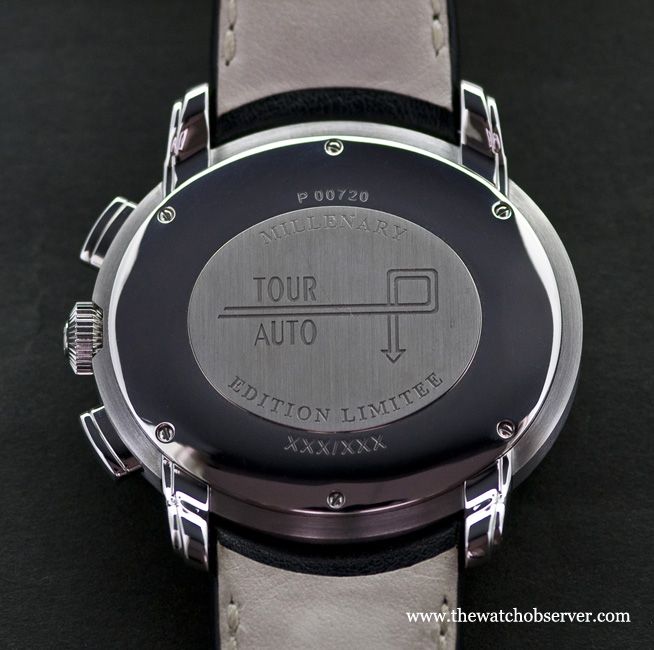 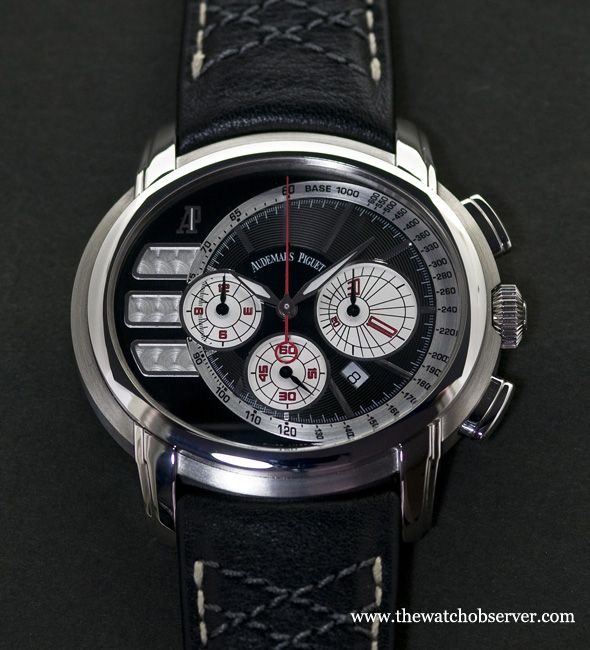 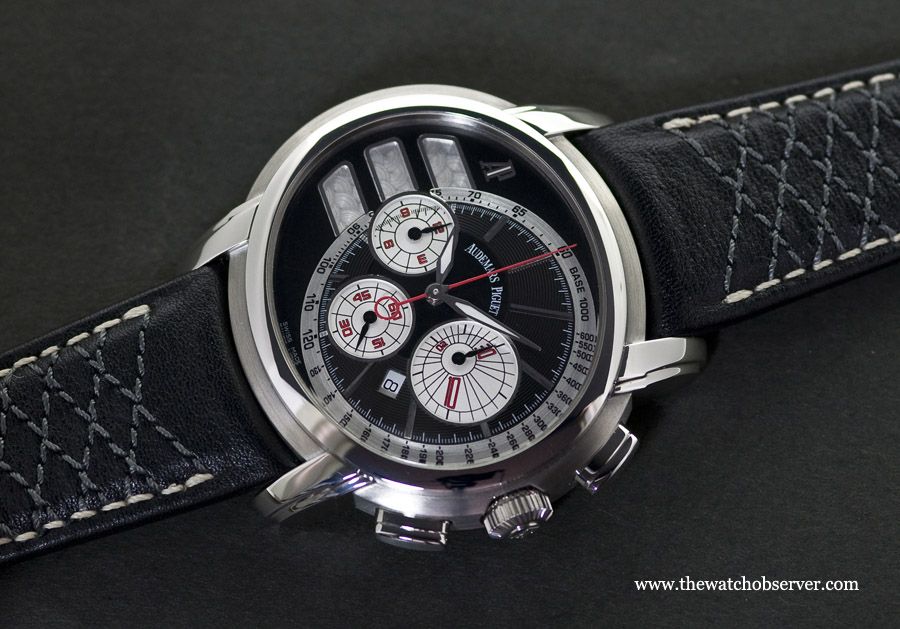 But while the Tour Auto is reserved for vintage vehicles having participated in historical races between 1951 and 1973, the Chronograph Millenary Tour Auto 2011 looks more avant-garde…
Indeed its curves possess something rather particular, like an assumed asymmetry!

If you’re skeptical, let us guide you through the discovery of this Audemars Piguet and its unusual design.

An innovative design by Audemars Piguet

The Chronograph Millenary’s surprising lines force the casual observer to take a closer look at what is normally a traditional function, the chronograph.
This Audemars Piguet seems simultaneously very modern and very retro.

The front view shows you a dial that is strangely off-center to the right, on the button side of the shirt sleeve – for those who wear their watch on the left wrist.

Yet, the hand’s axis is perfectly centered on the dial.
The axis for the hands of the chronograph‘s three counters are themselves symmetrically spread around the central axis.
The visual shift is in fact due to the surface area on the dial occupied by the displays for the chronograph and the tachometer scale, increasing in size as you move out further away from the center…but only on one side of the watch (between 12 and 4 o’clock).

The explanation may seem complicated, but a simple look at the dial will make it obvious.

Whether it’s the grey gold applied indexes, the circled and guilloche silver counters, or their black hands on a background of red and black graduations, or the tachometer, etc., the shape of all these elements seems to “fly away” as they approach the case’s periphery!

A wealth of details

The richness of the details will delight the connoisseur.

First, the chronograph’s seconds hand, red with a steel center and a hollow pierced counterweight, is visually very striking.

Then, the scale graduation inside the tachometer is carried over to the hours counter when it crosses it.

As for the hours and minutes’ hands – sword-shaped and coated with luminous material – they travel across the guilloche black background of the part of the dial that is reserved for the reading of time.

Lastly, floating in balance on the left-side of the dial are the three windows, the signature look of the Millenary line, with their brushed (or pearled) surface.
This watchmaking pattern, that we generally find on the movements’ plates, is also part of the automobile world, but is usually limited to the interior components of the vehicles.
The whole is adorned with the relief AP logo.

It quickly becomes clear the originality of design of this Audemars Piguet happens somewhat at the cost of the readability of its various indicators.
But let’s downplay the pleasure we get when a company innovates aesthetically with such success!

A great quality of finish

The specificities of this Millenary – the first of this line available in steel – do not end with the dial.

Furthermore, the shape and work on the lugs is reminiscent of Art deco style, with an unhooking system characteristic of that era.
The chronograph’s rectangular push-buttons are slightly oval, while the crown that bears the logo – protected by the case middle – boasts a pear shape.

The alternation of brushed and polished surfaces is magnificent, as is always the case with Audemars Piguet.
Watch out for scratches, though!

The balance on the wrist is natural – contrary to what this chronograph’s large size might suggest.

At the center of the plain polished backside, we find the Millenary engravings, the Tour Auto logo, and the limited edition reference, on a nicely-brushed base.

Finally, the overstitched leather strap with lozange-shaped patterns adds a nice visual touch and a sporty look to this piece.

The strap is fastened using a typical Audemars Piguet folding clasp, with its bands reprising the stylized logo, hidden from view from everyone except its lucky owner.

The overall comfort is excellent. 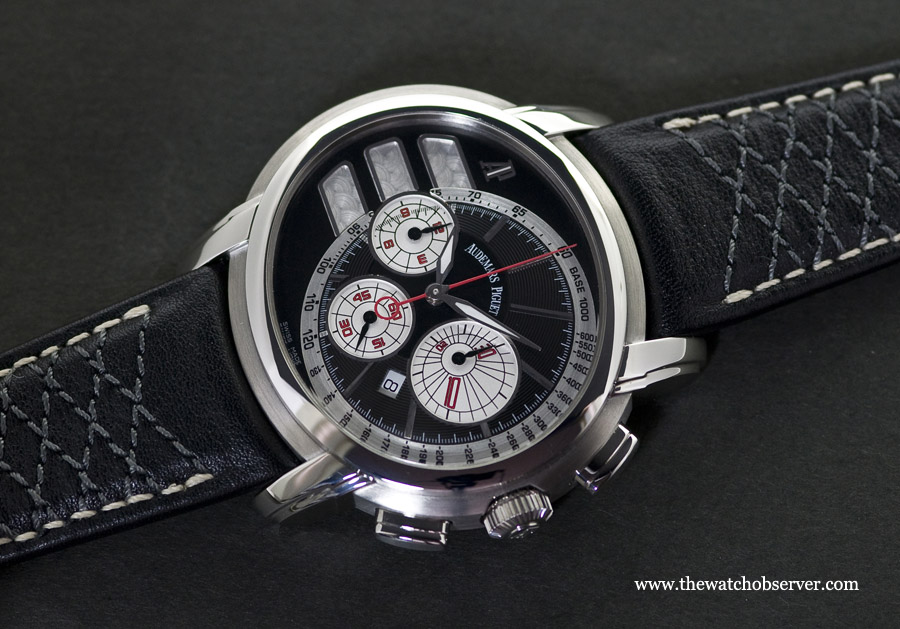 The AP 2385 automatic winding caliber – with its 18-carat gold oscillating weight – comes from the excellent Frédéric Piguet 1185, a chronograph movement with column-wheel control.

The overall manual finish of the components is meticulous: bevelling, circular graining of the plate, bridges, and Côtes de Genève.

Unfortunately, the model presented and photographed in this review being a non-working prototype, we tested its functions on another piece using the same caliber: the handling of the chronograph is so smooth that it could almost be characterized as “creamy”, and that of the crown is simple and pleasant.

The Audemars Piguet Chronograph Millenary Tour Auto 2011 is a piece that is as unusual as it is interesting.
Once the initial surprise in reaction to the dial’s original design fades, you’ll be forced to appreciate the high level of technical design, the quality of the finish, and the overall comfort.
The rest is simply a matter of taste, which is beyond our domain of competence!