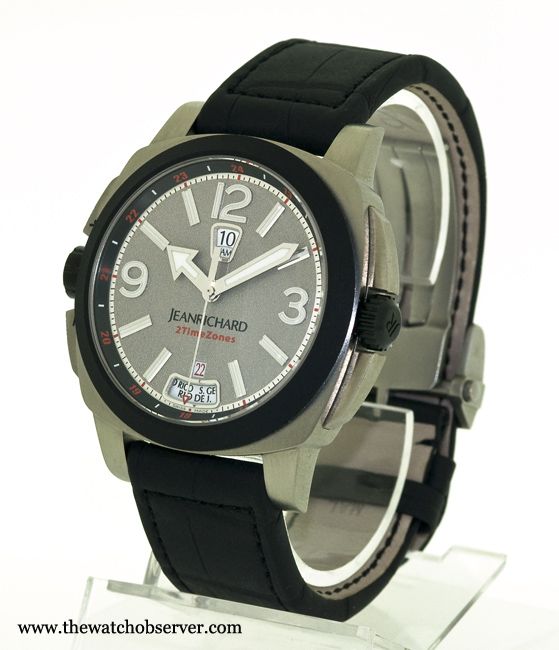 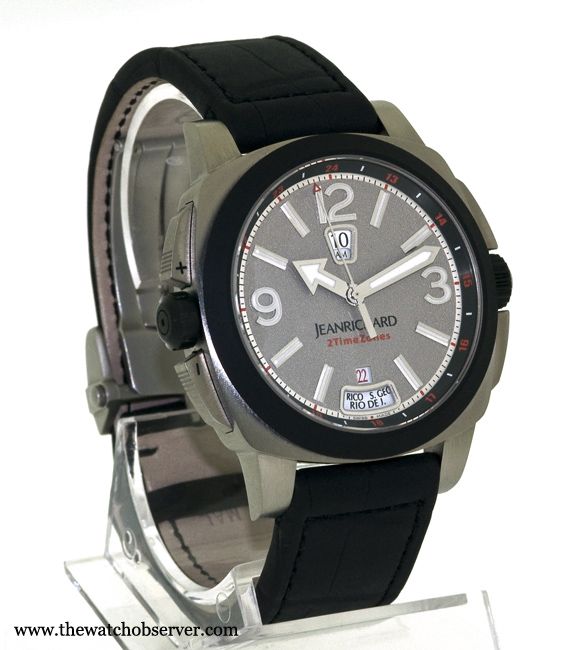 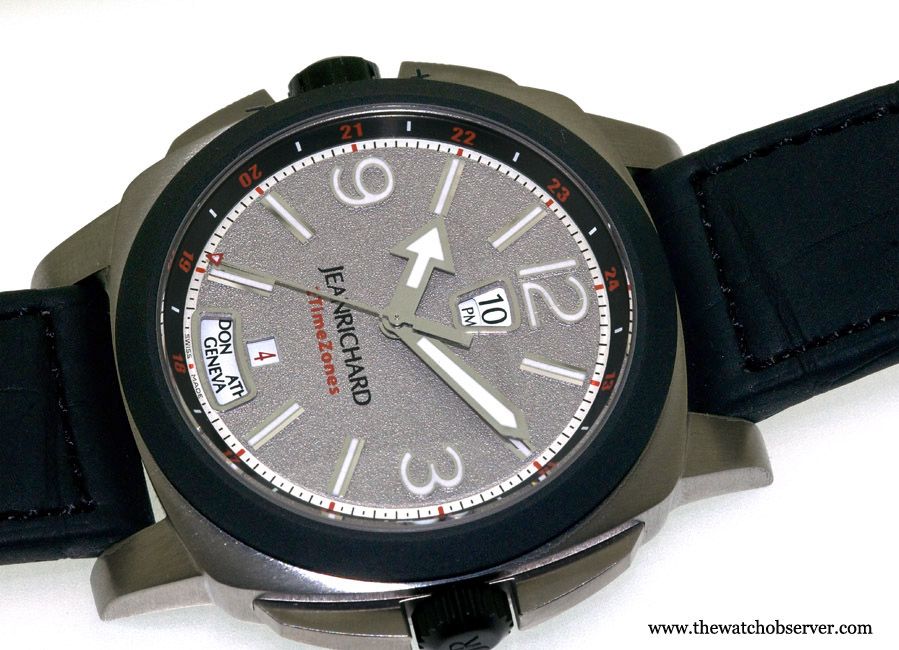 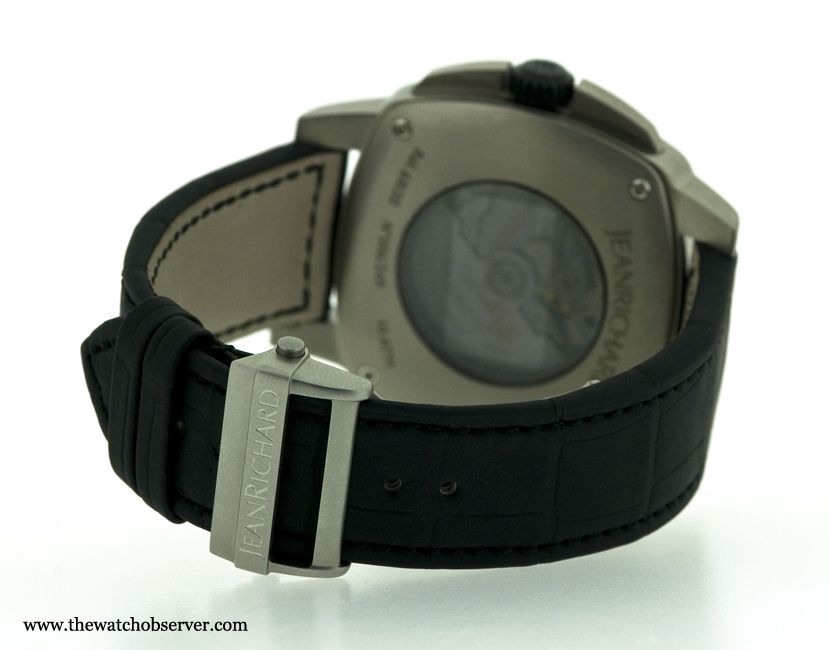 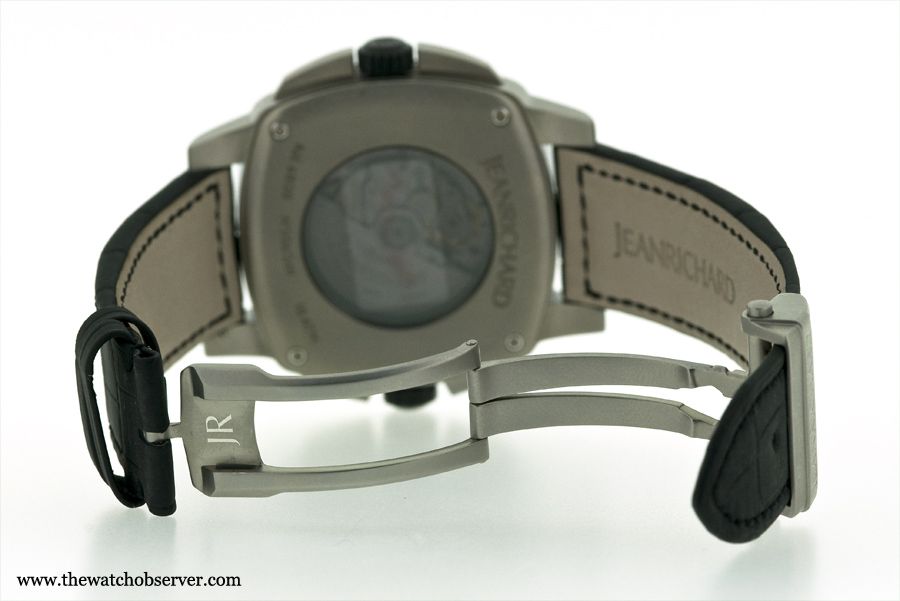 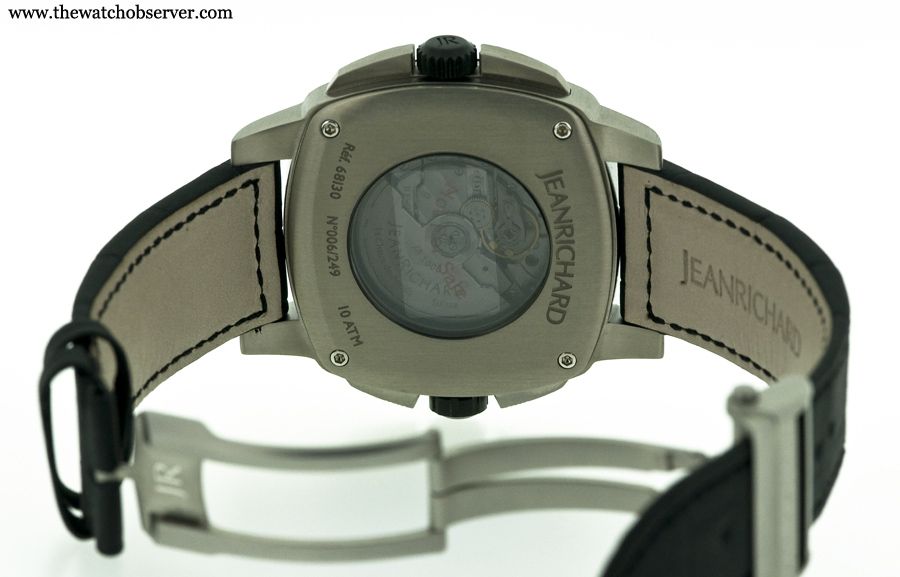 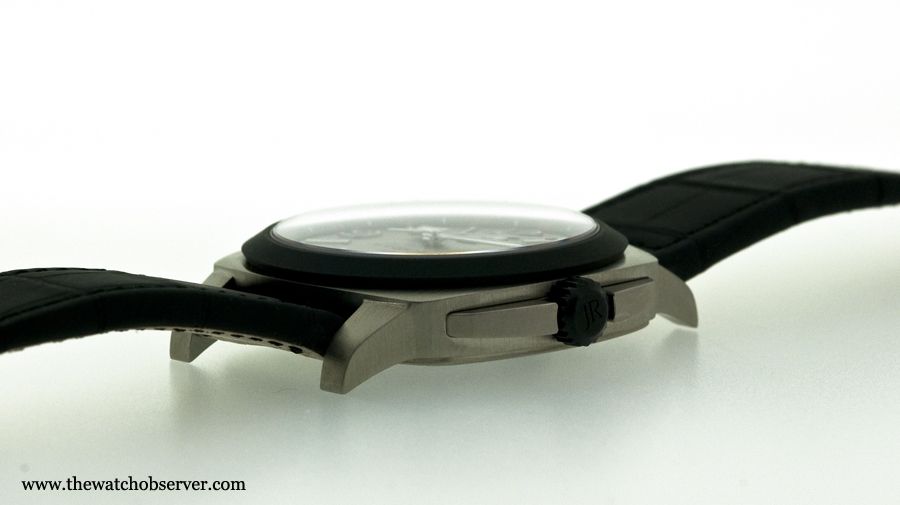 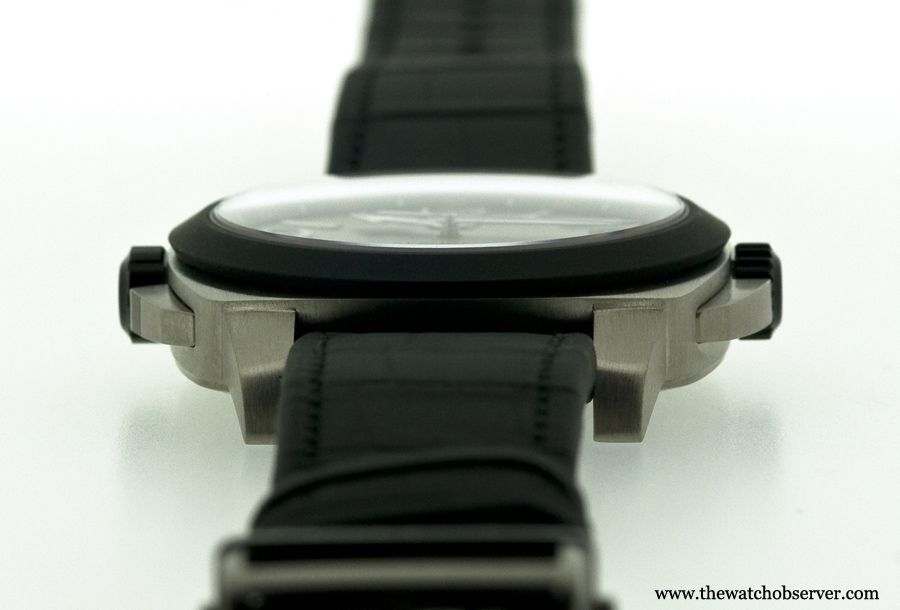 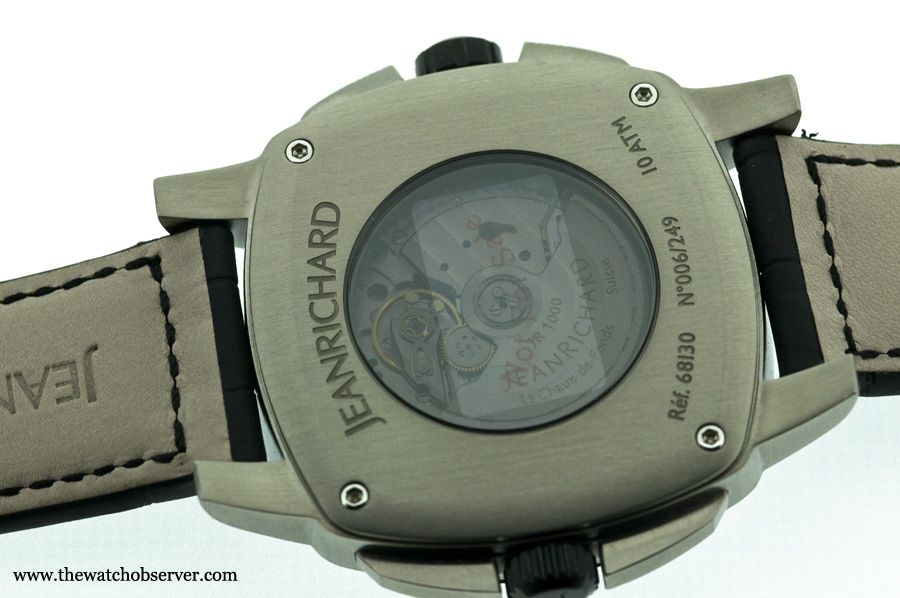 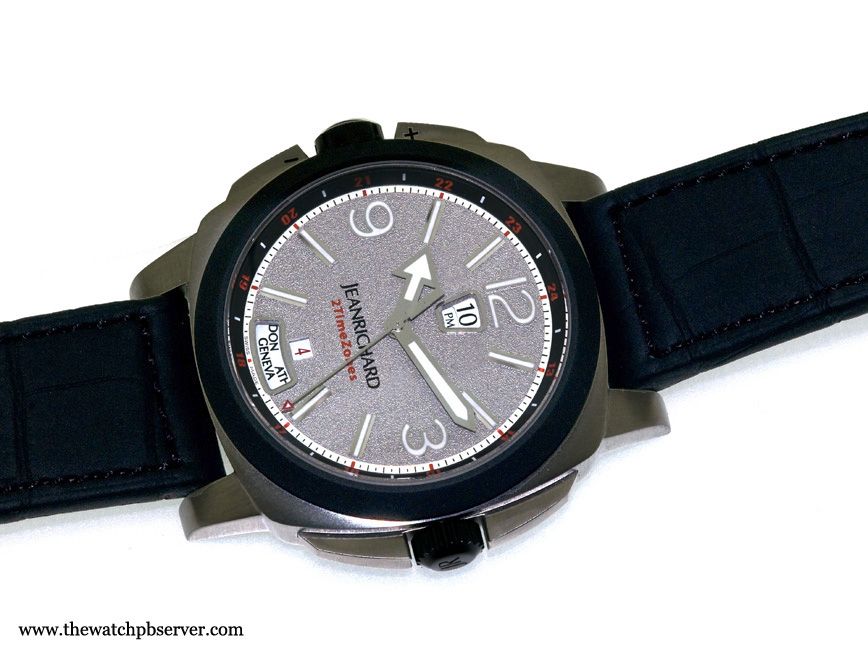 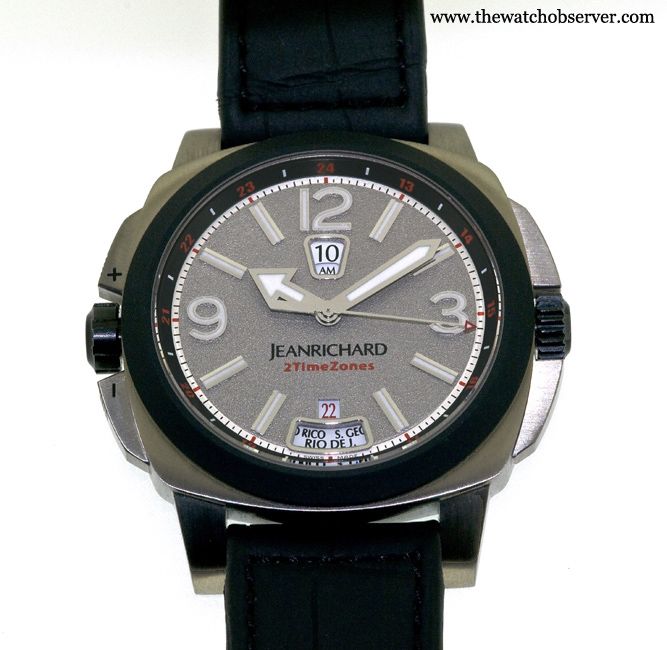 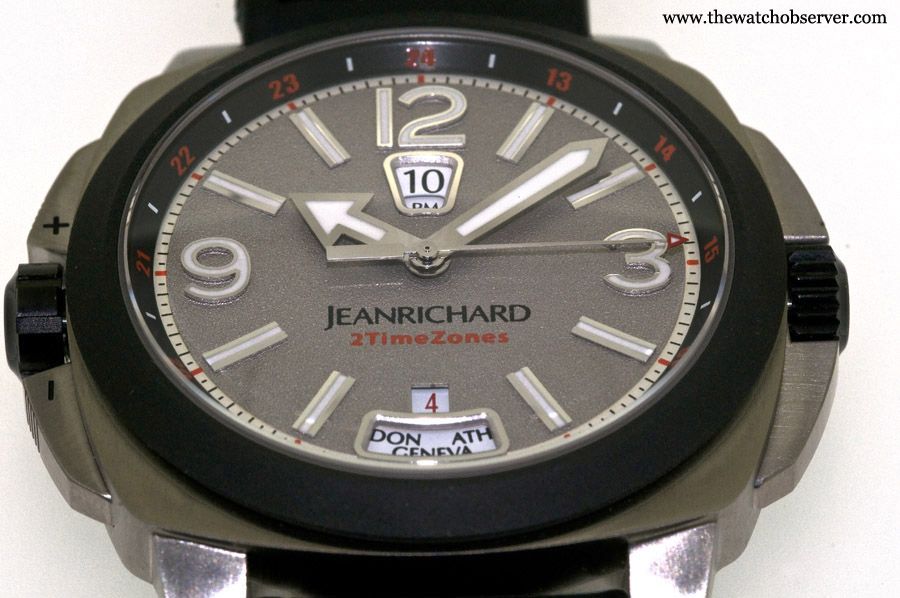 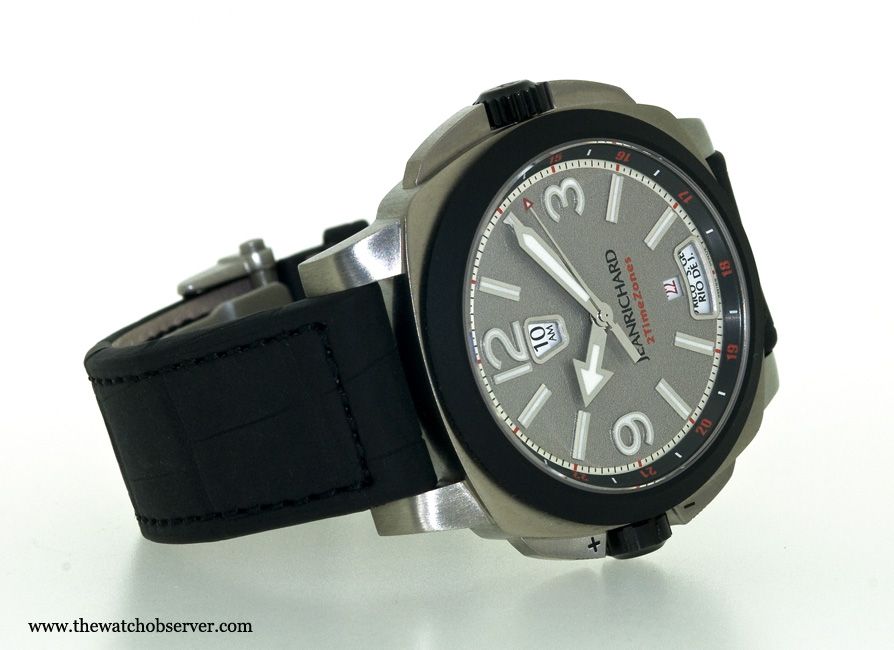 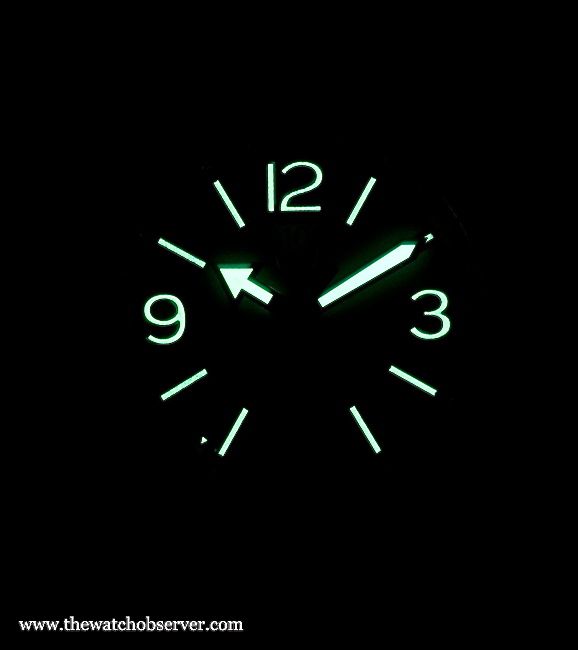 An original and meticulous case

Belonging to the Sport range of the JeanRichard collection, the tested 2TimeZones shares with it the case, but distinguishes itself thanks to its functionalities and its original material.

The large case, very carefully brushed and mixing materials, arouses curiosity.
The materials of the case middle, the zirconium (from the same group as titanium), is not very common in the watch industry.
It allows a better scratch-resistance than a classic type of steel, while being lighter.
At 9 o’clock, the push buttons are made of streaked titanium.
As for the crowns, they are PVD coated.

The case of this JeanRichard also differs from the Sport range thanks to its shape.

The crowns’ protections are over-dimensioned on their two sides, giving some volume to a yet comfortable watch, despite its 43 mm.

The strap made of rubber-coated alligator is very pleasant and takes part to this comfort.

The bezel, made of black vulcanized rubber, underlines a light and slightly silver-plated dial. It is a powder-coated and stamp-decorated.
This treatment gives it some relief.

But one might regret a little too “uniform” aspect.
Indeed, no matter the angle and the luminous intensity, its aspect remains exactly the same.

The markers and the circular graining of the apertures are rhodium-plated, facetted and spliced.
It allows a good legibility and emphasizes the given information: the reference time through the disc at 12 o’clock as well as the city of the time zone and the date through the two discs at 6 o’clock.

As for the hands, they are large and polished. It leaves enough space to apply LumiNova.
Nevertheless, this last one lacks efficiency after a few hours…

The whole is consistent but also very functional.

While the two crowns are screwed on to allow a 100 m waterproofness, they also allow a simple use and an easy setting of the watch, with the help of the push buttons.

The reference hour is set by the right crown and displays itself in the 12 o’clock aperture.

The second time zone is set by the – and + push buttons at 8 and 10 o’clock, by putting forward the hours’ hand by a one-hour leap.

It is handy but one might regret that neither the date nor the reference city of the time zone adapts itself to the local time. 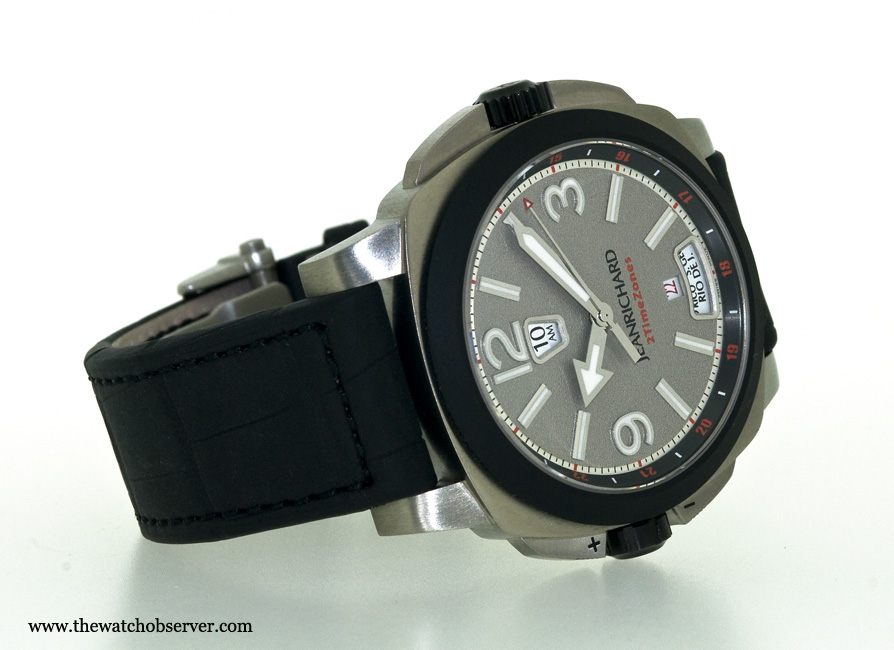 The different ranges of JeanRichard are thought around a basis in-house movement, the JR1000, to which are added some modules regarding the functionalities of the watch – here, the second time zone.

The common basis is built around a flat spiral with a 4Hz thin oscillating setting.

The automatic winding is unidirectional, the architecture of the bridges and the bottom plates is straight and the adornment, bevels and Côtes de Genève are neatly realized.

But the 2TimeZones tested here is equipped with a tinted sapphire back…
A curious choice, to say the least, since it does not allow seeing the movement…
A pity!

This JeanRichard 2TimeZones is a really interesting timepiece for its design and the choice of the used materials.
It will thus be able to seduce the amateur who is looking for an original timepiece, endowed with a strong personality.