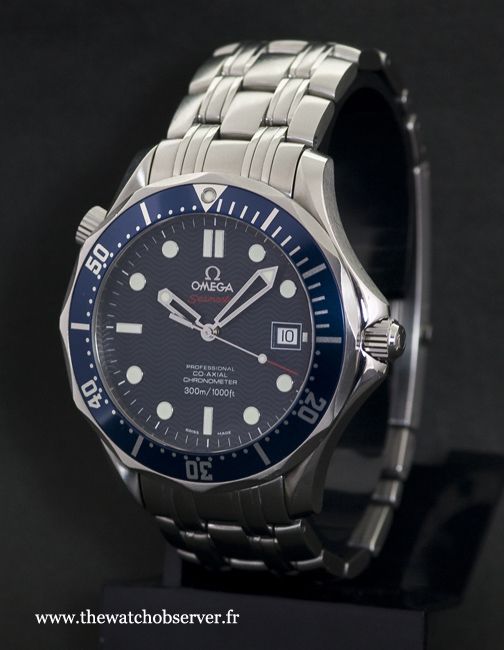 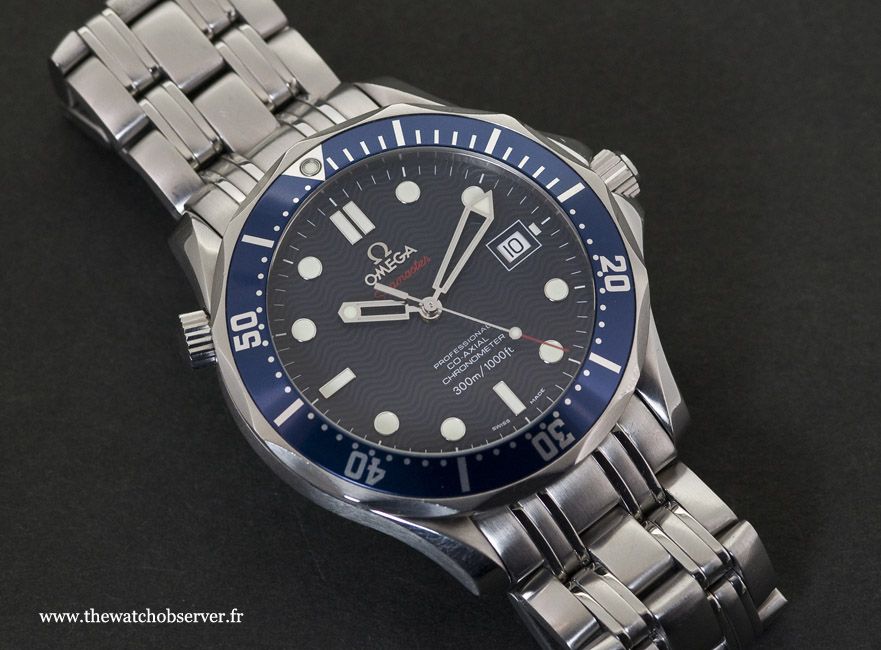 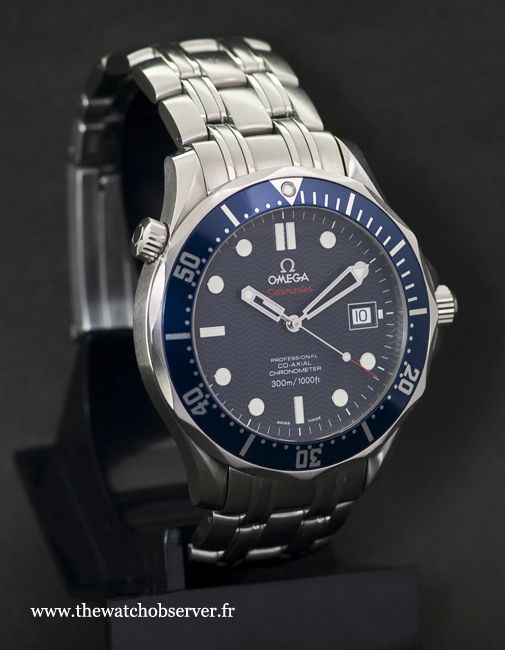 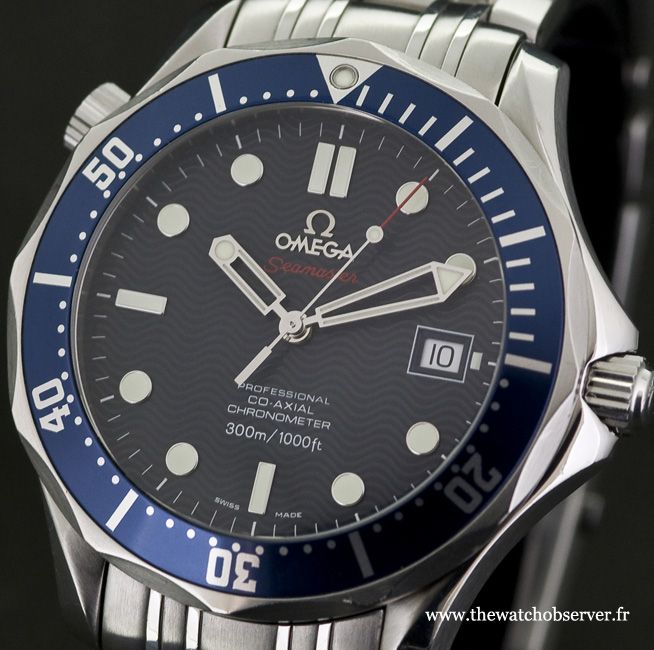 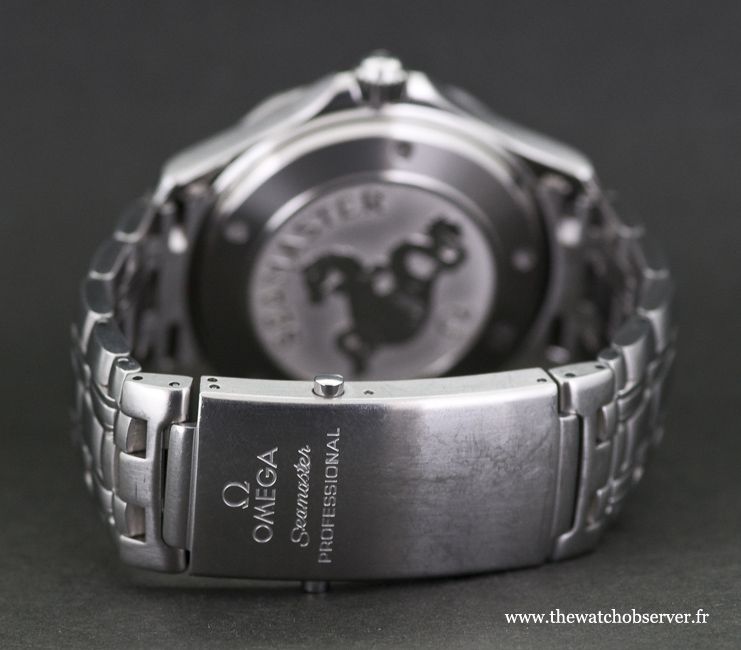 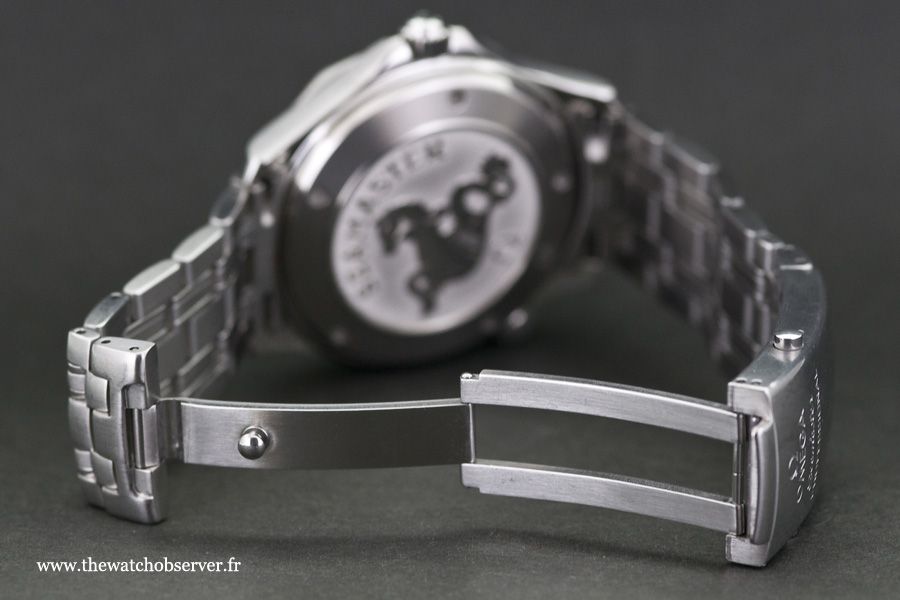 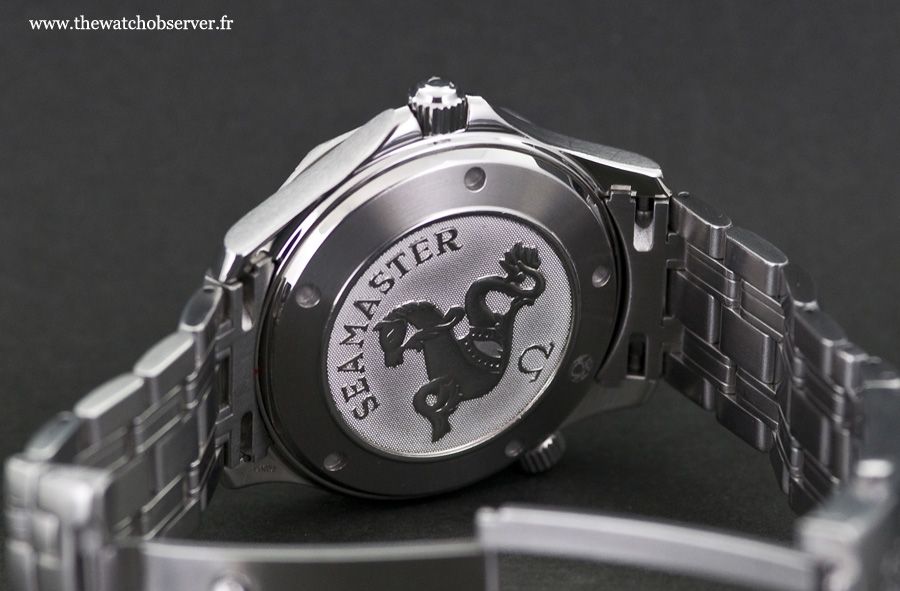 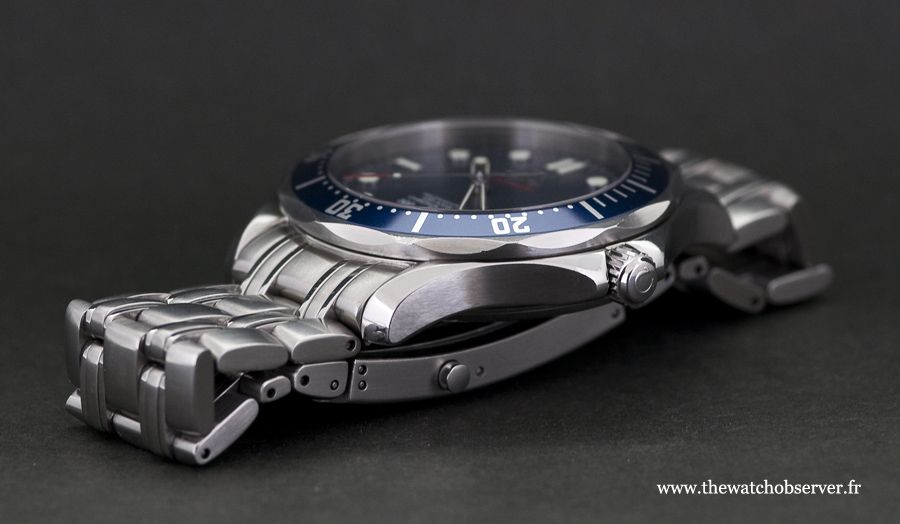 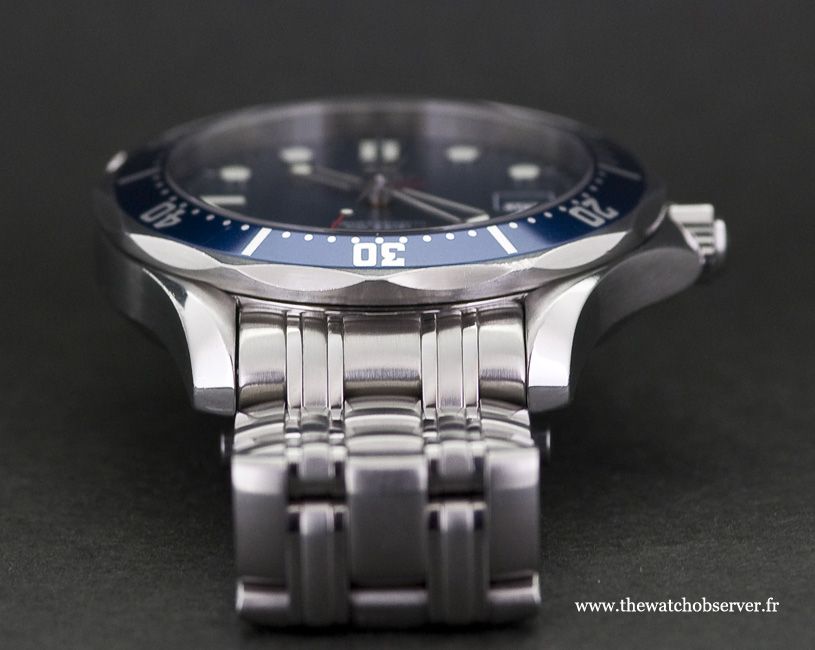 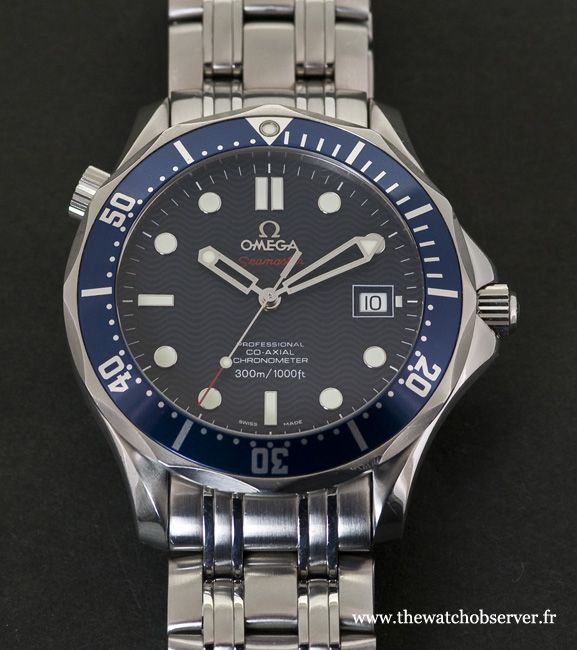 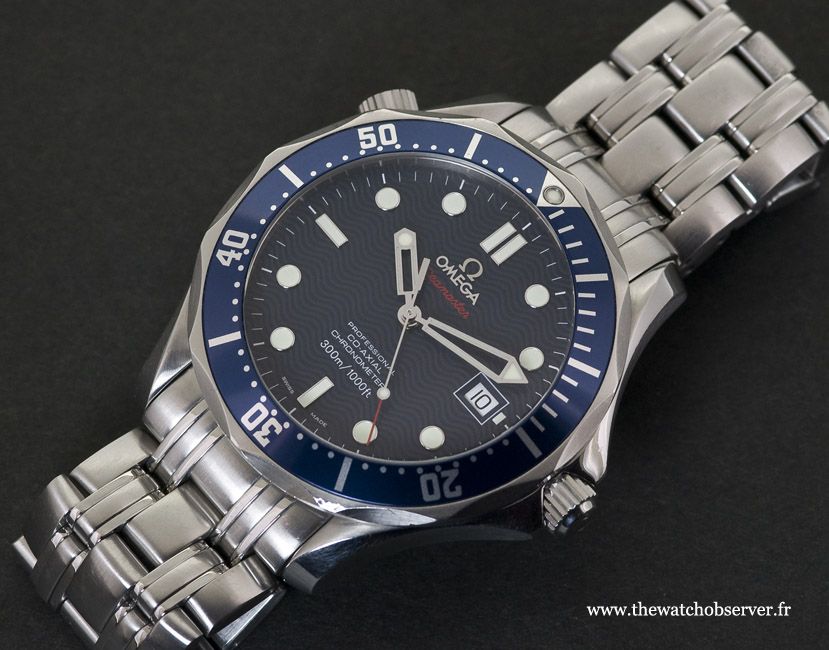 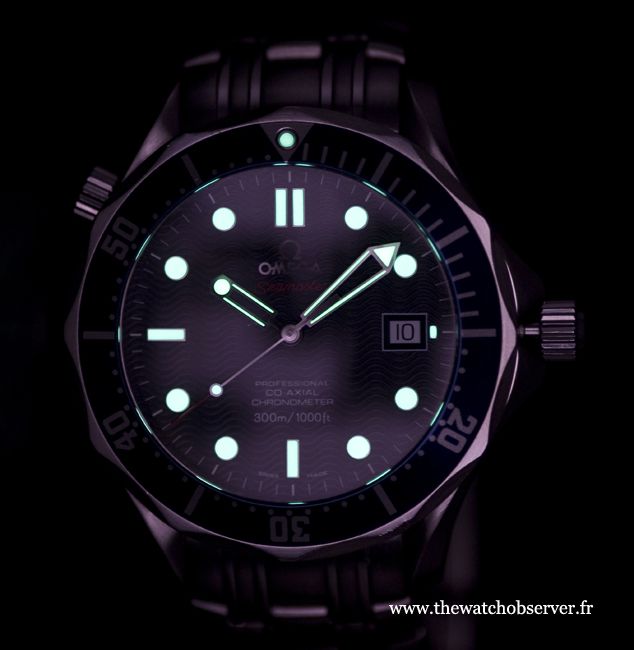 The Seamaster models, which have been part of the official catalog in one form or another for more than 40 years, were the first diver’s watches made by Omega.

While the Seamaster family has been expanded and now includes the Planet Ocean series, the Seamaster 300 M Chronometer remains the reference watch for many fanatical enthusiasts.

The model has evolved tremendously over the years, so much so that the current version doesn’t bear any resemblance to the original Seamaster.
It has nevertheless succeeded in preserving its core essence.

The Seamaster 300 M is to the diver’s watch what the ultra-famous Speedmaster is to the chronographs: a must-have for countless collectors!

In fact, there are not one, but two Seamasters based on the same watch.

First, there is the “Peter Blake”, with its very sporty look, and black dial with sword-shaped hands and large triangular hourmarkers.

Then, there is the “James Bond” (the model reviewed today), the more versatile of the two, with a dark blue dial, skeleton hands, and round markers.

Why is it named James Bond?
Quite simply because (thanks to the magic of product placement in movies) this Omega has been Her Majesty’s spy’s official watch for many years (alternating with the Planet Ocean).

There is even a scene in the movie “Casino Royal” in which Daniel Craig proudly explains to Eva Green that his watch is not a Rolex, but an Omega!

A watch easily recognizable amongst all others

The watch itself is entirely deserving of its reputation.

The shape of the case is immediately recognizable with its lyre-shaped lugs and its angular bezel.

The finish of this Omega is of an excellent quality and is often used as a benchmark: when talking about a sports watch priced under 3,000 Euros, it’s virtually impossible to not automatically compare it to the Seamaster.

Another unique characteristic of this watch is its helium valve located at 10 o’clock.

It’s a totally useless device from a practical standpoint (hardly no one uses diving bells anymore), but it’s part of the watch’s DNA, to the point where it’s now become an essential distinctive element of the model.
Even from thirty feet away, your diving partners (or office colleagues) will notice that little bit of James Bond on your wrist.

The dial is adorned with “waves”, and while this certainly cannot be qualified as guilloche engraving (the waves are really more “stamped” into the body of the dial), the result produces great lighting effects.

The dial’s color changes constantly, and you will not get tired of admiring it!

The dial’s finish is of a high quality, with its circled markers and applied logo.

Some might potentially find the amount of text to be a little excessive: “Professional co-axial chronometer 300m / 1000 ft”.
But here again, this is another distinctive characteristic of this model.

For the movement, Omega relies on its 2500 caliber.
It’s essentially a customized ETA 2892 base on which Omega has grafted its co-axial escapement.

The co-axial caliber was invented by Mr. George Daniels, one of the world’s most reputable independent watchmakers, and is used in theory to improve precision while minimizing the need for lubrication. 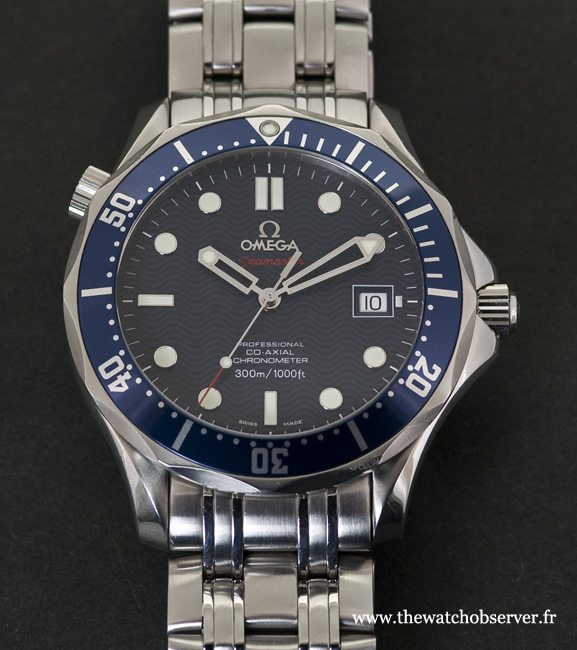 Each ruby engages itself less deeply on the teeth of the escapement wheels than on a regular escapement, thus generating less friction and giving the co-axial escapement the ability to run without lubrication.

A new escapement is always a technical achievement, but we have to nevertheless acknowledge that its concrete improvements are barely noticeable on a day-to-day basis.

The Seamasters that are equipped with a co-axial escapement are indeed very precise, but so are the models that are not equipped with one, with both versions being C.O.S.C.-certified.

Furthermore, while the escapement does not necessitate any lubrication, the rest of the movement does, and still requires regular maintenance.

This Omega feels very comfortable on the wrist.
It’s rather thin, with a reasonably-sized diameter, and fits nicely in any event.

The readability is excellent, day or night.

The bezel is easy to handle.

The strap is equipped with an integrated extension giving those who would like to take their Seamaster 300 M Chronometer with them to go see some fish the ability to wear the watch over a wetsuit.

This classic watch is, despite its age, still worthy of its reputation.
With this Seamaster 300 M Chronometer, Omega offers us a watch which will satisfy both the rookie amateurs who will foremost appreciate its value for the money, but also the experienced collectors attracted by the appeal of its legend.