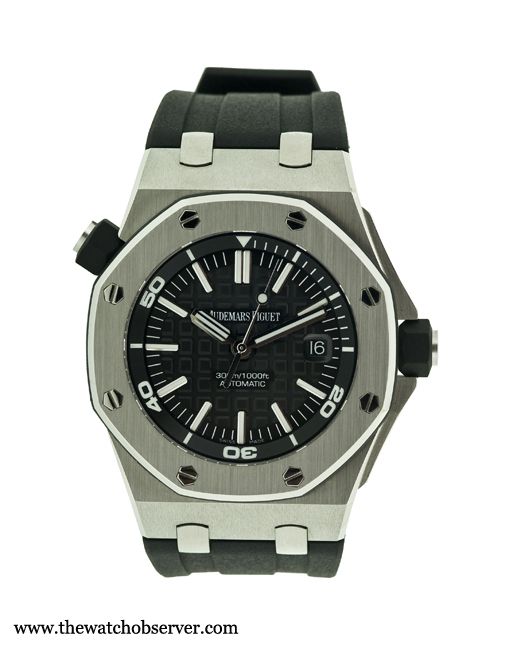 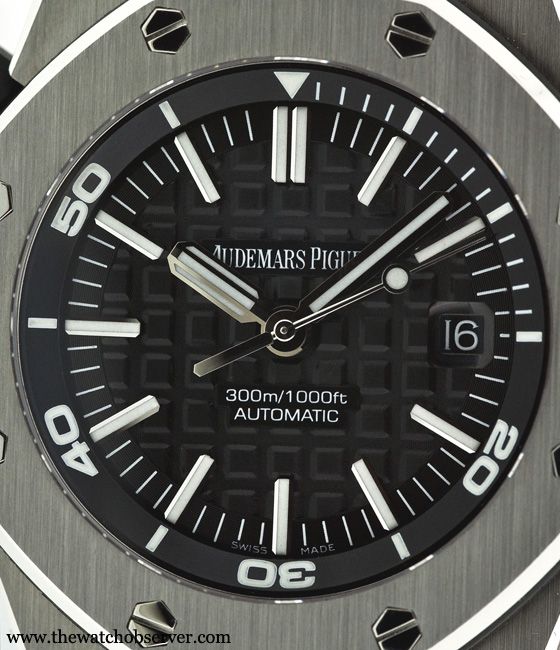 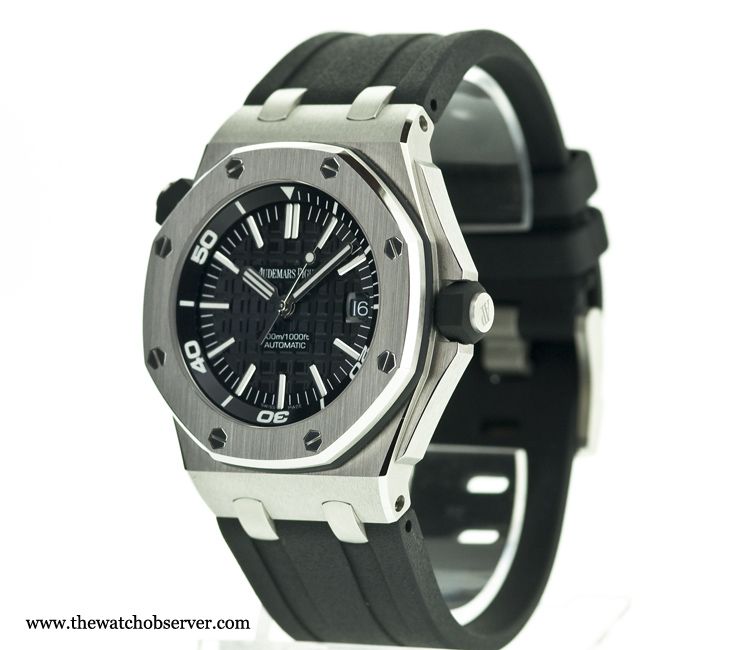 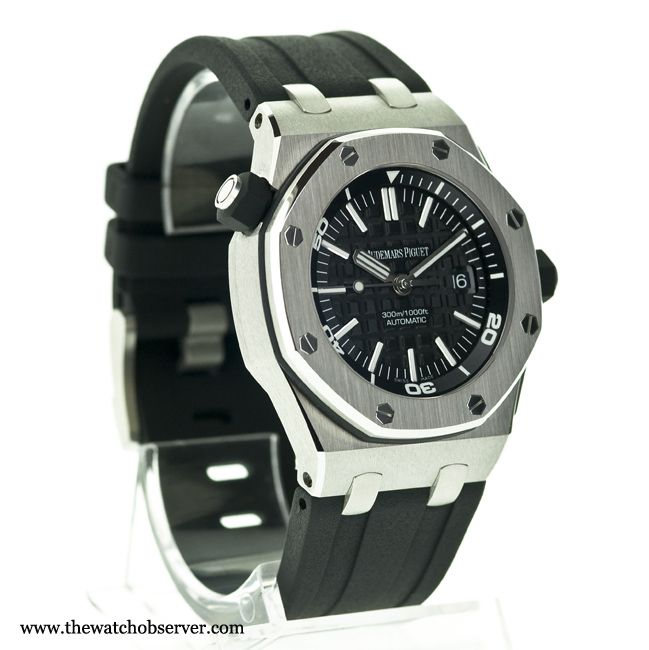 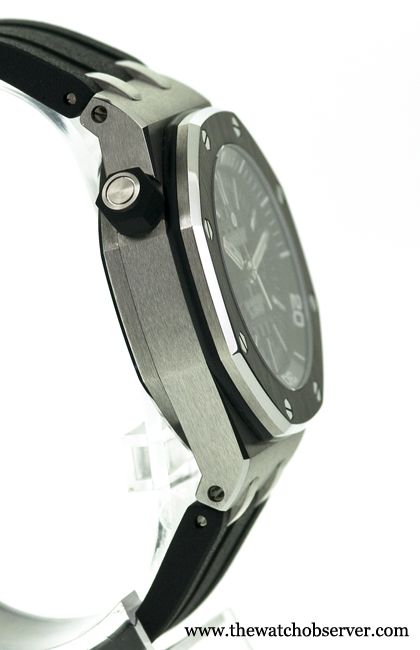 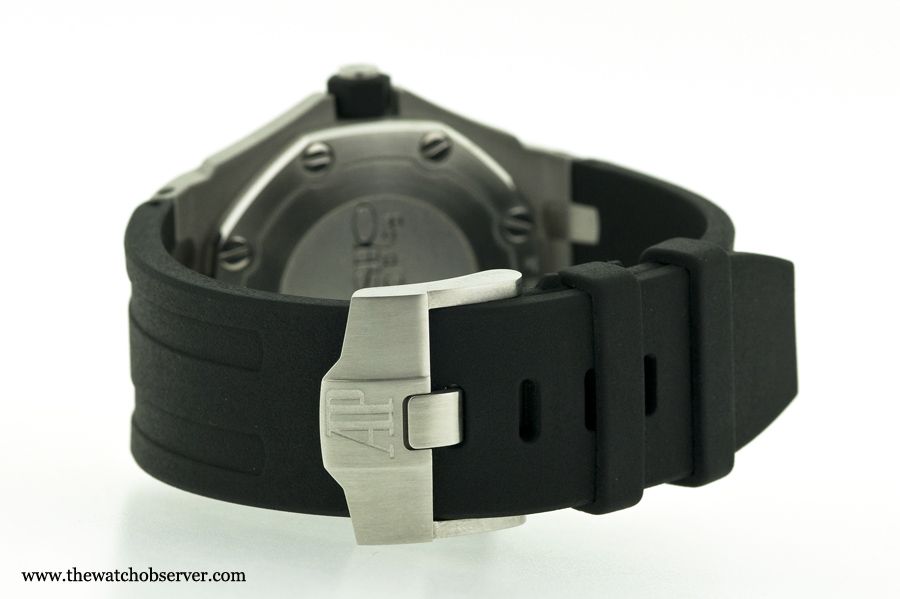 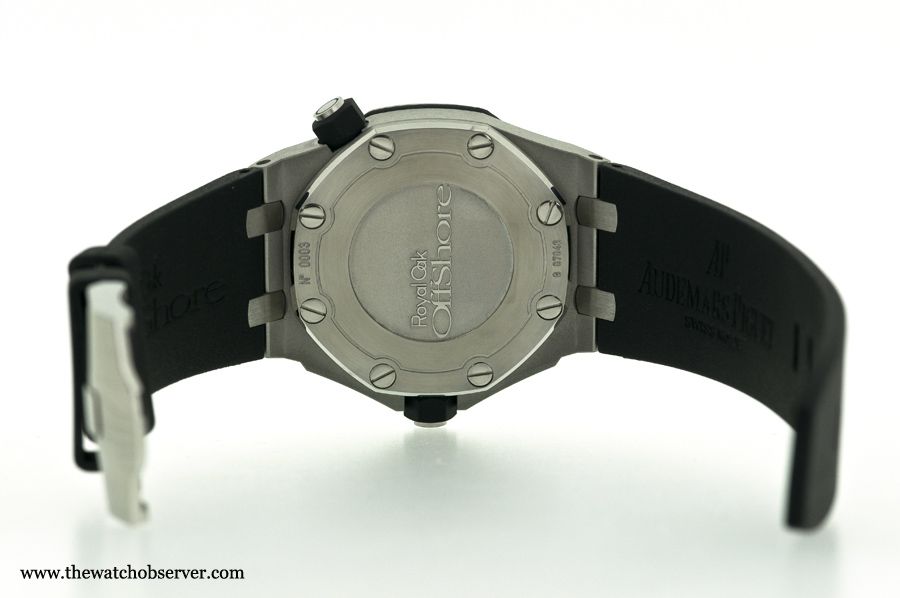 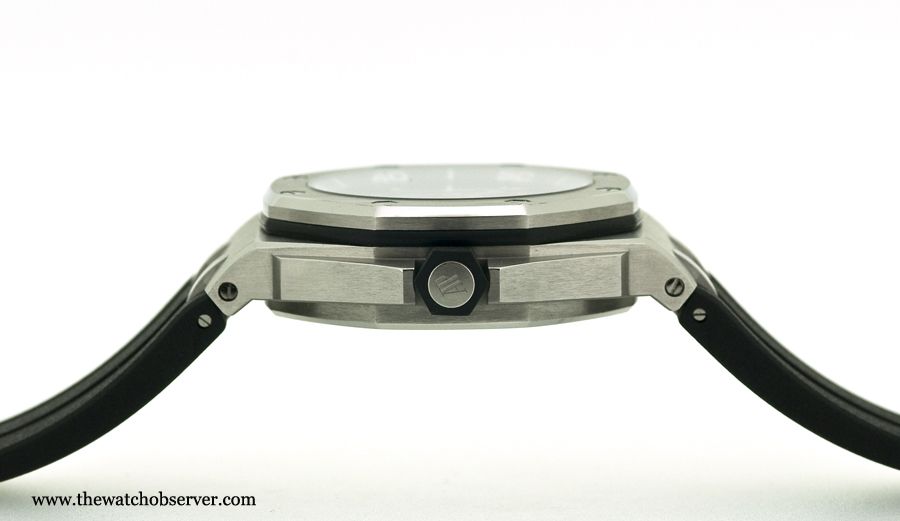 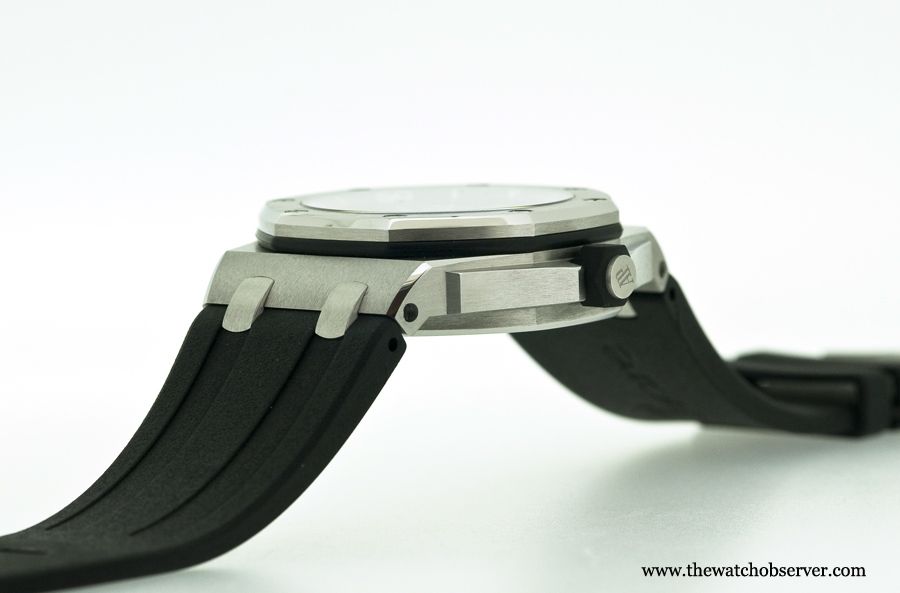 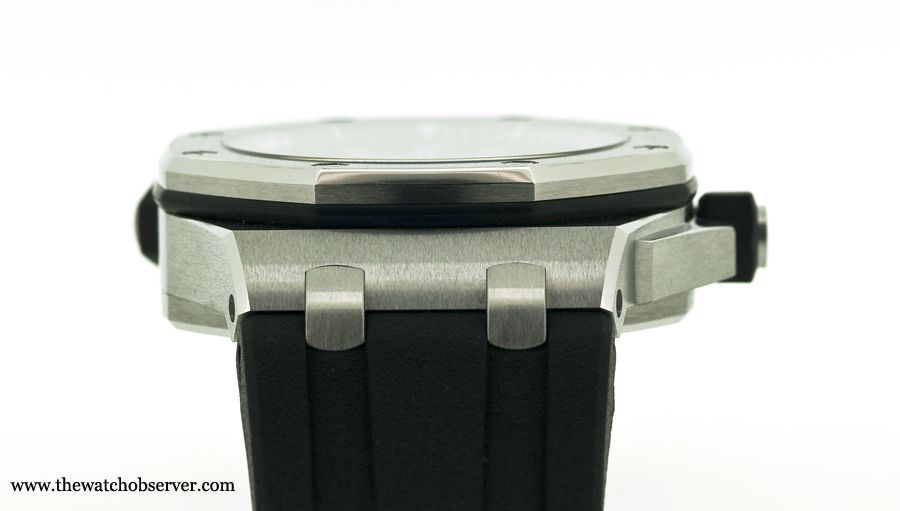 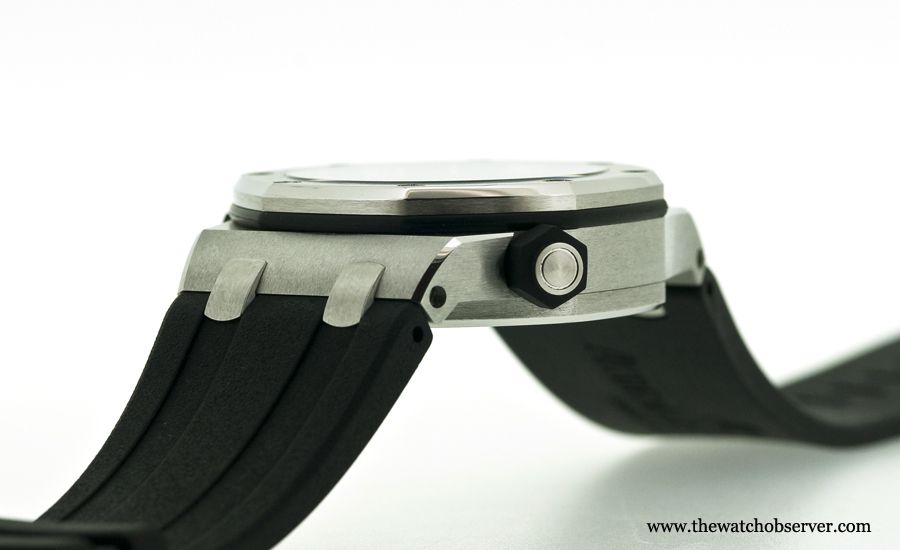 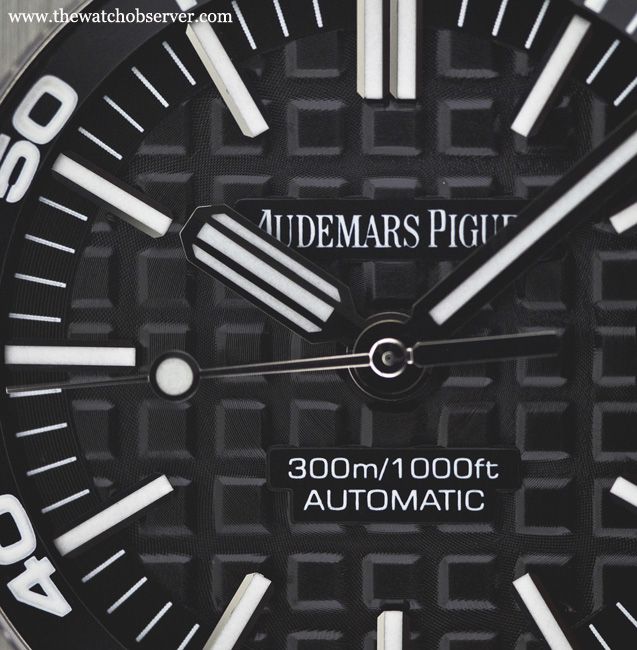 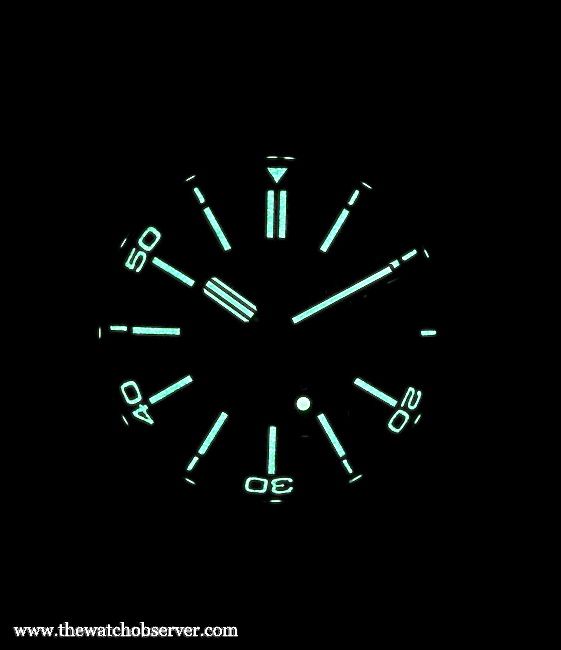 Introduced during the 2010 SIHH, the Royal Oak Offshore Diver is a diving declination of the famous Royal Oak Shore.
Sober in this 3-hand version than its eldest chronograph sister, it does not lack arguments.

A watch that does not disown its origins…

Designed in the 1970’s by the well-known designer Gerald Genta, the Royal Oak “claimed” itself to be, at that time, “the most expensive steel watch in the world”.
However, this does not prevent the brand from launching the “sport/smart” steel watches fashion, trend that has been lasting now for more than 30 years!

It is during the 1990’s that the Royal Oak has known its first huge development, with the advent of the “Offshore” range, more muscular and endowed with a chronograph.

As for all the Royal Oak, the Offshore is immediately recognizable thanks to its stunning hexagonal screws (which are actually some nuts, the bolt being screwed through the back) and thanks to its visible thick seal between the case middle and the bezel.

Of course the whole characteristics are found on the Offshore Diver, which main novelty is to swap the chronograph against an internal bezel, allowing measuring the time of diving.

…. but that evolutes with its time

The finishing is measured up to the reputation of the brand: outstanding!

The metal work on the case is gorgeous, as well as the one on the dial, which guilloche work allows an amazing game of lights.

To the point that it is difficult to imagine bringing this marvel to – 30 meters (or – 300) and risk hitting it with a piece of coral! 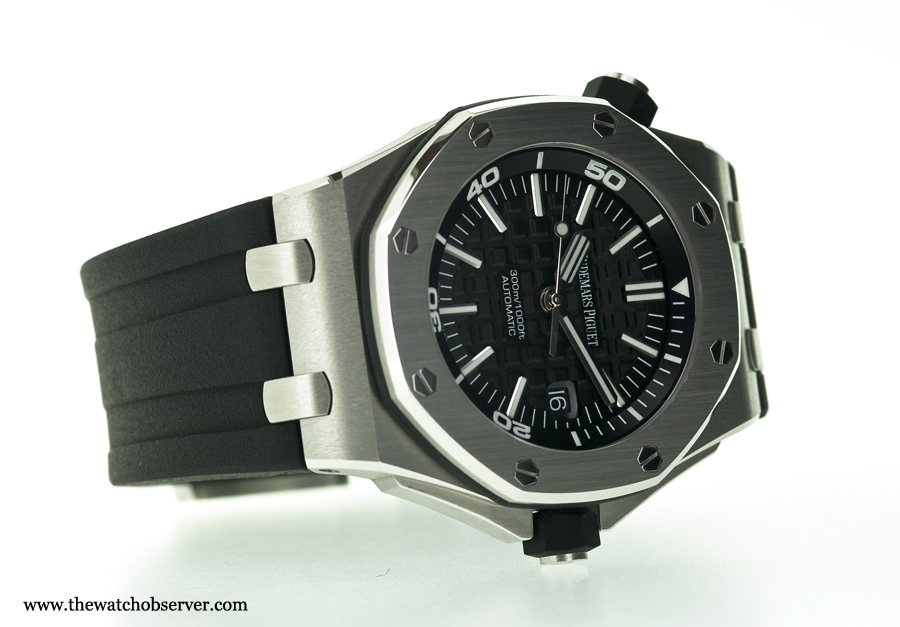 Besides, Audemars Piguet does not seem to have really conceived this Diver for diving…
If it were the case, why would it have an internal unidirectional bezel?

It is superfluous since a crown has to be unscrewed to manipulate it (so no risk that it happens by accident), but makes the exercise particularly long (a full crown turn is necessary in order to make the internal bezel turns around a complete dial).

When wearing it, this Audemars Piguet appears bigger than its real size (which is reasonable, since it is a 42 mm diameter watch) and has a nice presence.

The rubber strap is very comfortable and allows using it 365 days a year, including during the heavy summer heats.

To put it in a nutshell, this “social diver” is a real success: the absence of the chronograph gives more soberness to the whole and the waterproofness reviewed to 300 meters will allow to bring it to the beach in total peace.

It also allows to cut the price, in order to make the cheapest Offshore of the range, with an almost €4,000 savings compared to the chrono…

Hence, you can keep a little bit of “change” to buy a real “tool watch” to assist you in real risky situations, without the fear of any damages.