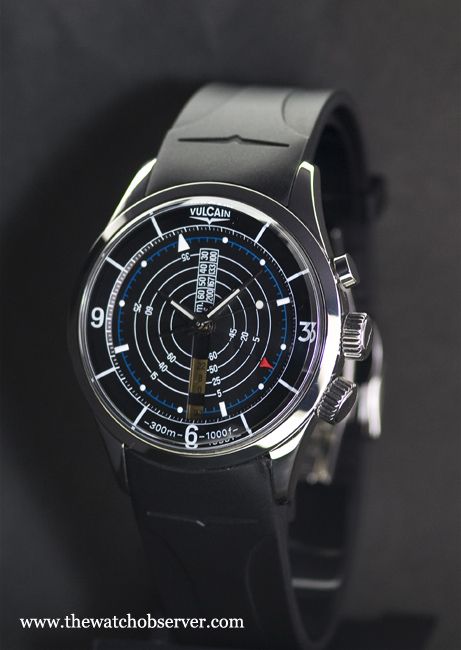 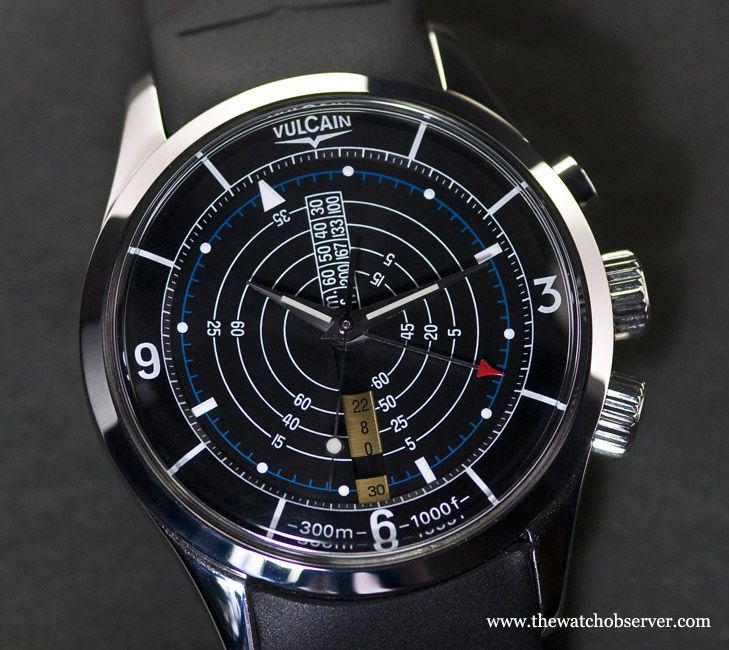 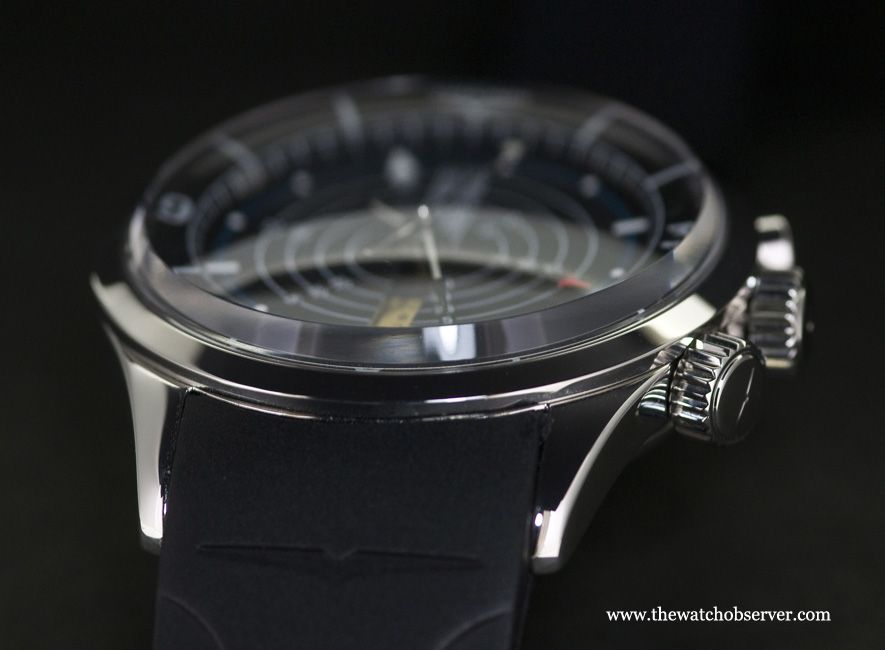 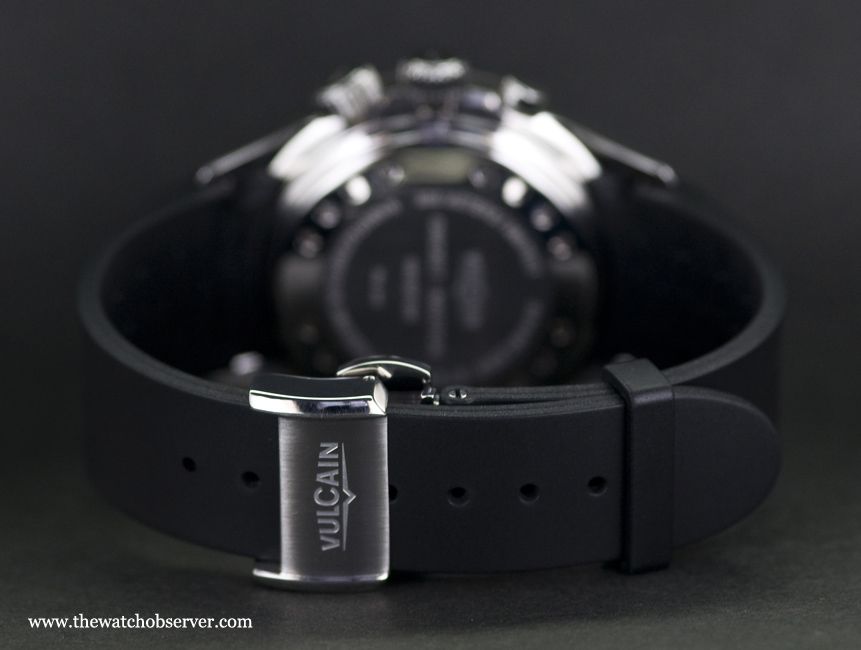 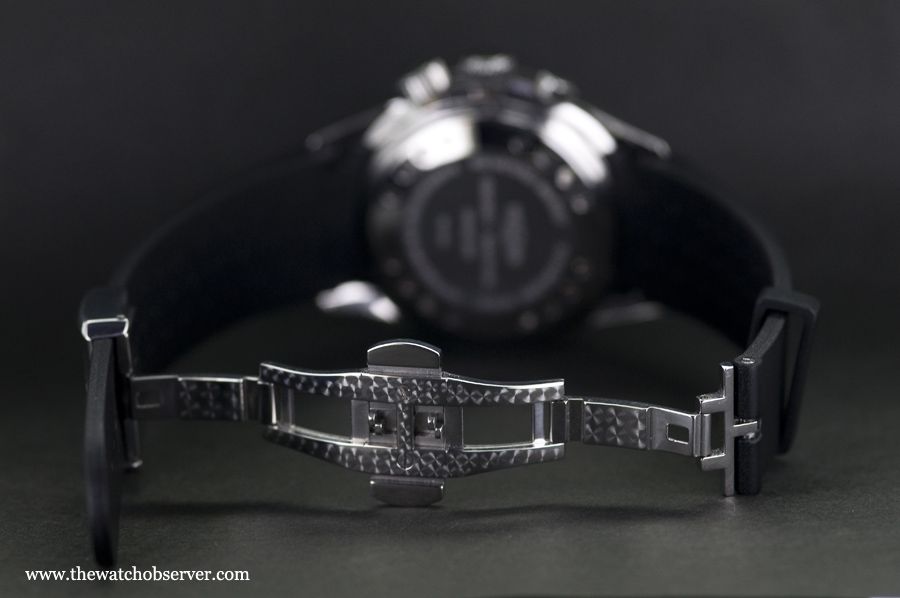 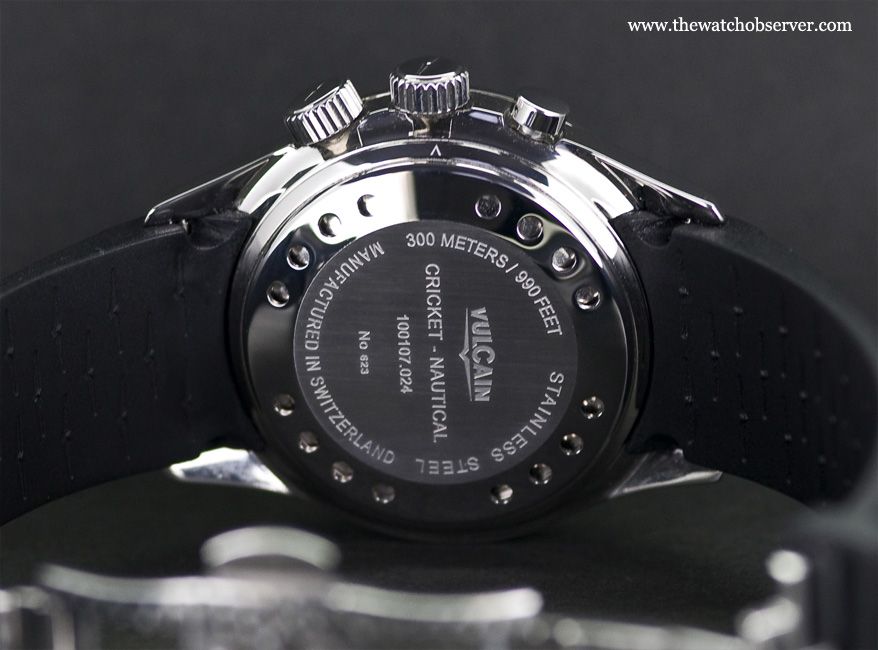 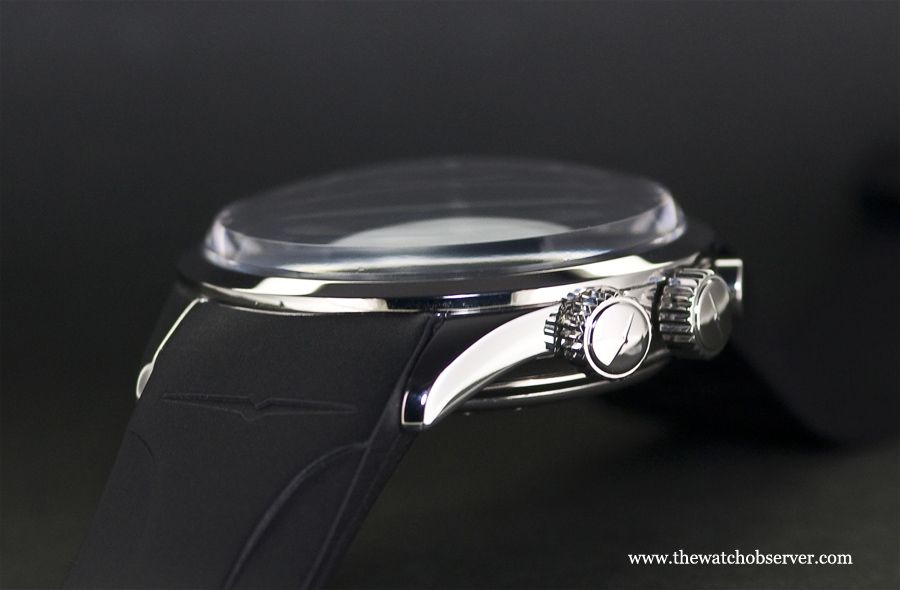 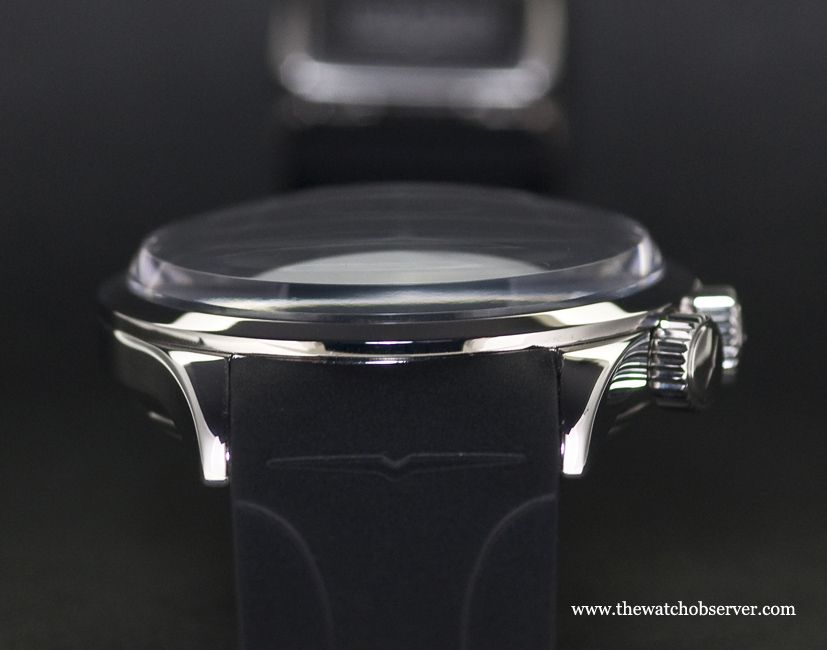 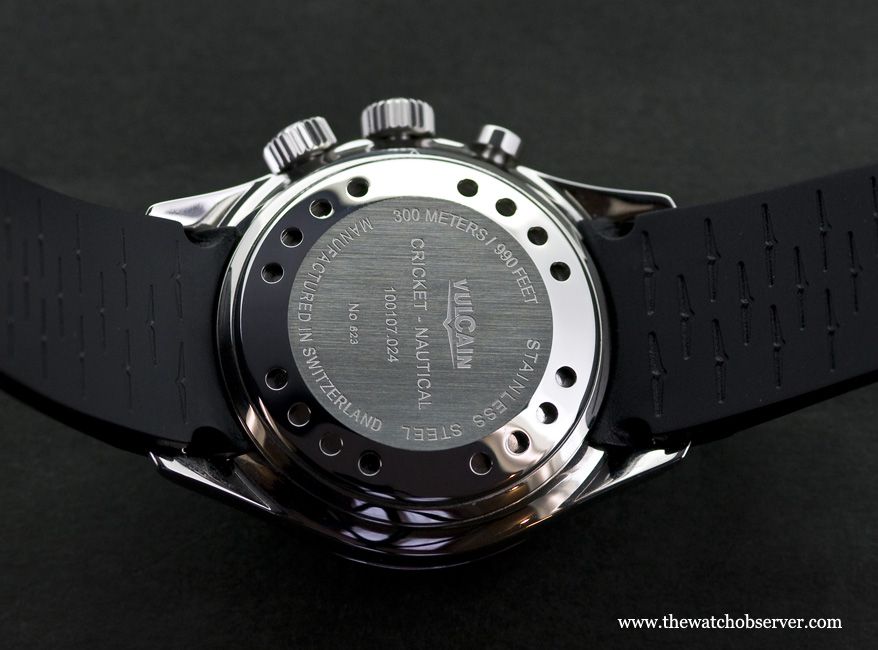 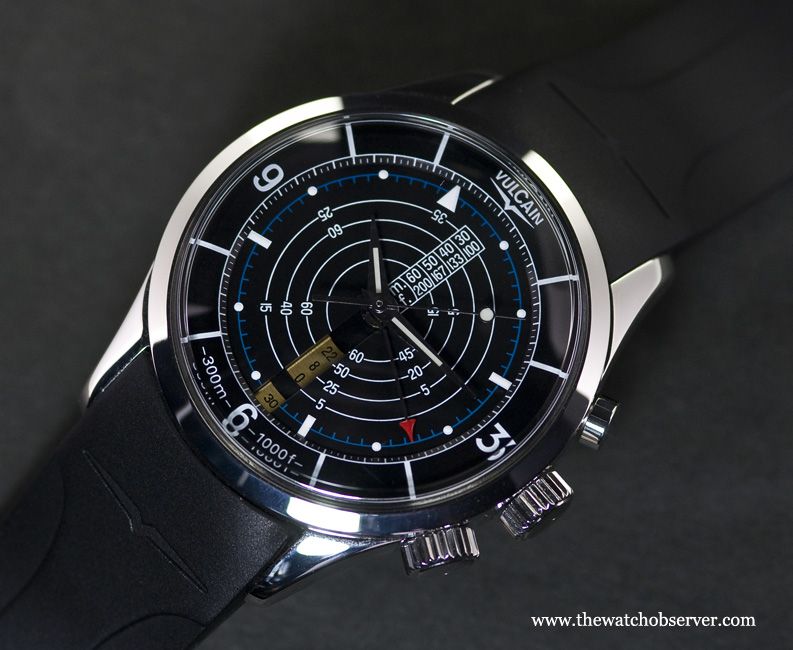 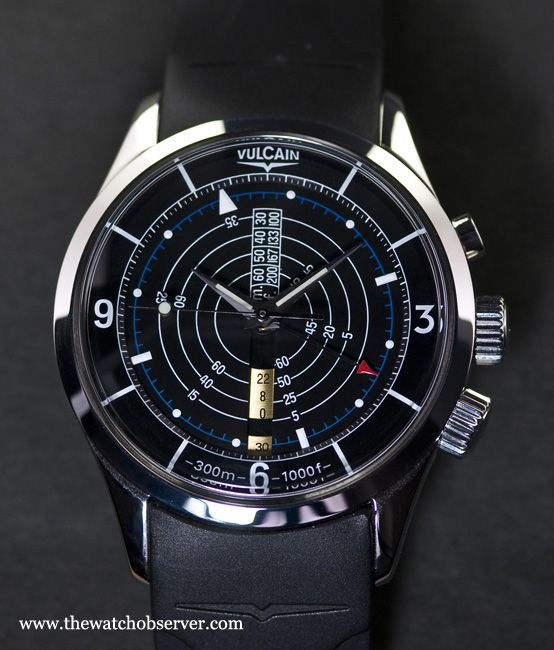 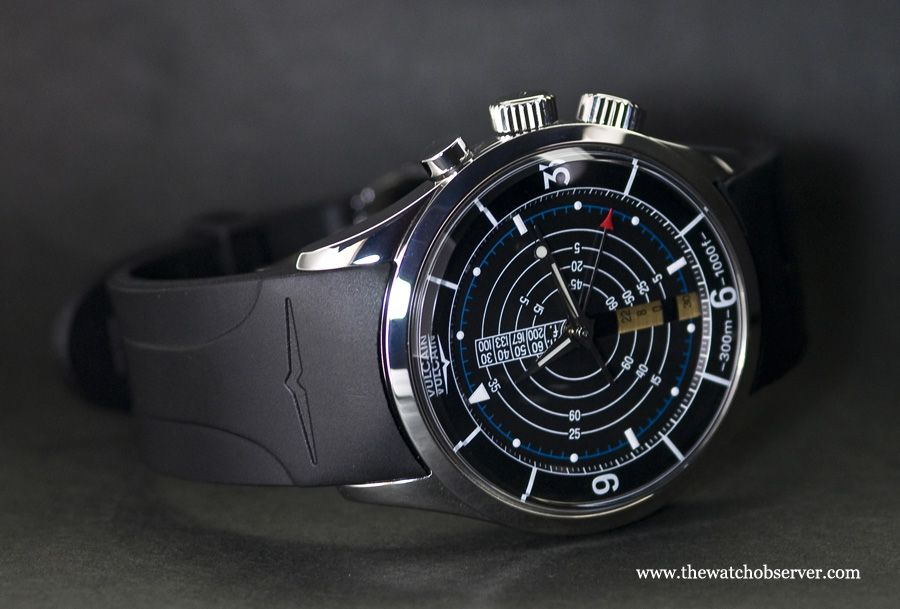 As the archetype of the sports watch world, the divers watches became unavoidable in the second half of the 20th century, thanks in part to the success of the Rolex Submariner, and others such as Blancpain Fifty Fathoms.

It’s in this historical context that Vulcain decided to release its own diving watch, with a special twist: an alarm!

This was indeed a very practical and useful complication as it alerted the diver with an alarm when the oxygen reserves are running out.

The technical challenge for this feat was enormous: come up with a watch that was both water-resistant and at the same time fitted with an audible underwater alarm.
With the help of three experts including professional diver Hannes Keller, the challenge was met, and the project was completed in 1961 with the release of the Vulcain Nautical.

Set in a 42mm case (a more-than-respectable size for those times!), the Cricket 120 caliber was able to make itself heard, under water as well as in the open air…

To complete this picture of the perfectly-conceived diving watch, Vulcain fitted the Nautical with a clever decompression stages indicator table in the form of a disc rotating in the back of the dial.

A reissue faithful to the original

In 2002, before the current wave or reissues, Vulcain re-released the Nautical, identical in every aspect to the original 1961 model.

Indeed, why change anything, when the original model already had very modern dimensions, a level of water-resistance very much in line with today’s watches in terms of efficiency, and a simple, well-balanced figure without any wrinkles on it?

The caliber, renamed V-10, is also practically identical to the original, and like his older brother, beats are a rate of 18,000 vibrations per hour.
It’s equipped with two barrels on either side of the winding stem crown.
This way, when you wind the watch clockwise, you wind the barrel for the alarm.
Winding it the other way winds the barrel for the time display.

Regarding the alarm, the term “Cricket” was picked for a good reason!
The sound emitted by the hammer hitting the inside of the case is more reminiscent of  the sound of a buzzer than the melodic tone of a Westminster bell!
The effectiveness is guaranteed: even the deepest sleeper won’t be able to ignore this alarm’s tone! (watch and listen the video below).

One small regret, however: when the alarm barrel is not wound, the hammer hits the case at awkward moments with every movement. It sounds like there is a loose part of the movement moving around inside the case…a little unsettling the first few times you hear it!

On the comfort side of things, despite having a substantial thickness, the flared design of the case’s build gives a rather fluid visual impression, reinforced by a magnificent plexiglas dome!
In this case, we can’t fault Vulcain for having sacrificed the glass cover on the alter of modernity: the hesalite glass was not replaced with a sapphire, to the likely great joy of the fans of vintage and that unique transparency that come from hesalite.

The rubber strap is itself perfectly integrated with the middle case of the watch, even if it might not fit perfectly on smaller wrists. However, it is quite comfortable, and the folding clasp – the only disappointing departure from the historical standard – is both simple and practical.

Lastly, the legibility is good without, however, being optimal – but it is more than sufficient for frequent use.

Vulcain offers us quite a charming piece with this faithful reissue of the Nautical.
First, because wearing a new 1961 watch provides a very special and unique sensation.
And second, because this model has undeniably aged very well relative to its technical characteristics and its figure.
This watch could be Vulcain’s equivalent of the Omega Speedmaster: an inescapable timeless piece!