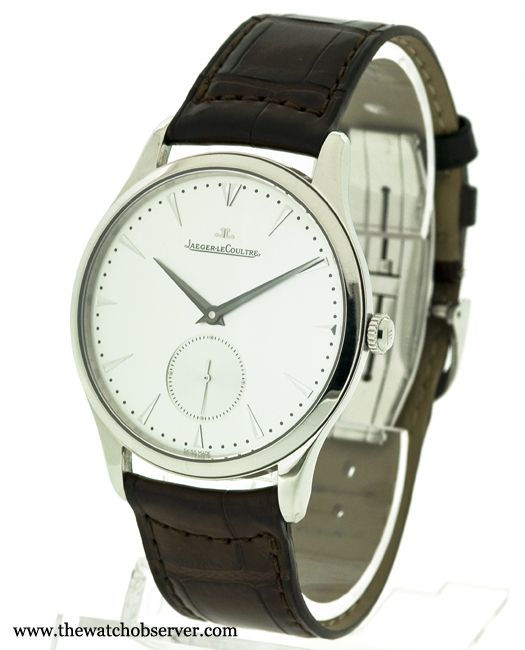 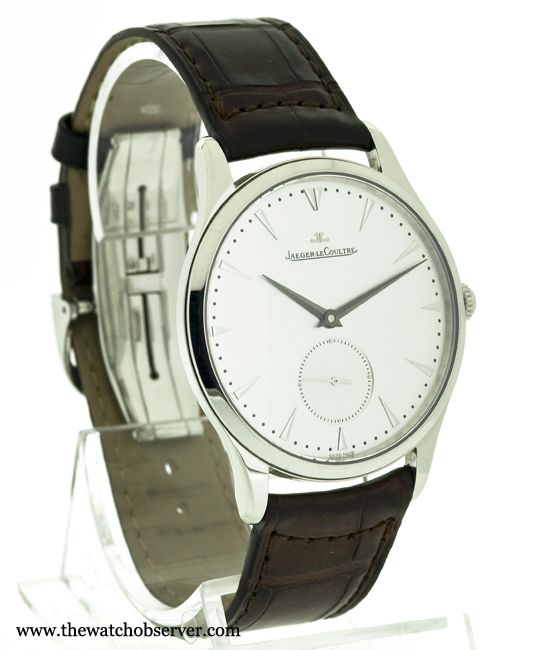 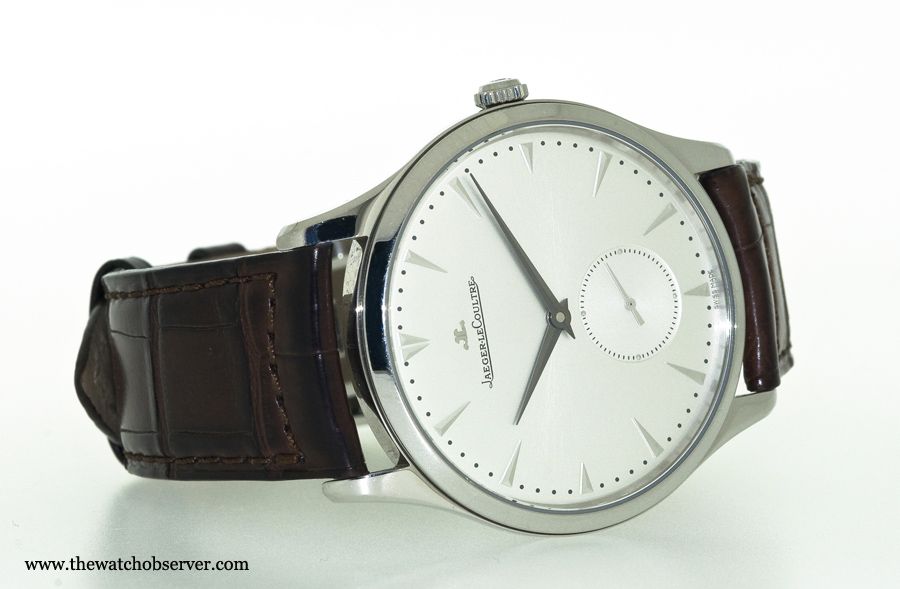 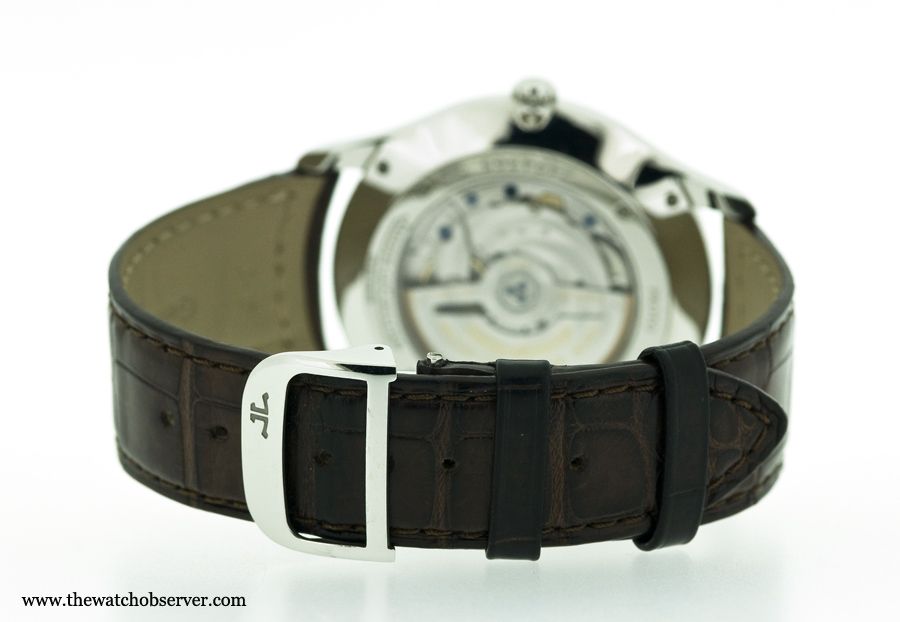 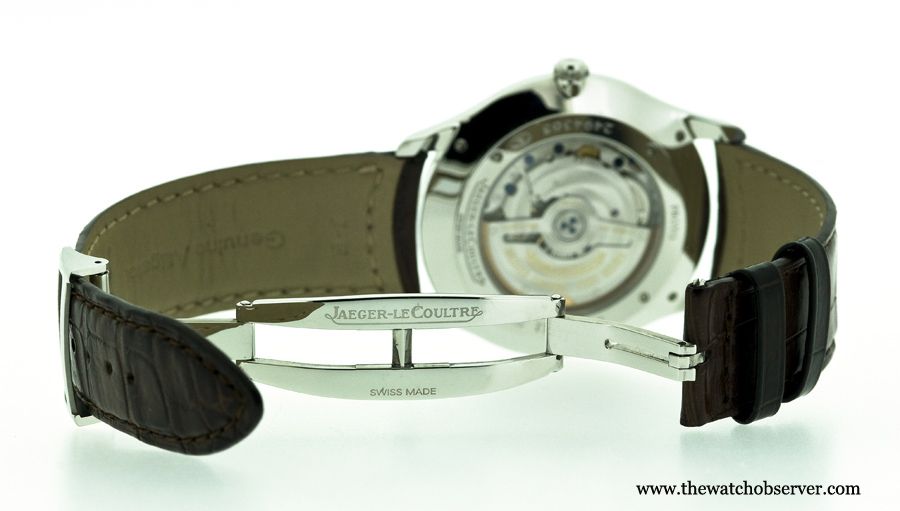 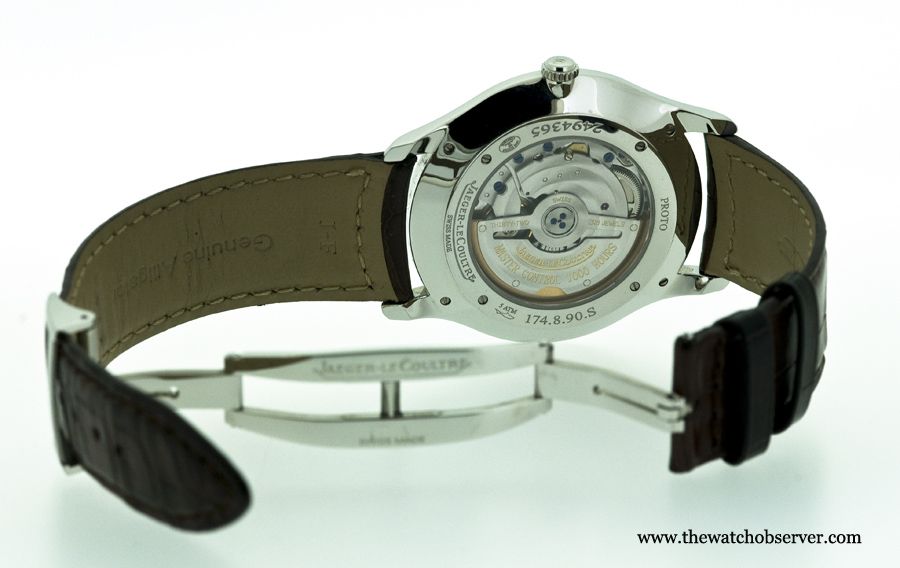 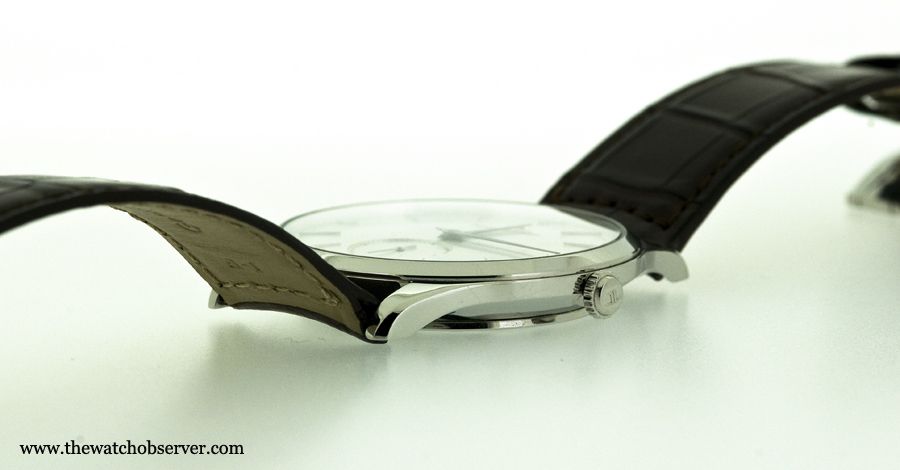 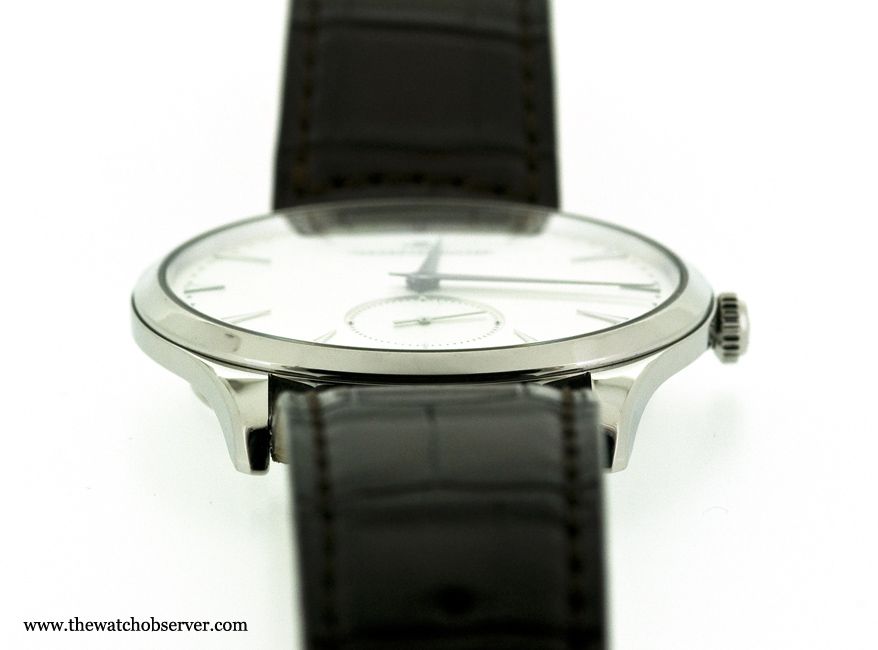 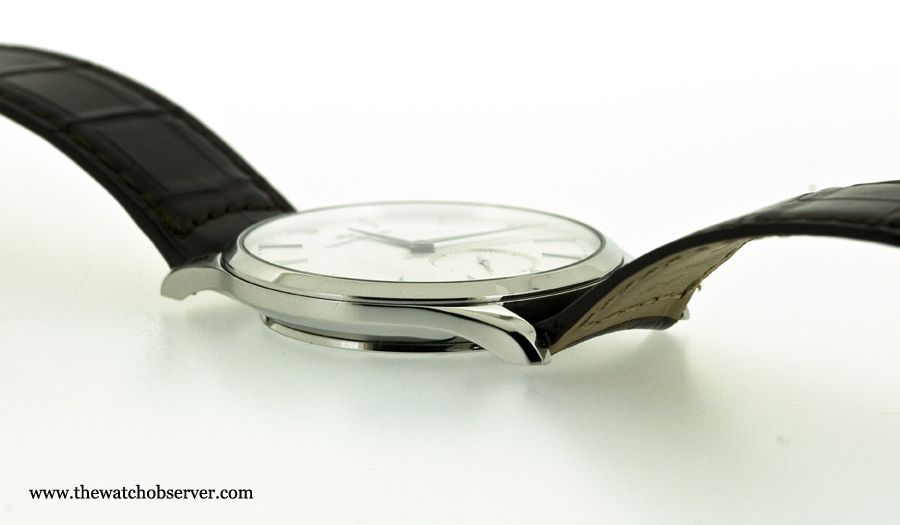 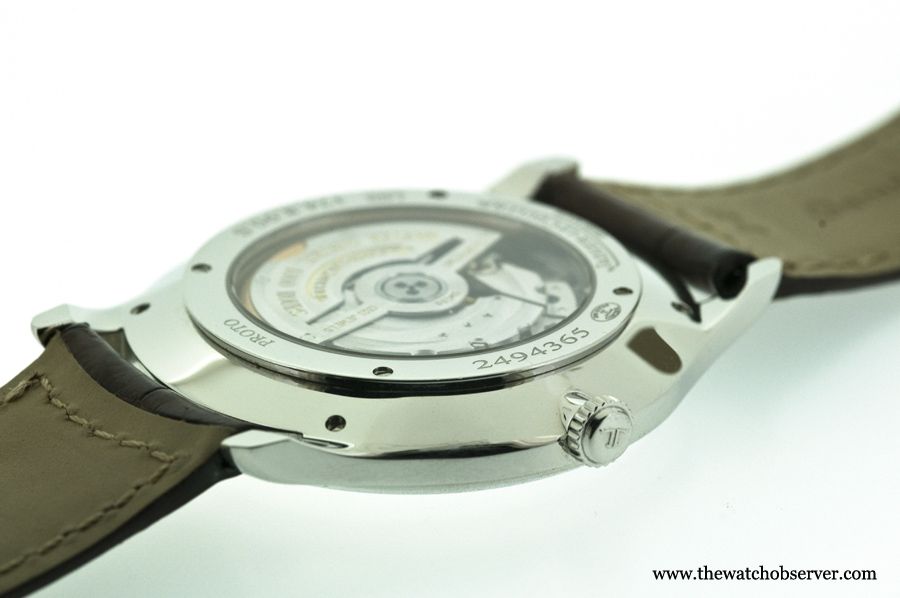 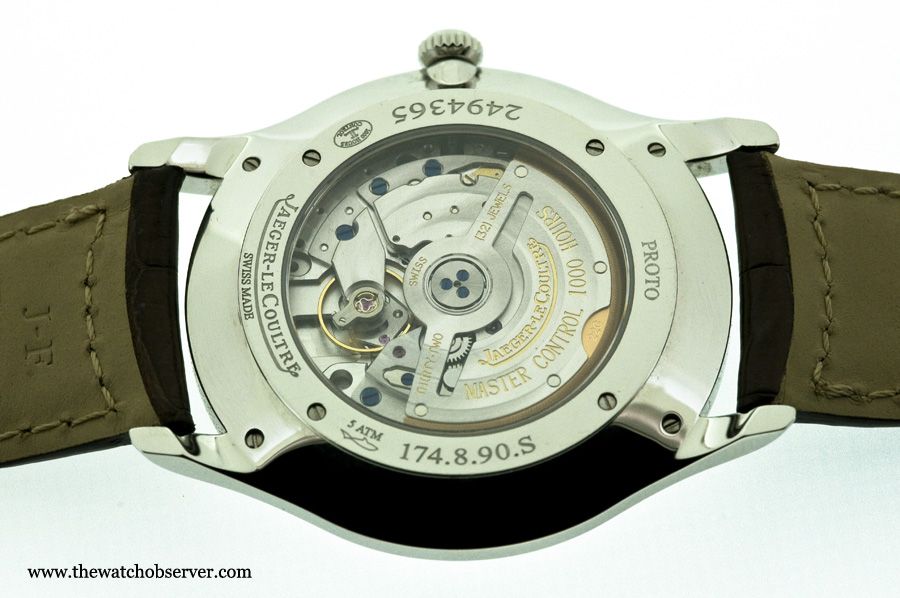 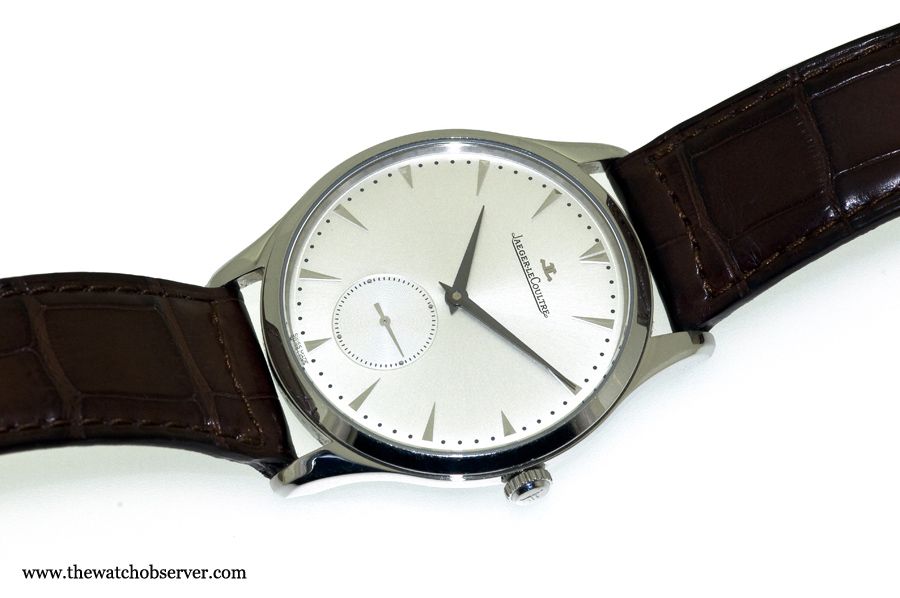 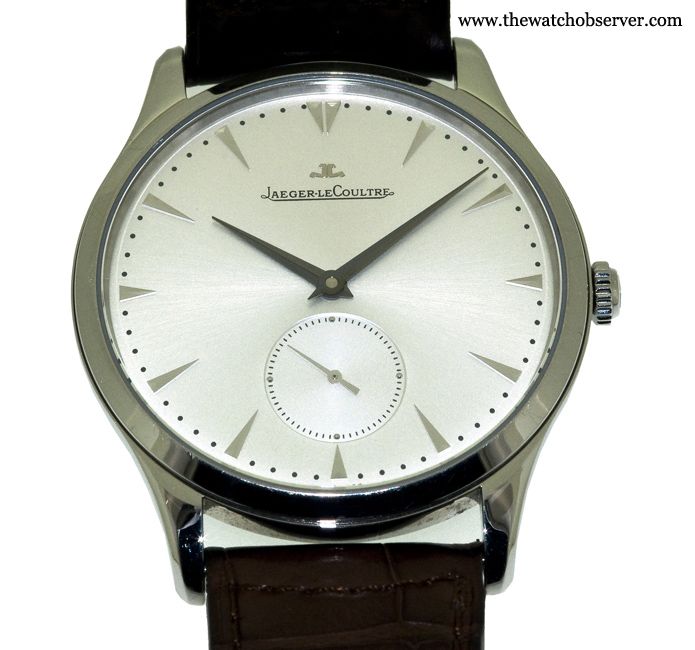 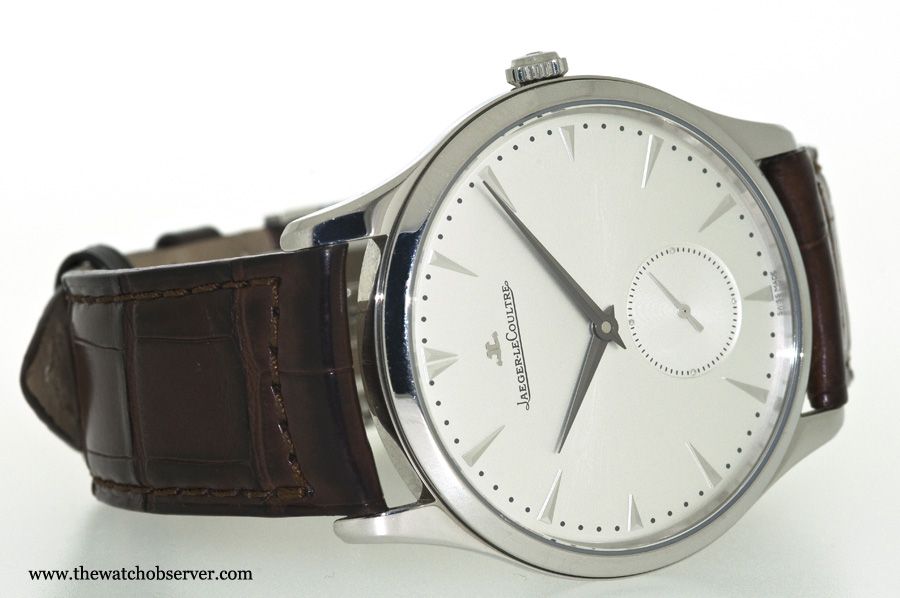 To successfully design a watch that is both dressy and classic is not an easy feat.
Here, Jaeger-LeCoultre has succeeded in giving a real identity to this model while avoiding the obvious formulas.

First, it does so by giving it “unusual proportions” for this style of timekeepers.
In fact, the watch has a 40 mm diameter – a relatively large diameter for a dress watch – with less than 9 mm in thickness, which is very little for an automatic watch.
This is still far from the records set by the brand in term of thinness, as demonstrated by the Master Ultra Thin for example, which is 4.2 mm thick.

This lack of thickness is coupled with an outlined case, with generous curves, which makes its outline look more slender.

The nicely drawn lugs fit perfectly with the shape of the wrist and provide a harmonious finish to the case.

Finally, thanks to this balance in the proportions, you do not get the sense of fragility which can sometimes be the case with other thinner watches.
Rather, this Jaeger-LeCoultre has an aura of sturdiness behind its delicate appearance – but even with these proportions, it’s still not a Master Compressor Diving Navy Seals!

Then, under a domed sapphire crystal, the large dial appears. It confirms the case’s esthetic inclination by using thin lines as well.

The dauphine hands are polished and rhodium-plated, the beveled arrow markers are glued, and the sunray-finished dial, all contribute to the feeling of great finesse and elegance you get from the watch.

You’ll also be thrilled to see that the care put into this Jaeger-LeCoultre’s esthetics does not come to the detriment of its legibility.
It is in fact excellent, thanks in part to the contrast provided by the different finishes for the hands and dial.

The former reflects light while the latter absorbs it, resulting in a changing appearance that depends on the intensity and angle of the ambient light.

The dial is itself practically free of any markings. Only the logo and the brand name appear on it.

This Grande Ultra Thin’s stripped down dial is a delight of simplicity and harmony to the eyes.

Equipped with a brown crocodile strap, the watch has an elegant look, with a touch of laid-back, and will be quite comfortable to wear, regardless of the size of your wrist.

Let’s finish the introductions with the caliber, visible through a see-though bottom.

Since the 145 caliber at the beginning of the 20th century and without any interruptions to this day, the Grande Maison has developed an acknowledged expertise in thin calibers, whether they be manual or automatic.

This Grande Ultra Thin is thus powered by the latest generation, the Jaeger-LeCoultre 896 caliber.
It’s an automatic movement that is less than 4 mm thick. 28,800 alternations per hour, a 43 hour power reserve, successful passing of the “1,000 Hours Control”… The prowess of the slenderness is not achieved at the expense of reliability or performance.

To top it all off, the movement’s finish are cleanly executed. Most notably, the circular Côtes de Genève of the openwork rotor that perfectly extend those of the bottom plates.

This Jaeger-LeCoultre Grande Ultra Thin is without any doubt a great success.
Its large dimensions, its thin proportions, and its movement give it a real personality that will please those who look for an elegant and refined watch which subtlely opts for the path less taken.