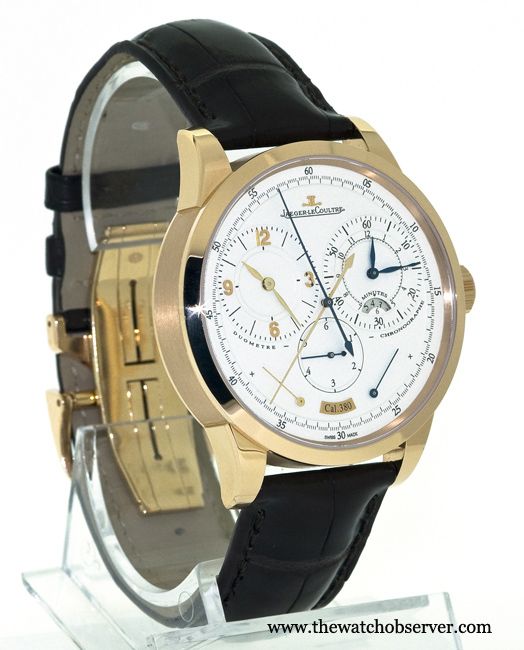 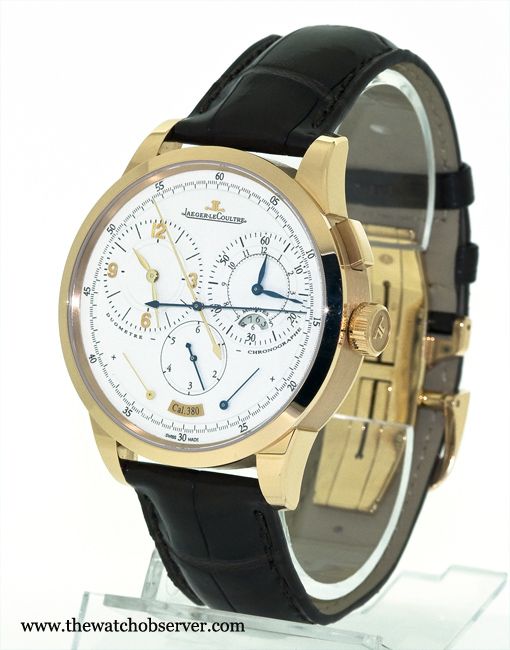 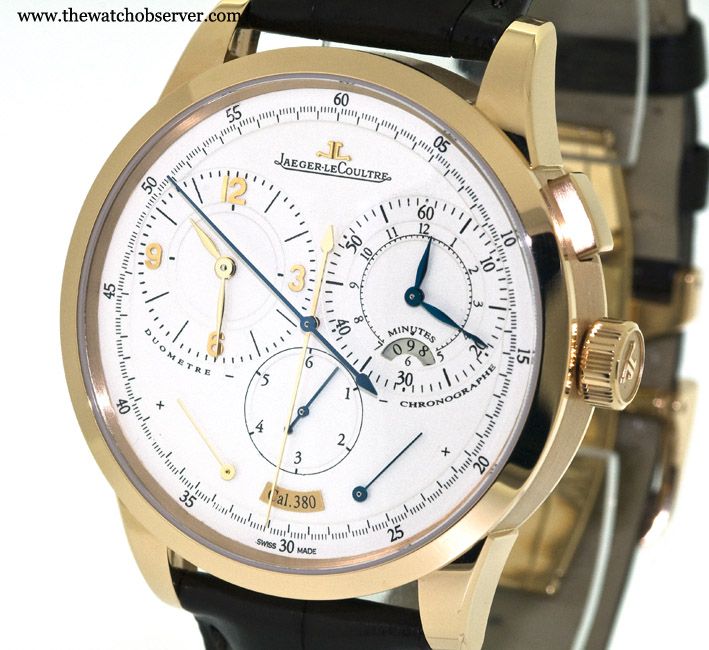 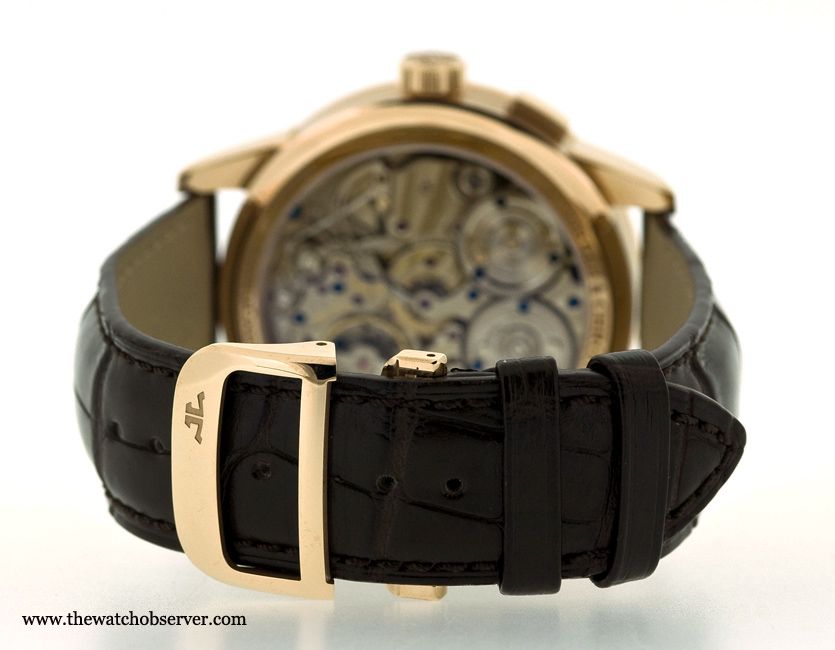 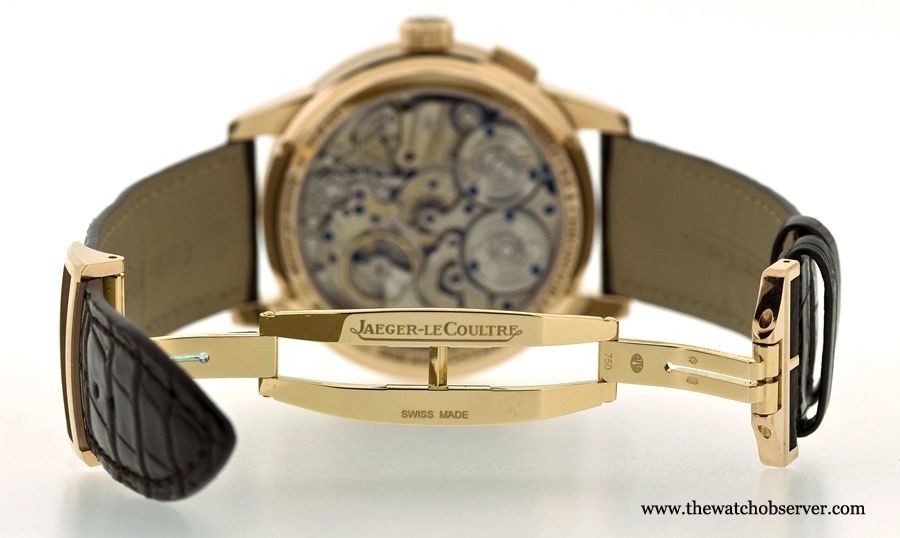 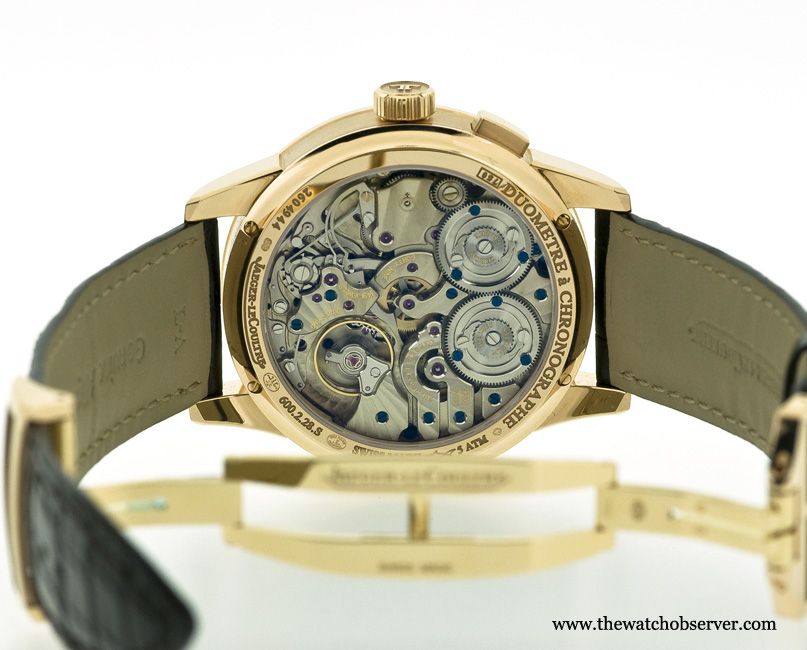 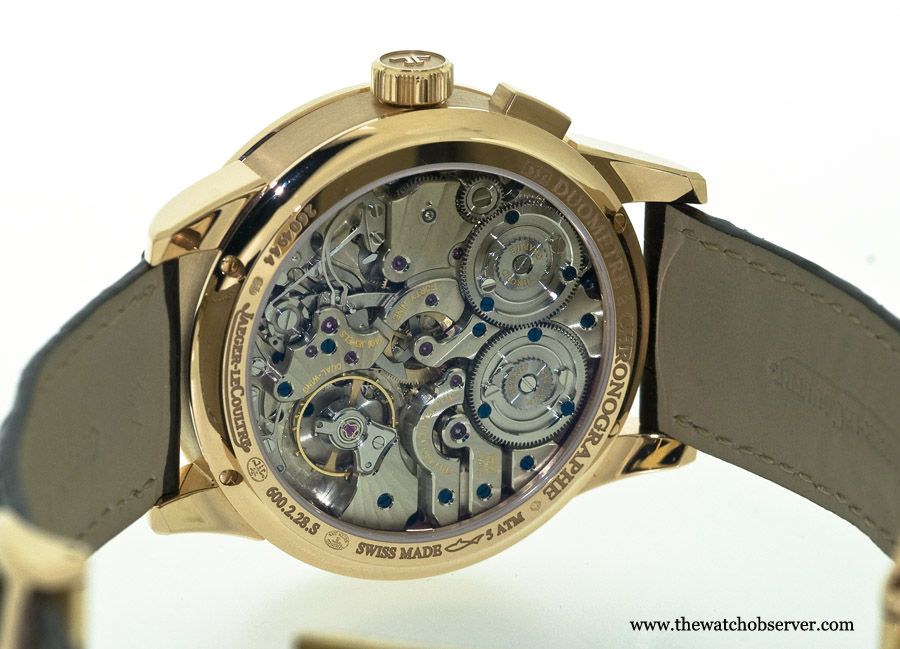 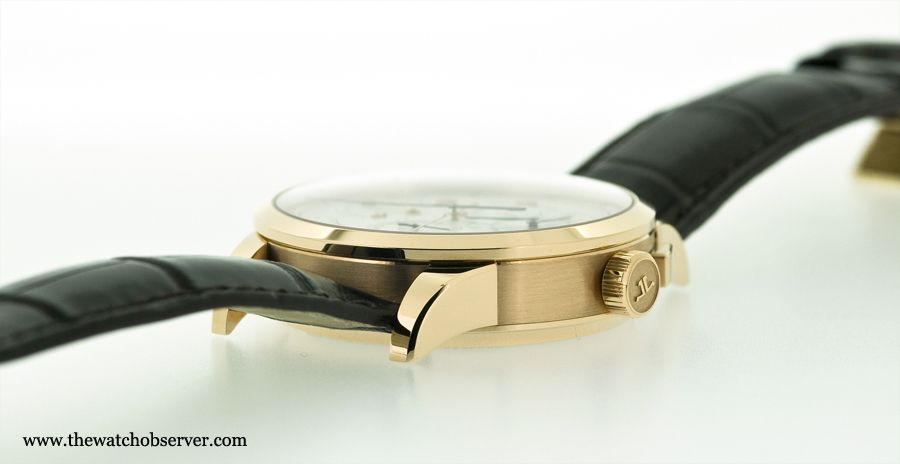 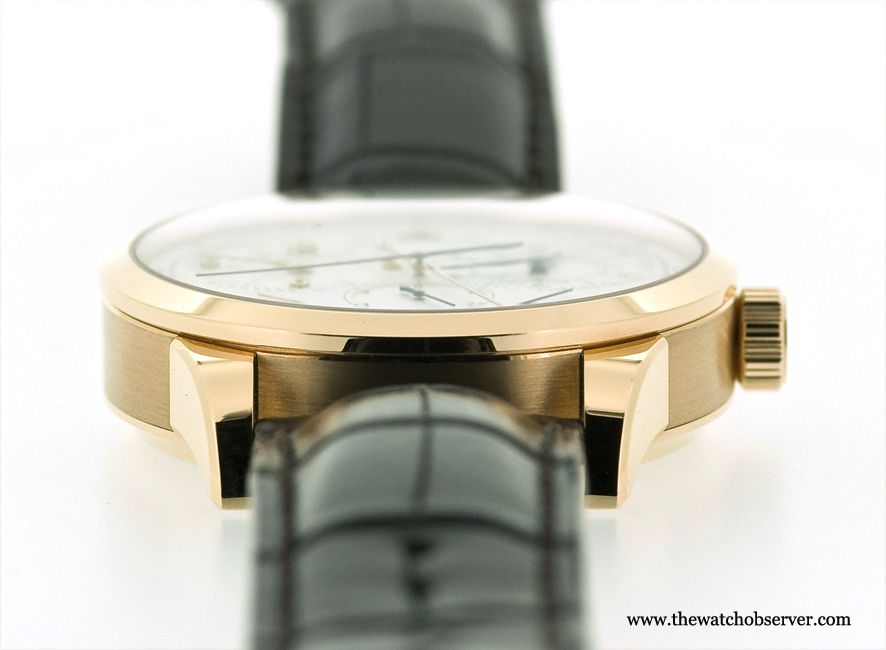 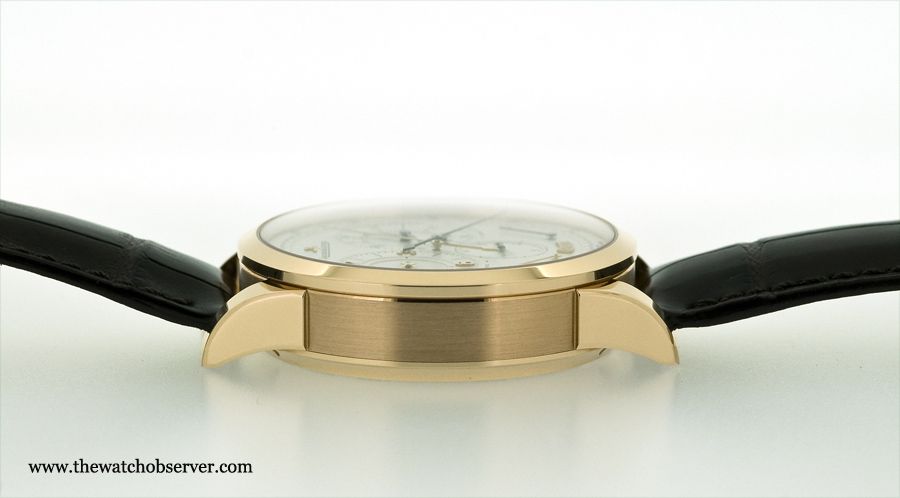 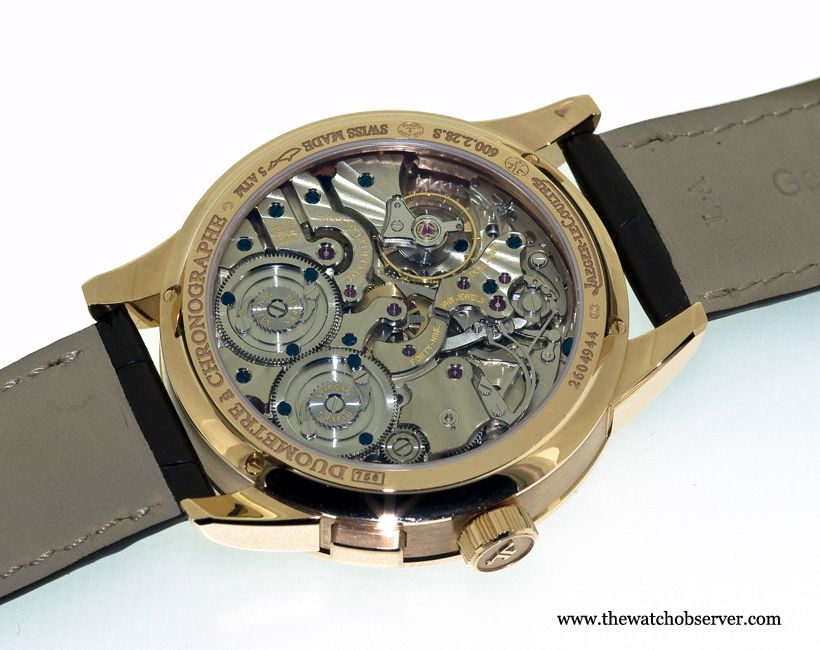 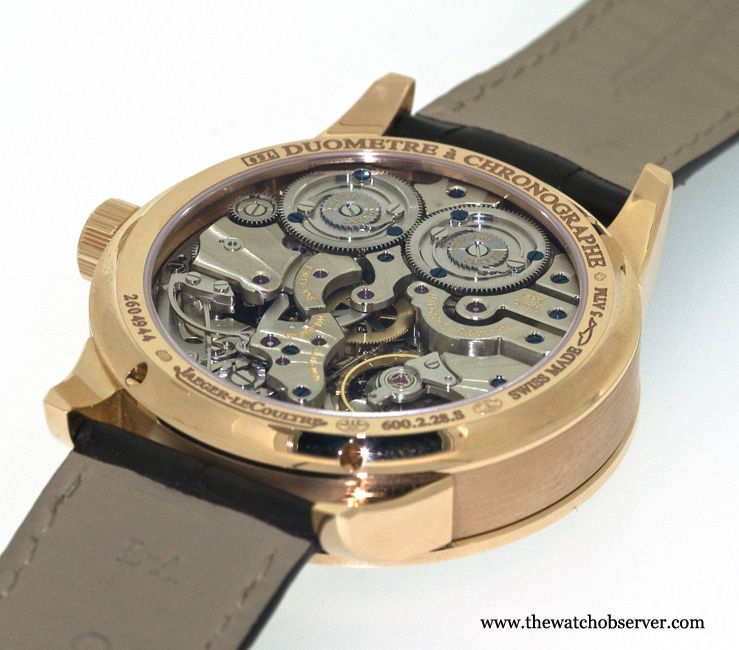 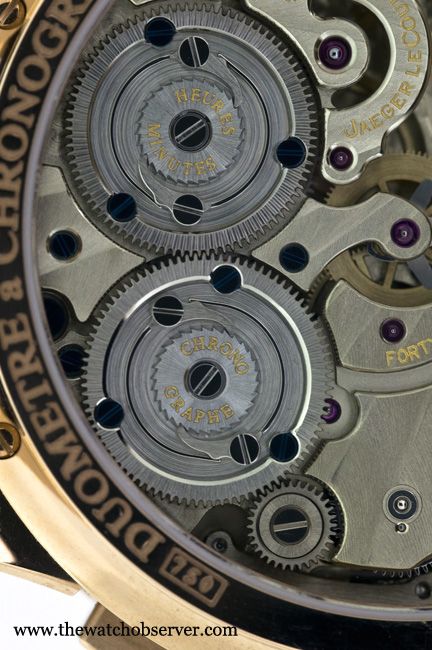 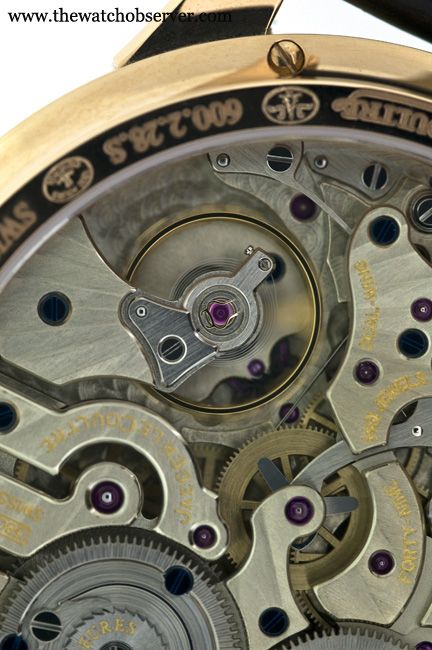 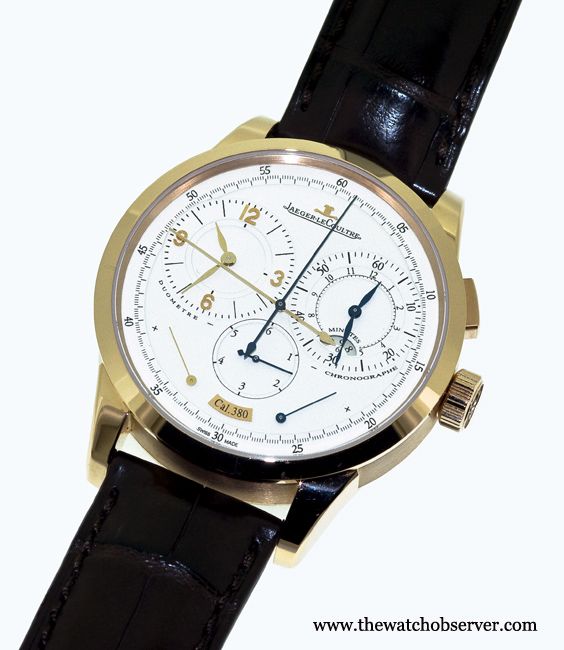 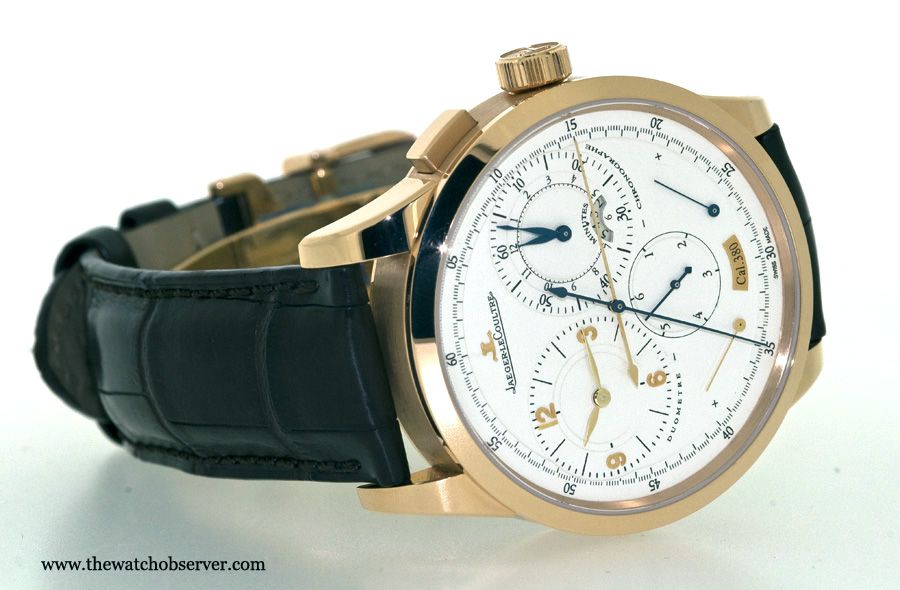 As soon as you pick it up, it looks like you are on familiar territory.
The classic Jaeger-LeCoultre codes and the feeling of high-quality craftsmanship are all present.

Then upon closer inspection, you discover that you are in fact dealing with a watch that is anything but ordinary!

A caliber for passionate fans of watchmaking

For once, let’s begin the review with the movement, the Dual-Wing 380 Caliber.
Its concept is apparently simple.
It is made up of two independent mechanisms and one tuned regulation organ to completely get rid of the chronograph’s disturbing effect on the hour.

While this looks simple in theory, the implementation has required starting from scratch to come up with innovative solutions, such as the managing of the independent sources of energy and their connection to the tuned regulation organ.

The energy of the two mechanisms is thus stored in two separate barrels that empty themselves independently of one another.
The question surrounding the issue of rewinding then comes up: should there be two crowns?
The solution used is rather elegant: the rewinding is done using the same crown, one way for the hour, the other way for the chronograph, with the barrels in sequence on the crown’s cogs.

The most surprising thing is the total absence of a clutch.
Traditionally, the chronograph’s mechanism is used in tandem with the hour’s mechanism to make it work.
That generally doesn’t happen without problems, such as small skips at the start or some reverberation on the tuned regulation organ with a loss of amplitude for the balance.

Here, the wheel for the jumping seconds placed right behind the regulating mechanism and permanently rotating ensures the first step of the hour’s going train.
And when the chronograph is triggered, an ingenious system allows it to also ensure the driving of the chronograph’s mechanism, without any disturbances on the balance.

These two major characteristics find their place in the heart of a coherent architecture that is informative of the movement.
Indeed, this movement is very explicitly designed to allow a clear distinction between the watch’s two main functions, time and chronograph, located on either side of the movement.

This architecture is enhanced by an acute attention to details that goes so far as to label the function of each barrel, or to subtlety distinguish the Côtes de Genève of the hour’s bottom plate from the chronograph’s.

The movement is also designed for maximum visibility, with the size of the bottom plates limited in such a way as to allow a clear view of the movement with astonishing depth.
The most spectacular aspect is the chronograph side, which not only reveals the column wheel, but also all the command cams, and even the zero position heart mechanism.

You get the picture: this movement is fascinating, particularly for the technical geeks.
The aesthetics also leave nothing to be desired.
The finish is of the highest level, and the bevels, stipplings, and Côtes de Genève all are perfectly executed.
The overall look of this caliber is remarkable, and it raises the bar quite high with its casing.

The Duomètre’s case is rather large for such a dressy watch (42mm in diameter, and almost 14mm in thickness) but still reasonably so, given the watchmaking challenge that it poses, and today’s tendency to make even larger watches. 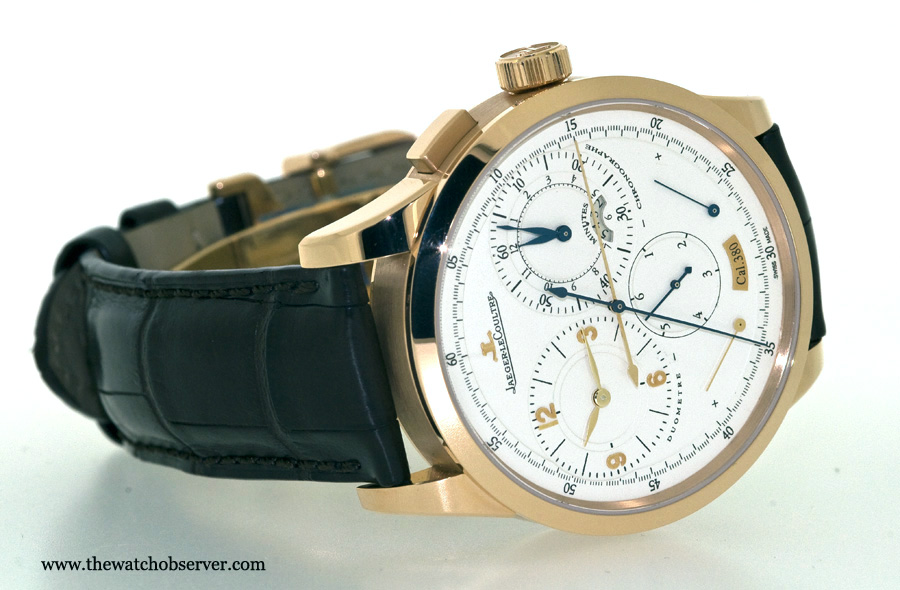 The version of the model we tested has a pink gold case.
It has a straight, finely brushed case middle, giving it a nice, soft look.

The lugs are soldered and polished, like the bezel or the outline of the sapphire bottom: the whole emphasizes and slims down this Jaeger-LeCoultre’s silhouette.

The overall look is elegant and rather discreet, an impression that is reinforced by the retro feel of its single push-button.

The dark brown crocodile strap and the folding clasp nicely complement the rest of the watch.

The Duomètre looks substantial on the wrist due to its size and weight, and yet it remains very comfortable to wear.

This Jaeger-LeCoultre’s dial is balanced as it fluctuates between modern and classicism.

Its texture is grained, and its various subdials slightly concave.

The overall composition is similar to the caliber – split in half, with one dial on the left with three golden hands, and the other on the right being a chronograph with blued hands.

Both subdials are quite readable and provide an excellent reading of the time or the chronograph, even if the position of the hour forces someone wearing the watch on their left wrist to completely pull the watch from under their sleave to read the time.

One small disappointment, though: Jaeger-LeCoultre added a small window at 3 o’clock  acting as a counter for the minutes of the chronograph and an alternative way to display that information.
It’s completely redundant and not more readable than the hands above it, so its omission would have had no adverse effect on the readability of the dial as a whole, but instead would have improved the overall balance of the dial.

Let’s finish this review with a field test.

Its soft and precise trigger instantanuously starts the jumping seconds. While the ability to read time to the nearest 1/6 of a second is unnecessary, the display of this jumping seconds mechanism is quite captivating – almost hypnotic.
Judge for yourself by watching the video below!

The blued seconds center hand and the dial on the right display quite clearly the time on the chronograph.

A second push stops the chronograph, and finally, one last, slightly longer push resets the jumping seconds to zero.

To see this Duomètre at work (or go HERE if you cannot play the video):

This Chronograph Duomètre by Jaeger-LeCoultre is an original and innovative technical  creation.
But this is not achieved to the detriment of elegance or discretion.
Whether you are a fan of the mechanics of watchmaking, or simply looking for something different, this is definitely one of the most fascinating watches you’ll encounter today!