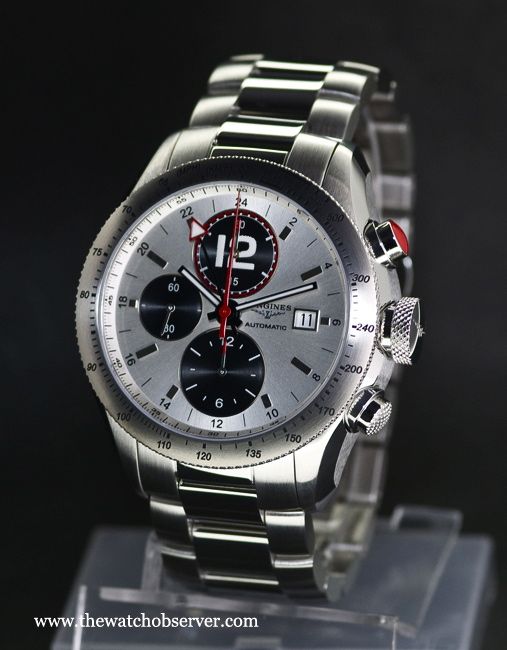 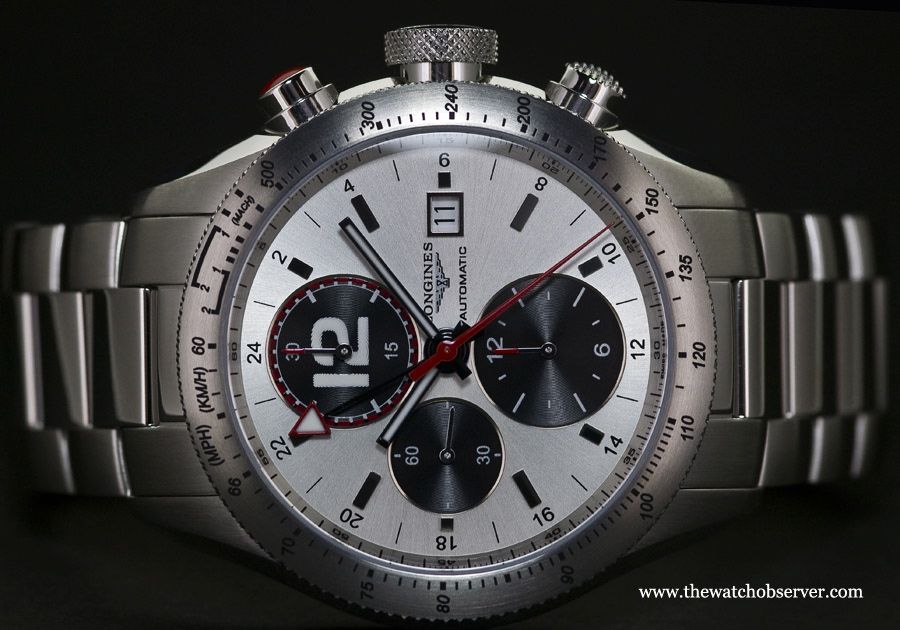 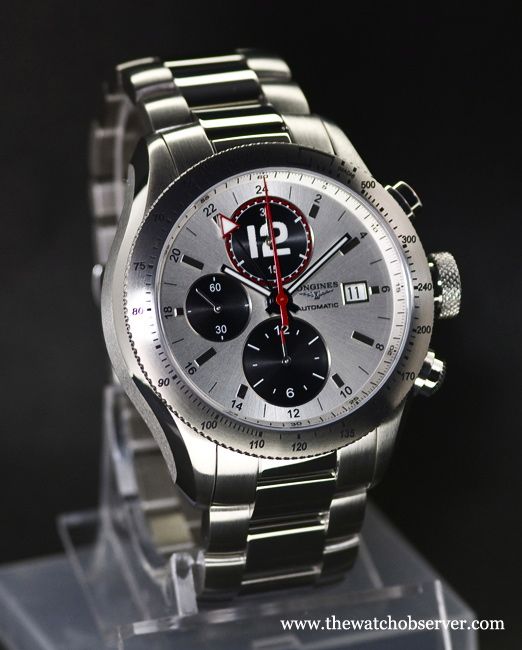 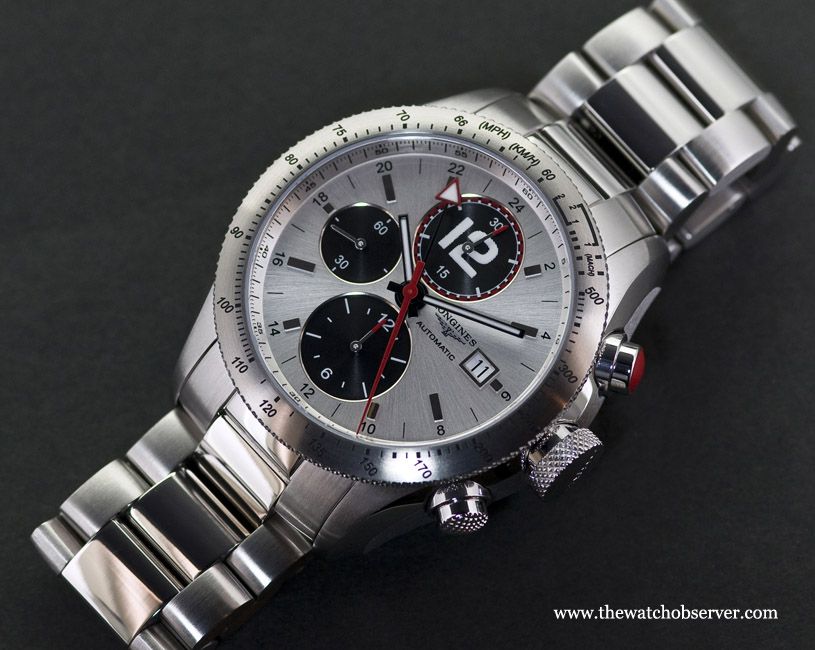 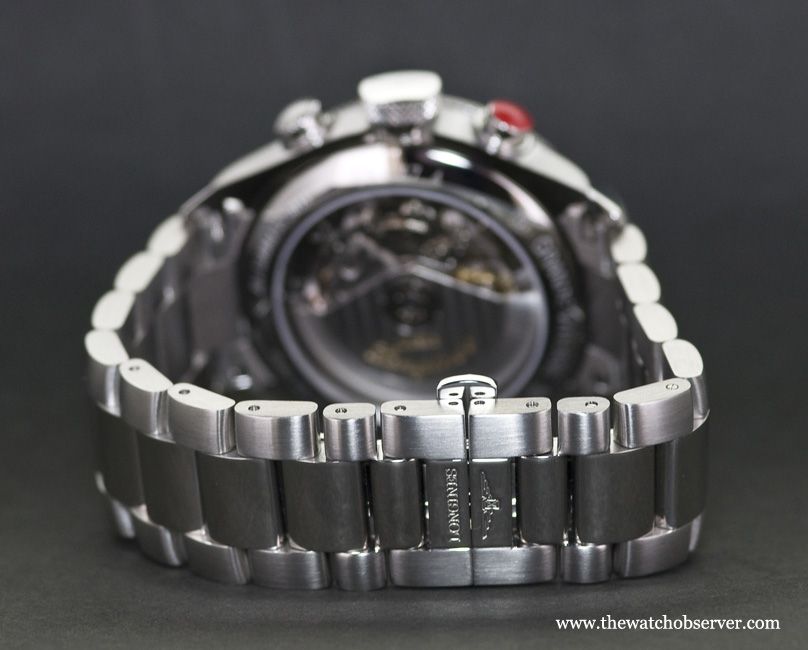 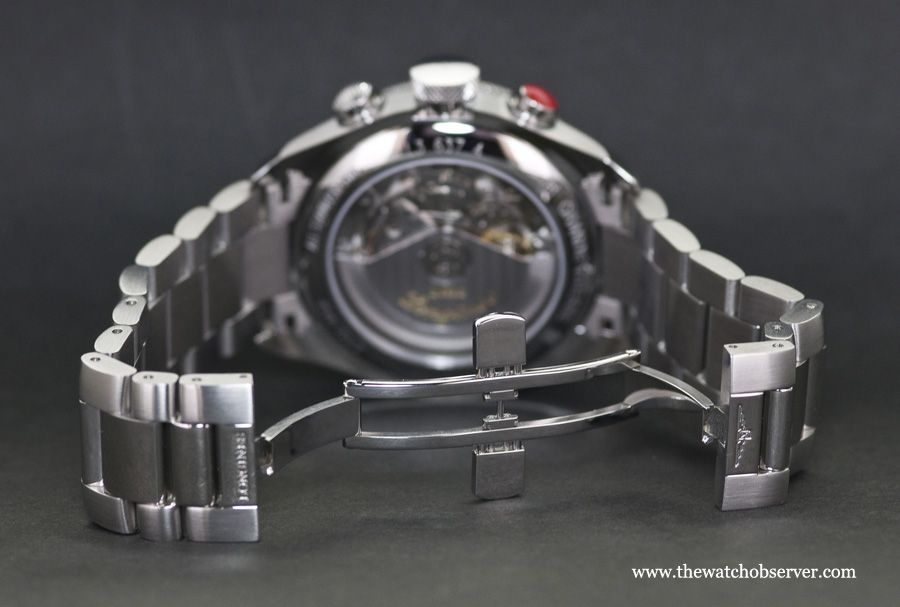 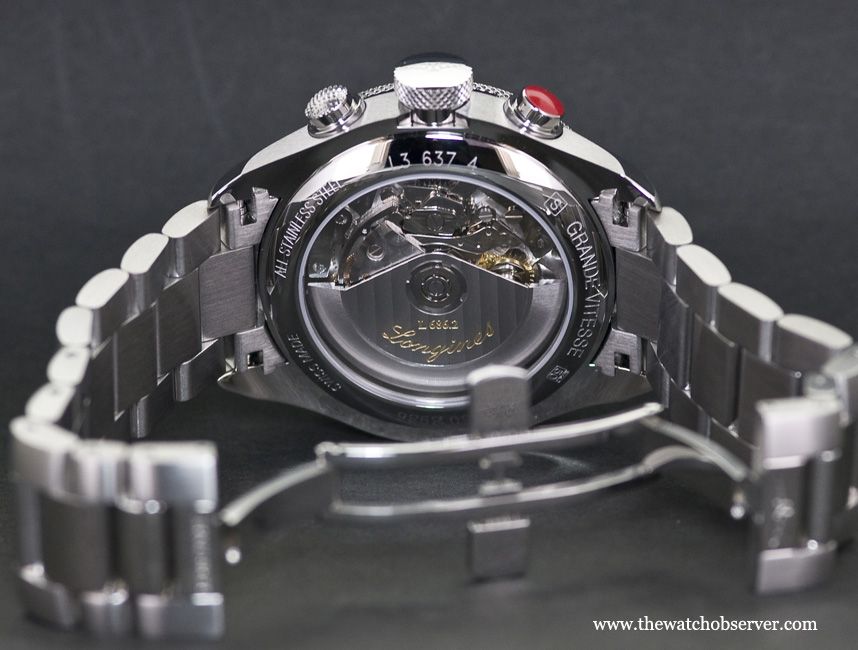 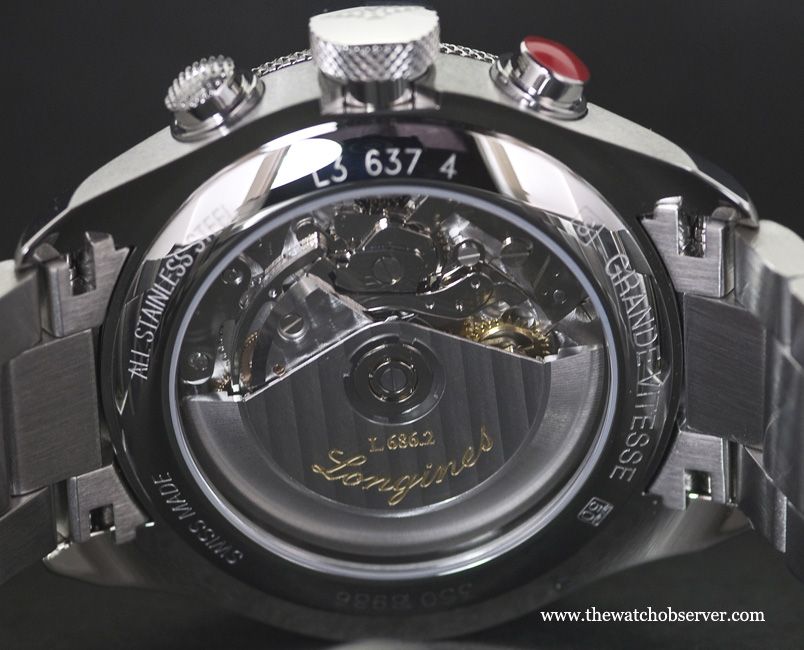 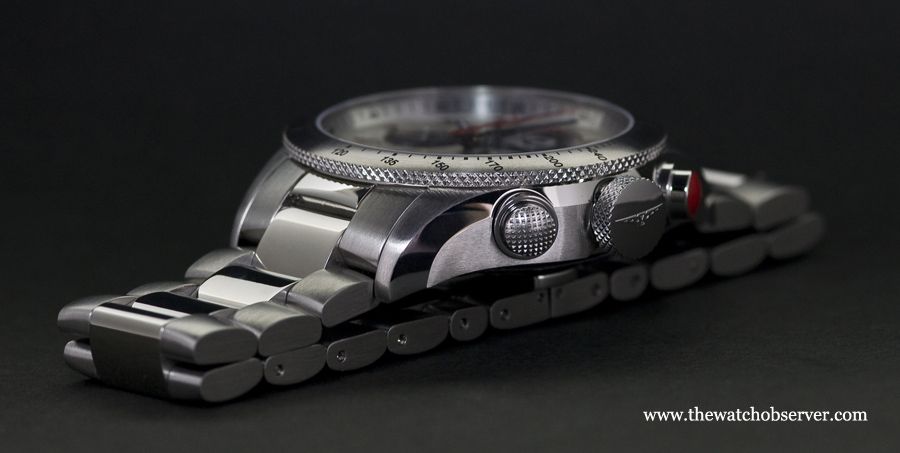 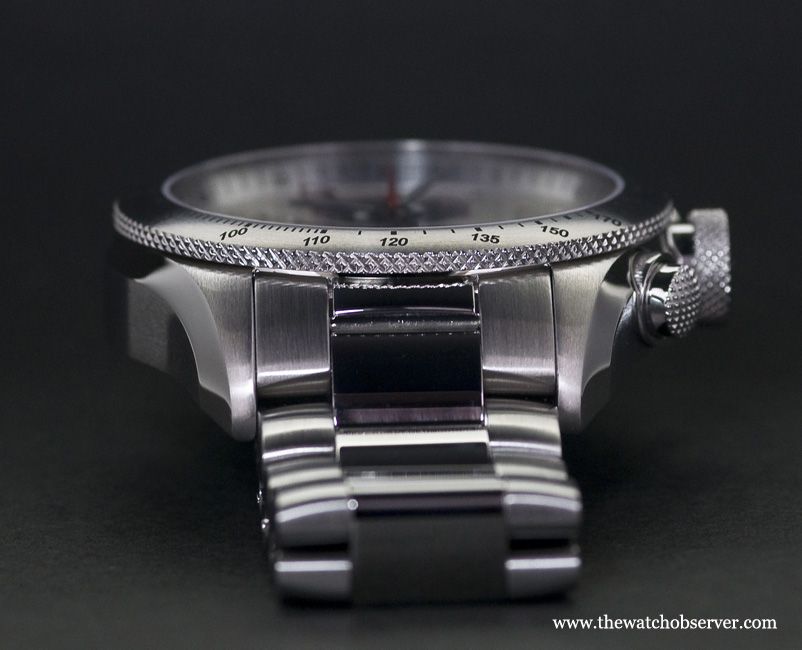 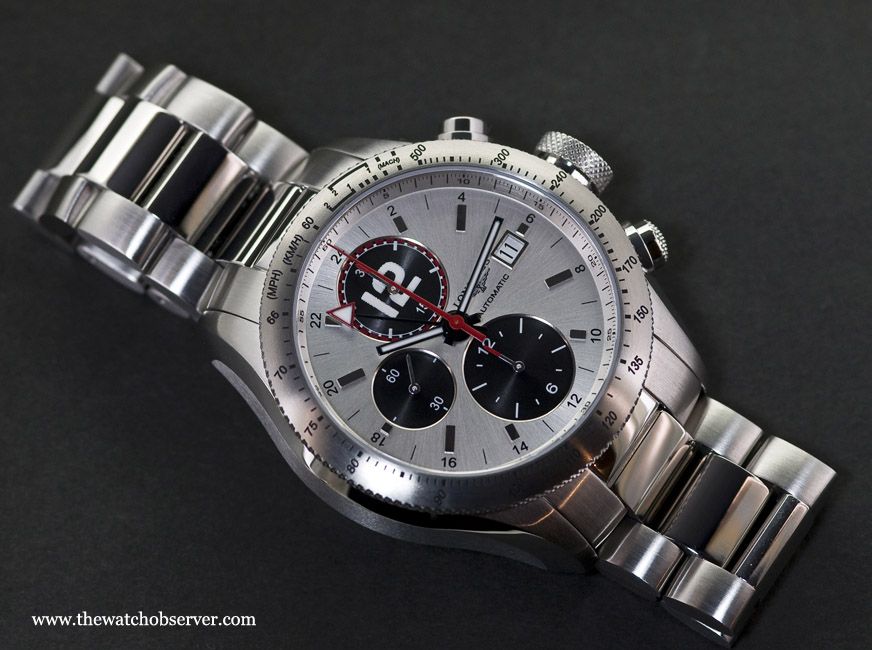 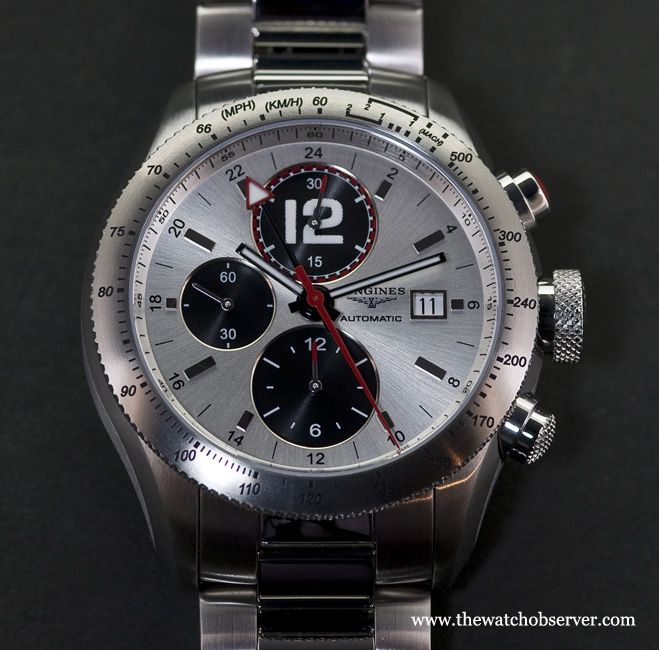 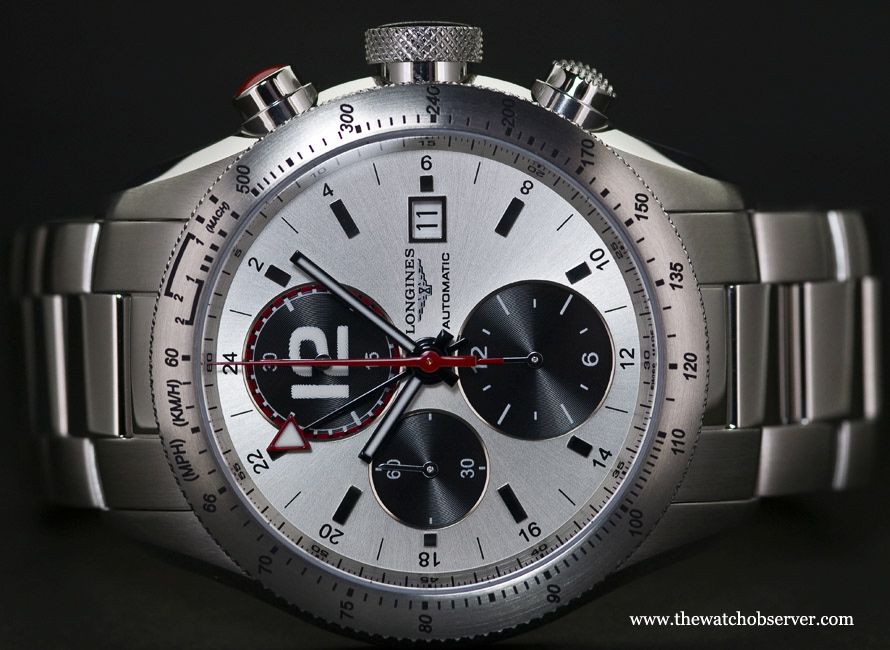 In October 1997, the Thrust SSC reached the speed of 1,227.985 km/hr over a distance of a mile (1.609 km) in the Black Rock desert in Nevada, thus officially breaking the sound barrier for the first time!

This incredible record puts to shame the Budweiser Rocket’s claims that already boasted in 1979 to have broken the sound barrier during an unofficial attempt…
We are indeed very far from the record of 293.73 km/hr (comical in retrospect) set by Burt Monro on his 850cc Indian back in 1967…

Since all these records were measured in miles per hour (MPH), the Longines Chronograph GMT GrandeVitesse offers a MPH scale on its tachometric bezel along with another one in km/h ending with the counting of Machs (no less!), the unit of measure for supersonic speed.

All this for pleasure, of course!
Because in addition to the probability of finding oneself behind the controls of such a vehicle being minuscule, by the time you’re done activating the chronograph, the mile is almost over anyway…
We won’t even mention the fact that letting go of your supersonic vehicle’s controls to activate the chrono might have disastrous consequences…

A chronograph that exudes power

Let’s leave those American salt lakes behind and focus on this Longines.

The first good impression: with its substantial weight (203 grams still), the thick case along with the large steel strap sit comfortably on your wrist and vanish from your mind once your arm gets used to it.

The surface treatment of both the case middle and the strap, alternating between polished and brushed surfaces, along with the lugs’ curves going down on the wrist, produce an overall look with flexible and balanced lines, while emanating a sense of power and robustness.

The chronograph’s push-buttons and the crown accentuate the “technical instrument” aspect of the watch, without being excessive: the head of the release’s push-button is red, and that of the reset is checkered, same as the crown’s perimeter, thus ensuring an easy grasp.

We also find this grid pattern on the bezel’s circumference.
While the aesthetic effect is positive, it serves no practical purpose since the tachometer bezel is necessarily fixed.

The activation of the chronograph function of this Longines requires a firm and relatively long push (proportionately-speaking), and the same is true for the reset.

We see here the characteristics of the ETA (ex Valjoux) 7754 movement: reliability and sturdiness – which are a perfect fit for this type of instrument.

The see-through case back lets you see the movements of the chronograph’s cams, and the spinning of the rotor ensuring the functioning of the automatic winding mechanism.

The rotor’s surface treatment is of a high quality: Côtes de Genève, sunray finish, Longines gold engraving, and circular-graining of the plates.

The readability is itself very good, day or night. 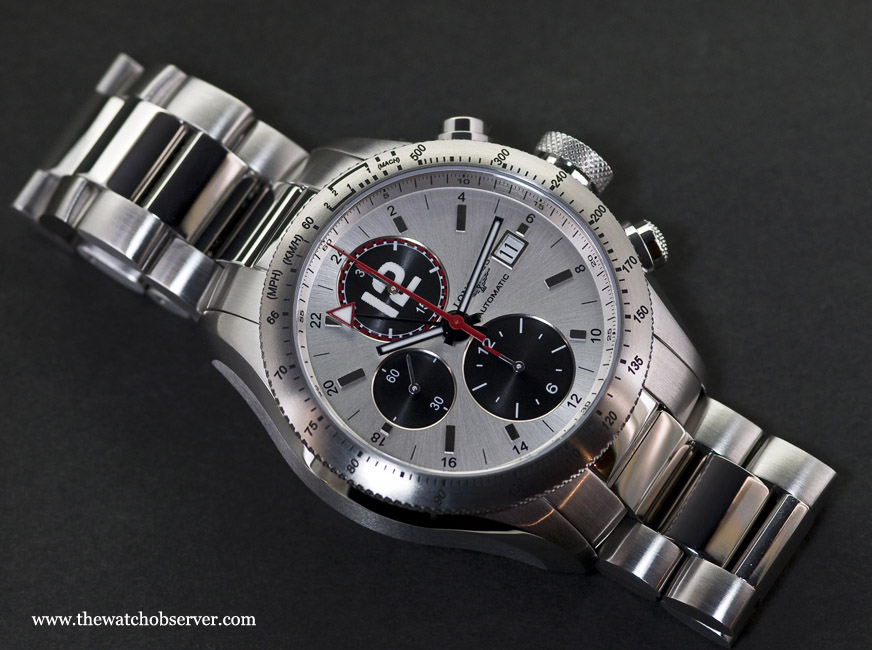 The large red hand for the chronograph’s seconds has its own dedicated indexing on the outer flange of the internal bezel.
It’s a real improvement for the accuracy of the time countdowns, compared to the normal graduation of the minutes (which has only four markers).

The steel hands of the chronograph’s counters (the one for the minutes located at 12 o’clock, and the one for the hours at 6 o’clock) have red-painted tips.
The visual aspect is a success. However, had those hands been a little bigger, it would likely have further improved their readability.

It’s worth noting, to our great delight, that the countdown of the minutes happens with very distinctive jumps, and not with a continuous movement, as is too often the case with chronographs.

To end this tour, this Longines GMT function (2nd time zone) stays discreet while remaining visible, and doesn’t get in the way of reading the other indicators. This function works with a luminous red hand that electrifies the dial. Its setting with the crown is also easy.

With this Chronograph GMT GrandeVitesse, Longines offers us a sturdy watch that remains nevertheless elegant.
With its high level of production quality, and relative affordability, this watch will easily seduce the connoisseur looking for practical watch that is virile and wearable on any occasion.